Wow, Walgreens sure has been killing it with the Hasbro exclusives lately. Star Wars, Marvel Legends, and even Transformers have all been represented. And as strange a partnership as it is, I’m happy for it because either one of the two Walgreens nearest to me seem to always have me covered. And so the moment Wreck-Gar turned up in my Twitter feed, I made a quick trip to Walgreens around the corner and happily found him on the shelf! And all this when I thought I was completely done with buying Power of the Primes Deluxes!

Wreck-Gar comes in the standard Power of the Primes packaging with some pretty cool character art up at the top of the card. And unlike some of Hasbro’s other Walgreens releases, there’s no sticker or anything to indicate he’s a retailer exclusive. The bubble gives a great look at the figure in robot mode (albeit slightly mis-transformed to fit in the package) and there’s an illustrated insert showing the toy in his alt mode. Let’s start there…

If it wasn’t apparent from the packaged shot, Wreck-Gar is very nearly a straight repaint of the Deluxe Protectobot, Groove from Combiner Wars. Indeed, when he’s in his motorcycle mode, the coloring is the only difference. I liked this motorcycle well enough when it was Groove, and I still like it now. Yes, it’s a bit boxy, but motorcycle Transformers have always been tricky designs, especially when you’re going for a more boxy G1-style robot aesthetic. Plus this guy is a combiner limb too, so that has to be factored into the design problems. Taking all that into account, I think they did a pretty nice job. And hey, he’s still not nearly as chunky as the original toy! The new deco certainly sells it as Wreck-Gar. You get a lot of orange along with some red, black, gray, brown, and silver. There aren’t any complex paint applications here, but the range of colors is pretty high for a modern Deluxe. The clear windscreen has an Autobot symbol printed on it, and the headlamps covers are clear plastic.

Features include a turning front wheel, which is not tied to the handlebars, and a flip-down kickstand. It’s worth noting that the wheel swivel on my figure is crazy tight and when you couple that with the fact that the wheel struts are soft plastic, I had to be pretty careful when turning it so as not to stress the plastic, and I doubt I’ll be doing it again. It’s not a big deal in motorcycle mode but, as we’ll soon see, that swivel can be used for tweaking the transformation, if you so choose. And speaking of which, let’s go ahead and check out his robot mode.

As expected, the robot mode is simply a repaint of Groove with a new head slapped on him, and all things considered I think it works pretty well. Sure, he’s missing his rather distinctive nipple guns, and he doesn’t have a tire on his shoulder. Plus, it would have been cool if his combiner connector was painted silver to simulate the engine, but I still like how this guy turned out.

From the back, we can see that he wears the front of the motorcycle as a backpack, and while it does stick out pretty far, I don’t think it’s all that bad. And here’s where that front wheel swivel comes in. On Groove, I like to turn the wheel sideways as it makes the backpack a little less cumbersome, but given how tight the swivel is on this figure, I think I’m going to leave it be.

And that leads me to my other real gripe with this figure. The head is so damn tiny! Obviously they sized it so it could flip back into the compartment on his back, although I would argue that it wasn’t necessary. Well, maybe to make him into a combiner limb, but that’s not something I plan to do with him, so I would have rather just had a larger head. And that’s a shame because the sculpt itself is fantastic. They recreated the front of the motorcycle and handlebars that the G1 figure had as a “helmet” really well and his tiny beard and mustache are there too. I just with his noggin were bigger. 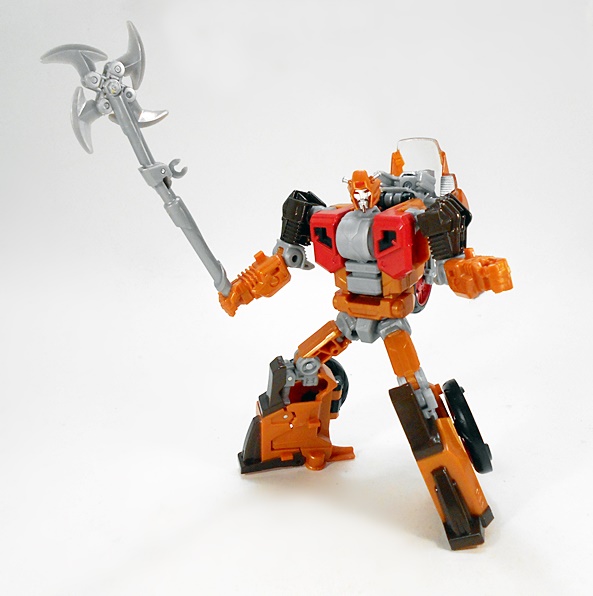 The figure comes with two accessories: A Black Prime Armor piece, which is getting tossed into the Tote of Forgotten Accessories™ and a bladed axe kind of weapon. The weapon looked familiar and sure enough it’s the same one that came with the Wreck-Gar figure from the 2011 Reveal the Shield release. 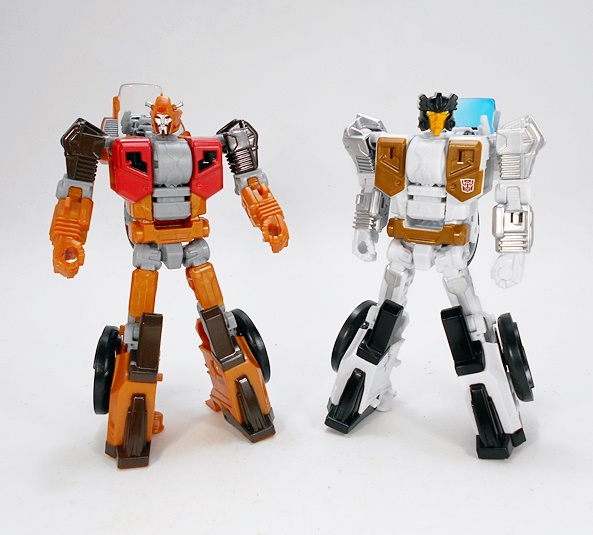 For what is essentially a quick-and-dirty repaint, I find myself enjoying this figure a lot. Yes, even with his small head! The 2011 Wreck-Gar was a decent figure, and his asymmetrical design really sold him as a Junkion, but mine broke during transformation, which was pretty disappointing because I don’t transform these toys a lot. Either way, I think this one’s boxier physique sells it more as a G1 homage, and for that I’m willing to give it the nod as my favorite of the two. If I still had the 2011 version, I’d try to do a head swap. Maybe I still have him kicking around somewhere! On a side note, I have one more Power of the Primes Deluxe to open up and review and then I’ll start hitting some of the bigger bots I missed out on. Hopefully, that’ll give me enough Transformers to talk about until the new line starts showing up!

One comment on “Transformers “Power of the Primes:” Wreck-Gar by Hasbro”