Blah. It’s my first Monday back at work after a long vacation and that’s bumming me out. Luckily, I can cheer myself up by opening one of the two dozen or so Marvel Legends figures that are piled in a box in my Toy Closet. And this week I’m not playing favorites, just reaching into the box with my eyes closed and pulling out… Elektra! And while I’m stoked to be getting a new comic version of Elektra for my Marvel shelf, I was hoping to draw another figure from the Cull Obsidian Wave, because I’m getting close to completing it. Ah well, maybe next week! 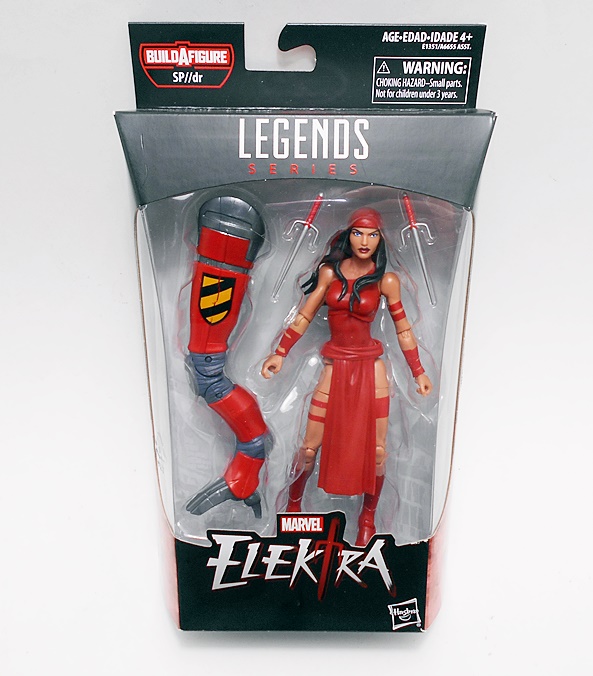 Fun fact! I was once on a flight where they were showing the 2005 Elektra movie and after twenty minutes I chose to take off my earphones and stare at the seat in front of me rather than watch it. Maybe Hasbro will release the Jennifer Garner version of her in 2025 for the 20th Anniversary! In the meantime, here’s a very badly needed update of the comic version by Hasbro (I never did find me that 2008 two-pack) and no, she doesn’t come with as many goodies as the old Toybiz version. 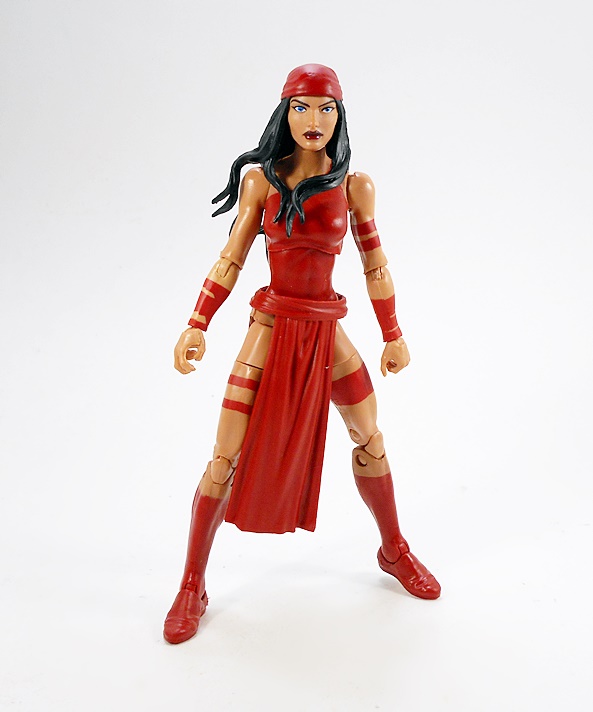 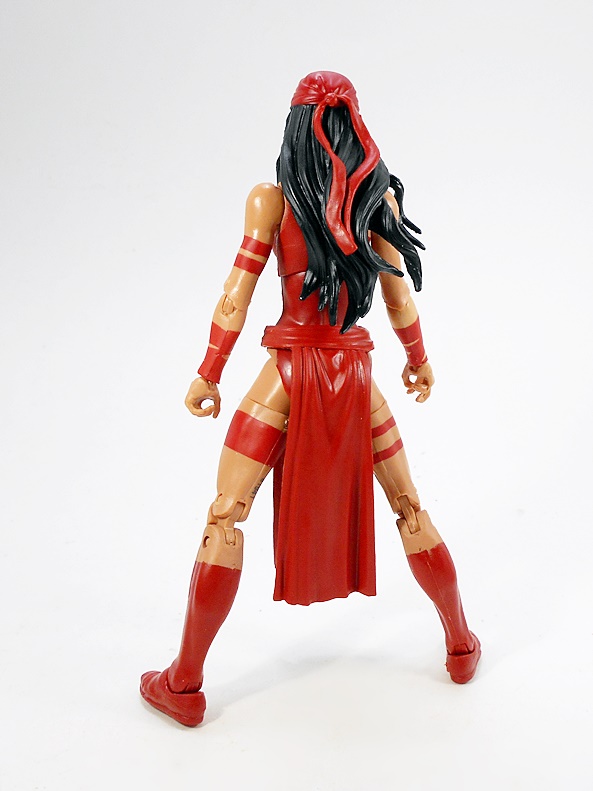 The figure, on the other hand, is a nice improvement, and that’s not meant as a knock on Toybiz, because I think their Elektra is one of the few that still hold up fairly well today, even if it isn’t all that favorably looked back on by most. Indeed, the reason I’m bringing that figure up so much is that it was one of a handful that I was truly sorry to see go when I sold off my collection. But not anymore. This Elektra looks great and manages to do a lot with very little new sculpting. Indeed, the costume here is achieved almost entirely by paint, using only the belt and sash for sculpted detail. Honestly, it works, but I would have loved to at least see some sculpted wraps on her wrists and legs. At least the paint is pretty clean and the red is vibrant! 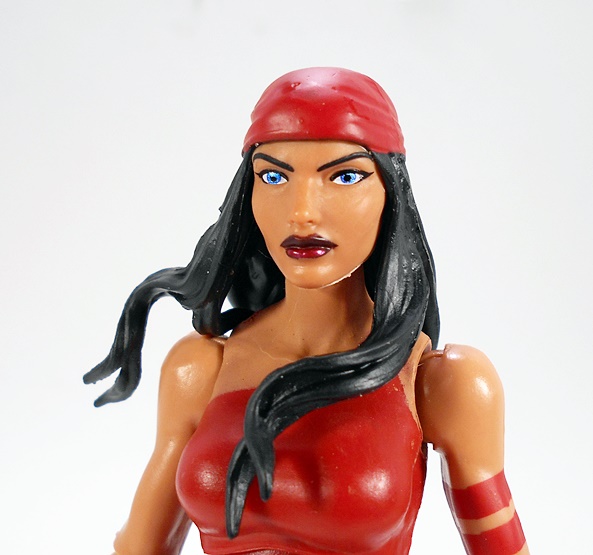 And it’s nice to see that all that extra sculpt went into what is a fantastic portrait. The paint on the eyes and lips is nice and clean, and I love the way they sculpted her hair and the scarf tied over the top of her head. There’s a little bit of mold flashing on the jawline and I wish Hasbro would get that shit under control, but I can probably clean it up a bit with a razor. 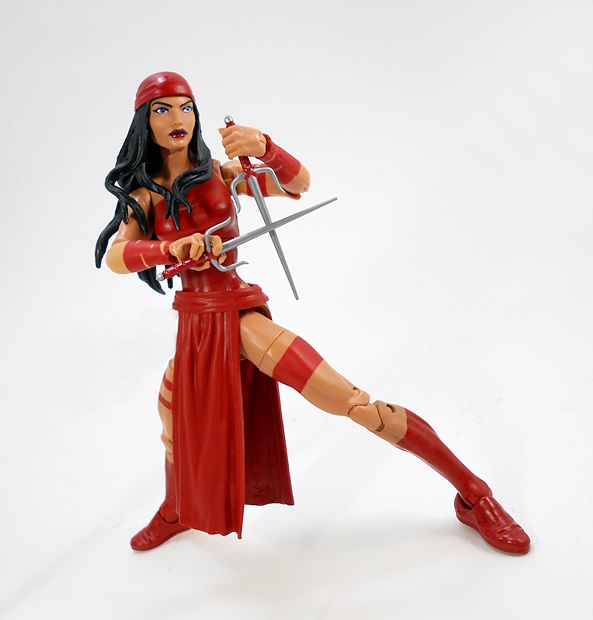 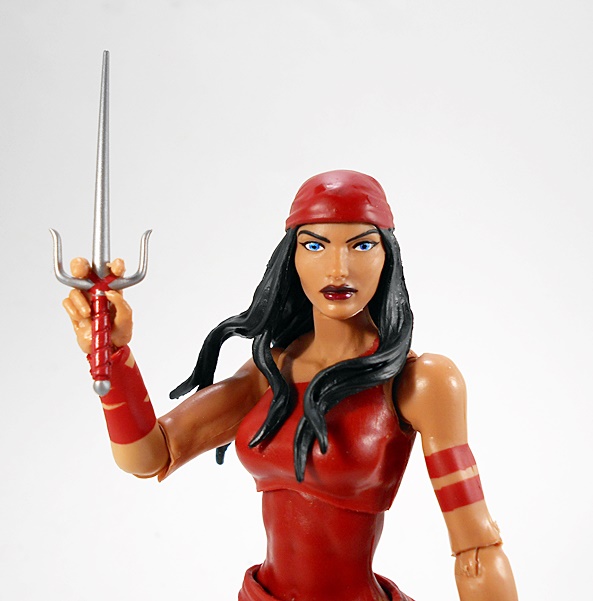 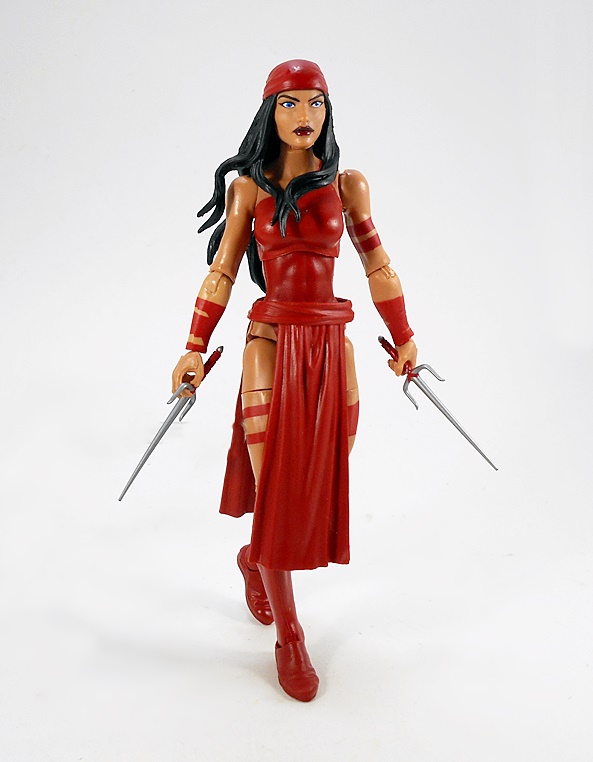 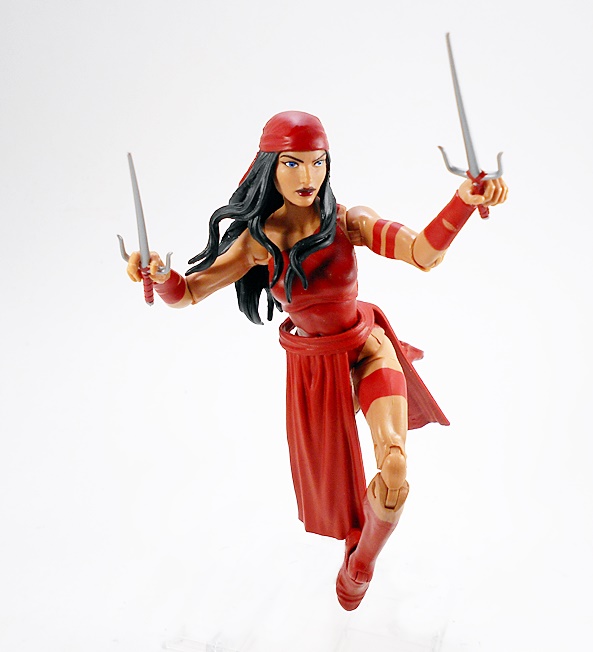 Elektra comes with two accessories: Her set of sai weapons. Like I said earlier, it’s a lot less than we got with that old Toybiz version, but at least the essentials are here. Maybe I’ll dig out one of my Articulated Icons figures and lend her some of those weapons. These appear to be repacks of the ones that came with Netflix Elektra, but with a more metallic finish and painted red wraps on the grips, which also crisscross the guards. All in all, I think these look a hell of a lot nicer than their last appearance. Also like the Netflix Elektra, this version’s right hand is sculpted to hold the Sai outward, with two of her fingers wrapped around the guard. It would have been cool if Hasbro included a second left hand like this, but I guess it wasn’t in the budget. 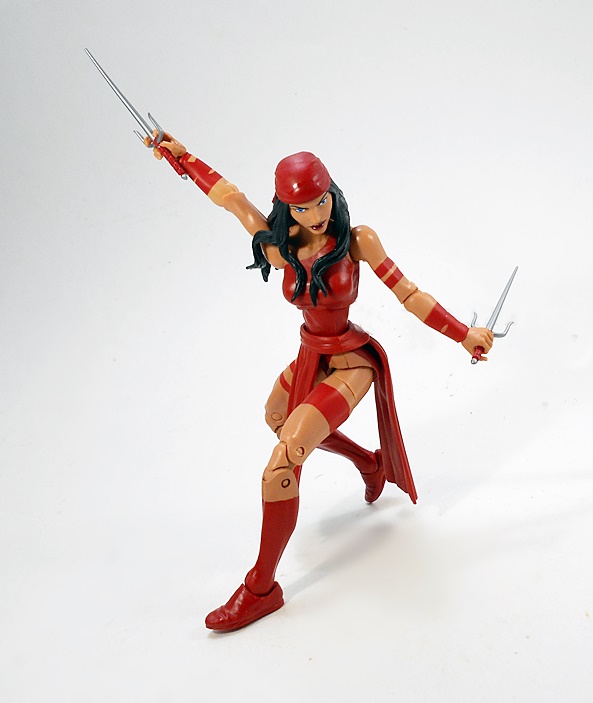 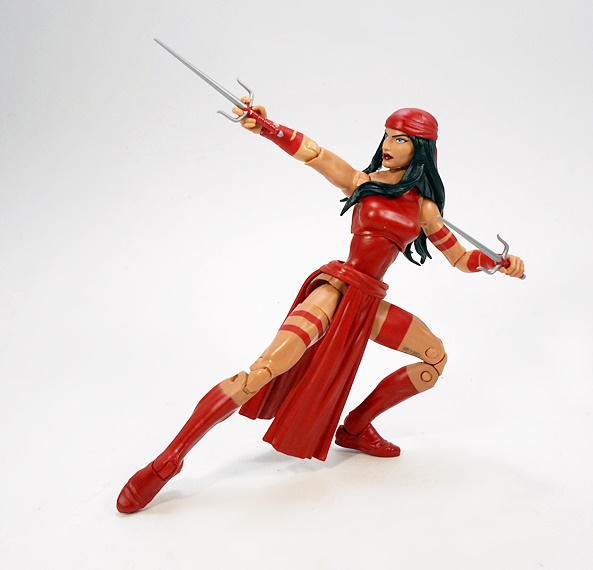 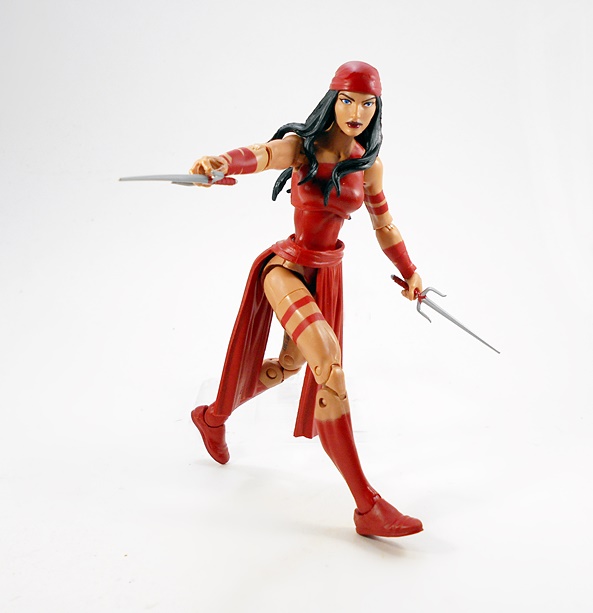 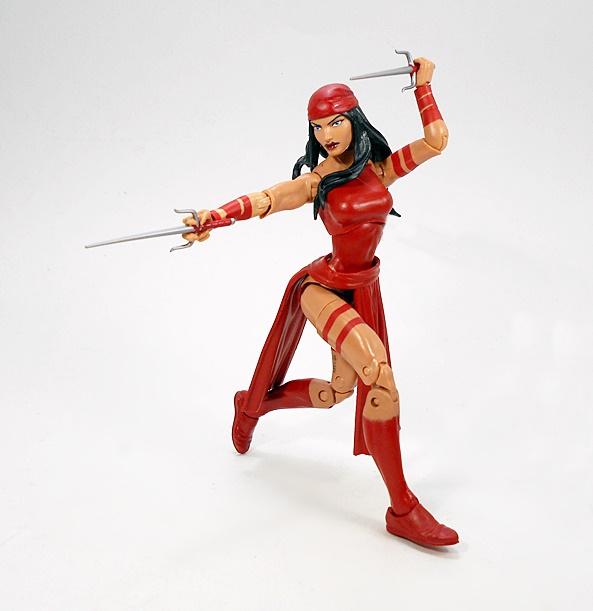 Articulation here is solid, and there’s nothing bad or unexpected here, but Elektra is one of those figures that shows some of the limitations of Hasbro’s female Legends. My big issue continues to be the elbows’ rotating hinges. It’s long past time Hasbro give the ladies those double-hinges. The ball joints in the hips are also a bit limiting for a character as agile and acrobatic as Elektra. Finally, the belt and sash can get in the way sometimes, and it tends to ride up above her hips on certain poses. Finally, her ankle hinges appear feel like they’re ratcheted, which is weird. I thought they had no room to go back and point her toes, but it just required a bit of extra force. Still, all in all, she’s loads of fun. 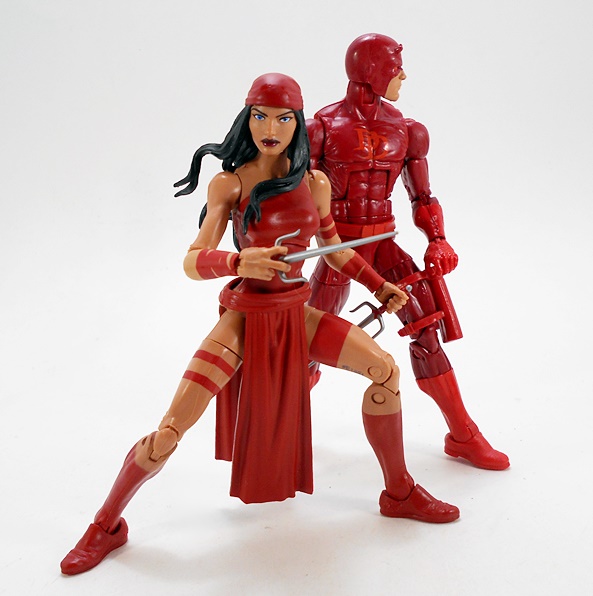 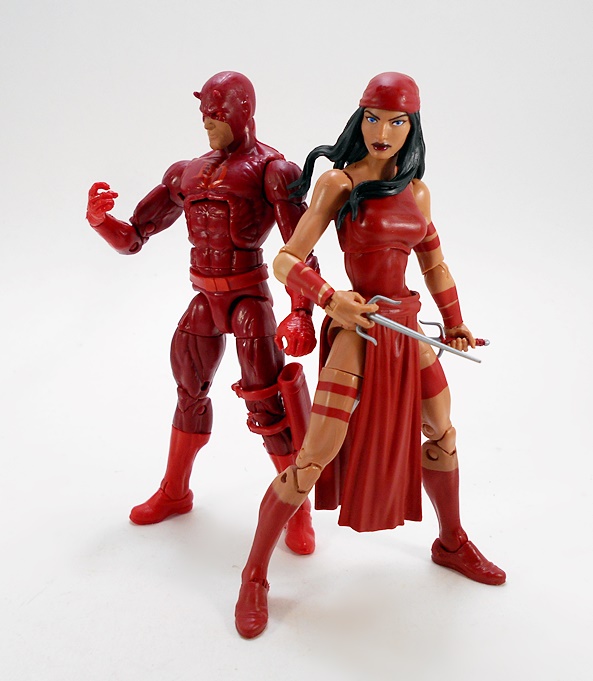 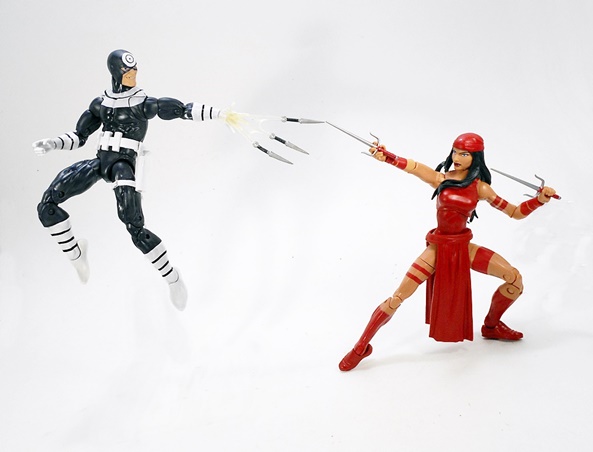 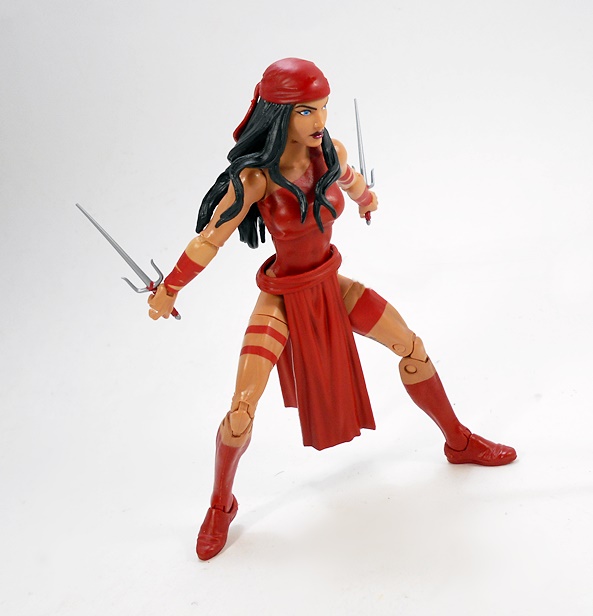 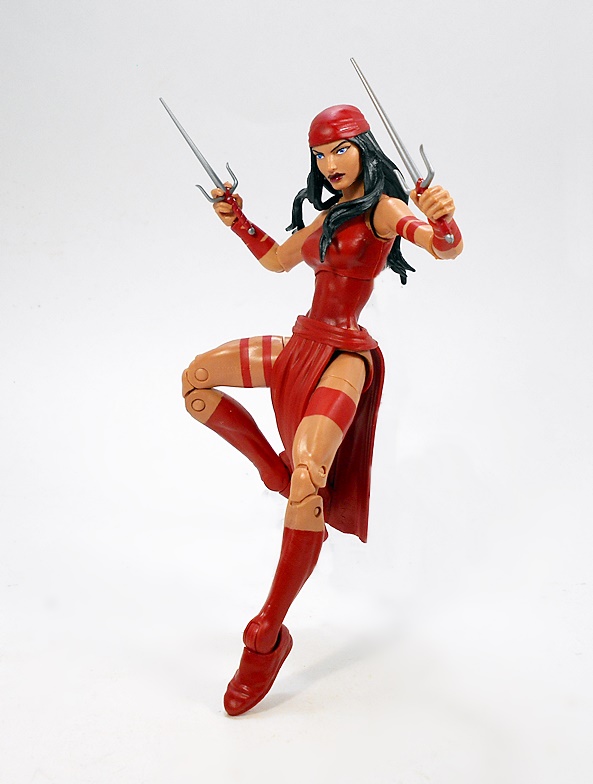 It surprised me that it took so long after Elektra’s Netflex debut to get us a comic version, but hey better late than never. I think she turned out great, although a little more fresh sculpting would have been welcome. Especially since, as we’ll eventually see, this wave has quite a few of what I would call budget figures. With a repaint of Daredevil, and two more Spider-Man variants, it feels like Hasbro could have plunked down a little more money on the sculpt or a few more accessories. But hey, I bought her, and I’m quite happy with her, so I guess they know what they’re doing.