I started this week with Carol, so I might as well end it with her too! We got two versions of Captain Marvel in this wave, one in her official MCU suit and this variant, also in her official suit, but with her bomber jacket on over it. Some may have hoped for another character in the wave instead, but I was sold on this figure the moment I saw it.

After a week of this wave, I’ve got nothing new to say about the packaging. You will, however, note that that this is the version of Carol you have to buy if you want to build the Kree Sentry. Back in the day, Hasbro would have just included the same part with both figures, but they’ve gotten wise to that. I do appreciate that they actually cooked up different character art for the back of the package to reflect this look. And the way they posed her on the tray holding Goose gets my vote for best packaged Legends figure ever. Seriously, I may need a second to keep sealed.

Obviously, this figure features a lot of parts-sharing with the other Captain Marvel. The torso and legs are all the same, and the jacket is the usual illusion comprised of a soft plastic vest with the sleeves sculpted onto the arms. And so from the neck down, the arms and hands are the only new pieces of sculpting here. At first, I thought they just recycled the flat hands from the other figure, but these feature a little more curving to the fingers and the thumbs are out, making them perfect for holding her furry friend. And yup, you can use the two sets of hands that came with the other Carol if you want to. The jacket is pretty simple, but it looks great. There are sculpted elastic rings around the sleeves and waist, sculpted lapels, and there’s a printed image on the back

The biggest addition to the figure is the new head sculpt, which features Carol with slightly windblown hair and smiling. I’m really glad to see the expression on this one, since there’s been some criticism in the trailer of Carol not emoting much and just looking darkgrim or expressionless. Personally, I’m not worried about it. Marvel has never had a big problem with balancing their movies with levity and keeping them lighthearted. Of course, the heads are interchangeable between the figures, a great bonus for owning them both. The printing on the facial features doesn’t do it any favors in close ups, but it looks great in hand and with the naked eye. 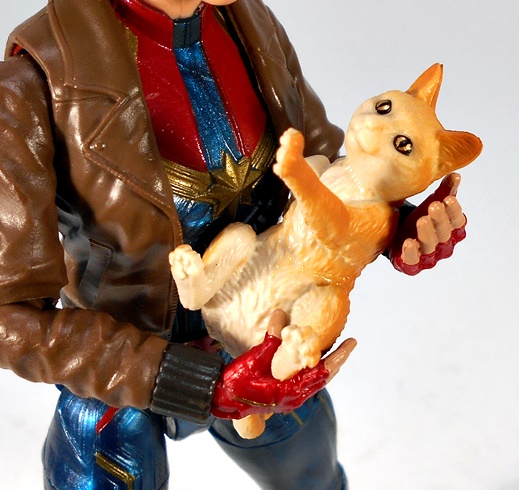 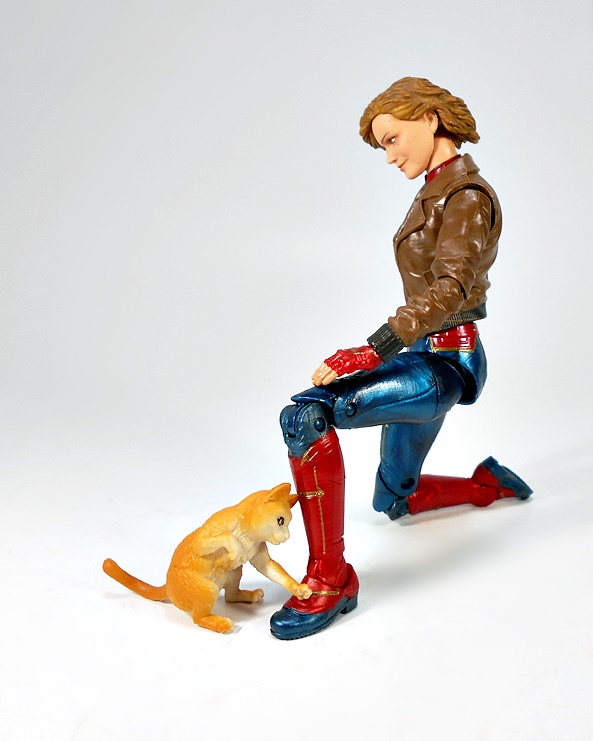 Articulation here is identical to the other Captain Marvel, so let’s skip it and head straight to her accessory. It’s another version of Goose, and this time he’s not in creepy restraints, and instead just looking adorable. He’s a static sculpt, but the pose is versatile enough so that it not only works for being held by Carol, as he is in the package, but also standing on his own with one paw outstretched and the other drawn back as if he’s playing. 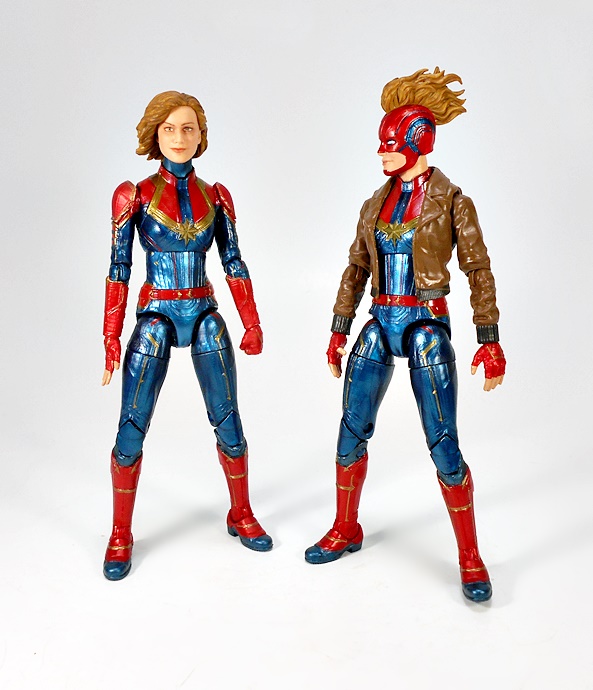 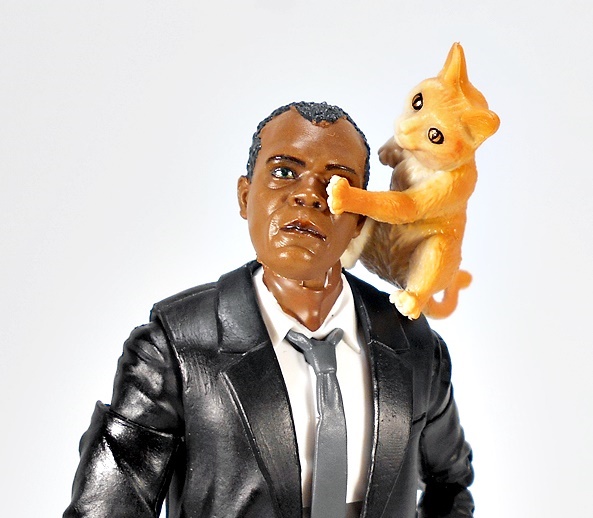 I’m a little surprised, but this figure quite possibly turned out to be my favorite in what was a pretty strong assortment of figures. I just really dig the costume with the jacket over it, and it’s definitely my favorite portrait of the three. It would have been just as easy for Hasbro to go with a repaint of Captain Marvel in the Kree Uniform colors, and while I’ll still happily pick that one up if they do it, it’s nice to see that they didn’t settle for the low-hanging fruit. And that wraps it up for the individual figures, come on back later tonight and we’ll check out the Kree Sentry!