It’s been a few weeks since I opened some NECA goodies, so let’s remedy that on this fine Friday by plunging into their Predator pool and pulling out something new! I’ve still got two of the three figures from Series 18 to look at, but I think I’m going to set those aside and instead open up another of their Ultimate Series, and one that’s been sitting around for way too long. Let’s check out Ultimate Ahab! 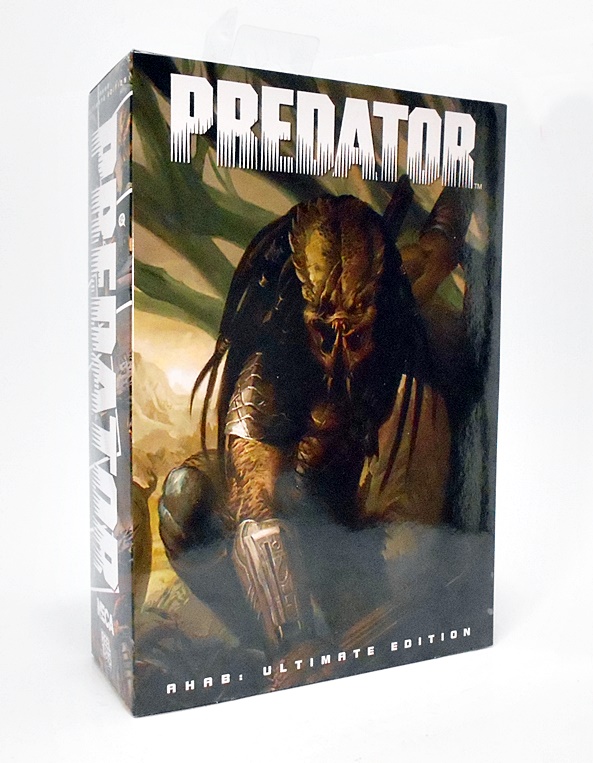 Pulled from the pages of Dark Horse’s Predator comics, Ahab is an Elder Predator with a bit of an obsession over hunting Engineers (as in Space Jockies not people who drive trains or design bridges!) and oh my, what a great choice he is for the Ultimate Series treatment. As always, the packaging here consists of a window box with a front flap covering the window. It’s got plenty of pictures of the figure as well as some kick-ass artwork, and everything is collector friendly. The fact that these are some of the few action figure packages that I actually keep should speak volumes about how much I dig them, but saving the boxes also comes in handy to keep all those extra goodies! They don’t call these Ultimate for nothing! 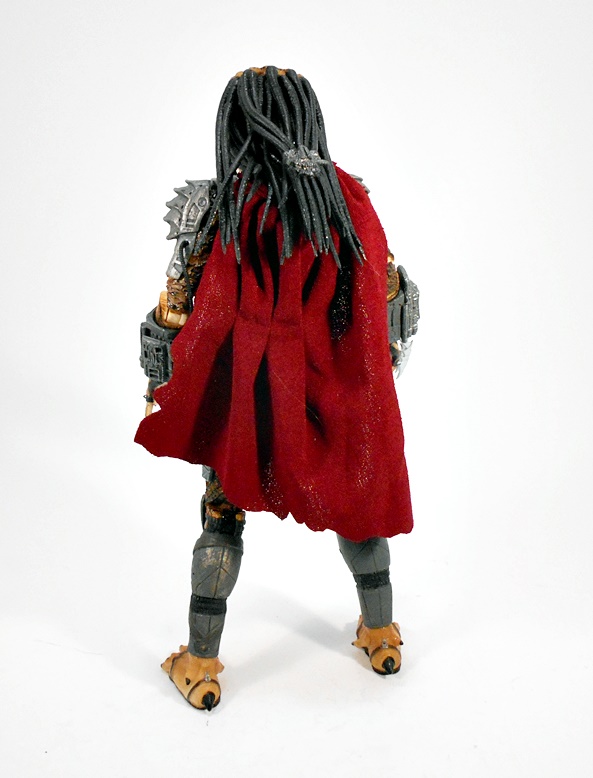 After the uniquely crazy look of Broken Tusk, Ahab is kind of a return to basics, or at least a much simpler and streamlined outfit. He’s got the usual net-motif sculpted into his torso and legs, as well as armor on his lower legs, forearms, shoulders, and the upper left part of his chest. The outfit is rounded out with a simple belt, thigh armor, partially covered by sculpted fur, and an alien skull hanging around his neck. He also features a stylish crimson cape, which is made of an exceptionally nice material and hangs down just a bit below his waistline. Obviously, the comics and other associated Predator fiction has given us a wide array of different looking Predator outfits, and while I dig the more distinctive ones, it’s also refreshing to get back to basics. 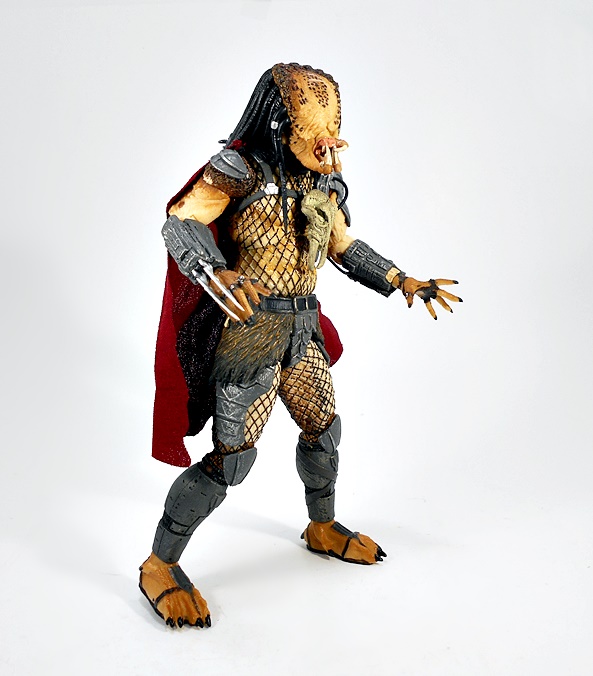 The paintwork is excellent and the figure exhibits all the usual flourishes I’m used to seeing on these guys. Ahab’s Yautja flesh varies from a sickly pale yellow to orange, and he’s got several natural markings on his skin, particularly at the inner thighs and shoulders. The armor isn’t as heavily weathered on this guy as some of my other Preds, but it has just the right amount to make it look lived in and well used. There’s also a bit of gradient brown on the sculpted fur patches. 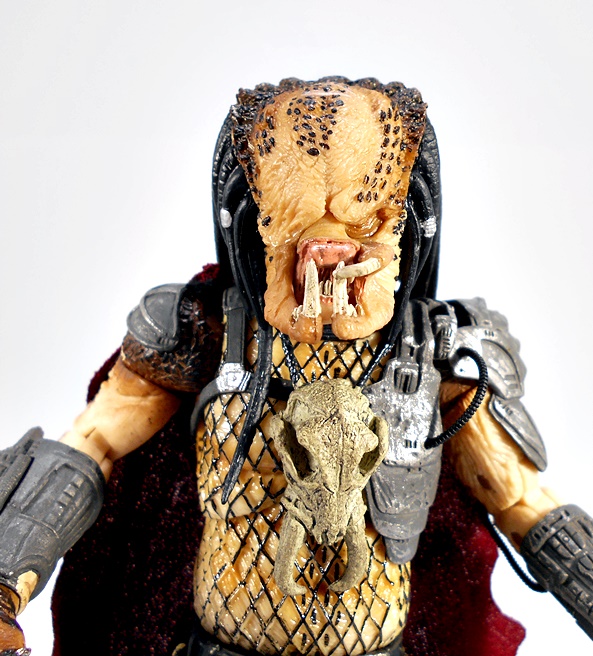 The exploits of Ahab’s hunts are written all over his face. His right eye is missing and flesh has grown over the socket. He’s also missing his right upper mandible, and there are some scars interrupting the spotting on the top of his head. But he’s still a handsome devil and I will never stop being impressed by the work NECA puts into the Predator dreadlocks, with each one separately sculpted. And while it’s not actually part of his head, now seems as good a time as any to talk about the hose that connects the shoulder armor to the piece of chest armor. With my past Preds, articulating the arm would cause this to pop out of the hole on the chest armor. That’s fine, because otherwise it would severely limit that limb’s articulation. Unfortunately, this one appears to be glued in, because instead of simply popping out, the tab broke off in the hole. I may glue it, I may leave it out, or I may just snip it off entirely. 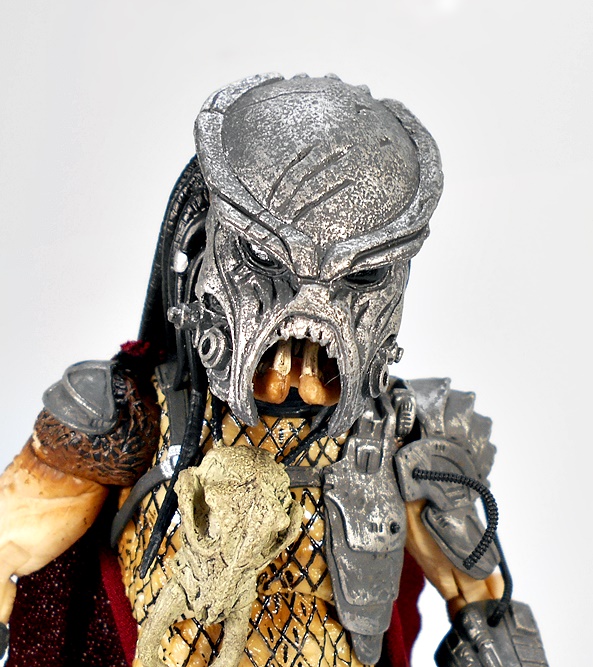 Instead of a swappable head, Ahab actually comes with a wearable mask. This is held on mostly by friction, but it fits pretty well and leaves his mandibles exposed. The interior also features some great detail, and I love that NECA bothered to paint the interior of the eyes red.

Ahab’s arm bracers conceal the usual Predator gadgets. The left arm has his flip up computer and his right arm houses his twin extending blades. You can also swap this piece out for one with triple blades, which is a damn cool bonus. And if you don’t want either sets of cutlery getting in the way, you can remove them and attach the bracer piece to have them retracted all the way in. 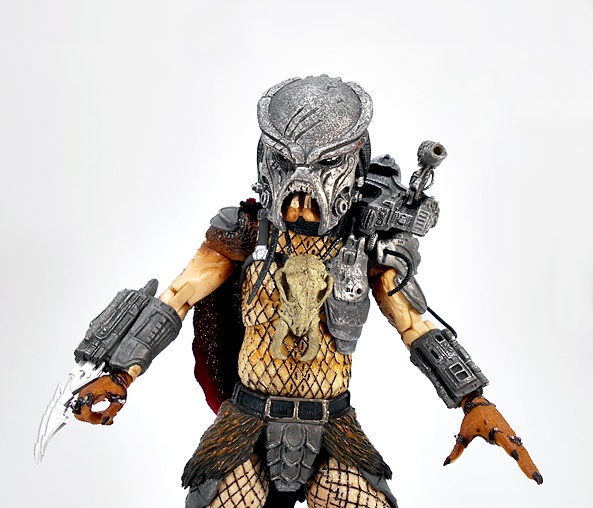 Ahab also comes with a satisfying number of weapons, the first of which is his shoulder-mounted plasma-caster. If you’re familiar with NECA’s Predator figures, than you’re familiar with this piece. It clips onto the shoulder and features the same level of detail in the sculpt and paint finish as the rest of Ahab’s armor, blending in perfectly. The caster itself is positioned on an articulated arm allowing it to target his pray. I love the look of these as display pieces, but they tend to get in the way of the head articulation, so I tend to use them for regular display, but not when I’m playing around with the figure. 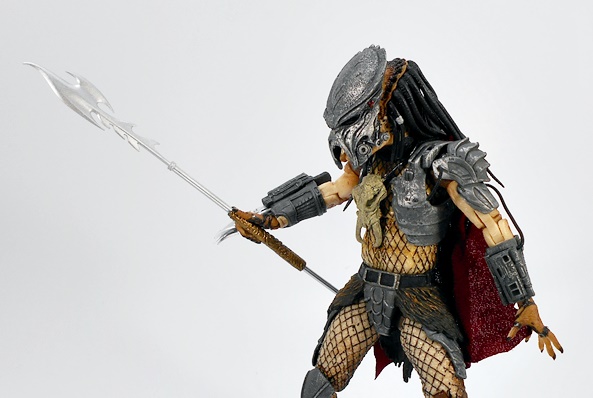 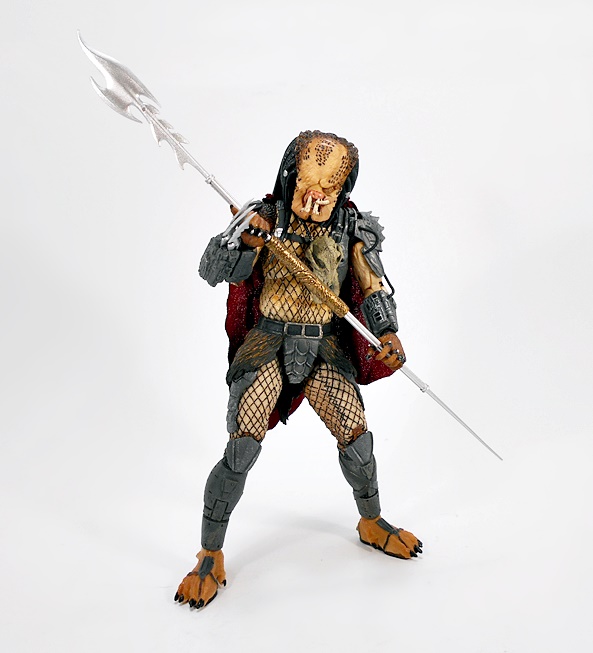 Next up is his spear. It’s got a beautifully sculpted blade with serrated hooks trailing down the top of the shaft. The middle is sculpted with a thick grip and the far end terminates into a sharp point. Ahab comes with a pair of accessory holding hands, which allows him to wield this in one or both hands. Although it should be noted that it’s a delicate piece, and some care should be taken when getting it into his fingers. NECA also included a small clip that can be attached to his back to hold the spear, but I doubt I’ll use it since the cape gets in the way. 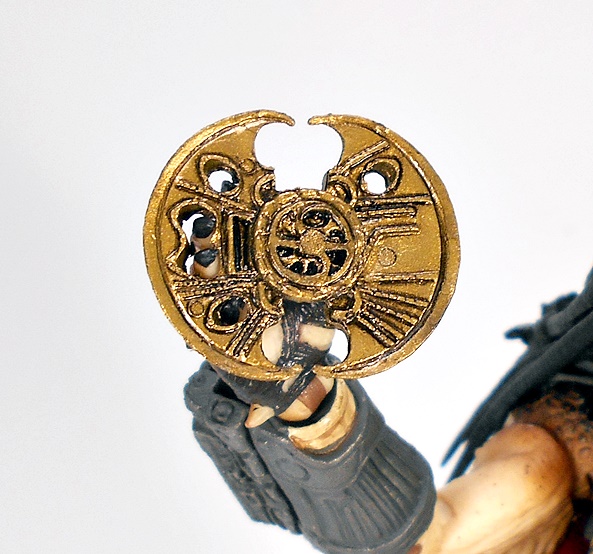 The Smart Disc is an accessory we’ve seen before and it’s always a welcome addition. It’s painted gold and features some great sculpted detail, along with finger holes to work with one of the right hands. The only downside here is that he doesn’t have a place to store it when he’s not using it.

And I saved my favorite weapon for last, and that’s the Engineer rifle. The design of this weapon is just so damn cool and it brilliantly reflects the HR Giger techno-organic motif seen in the Engineer’s spaceship. The way it coils around it looks like some kind of worm-like creature is wrapping around Ahab’s arm. I’d love to get another one of these to give to one of my Engineer figures, but I’m sure as hell not going to take this one away from Ahab.

The final accessory is the skull and spinal column of an Engineer. It’s a beautiful, albeit grim, sculpt and features a gray painted finish. 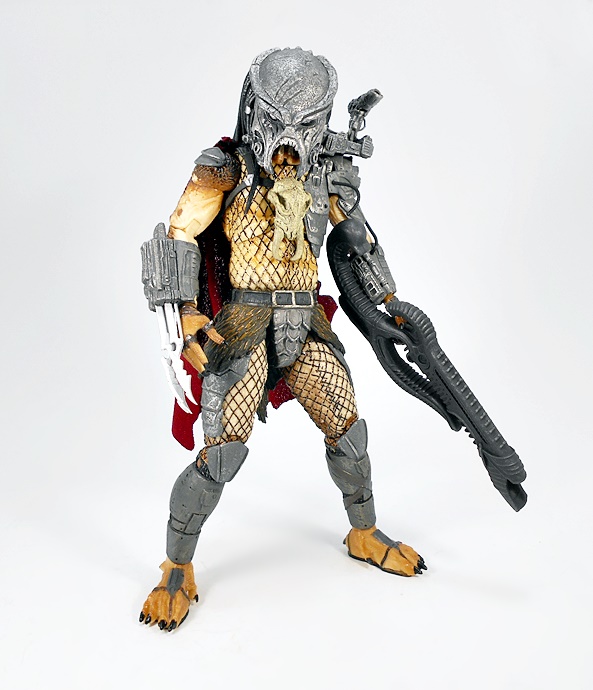 I don’t think I’ll ever grow tired of adding new Predators to my collection, and Ahab here is yet another great example of why. The team at NECA clearly loves these alien hunters so much, and that comes out in all the beautiful details and wonderful craftsmanship and bevy of accessories. It’s hard for me to choose favorites here, but Ahab surely takes a place right beside the Jungle and City Hunters as my top Predators. And best of all, since I never owned the original NECA release of Ahab, I didn’t even have to double-dip to get this Ultimate edition.