In case you missed it, I’m a little bit smitten with Banpresto’s Flag Diamond Ship series of roughly 9-inch scale One Piece ladies. I came for the first releases of Nami and Boa Hancock and stayed for the rest. And since it’s been so very long since I last did an Anime Saturday feature, and because I have so many of these piling up, let’s open up a new figure in this series. Yeah, I know it’s Wednesday, but things are so discombobulated on my end, who cares anymore? Oh, hey… it’s Perhona! The Ghost Princess!

As always, these figures come in fully enclosed boxes with some lovely shots of the figure inside and the CRANEKING logo. The package is fairly bi-lingual in that it bears the line’s mission statement in English on two of the panels. Perhona comes wrapped in plastic and requiring a little simple assembly before she’s ready for display.

And here she is, standing with a wide stance, her left hip thrust to the side, her left hand tucked behind her and her right hand tugging on her top. She’s sporting one of the more interesting outfits in this series, and that’s really saying something! Starting at the bottom, Perhona’s showing off a pair of glossy black high-heeled boots, with the toes pointed slightly inward. The boots end just above her ankles giving way to what I can only describe as some kind of kinky latex stockings laced up the side, with pink stockings peeking out the tops and secured with sculpted garter belts. Wow! The platforms on her heels are gray and she’s got a red ribbon tied around her right ankle.

Oh yeah, Perhona also sports a rather unique looking flintlock rifle, slung over her right shoulder. I really love what they did with this piece. The stock feature a sculpted wood-grain pattern with the barrel and fixtures painted gold. There’s even a beautiful scroll-work motif sculpted into the panels on the sides. 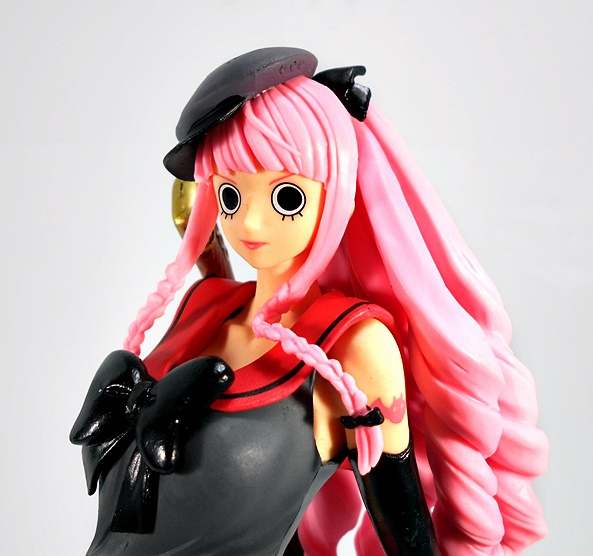 And that brings us to the portrait, and this is where I have to confess that Perhona’s eyes creep the hell out of me. Those giant perfectly round pools of inky black look like they were made to suck the souls right out of people. What’s even more disturbing is the contrast between those eyes and her large coif of bright pink hair. It flows down her back in giant locks and spills down each side of her face in braided pigtails with black bows on the ends. Finally, a black and gray cap is crookedly perched on here head.

It’s worth noting that the coloring and paintwork on this figure are quite good. From the mix of dark glossy black to matte black to the warm skin tones and the cotton candy pink of her hair, there are a lot of contrasts here and it certainly makes for a very unique looking figure. She even has her little pink bat tatt on her left shoulder.

I didn’t set out to collect this line. I originally just wanted Nami and Boa Hancock. Then I decided I would just cherry-pick the ones that I really liked, but so far that’s been all of them. Perhona is a great example of that because her character doesn’t do a lot for me, and I already mentioned that her eyes creep me the hell out. But I still dig this figure a lot and I’m mighty glad I added her to the lineup. And at about $25 a pop, this line still feels like it offers a decent value for the money.

One comment on “One Piece: “Flag Diamond Ship” Perhona (Code: B) by Banpresto”