While scheduling the rest of my weeks’ normal content continues to be hit or miss, I have more or less managed to get back on track for Marvel Mondays. This is the one day of the week that I’m trying to preserve at all costs because my Legends backlog is so damn big. And today I have a little more time to invest than the previous two weeks, so I’ve decided to once again throw randomness to the wind and open up Mystique for a little action figure therapy. 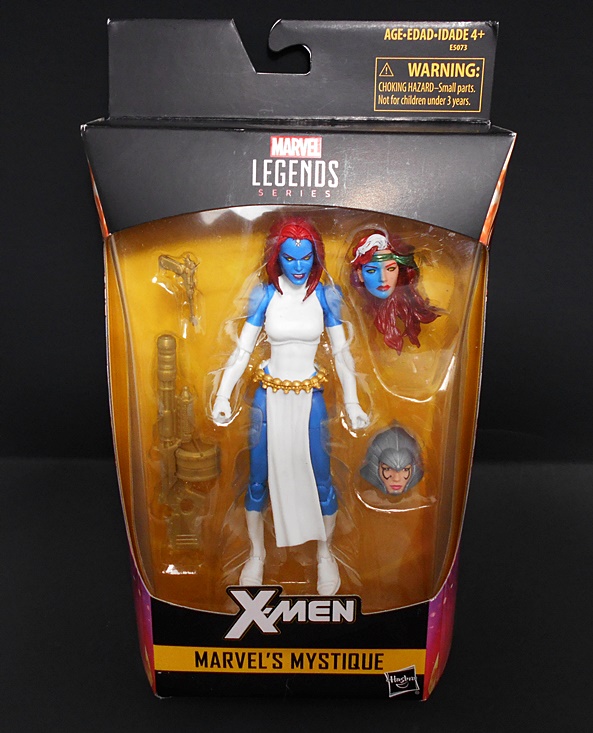 The package doesn’t call it out, but Mystique is a Walgreens Exclusive, so she isn’t part of a regular wave and there’s no Build-A-Figure part. Hasbro does manage to make up for that by bundling some extra cool stuff into the box. Also, this is the new style of packaging, which doesn’t look any different, but features the window as a cover to the tray rather than as part of the box. I haven’t had a lot of trouble finding previous Walgreens Exclusives on the shelves, but Mystique turned out to be an exception. I hit a couple local stores before giving up and grabbing her through a third-party retailer. Luckily it only cost me a few dollars more. I had a hunch she’d be worth it, and I was right. 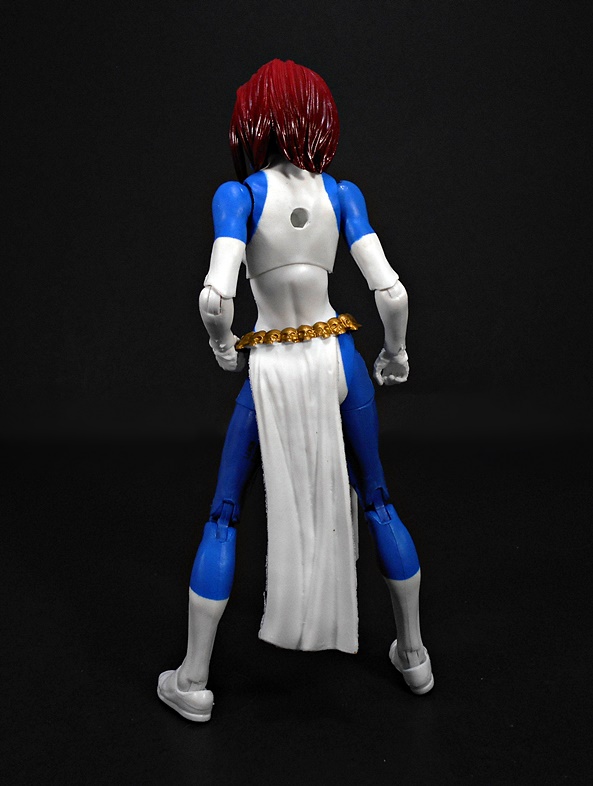 And here she is in what I would certainly consider her most iconic outfit, with her white dress, boots, and gloves, and her skull belt. We last saw Mystique way back in the third wave of modern Legends with her black outfit. I was really fond of that figure at the time, but I don’t think it has aged well, making this one all the more welcome. I do actually have a few minor gripes about this new one, but I’ll get to those in a second. Also, how is it that Hasbro hasn’t started selling figure stands with a connector that will plug into these back holes? With figures like Mystique here, it would make the otherwise useless hole serve a purpose. Anyway… 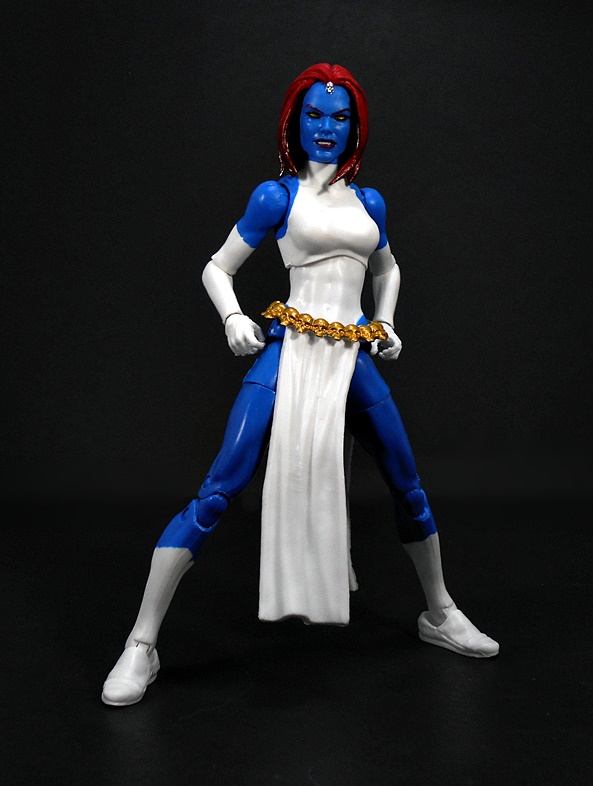 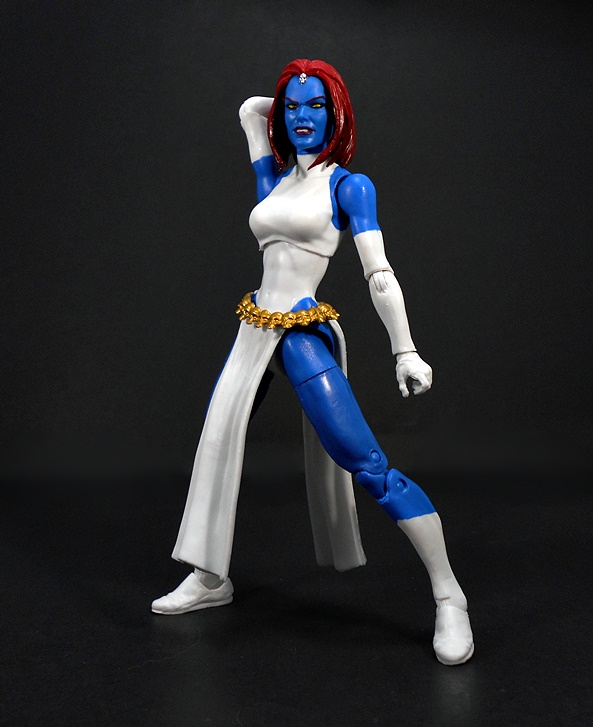 Most of the costume is achieved with paint, including the boots, gloves, and top of the dress. Original sculpting comes into play with the skull belt, and the front and back of her dress, which hangs down between her legs, and is sculpted as part of the belt. It looks good, and while it can ride up a bit with certain poses, I think it’s pretty convincing at creating the illusion of being all part of the same dress. The white parts of the outfit are nice and bright and they contrast beautifully with her deep blue skin. On the downside there are some sloppy lines, particularly around the tops of the boots. There are also some rough edges around the lower back of her dress and some other parts of the figure. It almost looks like something that was 3D printed and not properly sanded down. 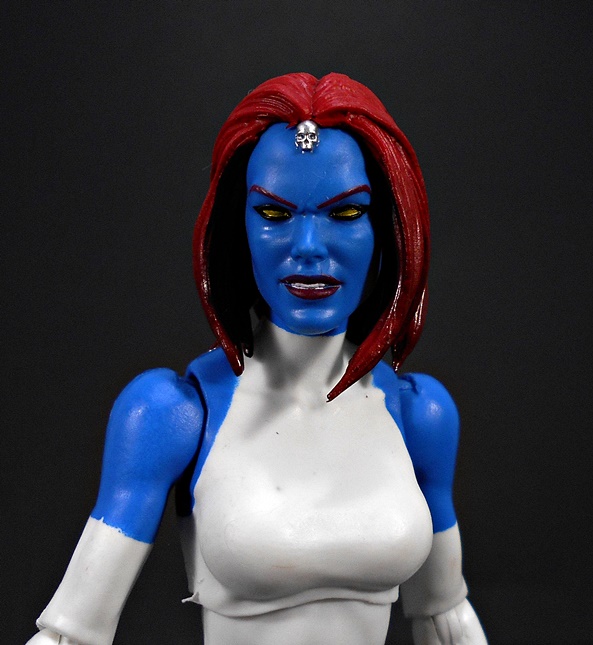 Hasbro rarely disappoints when it comes to their Legends portraits, and Mystique here keeps that trend rolling along nicely. It’s impossible to overstate what an improvement this one is over the Wave 3 head sculpt. Here she sports some wonderfully defined contours to her cheeks and chin, and wears a rather wicked looking smile, which just oozes personality. Her narrow yellow eyes are punctuated by the sharp eyebrows, and her face is framed by the short sculpted hair. The portrait is topped off with a tiny silver skull set in the middle of her hairline. There are two extra heads in the package, but I’ll circle back to those at the end. 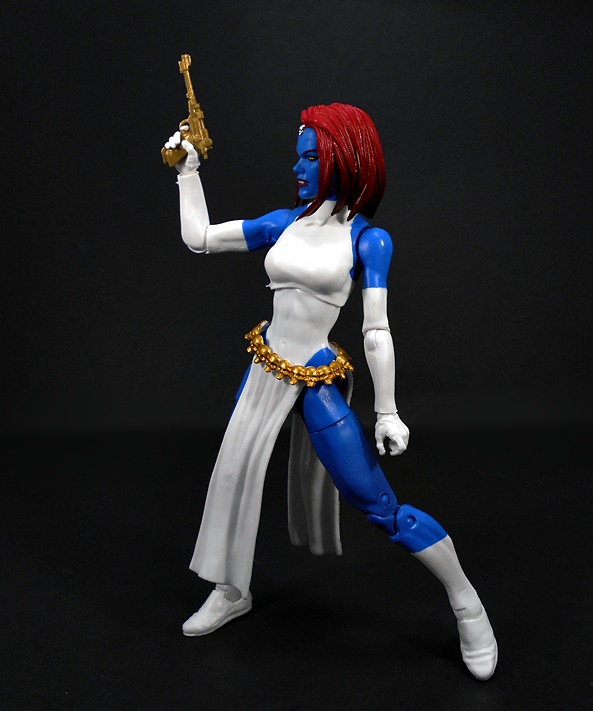 Mystique comes with two guns, which aren’t as impressive as the previous figure’s arsenal. And that’s the only time you’ll hear me praise anything about that figure over this one. The first is a gold Luger-like pistol that we’ve seen bundled with figures over and over (and over!) again. It’s also a slightly smaller version of the same pistol design that came with the Wave 3 Mystique. Truth be told, I don’t really mind this gun and I actually dig the design and sculpted detail quite a bit. But because it’s so distinctive, it’s all the more conspicuous when it keeps turning up with different figures. At least I think it’s pretty well suited for Mystique. Also, both her hands are sculpted with trigger fingers to wield it. 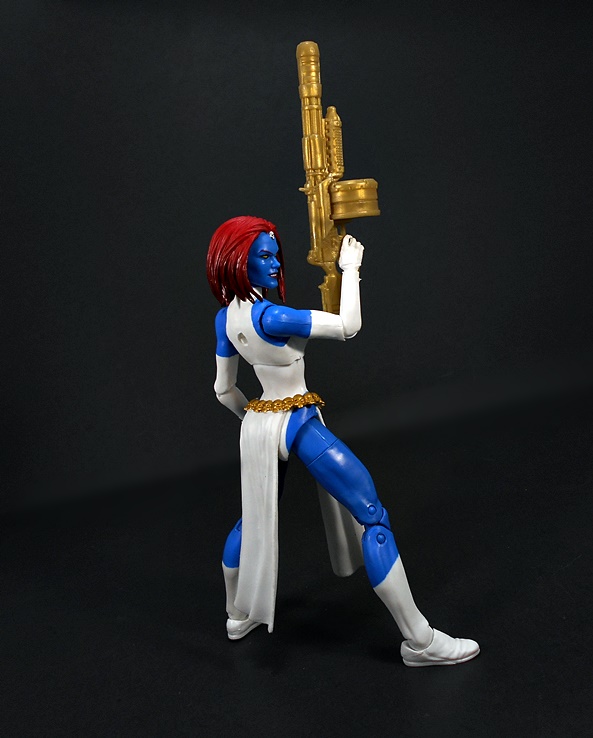 Next up, is this monstrosity! It looks like someone blended together elements of a sniper rifle, pump-action shotgun, and a drum-fed machine gun. In other words, it’s bat-shit crazy, but I also kind of like it. I do, however, wish that it wasn’t sculpted in gold plastic. The gold works OK for the pistol, but it just looks too garish for my tastes on this bigger weapon. On the plus side, the drum magazine is detachable and that’s pretty cool. But I’m still probably going to give Wave 3 Mystique’s weapons to this new version. 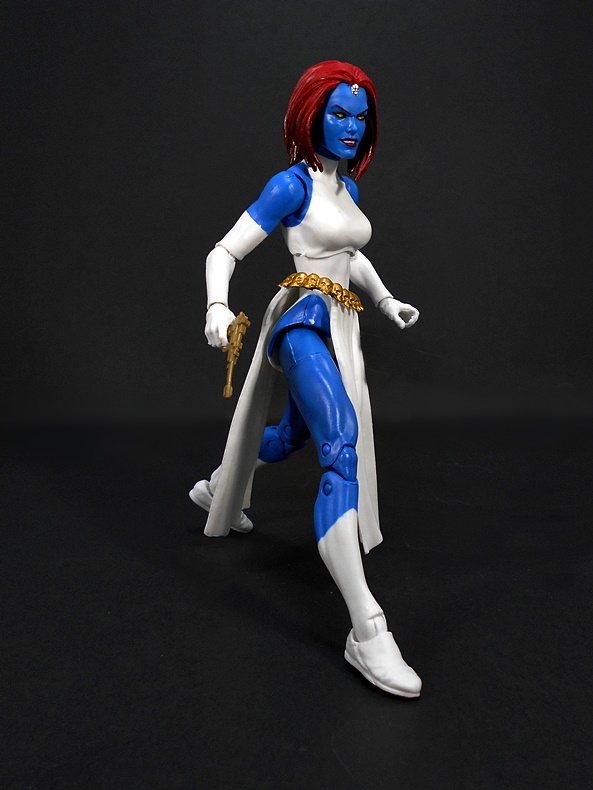 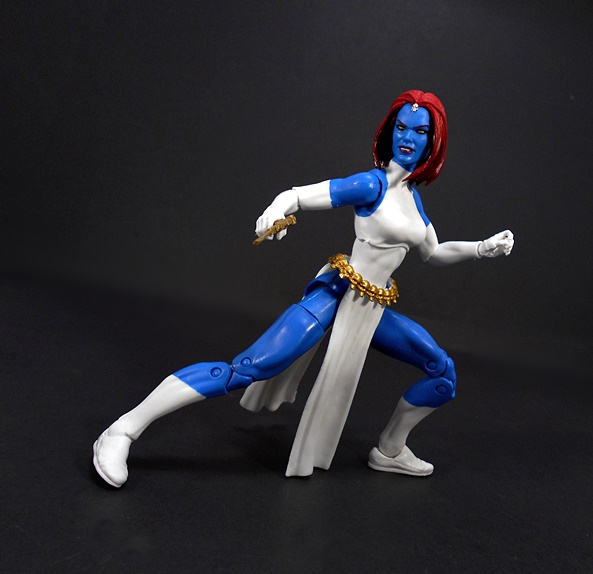 Mystique’s articulation is exactly what I’ve come to expect from my Legends Ladies. The legs feature ball joints in the hips, double hinges in the knees, swivels in the thighs, and both hinges and lateral rockers in the ankles. The arms have rotating hinges in the shoulders, elbows, and wrists. There’s a ball joint under the chest, and the neck is both hinged and ball jointed. As always, I lament Hasbro’s reluctance to put bicep swivels and double hinges in the arms of their femme figures, but even as she is, Mystique is a hell of a lot of fun to play around with.

Swinging back around to those extra heads, the first is Mystique in the middle of transforming into Rogue, and oh boy was this a great choice. It seems to be more or less the same sculpt as the portrait that came with the Rogue figure from the Juggernaut Wave. Besides the partially blue face, the other big paint difference is in the hair.

The other head is that of Majestrix of the Shi’ar Empire, Lilandra Neramani, and this one is a bit more of a poser. I’m going to go ahead and assume that it’s also supposed to be Mystique, but unlike the Rogue head, it’s not depicted in mid transformation, so it looks out of place on Mystique’s body. Collectors seem to be content to re-purpose the recent Silver Sable body for this purpose, and I have to admit it works OK. 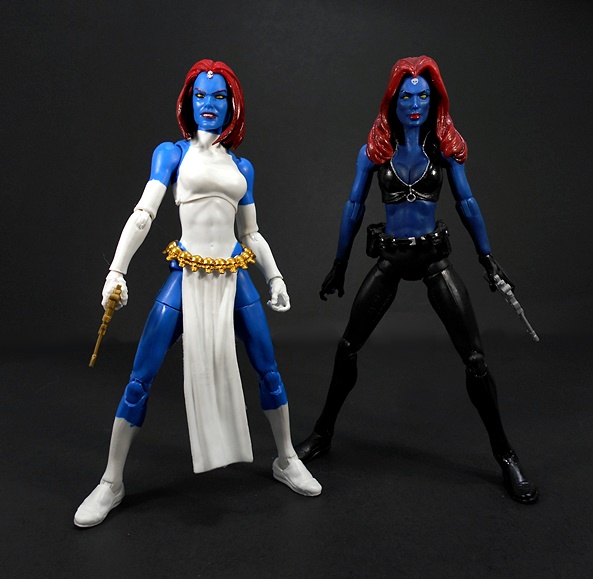 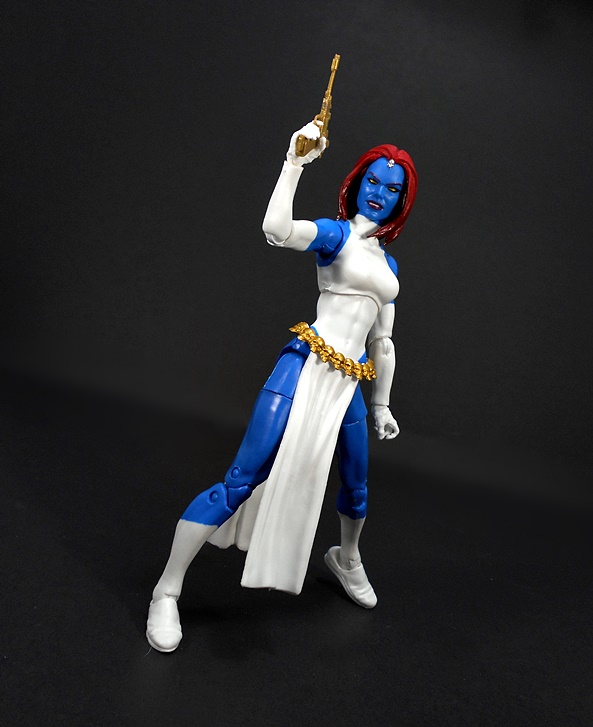 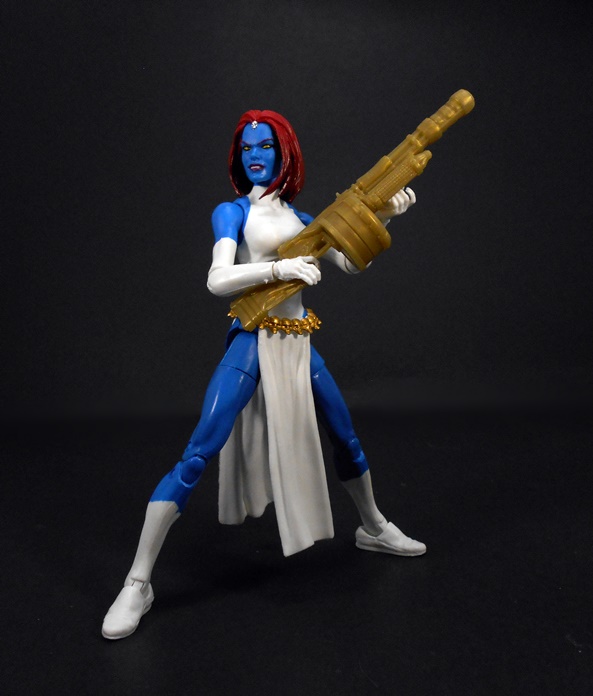 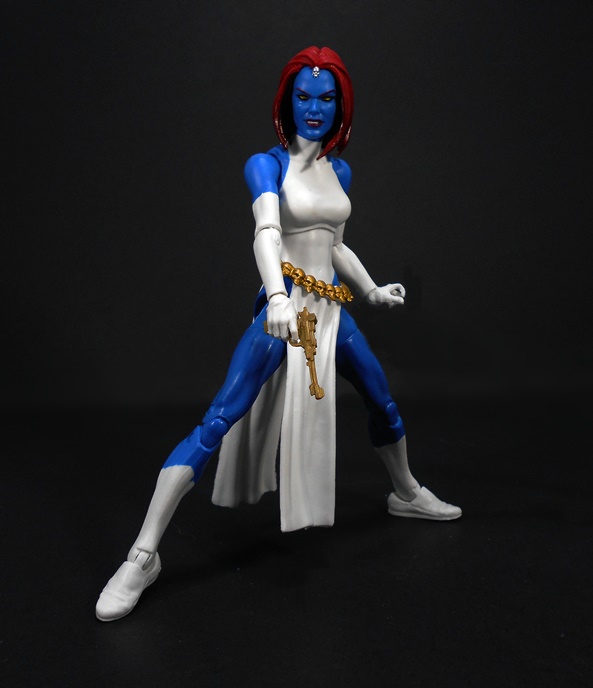 If you twisted my arm and made me say something bad about this figure, I guess I’d cry foul at Hasbro giving such an important release to Walgreens as an exclusive. No, these aren’t usually hard to find, but c’mon, this is Mystique! In my book, Iconic versions of A-Listers shouldn’t be exclusives and it’s hard for me to reason against putting her into one of the regular X-Men waves. With that having been said, she is available at a number of online retailers for just a bit over regular retail, so I guess no harm, no foul. Either way, she’s an excellent figure with just a few minor quality control hiccups keeping her from being perfect.