It’s impossible for me to explain why I was so obsessed with Reflector in the old Transformers cartoon. Maybe it was because his appearances were a bit rare. Maybe it was because he wasn’t readily available as a toy. I’m not even sure I was aware at that age that he was a mail-away figure in the US. It’s also possible that I was fascinated by his very nature of being three robots referred to as one, not to mention the first team of robots that could merge into a single alt form. I often wondered about how that worked, and what a cool alien/sci-fi concept it was. But in the end, it was probably because there were so few Decepticons in the early days, and Reflector bolstered their numbers by three. And sometimes even more than that, thanks to some animation gaffs. 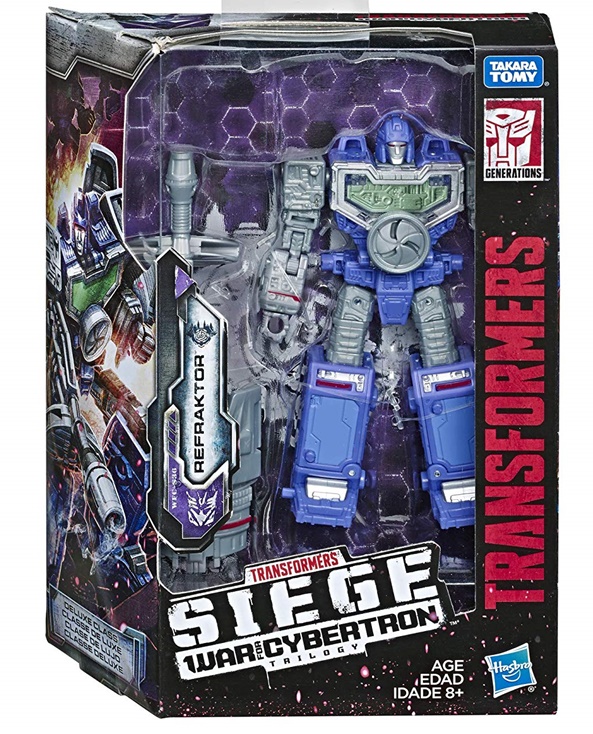 And that brings us to Refraktor! A figure that is just as interesting as his predecessor. Hasbro released him as a single character with its own alt mode, but advertised on the back that you could buy two more if you wanted to make use of their camera mode. Also, I’ll point out now that I’m going to be calling him Reflector during this review, because if I try to call him Refraktor, I’m probably just going to mess it up half the time anyway. Let’s get his bullshit alt mode out of the way first! 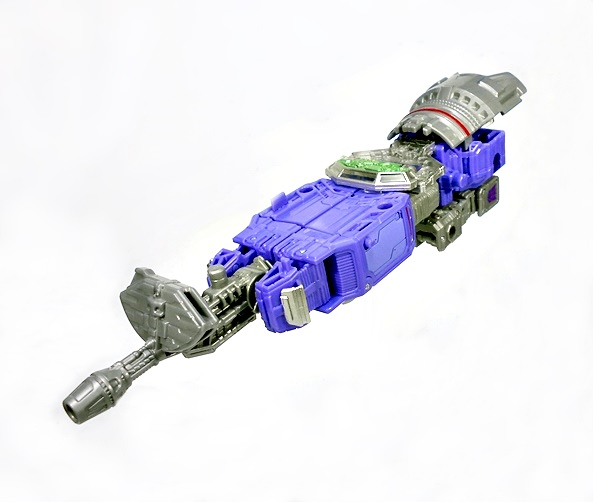 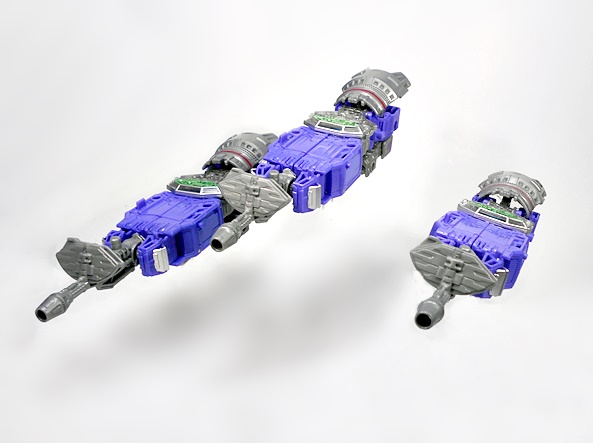 I think this is supposed to be a spaceship, and to be fair it isn’t all that bad. It gives me a little bit of a Sweeps vibe, especially since I have three of them. The Energon Sharkticon also comes to mind, since I used to army build the hell out of those. But to be honest, it strikes me more as a seafaring gunship. Maybe even a hydrofoil, since the landing gear looks like a set of skis. In the end, I don’t hate it, and it’s kind of cool to give these guys something a little more practical to transform into. Especially in a line called Siege. And they do look kind of cool in battle formation. Let’s just move on to the robot mode!

One of the things that struck me most about Reflector in the old G1 days was that he was one of the few Decepticons that didn’t advertise his alt mode with a lot of kibble. It was genuinely tough to figure out what the hell he turned into. It also made him look like a generic rank-and-file Decepticon warrior, which was pretty appealing too. I think Hasbro did a wonderful job with this update. It continues the Siege aesthetic of infusing the sculpt with loads of detail. That’s especially the case here in the arms and behind the clear chest panel. The coloring is pretty damn great too. Purple is always a good choice for Decepticons and it mixes well with the bare grey plastic. You also get some snazzy silver paint hits on the leg panels, feet, and the frame of his chest panel. A little splash of red on the forearms and knees, and a Decepticon emblem on the left shoulder rounds out the deco quite nicely.

From behind, Reflector doesn’t look nearly as polished. There are plenty of hollow compartments and some exposed screw-heads. But at least there isn’t a lot of kibble. Even the skids from his alt mode fold neatly into his leg compartments. There is a way to help spruce up his back view, but I’ll come back to that in a bit.

The head sculpt is extremely faithful to what I remember from the Sunbow animated version. He has the same rounded “helmet,” narrow eyes and broad mouth. The silver paint on the face looks especially good, as does the red used for the eyes, which are pretty much flawless. No question, Hasbro has been killing it with their portraits in this line, and Reflector here is no different.

The one real difference between the three robots in the cartoon was the aperture being present in one and not the other two. Here that’s easily achieved by pulling it off. Yeah, it leaves a peg hole there, but I’m OK with that. I’m sure some Third-Party company will release a bag of plugs to cover these up and charge $20 for them. No, seriously, nobody do that. I will probably be the one dumb enough to buy them. 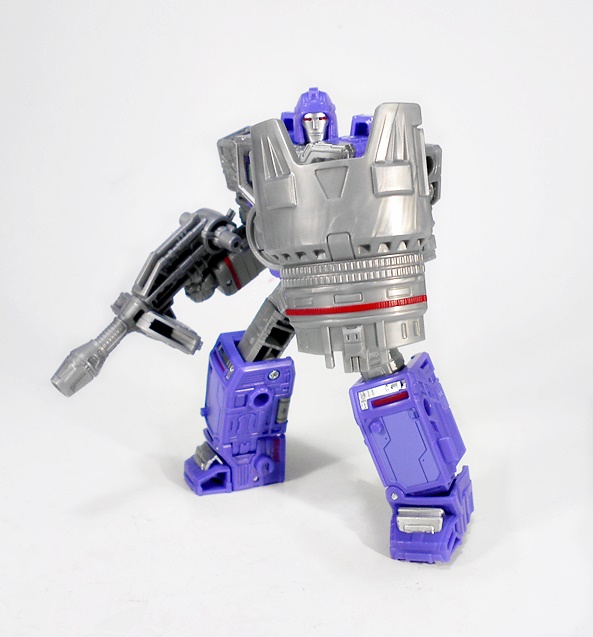 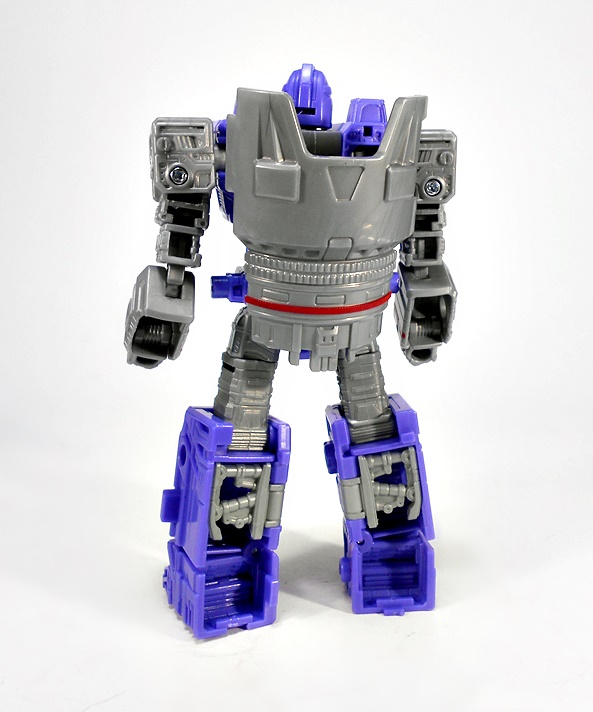 Reflector relies heavily on two rather large pieces for his alt modes. The large cannon simply turns into a gun for his robot mode, while the other can be used as a shield. I dig both of these accessories a lot. The gun is big and beefy and has a rather distinctive low-slung armor plate. The shield is rounded and has a notch out of the top that reminds me of a riot shield. The shield piece can also be pegged onto the back, but it isn’t meant to be, which means it can fall out pretty easily. I think this is the biggest shame about the figure design, as it looks really good on the back, gets it out of the way when not being used as a shield, and it would have been really easy for Hasbro to have seen this opportunity and make it work. When I display these guys in robot mode, I will likely have two with the guns and shields and one with just the gun. Of course all of these pieces can also be combined together for the camera mode, so let’s check that out.

The camera mode is achieved by transforming each of the figures into the same folded up block and then sticking them together so that the middle one faces front. Next the three shields combine together to form the lens and the three guns combine to form the tripod, which then attaches to the camera using one of the aperture pieces. It’s very clever and overall it looks pretty good, but it’s not nearly as detailed a camera as the old G1 toy. And I’m totally OK with that, because the sacrifices were made to allow each of the bots that form it to look identical. Maybe Hasbro could have tossed in a few extra pieces to tack on and make it more convincing as a camera, but I’m totally fine with it the way it is. Also, it’s roughly the right size to give to one of the Titans like Metroplex or Fort Maximus, but really too big for any of the smaller bots.

Never in a million years did I ever think Hasbro would revisit these guys. Hell, even the first time the early pictures of him, I didn’t think the camera mode was going to be ab option. As a result, I can’t  tell you how many times I almost pulled the trigger on one of the many third-party Reflectors on the market. In the end, I’m glad I didn’t, because Hasbro’s Deluxe Class treatment scratches that itch perfectly, and for a lot less money. These guys were a bit hard to find at first, because most everyone was looking to grab three of them, but I was eventually able to get all three online for a couple of bucks under retail, and that ain’t too shabby. They’re a great little team, and I think they look fantastic when displayed with the Siege Decepticons.