Yeah, it was all the way back in February when I first dipped into this wave with a review of Silver Sable. Of course, in my defense, my life turned to shit somewhere along the way and I was forced to put FFZ on hiatus. Now I’m back in action, more or less, and ready to wrap this puppy up. Let’s have a look at the Kingpin Build-A-Figure! Oh, boy have I been looking forward to this guy! 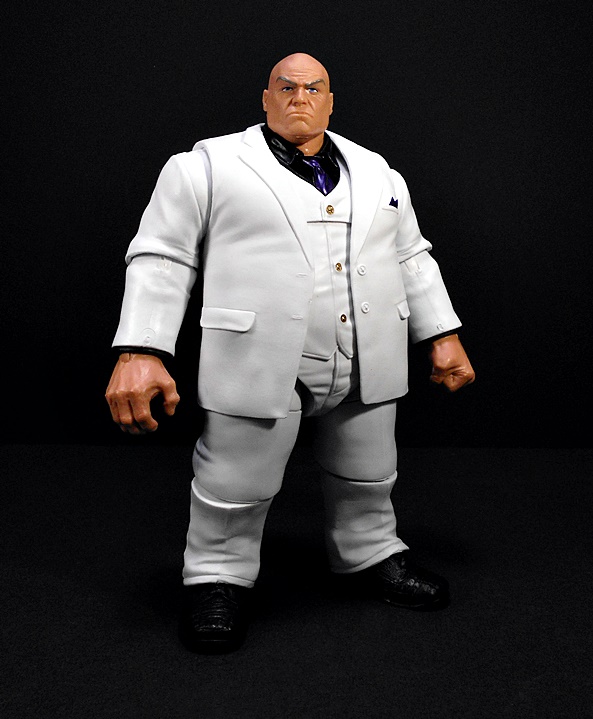 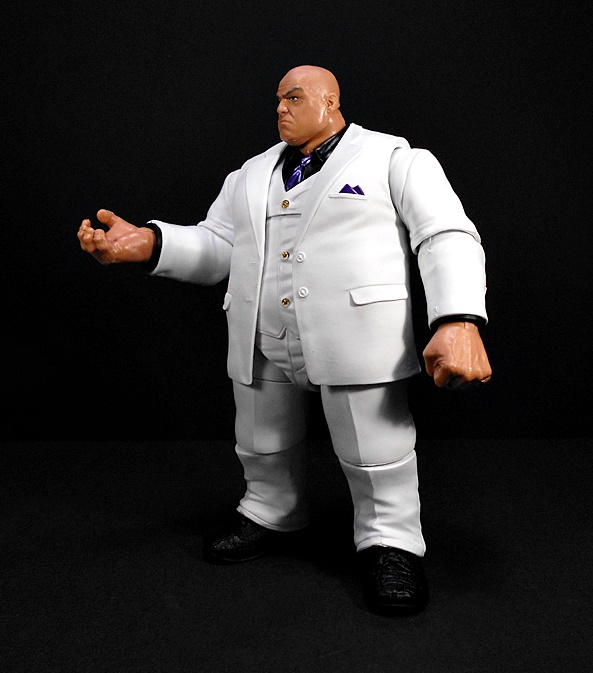 And here is Fisk in all his rotund glory. Kingpin is comprised of your six basic BAF parts: Torso, arms, legs, head and a few extras, which we’ll look at in a minute. He dons his trademark white linen (plastic) suit. Yeah, it surprises even me that I can get this excited over an action figure of a big, bald guy in a suit. But, as a character, Kingpin has a sense of frightening gravitas about him, and this figure conveys that perfectly. Indeed, this bulbous buck makes him look like an absolute powerhouse! The suit consists of a sculpted vest with a collard shirt and tie peeking out the top. The buttons on the vest are neatly painted gold, the shirt is black, and the tie is purple. The trousers show some sculpted rumples, especially where they rest on his giant black shoes. The suit’s coat is the usual trickery, where it is sculpted without sleeves and the sleeves are sculpted as part of the arms. In this case, it’s a little obvious, but I still dig it. Some other nice sculpted details include the ring on his left hand and the neatly folded handkerchief that’s sculpted peeking out of his coat pocket. 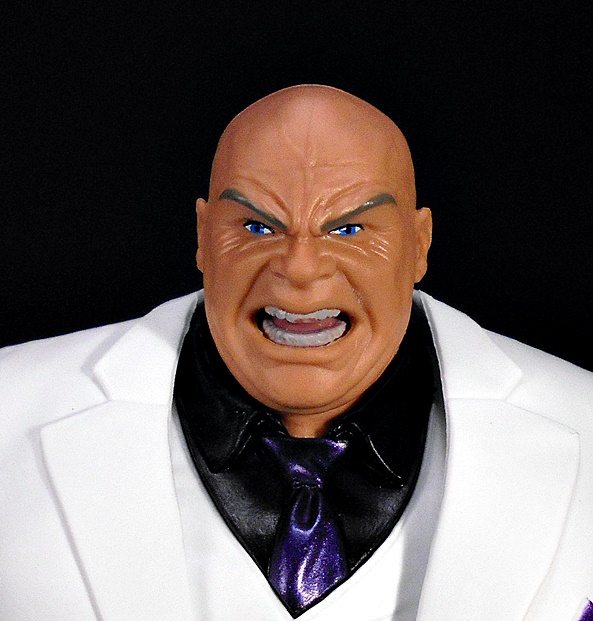 Kingpin comes with two heads, and they are both outstanding. The first portrait exhibits raw determination, and while I know this is a comic based sculpt, I can’t help but still see some of Vincent D’Oonofrio in there. I’m not sure if that was intentional, or if I’m just seeing it because he’s pretty much irrevocably connected to the character because of his amazing performance as Kingpin in the Daredevil series. Whatever the case, I dig it a lot. The second head, is pure rage and will work for pretty much any action pose I’m going to put him in. 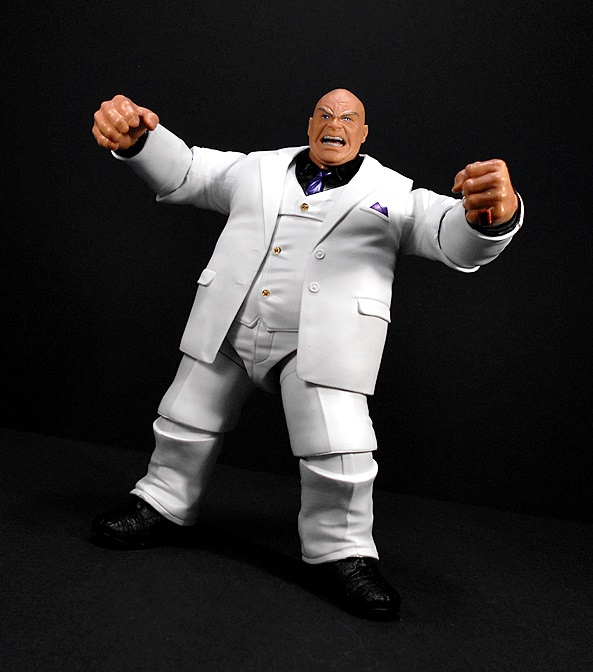 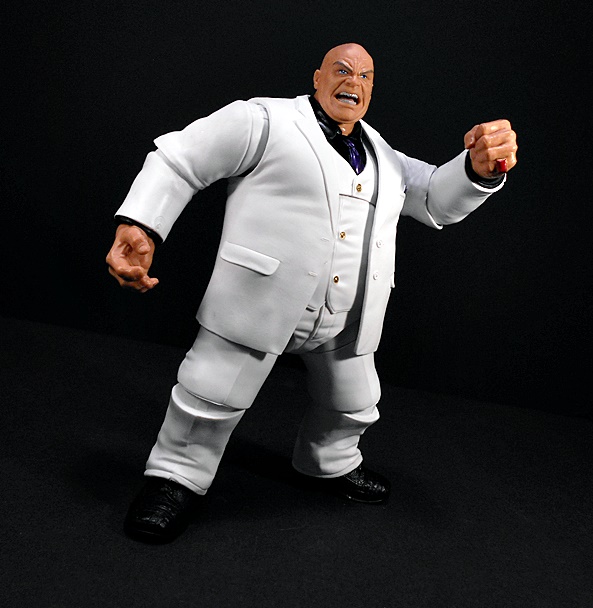 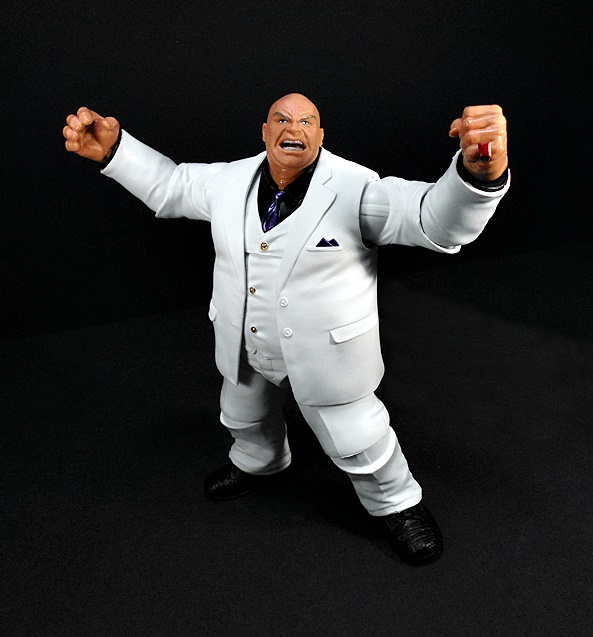 As for articulation, Fisk has all the right points, but because of his portly sculpt, there’s some real limitations here. The arms work well with rotating hinges in the shoulders, elbows, and wrists. He also has a ball joint in his chest, but I can’t do too much with it. The legs are the most stymied. Even though they have rotating hinges in the hips, knees, swivels in the thighs, and hinges in the ankles, there’s still not a whole lot of range of motion there. That’s not really a complaint, as it’s totally expected. Finally, the neck has both a hinge and a ball joint.

Finally, Fisk comes with his cane, which is a simple accessory but looks great. It features a sharply tapered staff with a gold fixture to hold the frosted diamond at the end of it. He can hold it in his right hand, but in order to get a firm grip on it, he has to hold it right at the base of the gold fixture, otherwise it just slips out. 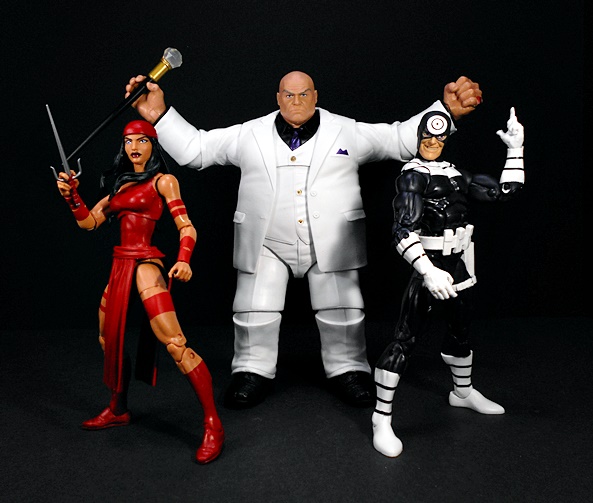 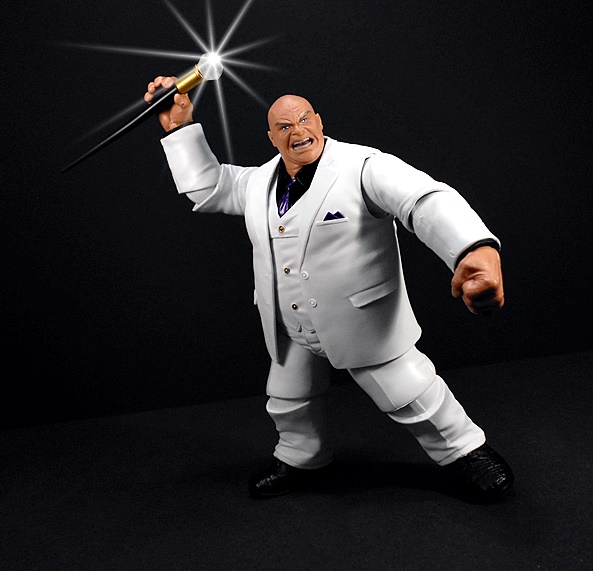 I can’t remember the last time I was looking forward to completing a BAF as much as this one. Kingpin is a villain that has been sorely missing from my Legends collection, and I’m happy to say now that he’s here, he’s absolutely fantastic. Clearly, a Build-A-Figure was the only way they were going to do him justice, and it was worth all the work to get him!

As for the wave itself? I’m not going to lie, this one was a real mixed bag for me. I couldn’t have cared less about Red Goblin or the modern Symbiote Suit Spidey. Black Cat is always a favorite of mine, but I’m just not a fan of this suit. On the flip-side Puma, Night Thrasher, and Silver Sable were all excellent, and Six-Arm Spidey is just a cool figure. Those last four were probably the only figures I would have purchased if it weren’t for needing those BAF parts, and Spidey didn’t even come with any! Ah, but who cares? I have my Kingpin completed, and it feels good to put another wave to bed.