Here we go, folks… it’s my absolute last, cross-my-heart, really mean it this time, figure for me to open in the Kingpin Wave. I was really tempted to build Fisk last week and review him, because Spidey here doesn’t come with a BAF part, but I decided to go ahead and finish off the wave before enjoying that sweet, sweet victory of building the Kingpin BAF. So let’s go ahead and have a look at Six-Arm Spidey! Oh yeah, I’m a little pressed for time today, but I think I can give this figure its due relatively quickly. 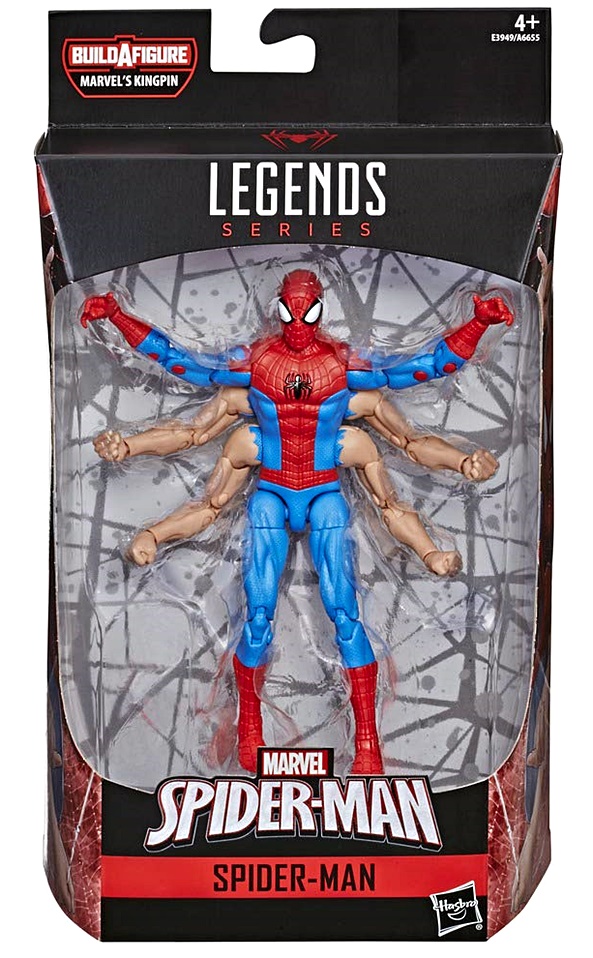 For Peter Parker to live, Spider-Man must die!!! The “Six-Arms Saga” is one of those wonderful, inspired, and bat-shit crazy comics that makes me wish I was born ten years earlier so I could have experienced it as it was happening. Sadly, it debuted on the comic stands the year before I was born, and I would have to wait another dozen or so years before carrying the first of these issues home on my bike from the used bookshop downtown. It gave us some genuine body horror, it introduced us to Morbius, The Living Vampire, and it was a helluva great ride. Oh, how happy I was when Hasbro decided to toss us this figure!

And yes, there is something that is both inherently silly and horrifically creepy about this guy! And given the nature of this figure, let’s talk articulation first! The figure is built around a newly designed trunk, which omits the usual waist swivel and ab-crunch in favor of four extra “shoulder” joints sticking out of his sides. So in terms of articulation, this is a “lose some to gain some” kind of scenario. Which is perfectly understandable given the design challenges. The two new sets of arms are bare with ragged pieces of Spidey’s suit painted around the “shoulders” to show where they <gasp> broke free of the suit while they were growing out of him. Each of these arms share identical articulation with Spidey’s regular arms, so you get rotating hinges in the shoulders, swivels in the biceps, double-hinges in the elbows, and hinged pegs in the wrists. The regular hands are both thwip hands, while the four new ones are all balled into fists. The rest of the articulation amounts to the usual stuff. You get ball joints in the hips, swivels in the thighs and lower legs, double-hinges in the knees, and both hinges and lateral rockers in the ankles. The neck is both ball jointed and hinged.

The suit itself is wonderful. It consists of the bright blue and red deco that I’ll always love the most. The red parts feature a web pattern, which is sculpted but not painted in. The spider emblem on his chest and back are sculpted and painted black, and as has often been the case, the hinges and pins in the wrists and elbows are left as bare red plastic and not painted to match the blue. Yeah, this is always a bone of contention with some people. Honestly, it never really bothered me much. Finally, the head features that same sculpted, but unpainted, web pattern and two big ‘ol white eyes with black boarders. Pure comic goodness!

The figure is loads of fun to play around with, but the absence of the torso articulation definitely limits the things he can do. I also wish he came with extra regular hands. I’m fine with all the extras being fists, but some relaxed hands and fists for his regular arms would have been pretty sweet. I know, they spent a lot more on this guy to give him extra arms and keep all that articulation, so I’m not making too big a deal about it. 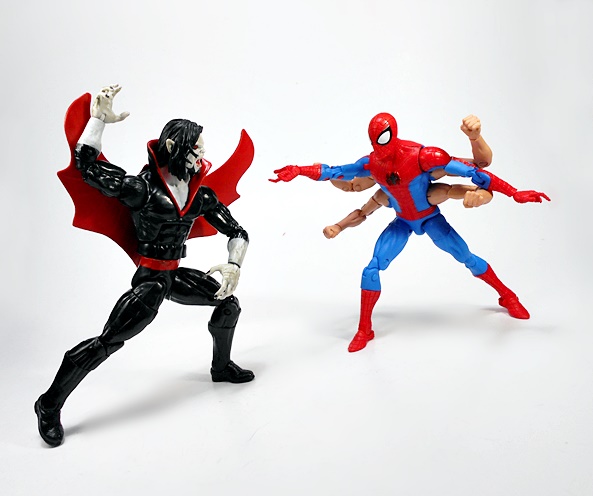 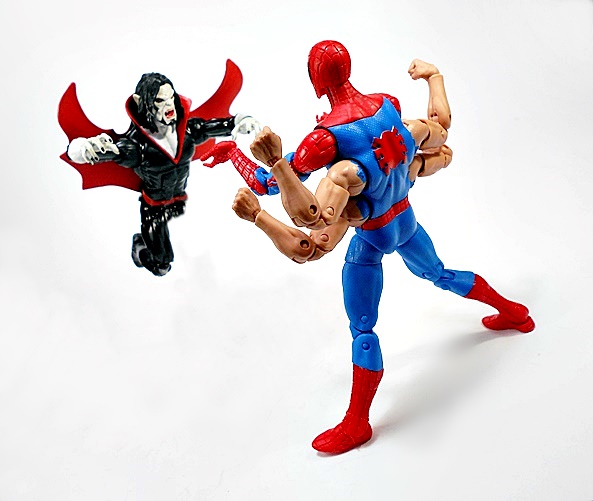 I warned you, today’s review was going to be short, but I honestly don’t have a whole lot else to say about this figure. He’s definitely unique and a welcome addition to my collection. When Marvel Legends returned back in 2013, never in a million years did I expect it to be as prolific as it’s been. And while it’s had its share of Captain America and Iron Man variants clogging the pegs, the real beauty of this line is when it digs deep. Sure, it’s not like Six-Arm Spidey hasn’t resurfaced at least half a dozen times, and in different media, since ASM #101, but how cool is it that Hasbro is still digging this deep? Meet me back here tomorrow and I’ll put this wave to bed with a look at Kingpin!