Only having time for about three posts a week, and having a mile-high pile of toys to open, it sometimes takes me a while to give each line that I collect their due. Case in point, it’s been quite a few weeks since I’ve visited with Hasbro’s Transformers, so I decided to come back to them this week. I was hoping I would get time this week to review the big guy, Omega Supreme, but I’ve barely had any time with him out of the box. Not to mention the time it takes to DIY my pathetic little photo stage to take on a Titan Class Transformer. So, instead I’m grabbing one of the unopened Deluxe Class figures off the pile, and watch out, Decepticreeps, it so happens to be Ironhide!

Leakin’ Lubricants, check out that packaging! I don’t think I’ll ever get tired of the artwork that Hasbro is putting on these boxes, It’s gritty, hardcore, and absolutely fantastic. Poor Ironhide. He’s had such a troubled past. I might have had fun with the original figure had I gotten hold of him before seeing the Sunbow cartoon, but after that all bets were off and I rebuked that poor piece of plastic and die-cast metal for being a creepy little impostor. It wasn’t until Universe 2.0 that Hasbro would try to give us a proper G1-styled Ironhide, and that’s a figure that sure as hell hasn’t aged well. Indeed, I sold mine off the moment I saw this guy was coming. So here we go again, Siege brings us a new Deluxe Ironhide, and this line has been all about the G1 homages, so let’s rip him open and see how they did. We’ll start with the alt mode! 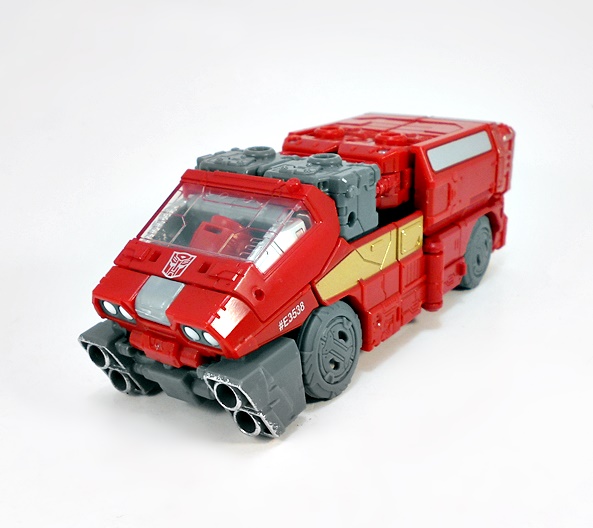 Siege is all about more Cybertronian-looking alt modes, and as such Ironhide is sporting a very utilitarian space truck mode. Some of these modes, like Hound’s, tend to be pretty f’ugly, but when you’re designing self-propelled alien combat vehicles, you kind of get a pass on the design department. Now, with all that having been said, I like what we got here. Ironhide is a rugged, armored vehicle, with just enough nods to his Earth van mode, that it works quite well for me. Granted, this mode looks unfinished, it doesn’t conceal a lot of the engineering, and anyone who has transformed their share of these figures is going to see what’s going on here right away, 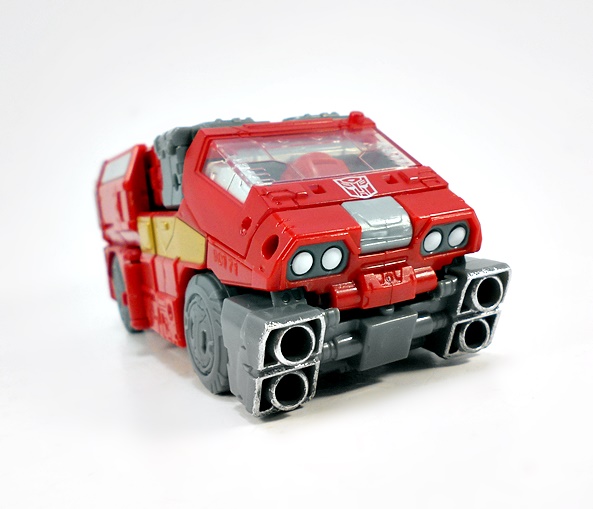 It’s pretty obvious, to me at least, that the arms are up top behind the windshield, and that the slab on the back are going to be the feet. He transforms super quickly and the only step that’s even slightly complex is twisting the canopy piece 180-degrees to orientate it for the chest. The coloring is mostly carried by the red and gray plastics, but there’s some silver and gold in the mix too. The silver brushwork on the bumper looks great. Indeed, I do absolutely adore the way the front of this mode looks. With the high positioned canopy, the quad headlights, and those giant tubes on the bumpers, that must pack some serious firepower. It’s sort of a shame that the back of his head has to be so prominently visible through the windshield, but I guess them’s the breaks. In the end, Ironhide comes across as part Killer Moon Buggy, and part Armored Personnel Carrier. Yup, I dig it! 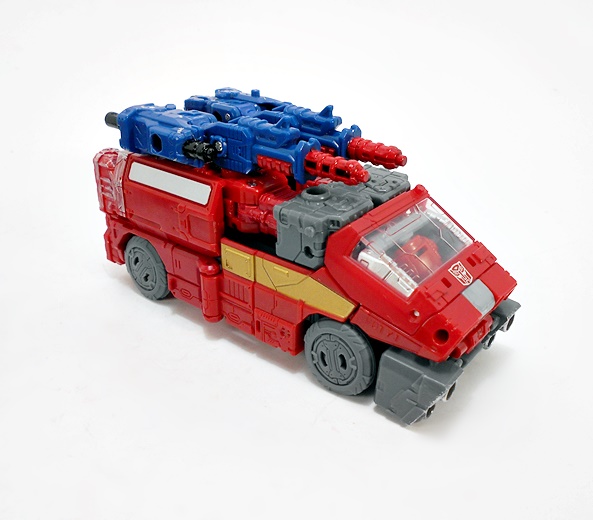 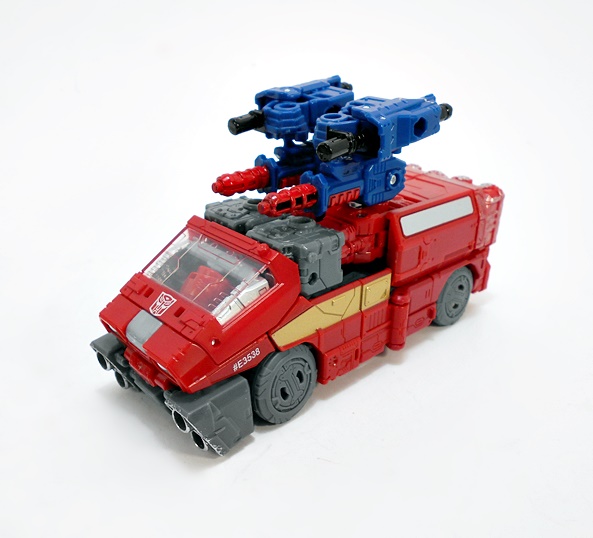 There are also some useful pegholes on this guy, so you can not only equip him with his rifle, but if you can use some of them weaponizer parts you may have lying around. I like to rip off Cog’s arms and pop them on top for added firepower. Let’s move on to the robot mode! 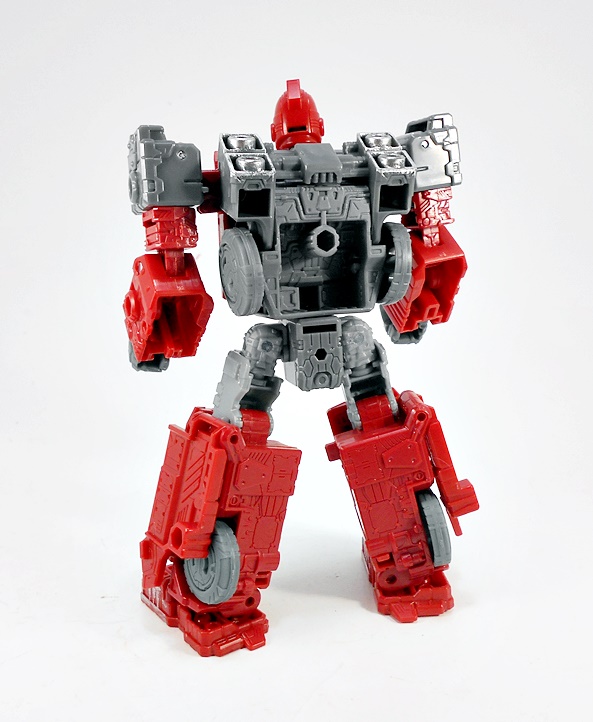 As with the alt mode, Ironhide’s robot mode takes it’s share of liberties with the G1 aesthetic. He’s not as pure an update as, let’s say, Siege Hound or Sideswipe, but the key points are there. He’s still a very beefy and boxy bot, and the windshield is right where it belongs in his upper chest. It just isn’t configured in quite the same way, laying flat instead of having the familiar angle.  Does this bot mode still work for me as Ironhide? Hell, yeah it does. It just looks like he got a little extra tweaking when he was reformatted for his Earth mode. From the back he does look rather hollow in the torso, but most of the rest of him fills out nicely. There are a few QC issues, here involving the folding panels on his legs. They don’t want to stay in the friction notches and frequently pop out out during transformation, which is apparently common for this figure. Also, they are supposed to tab into place, but they won’t stay put. Neither of these issues are huge problems, but they can be annoying. 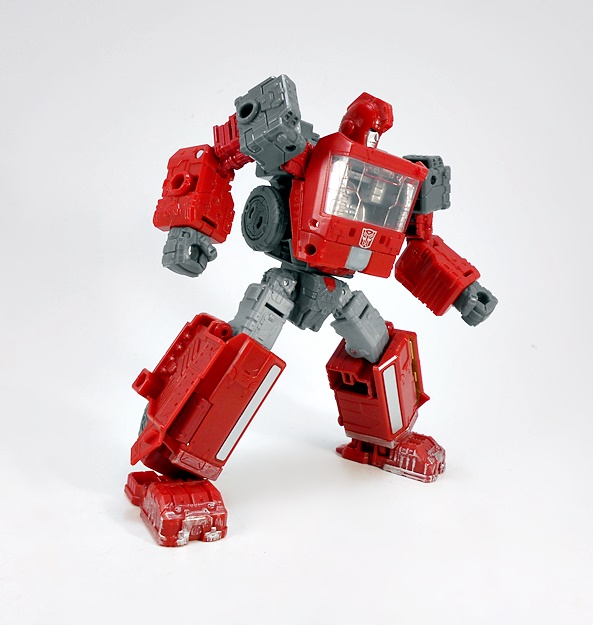 Besides the windshield chest, there’s other stuff for me to love here. I really dig where the wheels wind up. The fronts are tucked into the sides of his torso, and the rear wheels are mostly obscured by folding plates in his lower legs. The result is a super clean robot mode, that only really offers up the kibble that it wants you to see. The coloring here is mostly the same as his alt mode, minus the gold which is now concealed. You do get that nice silver on display behind the windshield, some striping on the lower legs, and a rather reserved bit of silver weathering down near his feet. 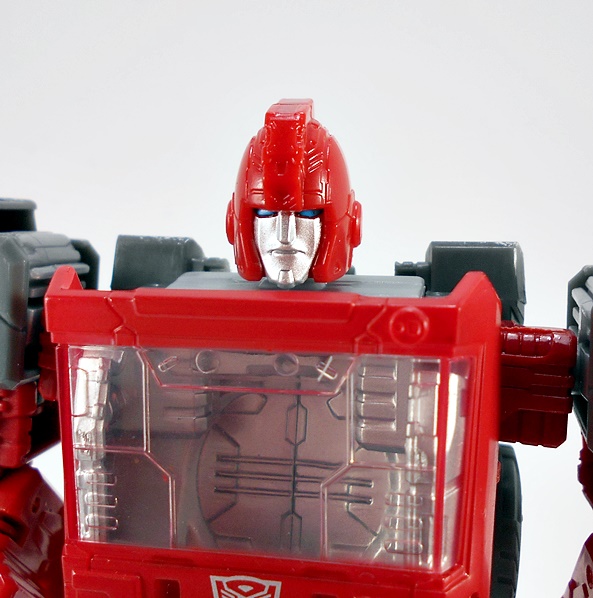 The head sculpt is totally on point for the G1 animated look. from the circular “ears” to the prominent mohawk ridge on his “helmet.” My only complaint here is that his chest piece obscures a bit of his chin, and since he can’t look up, if you hunch him over to better see his face, he’s looking down. Ironically, the Universe 2.0 figure had a similar issue. 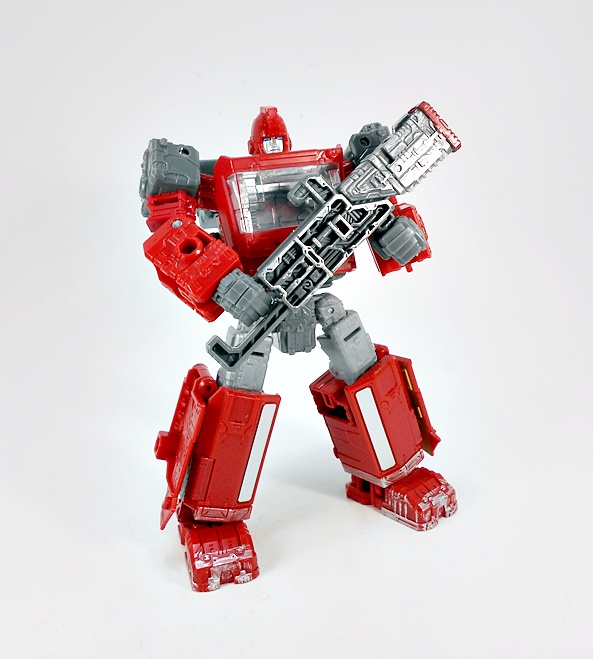 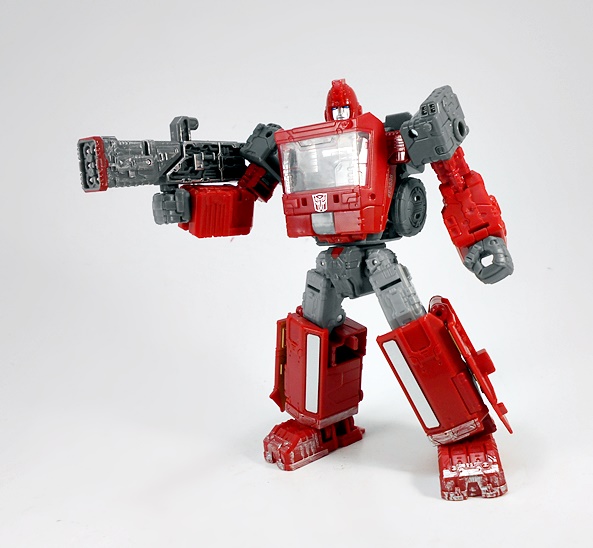 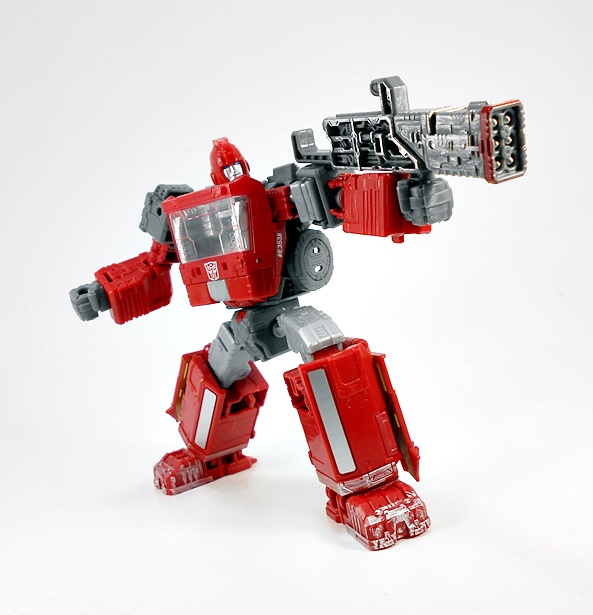 Ironhide comes with what I can only describe as a rocket-launcher rifle to assist him in busting Decepti-chops. This weapon is as chunky as it’s wielder and I love all the hyper-detail in the sculpt, not to mention the weathering. Unfortunately, it’s a little difficult for him to hold it properly. The stock is way too long to fit into the crook of his elbow. Still, it’s a great looking piece. He can hold it in either hand, and it can also be pegged in to make an arm cannon.

Ironhide can also sling the rifle across his back, thanks to a well-placed peghole. Plus, the weapon is hinged near the center so it can be transformed into a… um… rocket hammer? Sure, why not? 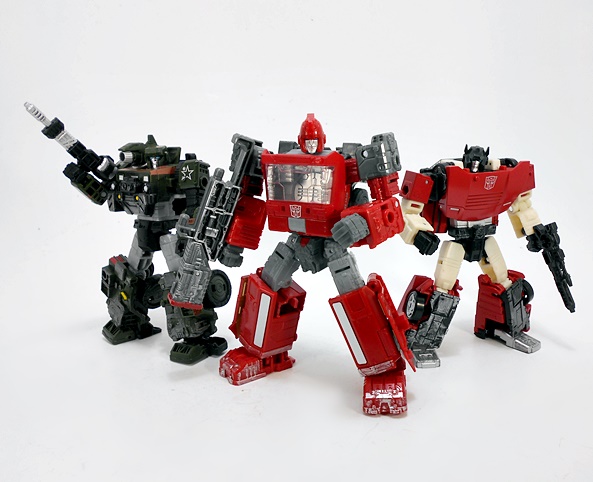 I didn’t go into this figure with a lot of excitement, because Hasbro’s initial pictures didn’t do anything for me. But now that I have him in hand, I find myself liking him quite a bit. The alt mode isn’t the best thing around, but it gets the job done and it works well for what it is. As for the robot mode, well as a G1 homage, I don’t think it holds up as well as Hound or Sideswipe, but it still looks great, and there’s no doubts about who it’s supposed to be. So far, Siege has yet to let me down, and every time I open another one of these figures, it just fuels my excitement for more. If that’s not the best compliment that I can pay to a toyline, I don’t know what is.