Who’s up for knocking out another wave of Marvel Legends? I know I am! And that goes double for the Lizard Wave, which I started reviewing all the way back in April of last year. Holy hell, that’s a long time… even for me! But then outdated reviews is going to be something of a running theme for me in the months to come as I struggle to catch up. So, today I’m going to open up the last figure in this wave, and then I’ll be back tomorrow to have a look at the Build-A-Figure. 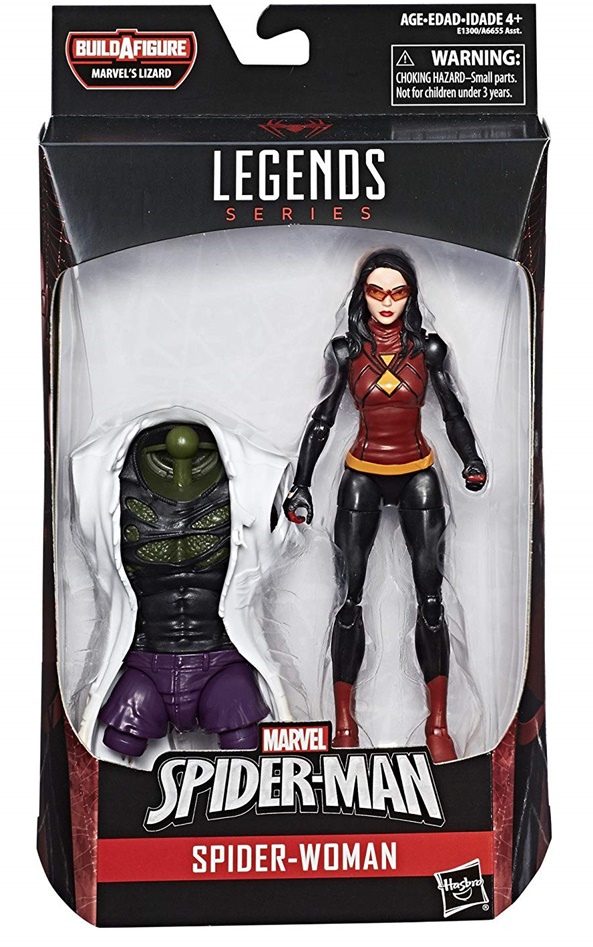 For me, the final figure is Spider-Woman in what I believe is her fairly modern look? As many of you probably know, I have assumed the healthy posture of tapping out of modern Marvel Comics until they decide to get good again. Until then, it’s a steady diet of DC, Zenescope, and lots of Marvel back issues. Nonetheless, I do recognize this look as Jessica Drew after Secret Wars 2 from several years back and when she was prego. Hasbro opted to show mercy and give us a non-prego version for the action figure. Thank Hasbro for small favors. 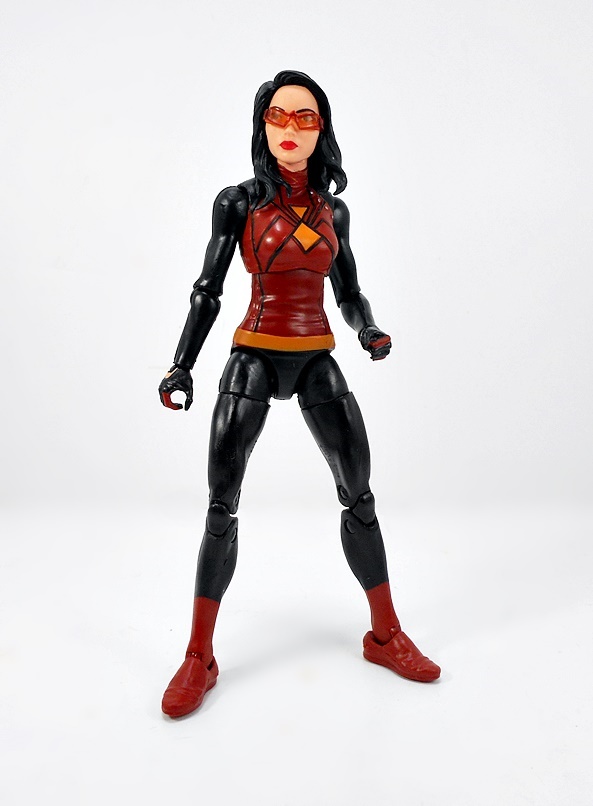 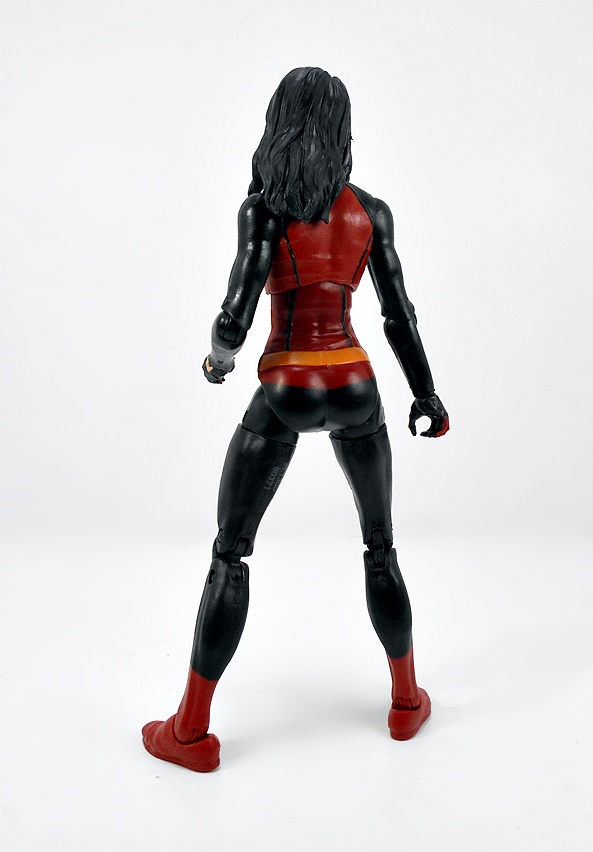 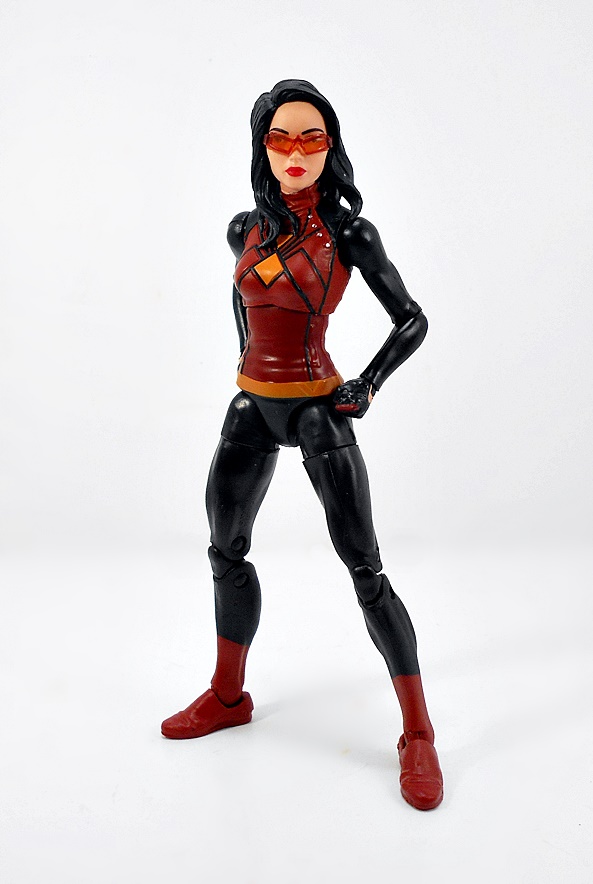 I happen to really dig this costume a lot. It looks great in the panel art and it works really well here as an action figure. I’m also a little impressed at how much fresh sculpting Hasbro decided to do for her. Sure, there’s nothing new on the arms and legs, but almost all the detail on her tunic is actually part of the sculpt. There’s some black piping running down the sides, which splits off to form a spider-like emblem in the chest with two orange geometric shapes. It’s a fresh and abstract design and considering some of the other visual choices made in the pages of modern Marvel comics, I’m surprised to see something that looks this good. I’m also a big fan of the row of silver buttons off the left shoulder where the tunic buttons up. The outfit is tied together by a simple orange belt. The paint applications are overall pretty sharp, and the muted colors are another nice departure from the usual bright palate. I could see this costume making the transition from page to the big screen without too many necessary tweaks. 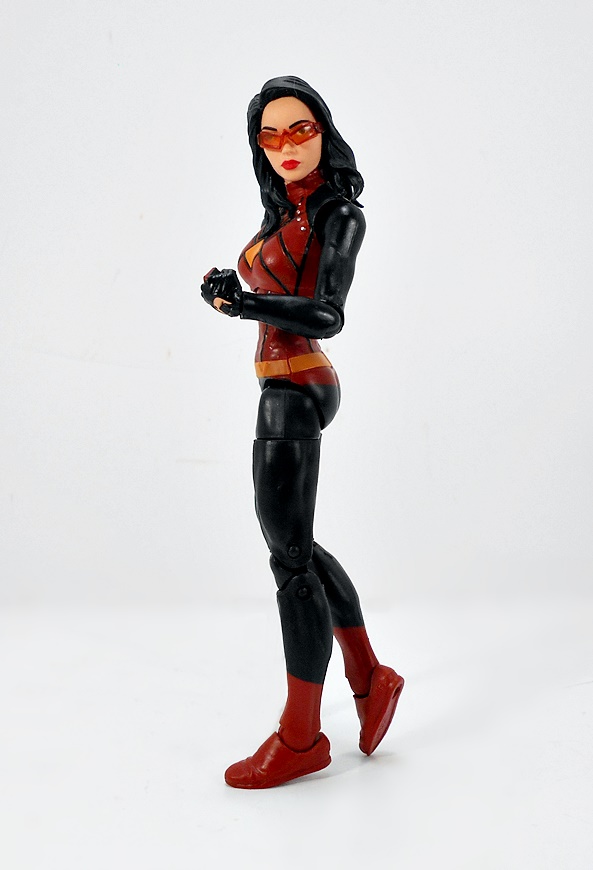 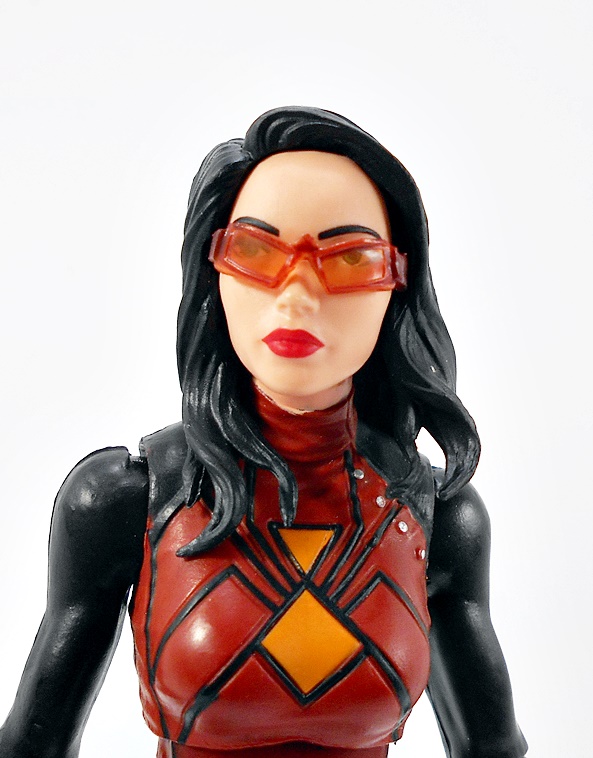 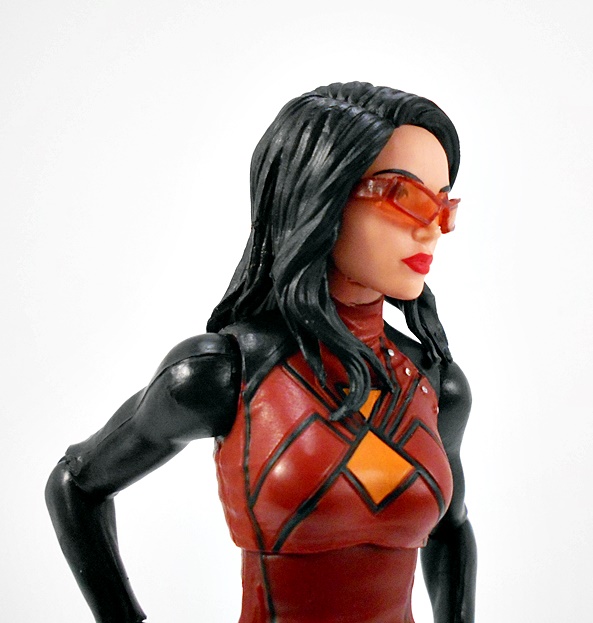 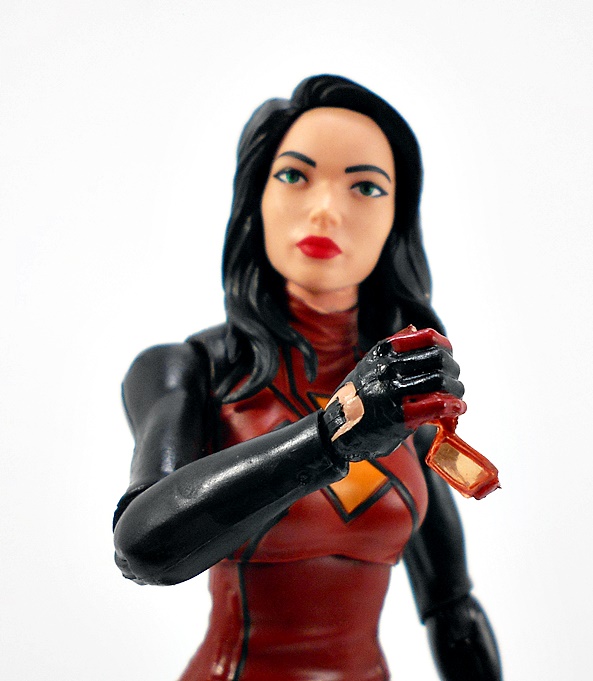 The portrait here is also well worthy of praise and a big part of the credit has to go to this incredible little pair of orange tinted sunglasses. Yes, these are sculpted separately from the head and can be removed simply by sliding the arms out from between her hair and head. They fit pretty well and look good, neither of which is easily achieved at this scale. The underlying portrait is also one of Hasbro’s better ones, at least for a comic-based character. She’s pretty, the paint applications on her lips and eyes are all sharp and straight, and I dig the way the hair is sculpted to fall about her shoulders. 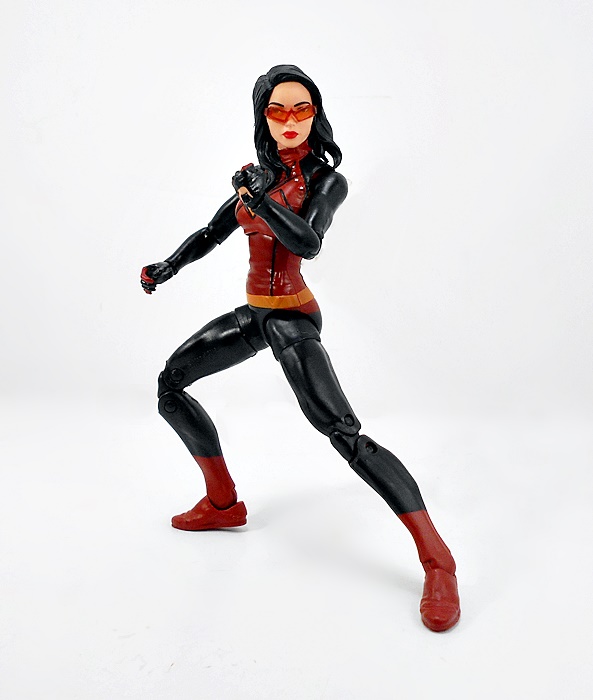 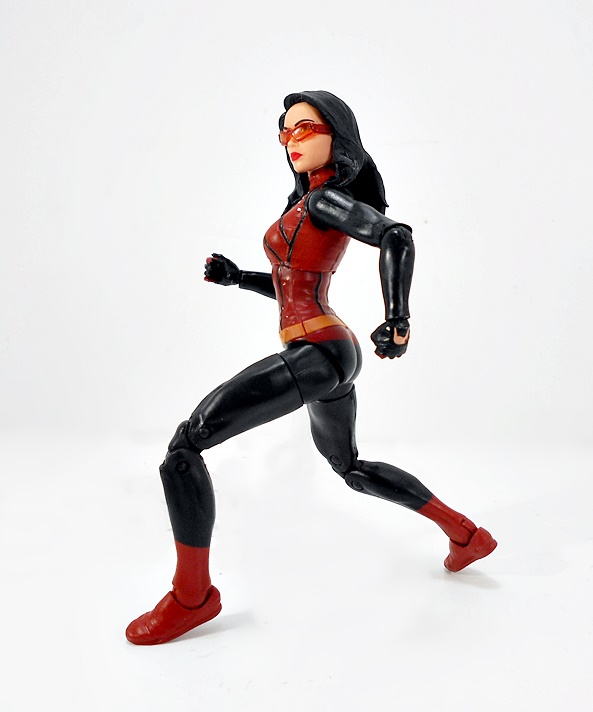 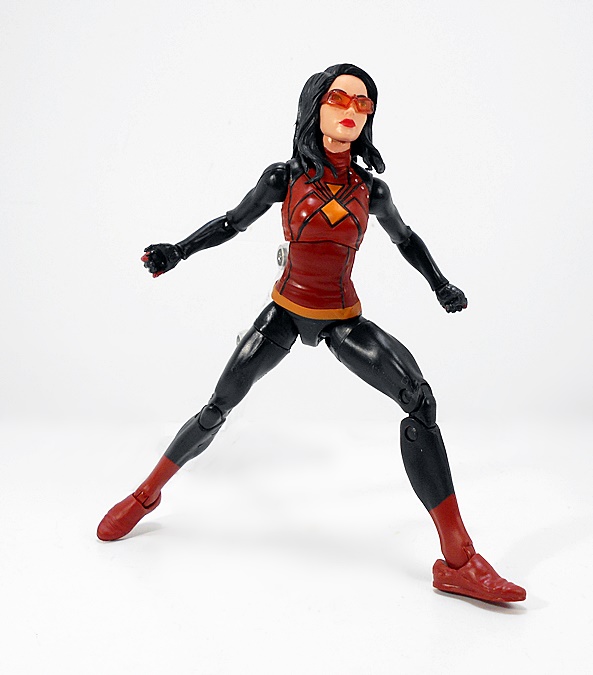 If there’s anywhere this figure falls short, it’s in the articulation. Not that what’s here is any different from other Marvel Legends gals, but I really think it’s time that Hasbro gives the ladies the same arm articulation that the dudes get. Instead of double-hinged elbows and bicep swivels, Jessica gets by with rotating hinges all around… shoulders, elbows, and wrists. She also lacks a waist swivel and instead has a ball joint under her chest. At least the legs are par for the course with rotating hinges in the hips, thigh swivels, double-hinged knees, and both hinges and lateral rockers in the ankles. Finally, the neck is both hinged and ball jointed. 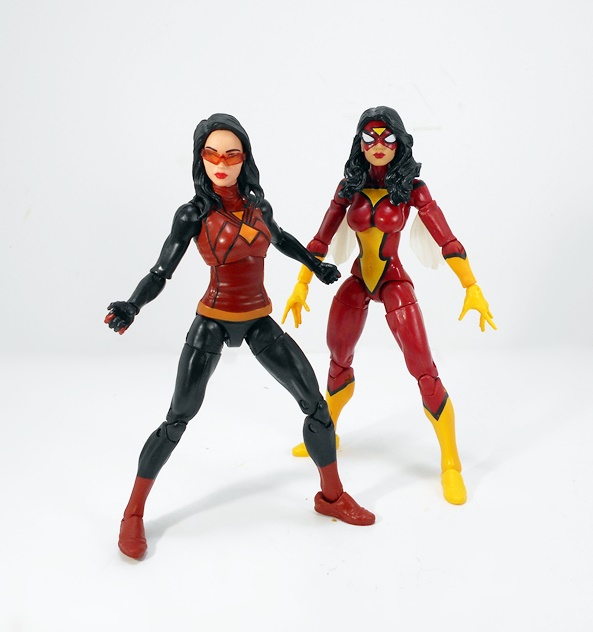 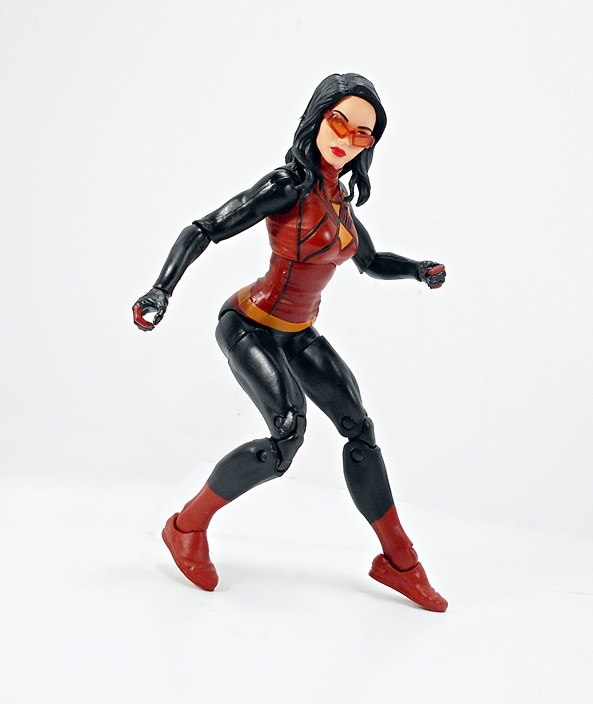 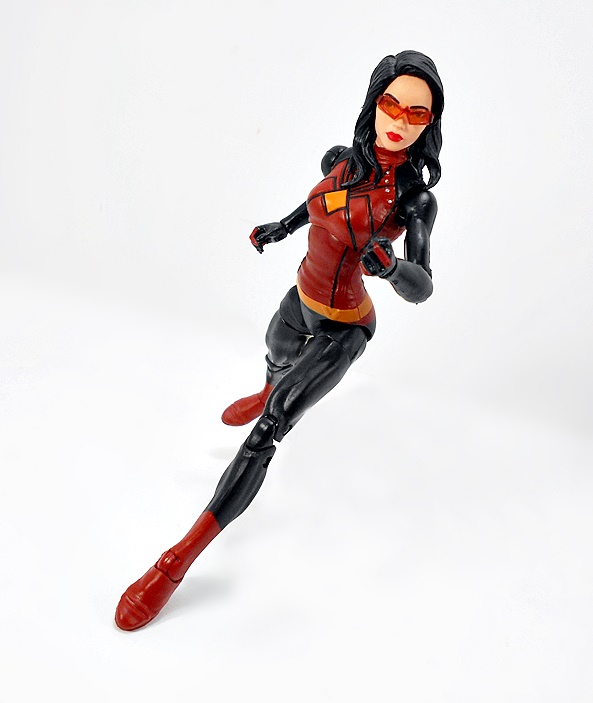 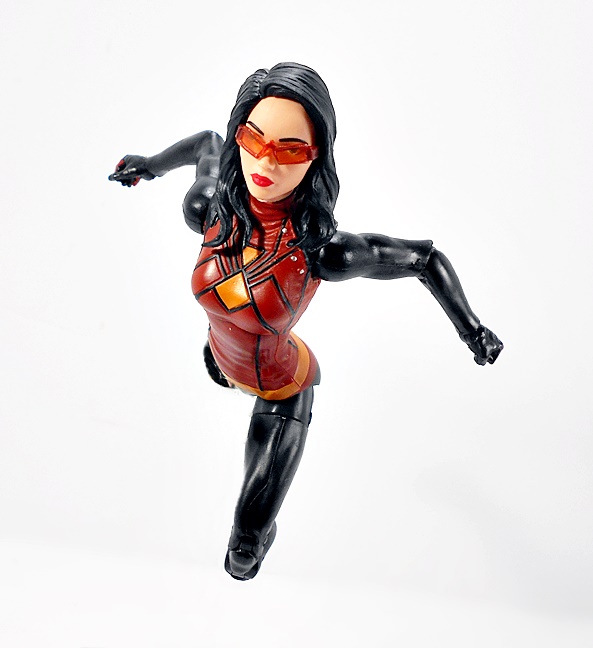 I can’t say as I was terribly excited about this figure going in, other than the fact that she had the last piece for my Lizard BAF, but now that I’ve opened her up and played around with her, I think she’s one of the high points of this wave. No, this look will never be my Jessica Drew, but I still dig it. It’s the one-two punch combination of a great costume design and great execution. And you can’t ask for much more than that. And with the individual figures of this wave finally under my belt, I’ll swing back tomorrow and have a look at The Lizard Build-A-Figure!