So, the other night I re-watched Solo on Disney+ and about half way through it I got up, dug out all the Black Series figures from the movie that were on my Pile of Shame© and had a hell of a time ripping them open while finishing the movie. And since I did that, I thought I’d go ahead and start reviewing them in pairs. I’ve already looked at quite a few figures from the film, and today I’m pressing on with Han Solo in his Mudtrooper uniform and his new found friend, Chewbacca. 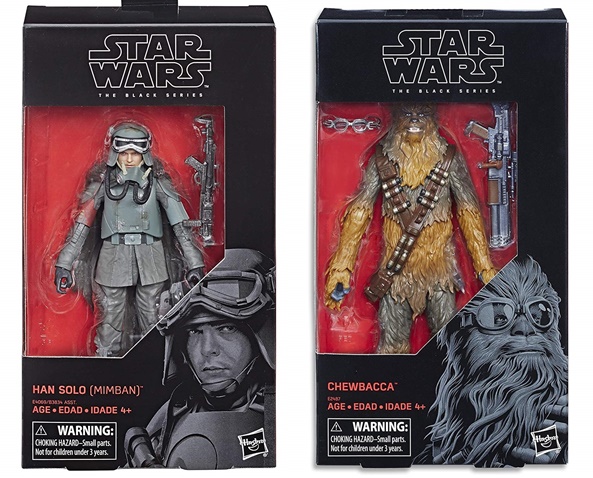 Of all the Star Wars films, both good and bad, Solo feels like the one that just kind of came and went. The lead up to its release seemed to be dominated by talks of messy production and re-shoots, but once it hit the theaters I don’t recall hearing much about it, other than it was a disappointment for Disney at the Box Office and it resulted in them tabling any future plans for the Star Wars Story films. Me? I enjoyed it quite a bit in the theater and I’ve probably watched it two or three more times since it hit Blu-Ray. And now that I find myself casually viewing it again on Disney’s streaming service, I have to say that it’s held up just fine each time and other than a certain shoe-horned cameo at the end, I’ve got no complaints. Let’s start out by looking at Han. 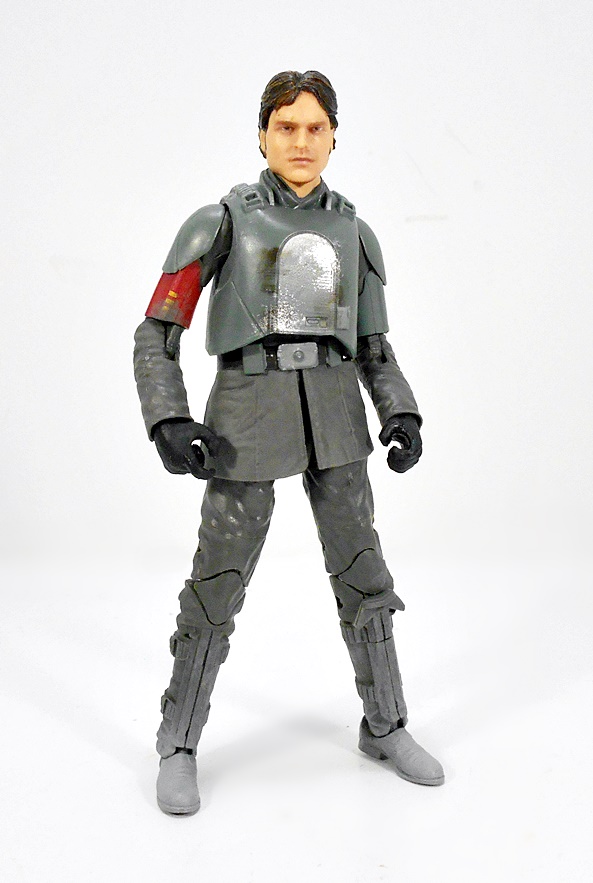 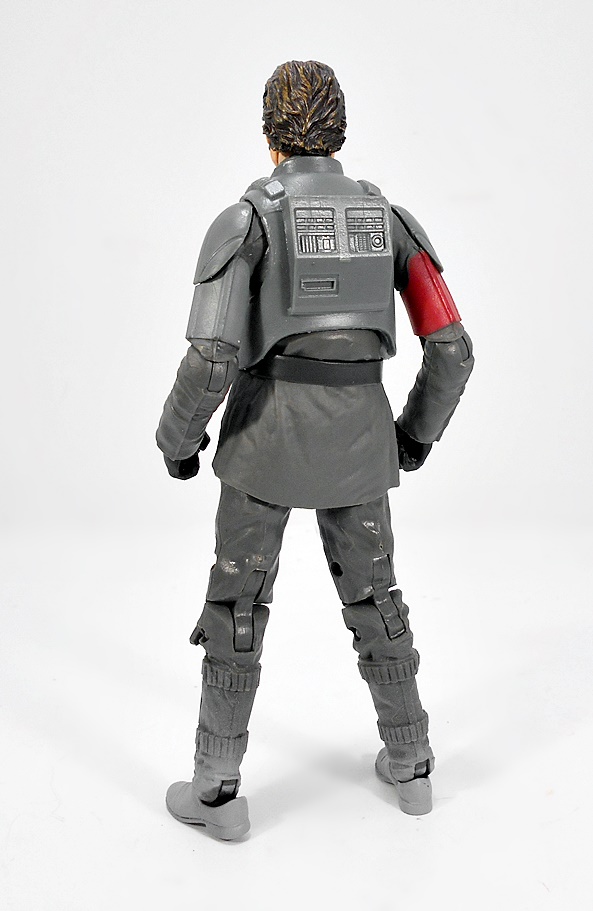 Serving with the 224th Imperial Armored Division, Corporal Han Solo in his Imperial Mudtrooper outfit is a figure that I was anxious to get my hands on. I loved the whole sequence in the film and I really dig this particular uniform. It’s a nice blend of familiar Imperial fashion call-outs with some new stuff thrown in, and Hasbro put an exceptional amount of work into making this figure something special. Here it is stripped down to the basics with the familiar cuirass previously seen worn by the AT-AT Commanders. The backside of the armor features a sculpted backpack sort of thing with some detailed panels. The cuirass is not removable and is sculpted over what looks like a fairly typical Imperial Officer’s uniform tunic, but with added shoulder armor and bicep armor, with the right bicep painted red. The high boots feature a liberal dusting of what is probably supposed to be mud, but it actually looks like it would work well for snow or ash. In addition to the dirtied up boots, there’s some absolutely lovely weathering applied to the cuirass. Even if this was all there was to the figure, I’d have been happy, but there’s plenty of gear to add on to him. But before getting to that… 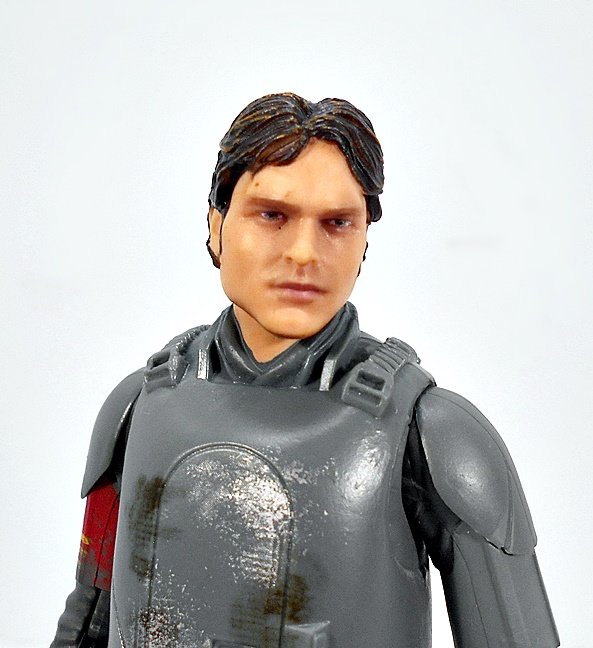 Let’s talk about the portrait! Hasbro has had some troubles in the past getting Harrison Ford’s likeness as Solo quite right, but I Think they’ve had a lot more luck with Alden Ehrenreich. Their first figure from the film looked great, and I think the likeness on this one is another direct hit. The hair and contours of the face are right on the money, as are pretty much all the facial features. And the printing used for the face is also excellent. OK, let’s start loading him up! 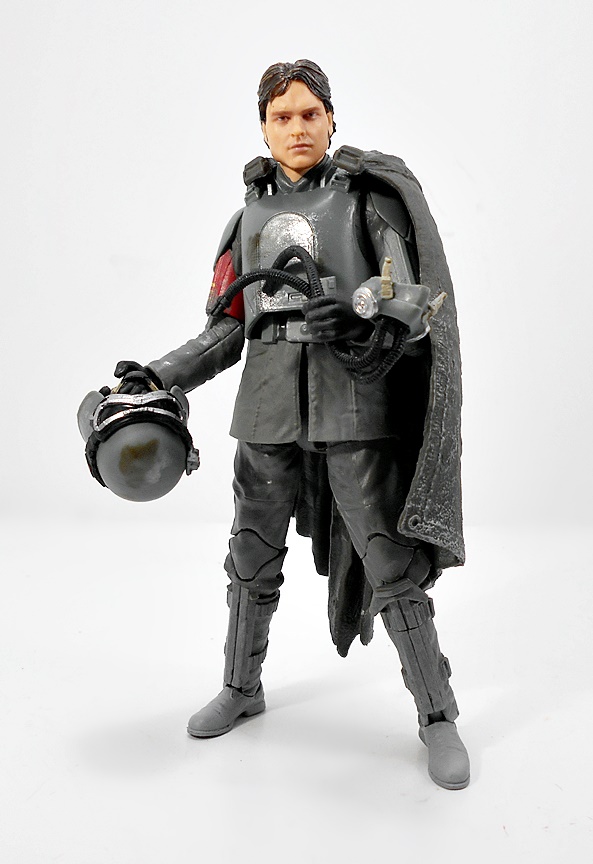 The extra uniform pieces consist of a cape, a helmet, goggles, and a breather mask. The cape features some particularly great sculpting and weathering, and I like that it’s not too cumbersome, because even as it is, it seems like the most impractical thing to include on an infantry uniform. [OK, that was only true until I realized it’s probably a rain poncho and not a cape.] It’s designed to tab into two notches on his shoulders, but mine doesn’t like to do that, which isn’t a big problem because it stays on just fine by hugging his shoulders. 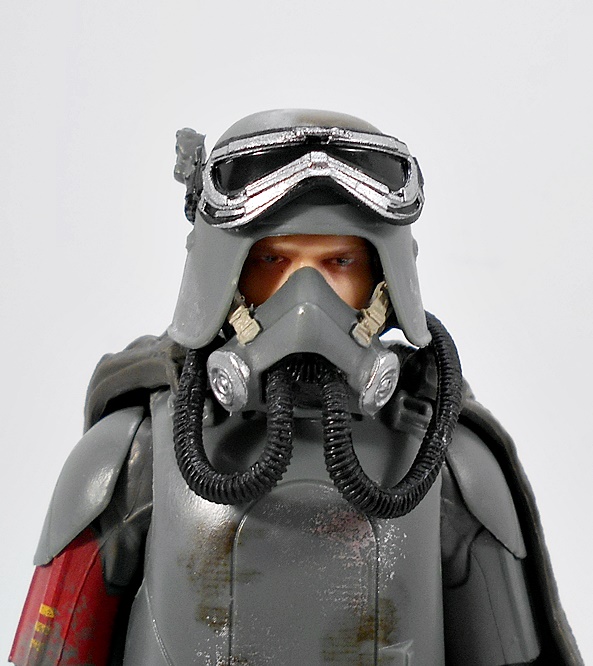 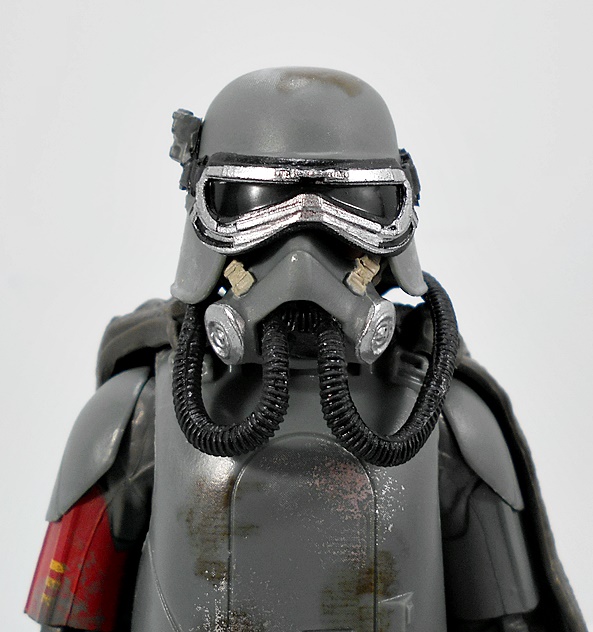 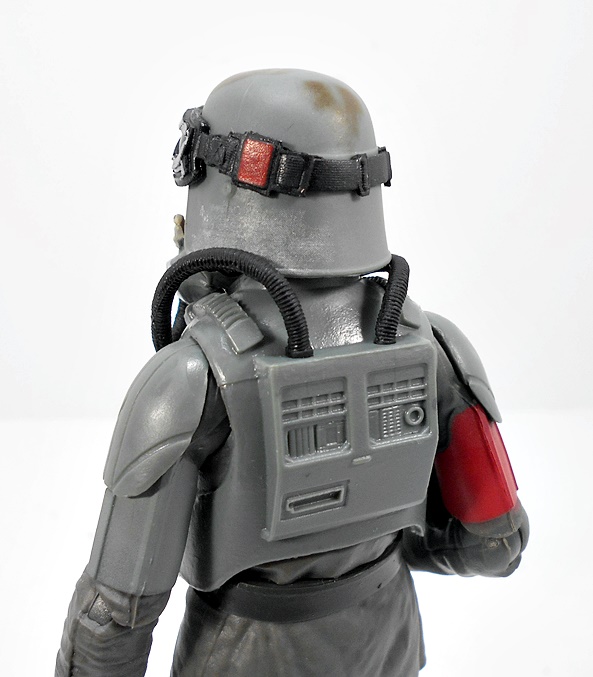 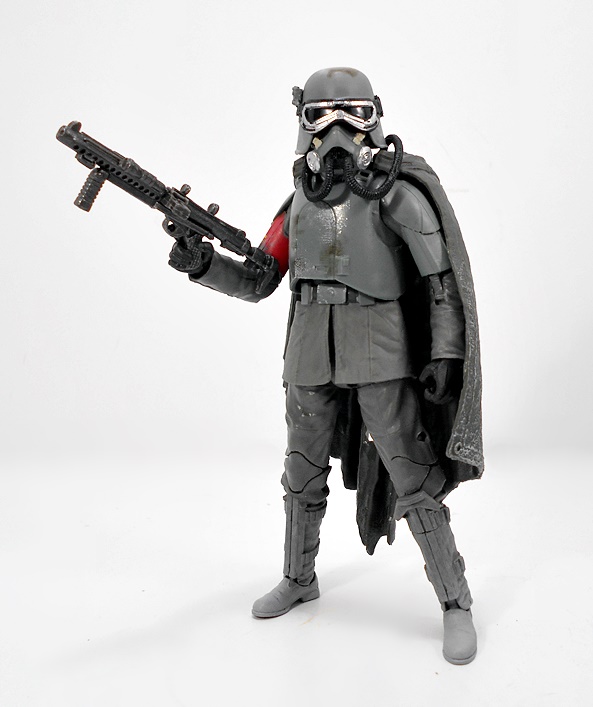 The helmet fits perfectly and includes a chin-strap. The breather mask has two partially sculpted straps that hold it on simply by friction and the tubes run behind the head and plug into the holes on the top of the backpack. Finally, the goggles can be worn up on the helmet or down over the eyes. One of my frequent complaints about the Black Series is that it doesn’t often make use of the larger scale, but here’s a figure that really does. I’m sure all of this could have been done in the smaller 3 3/4-inch scale, but I don’t think it could have been quite as well executed as it is here. I mean, it would have been much easier to just sculpt the goggles, helmet, and mask all as one piece, but I’m happy to see Hasbro rose to the challenge here. 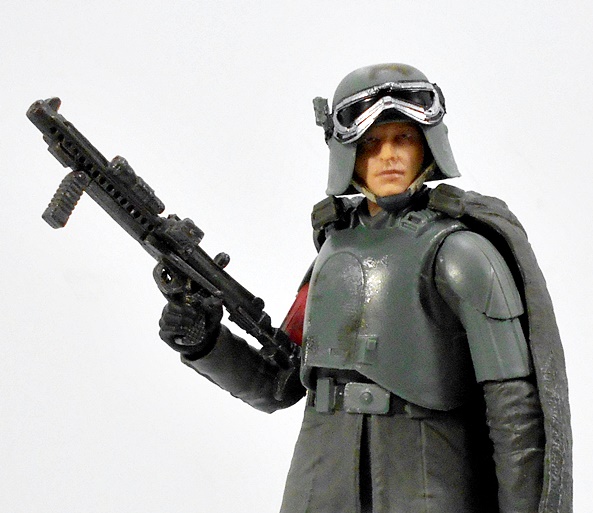 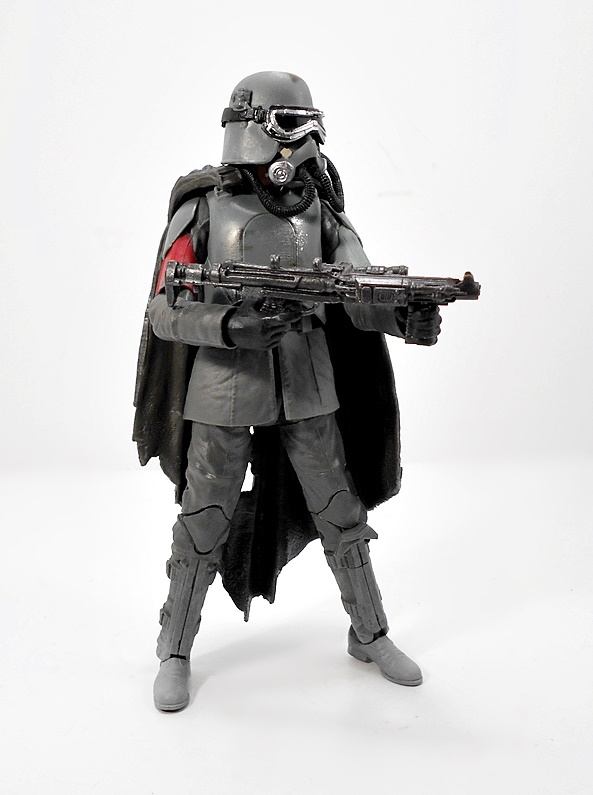 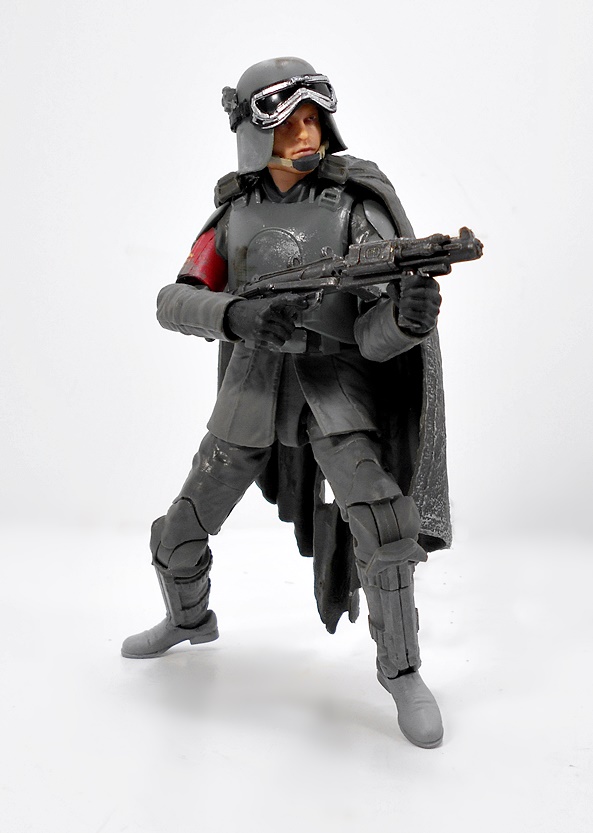 The final accessory in the box is Han’s E-10 blaster rifle. It’s a nice change-up form the usual Imperial small arms and features some great detail in the sculpt. The forearm grip is even folded down so it can be held in both hands. And since I’m looking at two figures today, I’m just going to skip the usual run-down of articulation. There’s nothing new here, and I’ll just say how I wish Black Series made use of double-hinged elbows like Marvel Legends does. The rotating hinges are OK, but I would really like a better range of motion in those elbows. Moving on to Chewbacca… 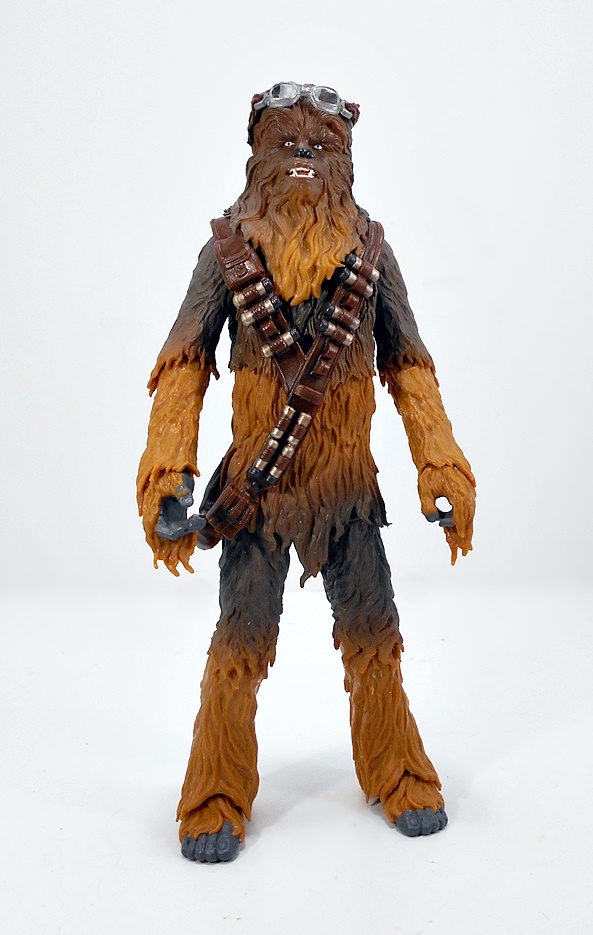 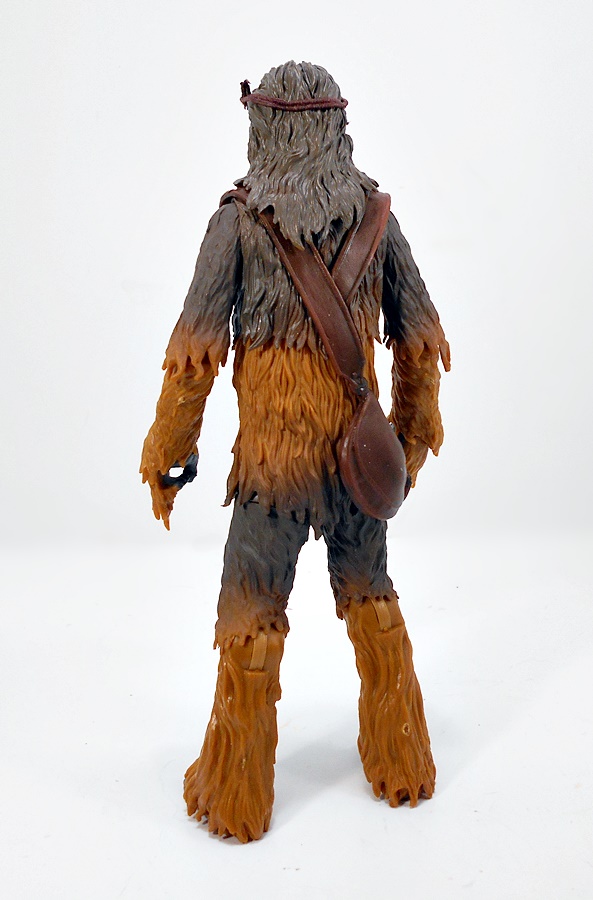 I actually don’t have a whole heck of a lot to say about Chewie here. I was actually going to pass on this figure, but I found it on sale and I decided I needed him to stand beside young Han Solo. It seems to borrow the same body sculpt as the original Black Series Chewie, but with a very different paint job. Gone is the more uniform brown and in its place is a mix of dark brown and light tan. Unfortunately, I don’t think the new paint does the sculpt any favors. It looks very basic and the radical differences in color shades makes this look more like an animated version of Chewie to me. Maybe a wash would have helped. Of course, Chewie’s more familiar bandoleer strap is replaced here with the Y-shaped baldric and satchel. 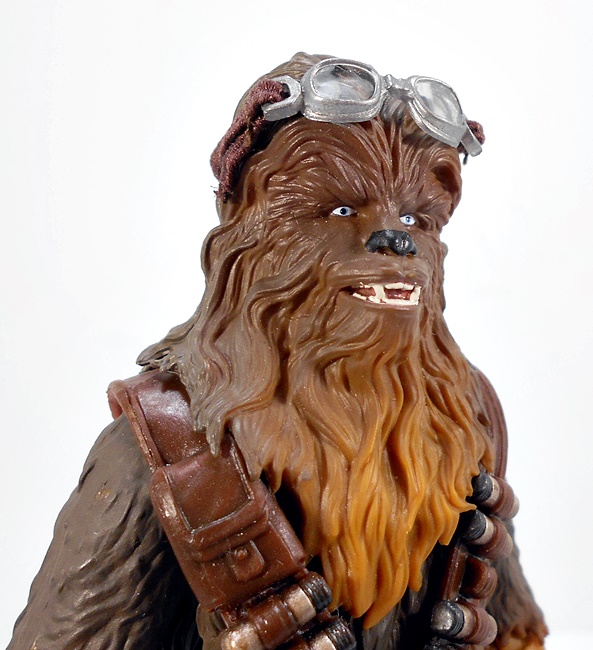 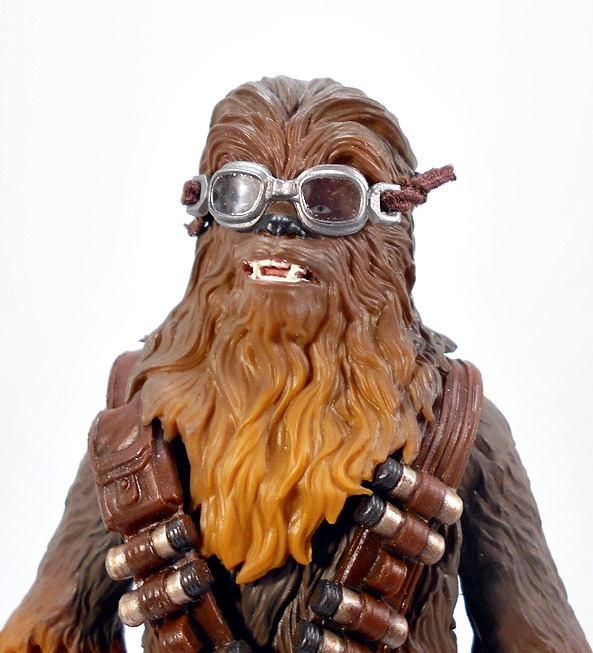 We do get an entirely new head sculpt, which I think is a fairly solid and I dig the goggles, which have an elastic strap and can be worn up on his forehead or down over his eyes. Once again, I’m going to take the lazy way out and not run down the articulation. I’ll just refer you to my review of the original Black Series Chewbacca review from many years ago. 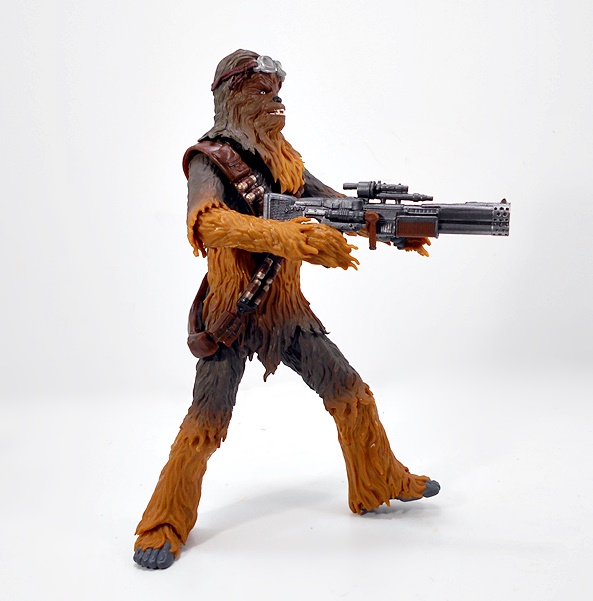 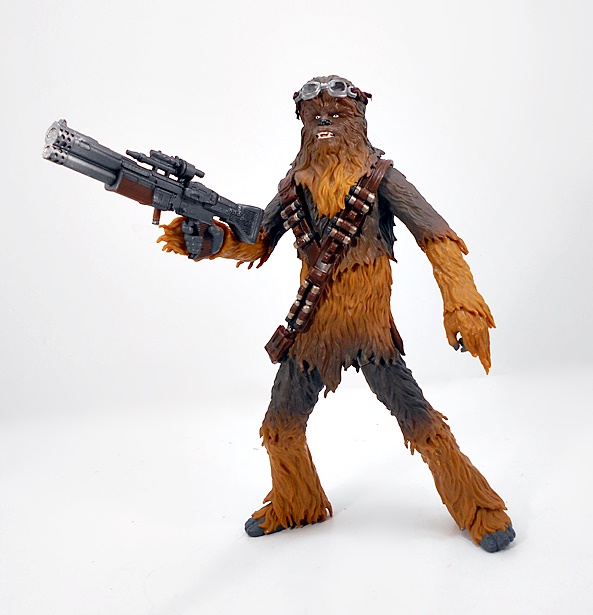 Chewbacca comes with the blaster rifle he wielded in the film. I’m not sure what this one is called, but it’s a formidable weapon for a formidable Wookie. The sculpt features loads of detail, the forearm grip is painted brown, and there’s a small side grip that’s actually articulated and can fold in or out. It’s a great looking gun, I just wish they had re-sculpted Chewie’s left hand so that he could hold it by the forearm. 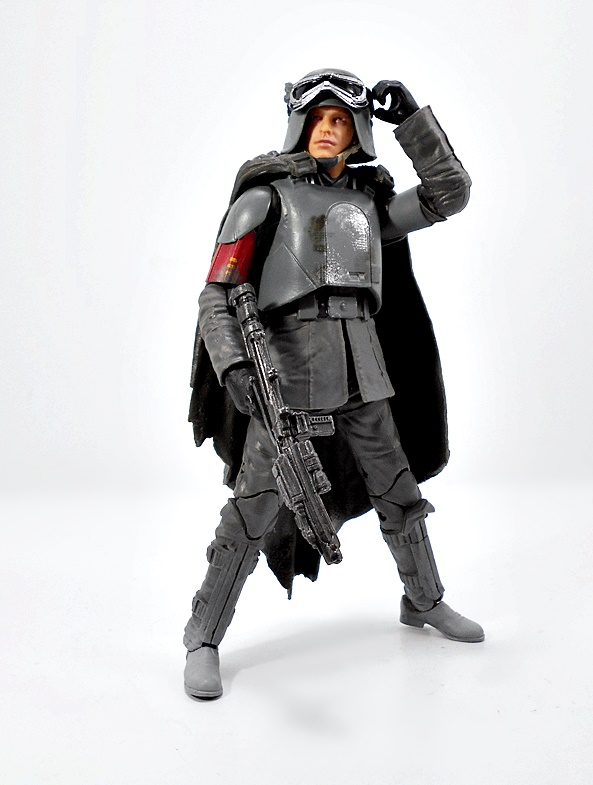 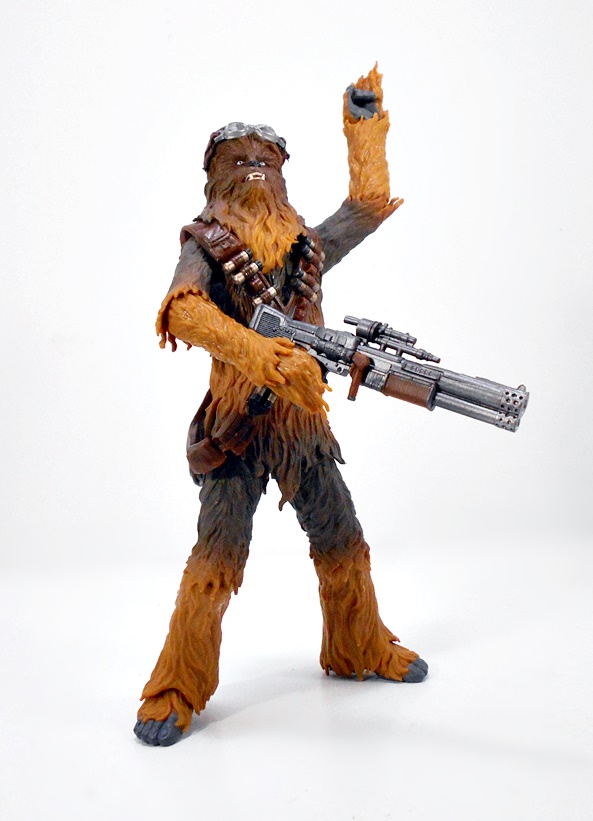 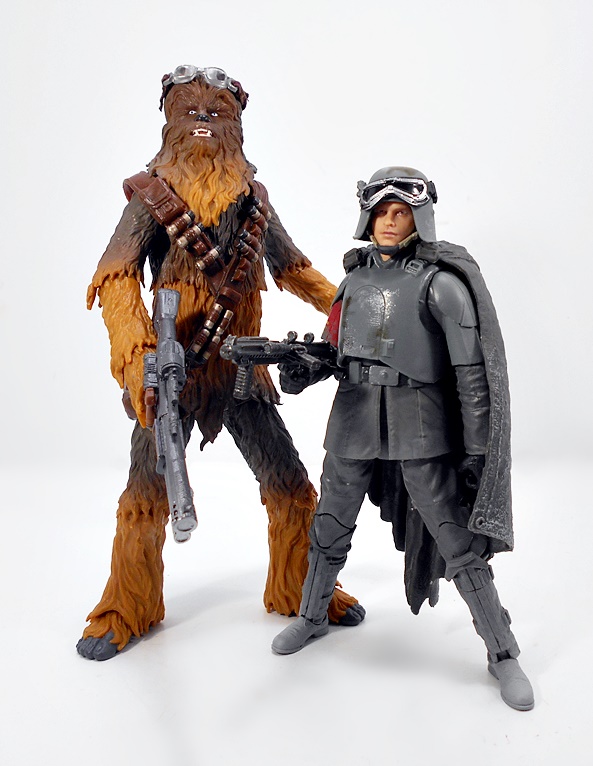 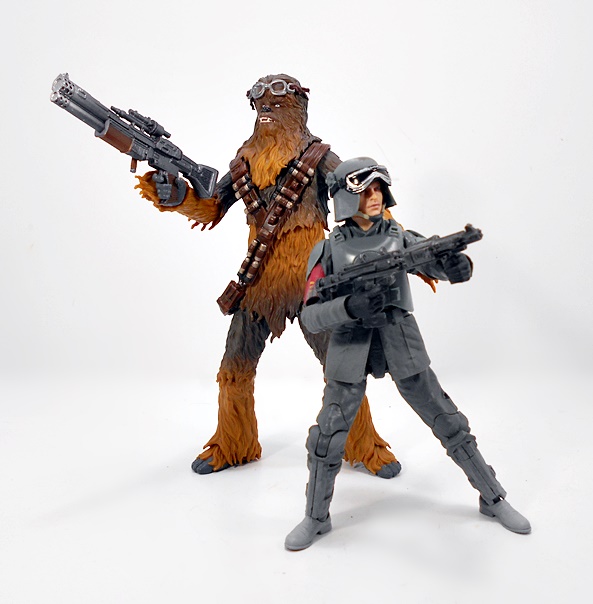 In the end I couldn’t be happier with the way Mimban Han turned out. It’s rare that I can give the Black Series the nod for going above and beyond, but Hasbro did just that on this figure. All the removable gear makes him lots of fun, and he’s just a great looking figure. Chewie isn’t quite as big a success story. There’s a lot of recycling here and the paint just doesn’t do the sculpt any favors. It’s not a terrible figure by any means, and I’m ultimately glad I got him, but I’m also glad I didn’t have to pay full price for him. And I have to say, it’s been fun going back and checking out figures from Solo. So much so that I may try to squeeze a couple more into the mix next week.