Merry Christmas, everyone! For the last bunch of Christmas morning content, I stuck to reviewing bigger items that invoked nostalgic feelings of childhood Christmases when giant playsets or vehicles would be discovered under the tree. This year, I’m coming at it a lot simpler, but with the same amount of feels. Some of my earliest and most memorable Christmas mornings involved Star Wars toys. Indeed, I’d be hard pressed to remember many Christmas mornings that didn’t involve opening some kind of Star Wars figure, toy, book, video game, etc. I remember my parents used to wrap several Star Wars figures together so I couldn’t figure out what they were until I opened them. And that one year I got the AT-AT and Snowspeeder and took them out into the snow to play was pure magic. And it was probably only magic that saved me losing my fingers to frostbite. I also have very fond memories of one Christmas and a certain rubber Yoda puppet that probably stayed on my hand until I went to bed that night. This year, with the final installment of The Skywalker Saga out in theaters, I thought it would be only fitting to turn to a Star Wars toy for my Christmas review. And pardon me if I ramble a bit, but I’ve got quite a few Jamesons in me to get me through this holiday.

I enjoyed Rise of Skywalker quite a bit. Granted, it’s not what I would have envisioned for the end of the saga. It also steps on the events of Return of the Jedi a little too much for my liking. But it was still a fun and enjoyable film. And unlike it’s predecessor I look forward to seeing it again. Today’s toy isn’t actually from Rise of Skywalker, but Kylo Ren and his TIE Silencer have been in all three of the Sequel Trilogy films, and if I remember right I think he actually had two of them in this one, because one of them got crashed and burned up. Either way, I’ve had this one for a couple of years now and it’s long past time I opened this baby up. The ship comes in an enclosed box with just a small window to show off the included figure. It doesn’t actually state the film it’s tied to, but based on the art, it seems to be branded for The Last Jedi. There’s some assembly required, and once it’s done this thing isn’t going back in the box. So let’s rip it open and see what we got! 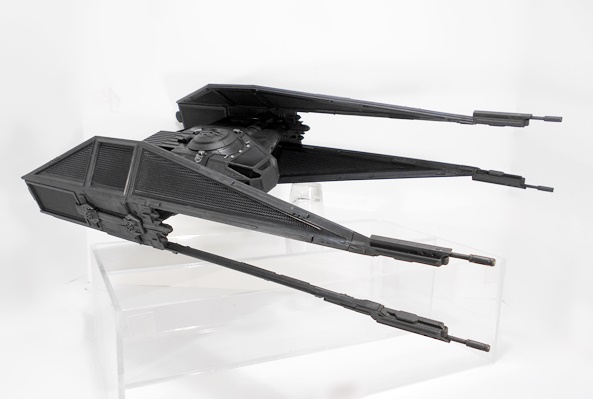 Straightaway, I have to say how much I love this design. It consists of a strong nod to the old school TIE Interceptor, but with plenty of new stuff to make it fresh and original. The squat profile places it at odds with the usual verticality of the regular TIE Fighter design, giving it a sleek profile, which is probably a tactical advantage as well. It also makes it perfect for spinning, which made for a particularly great looking attack run in The Last Jedi when he made his approach toward General Leia’s Command Ship. The wing panels have the same textured design as regular TIEs and features extended guns at the tip of each of the wings to give it a rather aggressive look. And while on the subject of the wings, I have to say that the build on this ship is much better than some of Hasbro’s recent efforts. The plastic used for the wings is flexible, but the panels were not all warped right out of the box, and it doesn’t look like that will be a problem. What’s more, the guns on the tips are attached as part of the build, and that probably spared them from getting all warped and messed up in the box.

The body on this thing is larger than your average TIE Fighter, reminding me a bit of Darth Vader’s Advanced TIE. There’s a ton of great detail in the sculpt, including panel lines and vents, and a bunch of other bits and bobs that I would probably need the Visual Dictionary to identify. The bulk of the toy is cast in black plastic, but there is a fair amount of dark and light gray to bring out the detail. You can probably also make out the little blue paint app on the bottom, that’s the Force Link gimmick, which is used to activate the toy’s electronics. It claims to have lights and sound, but because I never bothered picking up the Force Link, those functions of the toy aren’t accessible to me. Yeah, that rally sucks, but to be fair the toy stands just fine on its own without the bells and whistles. 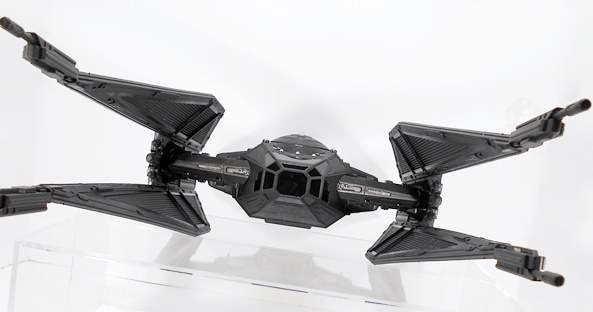 One of the biggest departures from traditional TIE design is the lack of the circular segmented cockpit window that’s been such an iconic part of TIE design since the beginning. Yeah, it’s kind of there, but not really. Instead, the front of the pilot cabin looks more like a traditional cockpit. It definitely makes this ship look distinctive and sets it apart from the older ships a lot more than the new X-Wing designs. At least in my opinion. Either way, this thing looks pretty vicious when viewed from the front. 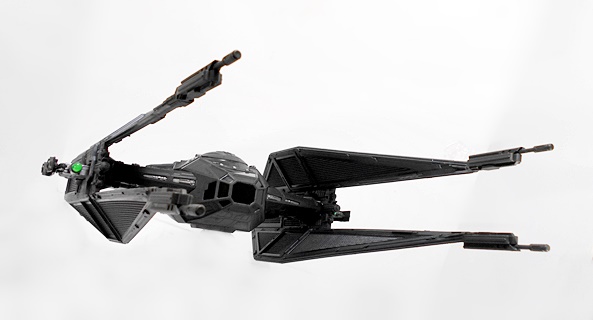 While this ship happily escaped the grafting of Nerf darts onto it, the TIE Silencer does feature a weapon gimmick (Force Link not required), and that’s the pop out torpedo launchers on the sides. These are activated with a button on the back of the ship, which causes the spring-loaded weapon pods to deploy in an instant, and I really dig it a lot. The torpedoes are neon green colored missiles that are extremely bright and do a pretty good job of mimicking some kind of energy weapon. These can be retracted simply by pressing them in. 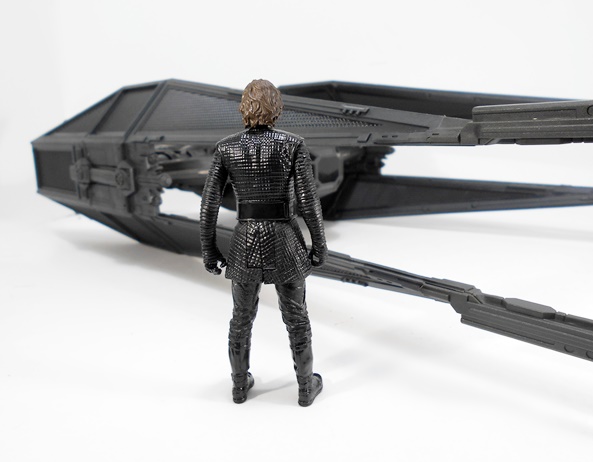 And as advertised, the ship comes with a Kylo Ren (TIE Pilot) action figure, which as near as I can tell is the same as the regular 5-POA Kylo Ren from The Last Jedi. He doesn’t come with a helmet, but the head sculpt is pretty good and even includes the scar. I’m on record as actually liking these 5-POA figures quite a bit. They scratch a certain nostalgic itch and the sculpts are actually quite good on most of them. Here you get a lot of nice texturing from Kylo’s suit and details in his wide belt. He also comes with his now iconic lightsaber.

As expected, the figure does fit inside the vehicle. The hatch on top opens to reveal a very detailed cockpit, complete with texturing on the seat and the deck plates, and even all the control panels are fully fleshed out in the sculpt. And unlike some of Hasbro’s recent vehicles, the figure fits in there quite comfortably and with plenty of room to spare. 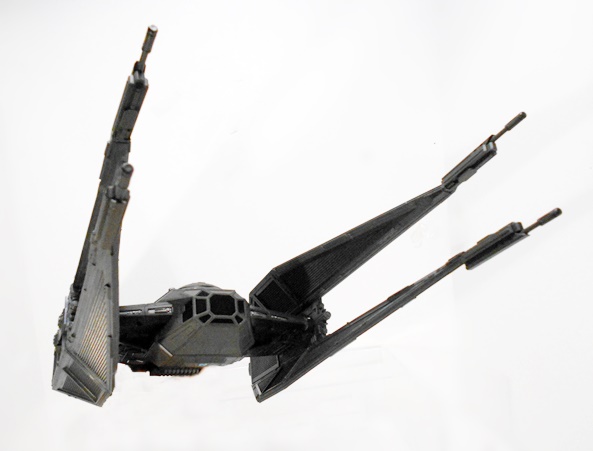 I can’t deny that a lot of Hasbro’s 3 3/4-inch scale vehicles and ships have been really hit-or-miss lately. The first release of Poe’s X-Wing was a travesty (thankfully remedied by a new Vintage Collection release) and even the First Order TIE Fighter was plagued with wing panels that were warped right out of the box. I actually returned one of those, and I almost never do that! So, taking all that into account, I’m quite pleased with how this ship turned out. The build quality is excellent, the detail in the sculpt is remarkable, and the weapon gimmick adds to the toy without defacing it. I suppose the only real complaint I have is that the electronics require the Force Link to work, but then I’ve never really cared much for electronics in toys anyway. I guess, there’s one more sticking point with this toy, and that’s the original price tag. I seem to recall this thing retailing at around $59.99, and there is no way in hell it’s worth anywhere near that. I picked up mine on clearance a while ago for $25, and I thought that was a pretty fair price. And with my Star Wars vehicle purchases few and far between these days, I have to say opening this wonderful ship on Christmas Eve brought back a little bit of that magic for me.

And with that, I’ll wish you all a Merry Christmas and I’ll catch you again at the end of the week.