My Toy Closet has become something like an archaeological dig these days. So much so that I’ve really pulled way back on what I’m buying and trying to take the time to unearth the unopened treasures that lie under the levels of cardboard strata. This past weekend I unearthed a particularly interesting box of NECA goodies, a lot of which center around Capcom’s 1994 beat-em-up classic, Aliens Vs. Predator. In an effort to clear out this box, I’m going to try to check some of this stuff out each week until I get to the end. There are eight figures in the series total and today I’m starting with two of the three Aliens released from the game.

And here’s Arachnoid and Razor Claws in their boxes. You’ll notice that Chrysalis Alien is unaccounted for and that’s because I haven’t been able to find him at Target, or online for a decent price. I may wind up over-paying for him at some point, but for now let’s just have a look at this gruesome duo. They come in collector-friendly window boxes, which I dig a lot more than the sealed clamshells. I’m going to start with Arachnid! 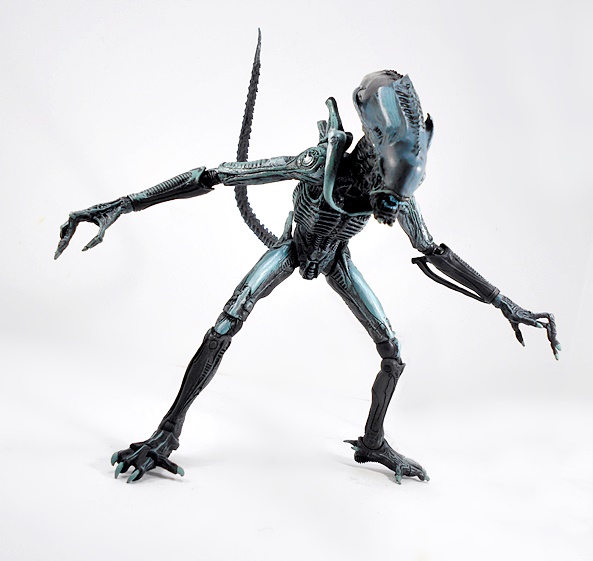 So, this guy reminds me a lot of the Xeno Warrior from Aliens, but with enough key differences to set him apart. I believe it’s a new sculpt, but I don’t own all the NECA Xenos, so I won’t stake my (admittedly next to worthless) reputation on that. As with all of NECA’s Aliens, there is some absolutely amazing detail work in this sculpt, which really brings out the Giger flavor in the design. Why he’s called an Arachnoid, I don’t know because there really aren’t any arachnid influences that I can see. He does have fairly typical arms and legs, the usual exposed rib-cage, and a pretty basic segmented tail. This fellow only has four of the stalks protruding from his back and he has bone-like loops hanging off his forearms. The coloring features a very pale blue with a black wash to pick out all that lovely detail. 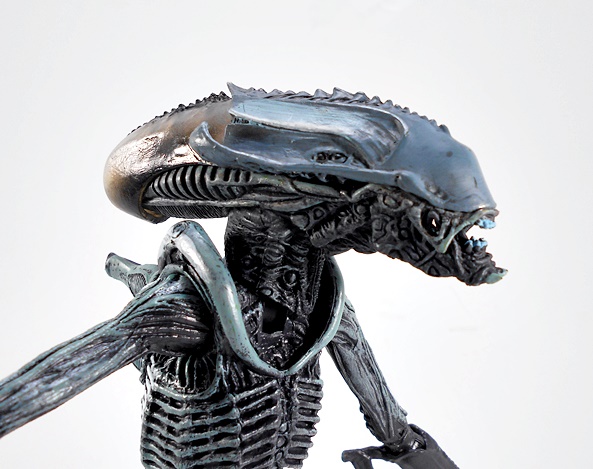 The head sculpt features the usual elongated head. The cranium is overall pretty smooth, but it does feature a spiked ridge running down the center. The front half is blue, while the back half is decidedly cockroach colored. The mandibles are the usual mess of sinew webbing and the jaw opens to reveal the secondary mouth, which can extend out past the jaws.

I dig this guy a lot, but if you’re looking for something vastly different than the regular Xeno’s I don’t know if this one will scratch your itch. He’s definitely got a lot of unique stuff going on, but I really had to compare him to my Alien and Aliens Xenos to pick out all the differences. Still, I’m sure the die-hard fans out there will spot the differences a lot easier than me. The coloring adds to his distinctive look, and helps makes him stand out as a video game character. With all that having been said, he takes second place in this pair to my favorite… 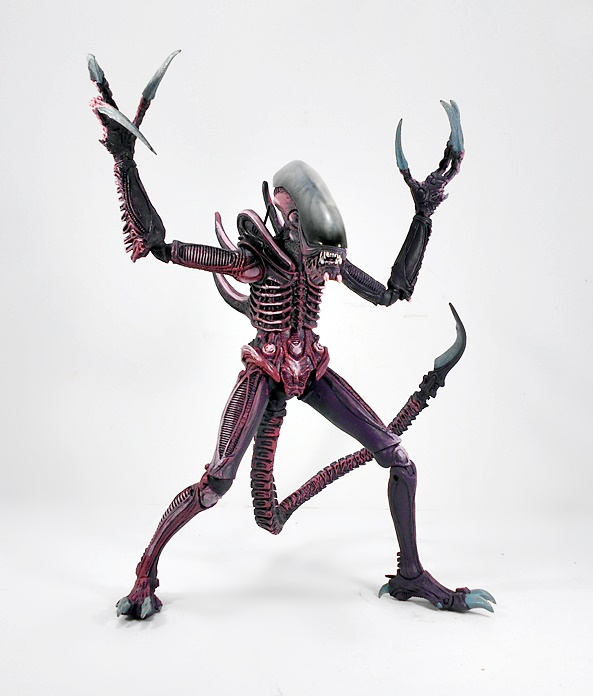 Razor Claws is just so damn awesome on every level.  He features a completely different body sculpt, with a lot more sharp detail, particularly in the legs. The structure of the torso still shows off the rib-cage, but with an entirely unique structure. Of course, the biggest differences here are found int he giant razor clawed hands and the tail, which possesses a cycle-like blade at the end. This fellow still only has four tubes coming off his back, but these are longer and taper to points at the ends. He’s also missing those extra toes that the Arachnoid has, and he has pretty powerful looking talons jutting out from the front of his feet. The coloring here is also gorgeous. He has a reddish and almost pink finish and just like his comrade, the black wash brings out all the exquisite detail in the sculpt. 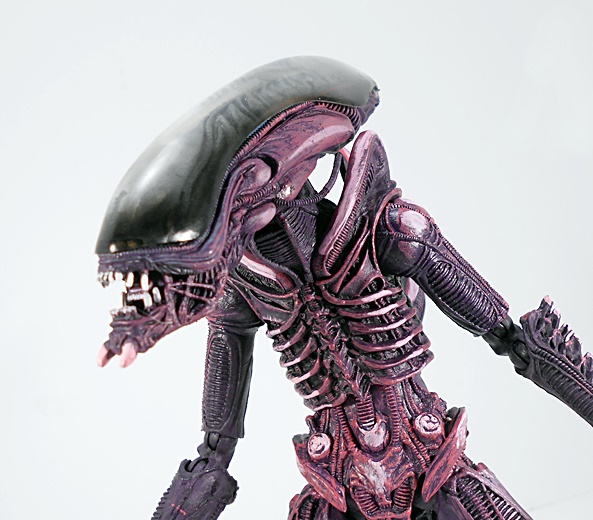 The head is also completely different, with a totally smooth cranium, tusk like horns protruding from his chin, and the same articulated jaw with the secondary mouth that extends outward. The cranial plate is somewhat translucent so you can just make out some of the detail that’s going on underneath it. Overall, it’s a simpler styled head than the Arachnoid, but my personal taste makes it my favorite of the two. 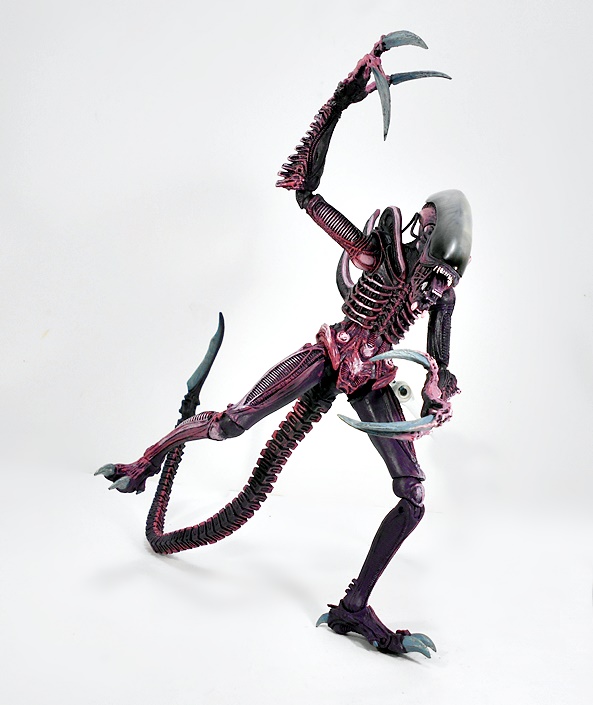 And I can say that pretty much about the entire figure. Not only does this Xeno look a lot more distinctive than his Arachnoid brother, but he also looks like an absolute killing machine. Between those shredding claws and that extra blade on his tail, this fellow looks like he’s just designed to leap on Colonial Marines and eviscerate them in a matter of seconds. Plus, there’s just something about the coloring that really does it for me. 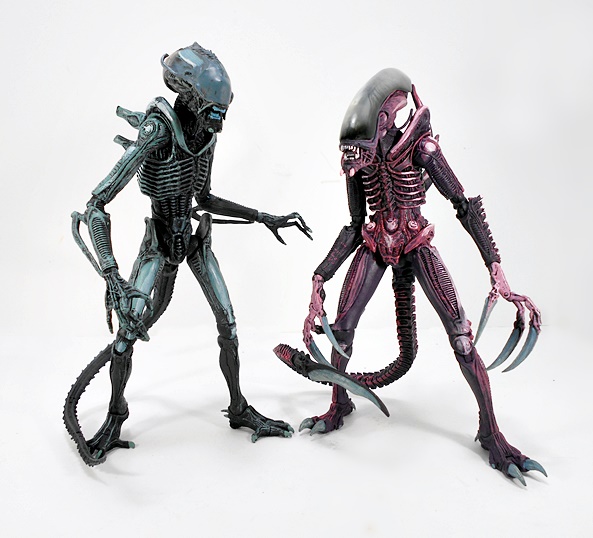 I’m always looking to add some new Xenomorphs to my collection, so even if I wasn’t a fan of the quarter-munching arcade game, I would have still been all over these. But the fact that they are realistic interpretations of the 16-bit pixelated game characters makes them all the more sweeter. And even if you aren’t looking to collect all the Arcade figures, I think these fellas would be right at home in any NECA Aliens collection. They look fantastic together, and I just know I’m going to wind up dropping a lot of money to pick up the last one and complete the set. Next week, I hope to be back to check out the Predators in this line!