One of the many lessons I took away from Toy Fair is, OMG there are so many cool new Transformers coming and I’m woefully behind in reviewing the ones that I have. So, with Earthrise figures already hitting the shelves, and some sitting in my online Pile of Loot, I thought I’d dig in and open some of the Siege figures I’m sitting on. And it’s not like I haven’t given up on trying to be current with my content years ago, riiiiight? Oh, look… it’s Shockwave. Let’s check him out.

After what seemed like an eternity of boring packages inspired by the Bay movies, Siege upped the ante with some amazing artwork. I love the gritty and realistic renderings of these bots, and the art design matches the look they were going for with the figures. I’m crowing a lot about the artwork because, to be honest, this package isn’t showing Shockwave at his best, and I was almost tempted to leave him on the shelf when I first found him. Anyway, he’s a Leader Class, but that can be a little deceptive since a lot of his parts are optional for his robot mode, and in my case, I prefer to leave them out. But I guess I’m getting ahead of myself… let’s start with his alt mode. 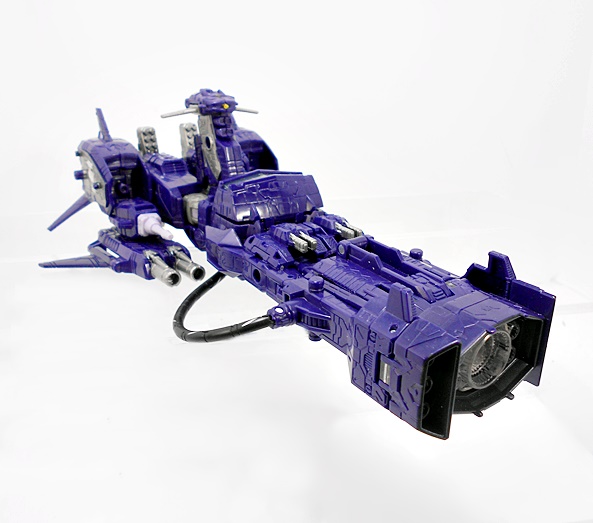 I don’t really understand Hasbro’s unwillingness to do a proper alien laser gun alt mode for Shockwave. I mean, they sell Nerf guns and some of those resemble real guns a lot more than Shockwave ever did. And yes, there’s a workaround to reach a fan-mode that resembles a gun, but it’s not something I’m going to touch on here. In any case, what do you do with a Transformer who’s alt mode used to be a camera, or a tape deck, or a laser gun? You turn them into a spaceship. And so, Siege presents Shockwave as Decepticon Space Cruiser, and as sarcastic as I’ve just been on the subject, I’m actually pretty keen on this design. I’d like to imagine that there’s a lot of mass shifting involved here, because the design looks like it should be massive. Hell, this would be a great stand in for the Decepticon Flagship, Nemesis as far as I’m concerned. Although that would have to be a hell of a lot of mass shifting!

As with many of Siege’s figures, the sculpting is complex and very busy. The hull surface is littered with panel lines and there is hardly a millimeter of this craft that isn’t packed with some kind of detail. It’s also blistering with guns. There are two small turrets on top and three banks of cannons slung below each of the engine pylons near the back. I dig how powerful the engines look, again suggesting that this thing is supposed to be BIG and all the wings and fins coming off the back adds to its stylish complexity. And then there’s the giant emitter on the front, which I suppose could be some kind of Deflector Dish, like on the ships in Star Trek, or it could just be a super weapon. In the end, I guess it’s whatever I want it to be.

There are a lot of clever fake-outs on the ship design as well, making it seem like certain parts are components of Shockwave’s robot mode, when in fact these parts are removed for transformation. The engine pylons, for example, look a lot like Shockwave’s lower legs and the conning tower looks like it’s meant to be Shockwave’s head. Meanwhile, both of the side cannons resemble Shockwave’s gun arm. As I mentioned above, there’s a fair amount of parts-forming here and I realize a lot of fans don’t dig that, but when considering the toy as a whole, I’m OK with it. So let’s transform Shockwave and start with his most basic robot mode. 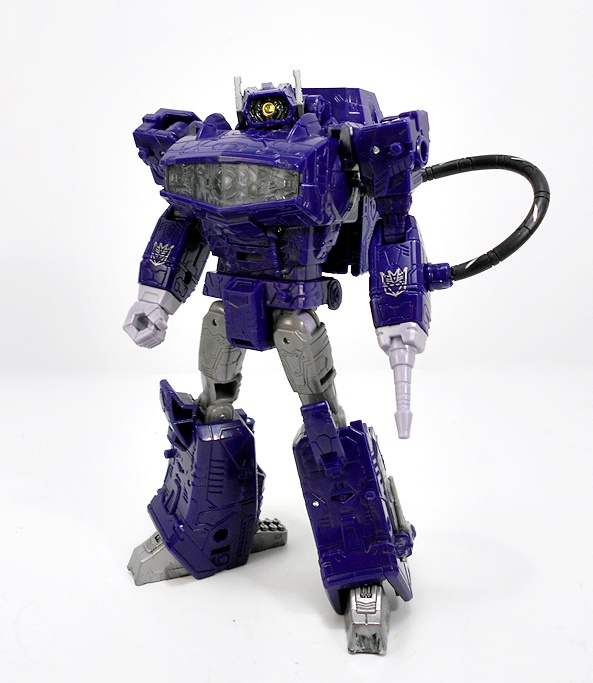 Stripped of his bulk, Shockwave transforms into a roughly Voyager Class figure, which happily puts him in perfect scale with Siege Soundwave and Megatron. Oh, and he also happens to be absolutely spectacular! The character has had a select number of figures in recent years from the forgettable Combiner Wars release to the weird Walgreens Exclusive that I still have to review one of these days, but this one scratches all of my itches. And yet all it does is take the original character design and do it right. The familiar translucent plastic bar is present on his chest, he still has the backpack where the electronics were stored in the original figure, and you get the necessary cable running from his right gun arm to the backpack. And all of that wonderful panel lining from the Space Cruiser mode carries over to make for a hyper-detailed robot. The deep purple deco from the alt mode also dominates the robot mode with some additional gray and silver. I just love this bot in every way imaginable. Except maybe in the literal sense of having intercourse with it. 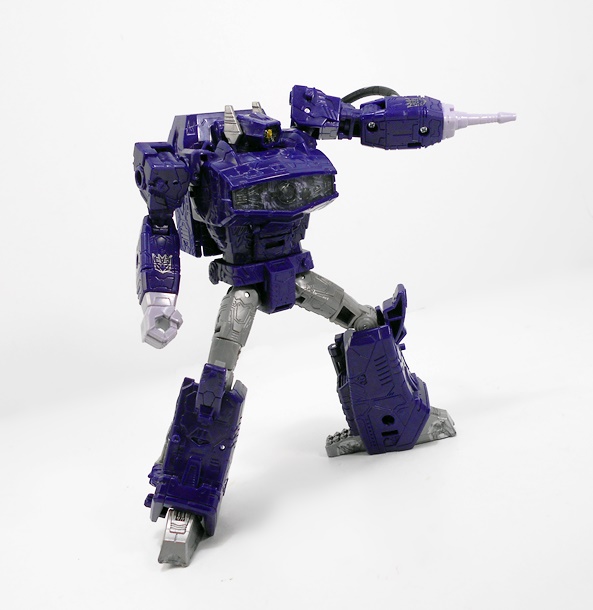 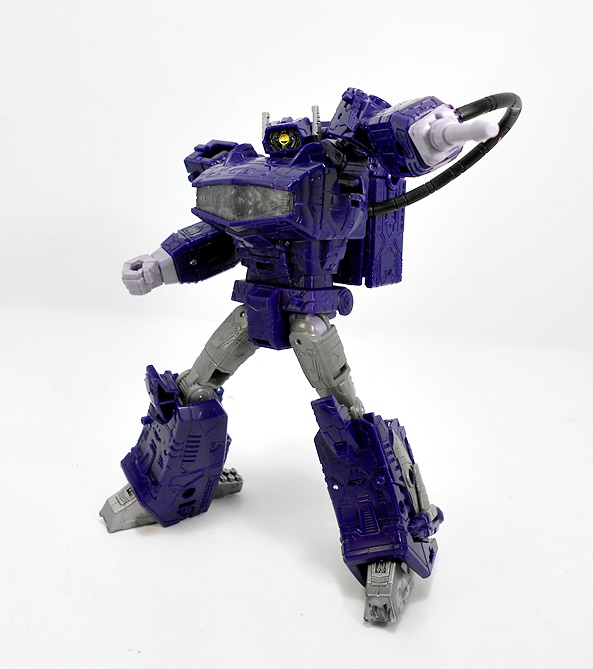 And let’s just take a moment to appreciate the head sculpt with that single piercing yellow eye that sports some outrageously fine light piping. Seriously, just about anywhere I rest this figure, that light seems to be illuminated  They packed some amazing sculpting into the area surrounding that eye, and he has his traditional flat ear-antenna. Simply wonderful! Now… about all those extra parts… 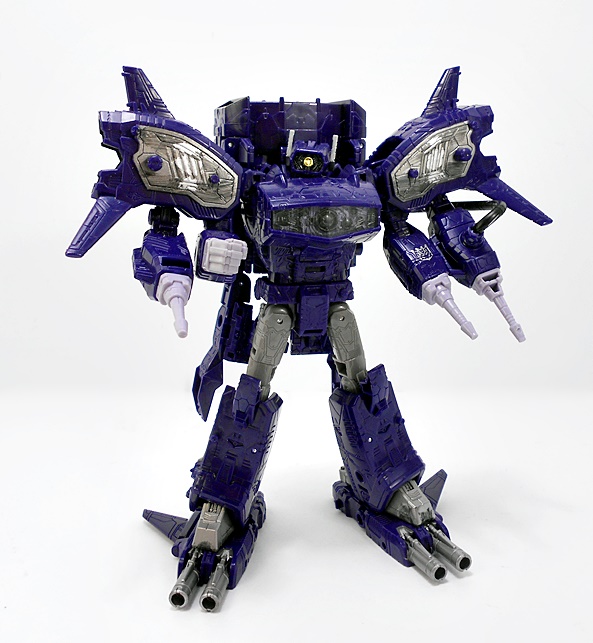 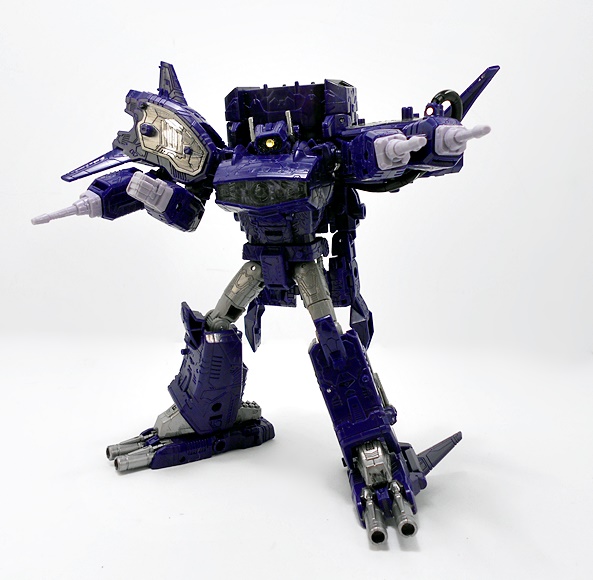 Throwing back on all of those parts, we get Shockwave in his powered up mode and for me this is a big fat NOPE. The bulk of the parts go onto his upper body with a bigger backpack, bigger shoulders and a really weird extra set of arms that end in guns. It looks like some kind of Transformers body horror to me, like he went through the Space Bridge with another Transformer and this is what got merged together and came out the other end. Also, he acquires a pair of gun shoes. GUN SHOES!!! No sir, Hasbro. Only Predaking can pull off gun shoes. Don’t get me wrong, I’ll bet this mode is all kinds of fun for the kids and that’s great, but I won’t be displaying him like this. What else ya got, Hasbro?

Well, how about this jet sled kind of thing? This is also not really doing much for me. He looks silly on it and it doesn’t hold together well at all. I guess as a separate attack drone, maybe? But all in all, I’m happy just putting these parts aside when I display Shockwave in robot mode. 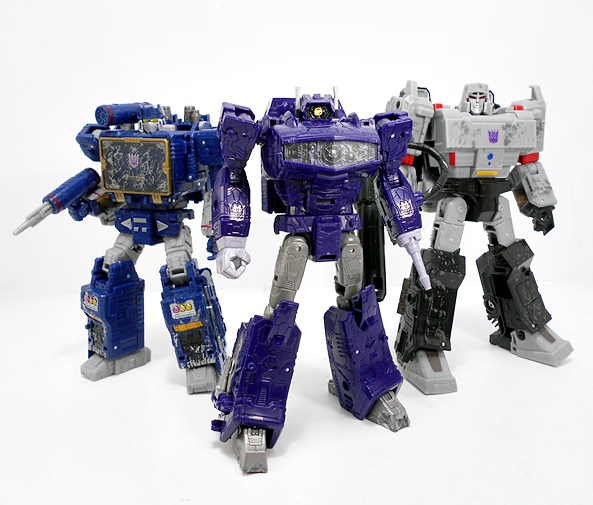 I’m glad to be going back and hitting some reviews of the older Transformers from Siege before getting into Earthrise, because clearly there are some great figures here and I don’t want to miss out on gushing about them. Shockwave here will likely raise issues with some. He’s undoubtedly got elements of being a parts-former, but with both an alt-mode and robot mode that are as great as these, I’m perfectly OK with it. And to their credit, Hasbro tried to use those extra bits to good effect, but I’m still happy to put them in a pile behind him on the shelf so they’re on hand when I want to transform him, but otherwise out of sight and out of mind. And damn the Siege versions of the Holy Decepticon Trinity of Megatron, Soundwave and Shockwave sure look amazing together. Hopefully I’ll get some time to dig into Siege again next week to make up for lost time.