If anyone was expecting me to do a Star Wars review on May the 4th, well then you shouldn’t underestimate the power of Marvel Monday. Bump Marvel Legends? In its moment of triumph? I think you overestimate my backlog! That was just never going to happen. I was actually trying to push for getting today’s review out on Wednesday, but this has been one those hell weeks at work, so it turned out to be a two-review kind of week. Plus, and to be quite honest, it’s been so hard for me to summon up a lot of enthusiasm for Star Wars these days. I’m not throwing in the towel, I’m still buying some of the toys, but after The Last Jedi and Rise of Skywalker I think I need to give it some time to replenish my batteries. I think that’s best illustrated in the lack of Star Wars content lately, and the giant stack of unopened Black Series figures in the Toy Closet. Maybe I need to get to work on some Star Wars Hot Toys reviews to get my excitement up again. Either way, the Black Series Deluxe Probe Droid wound up on my doorstep this week and I decided I would push it to the head of the line. 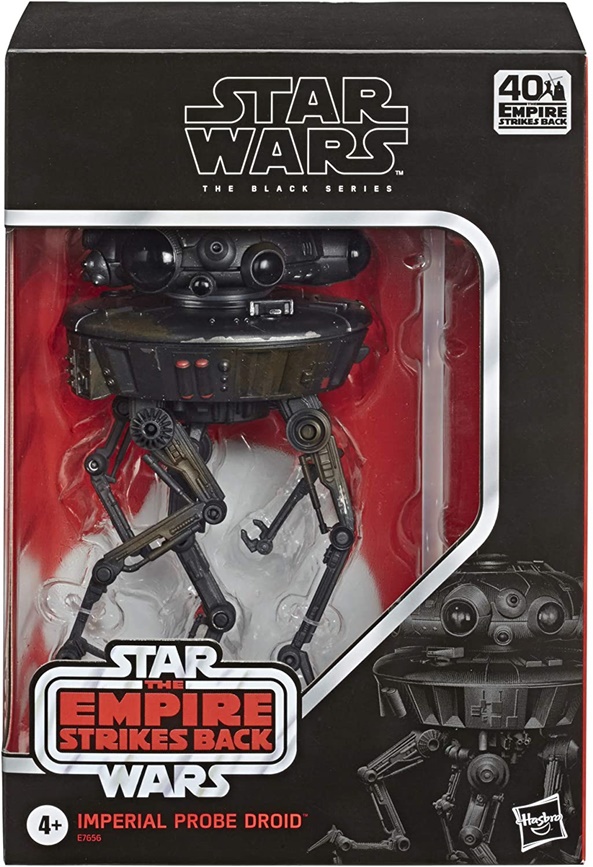 This is indeed one of the line’s Deluxe offerings, which means it comes in a bigger box and retails for around thirty bucks. Hasbro is tying this release into their 40th Anniversary of The Empire Strikes Back, and I have to say I love the addition of the old school logo on the box. Otherwise, the packaging gives you a good look at the figure and it is collector friendly. And that’s good, because I may actually keep this box. In addition to the figure, you get a stand which consists of a Hoth-style base and a clear plastic rod. 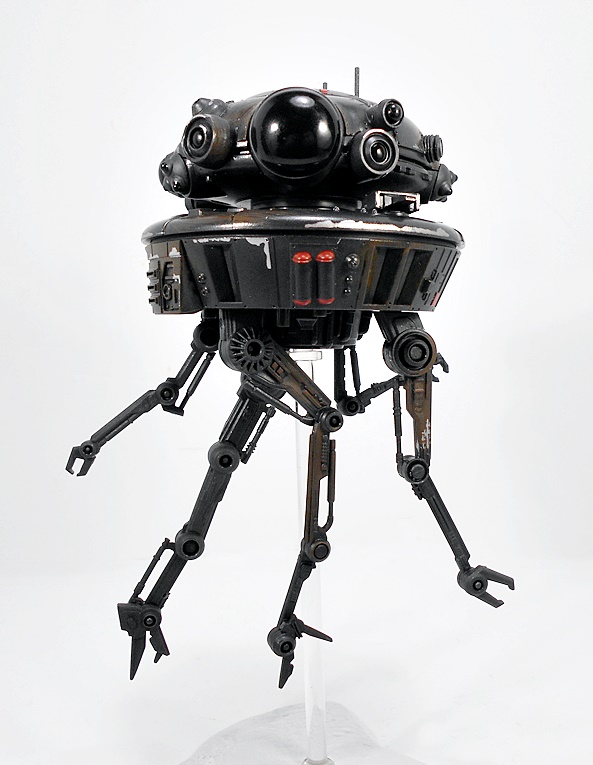 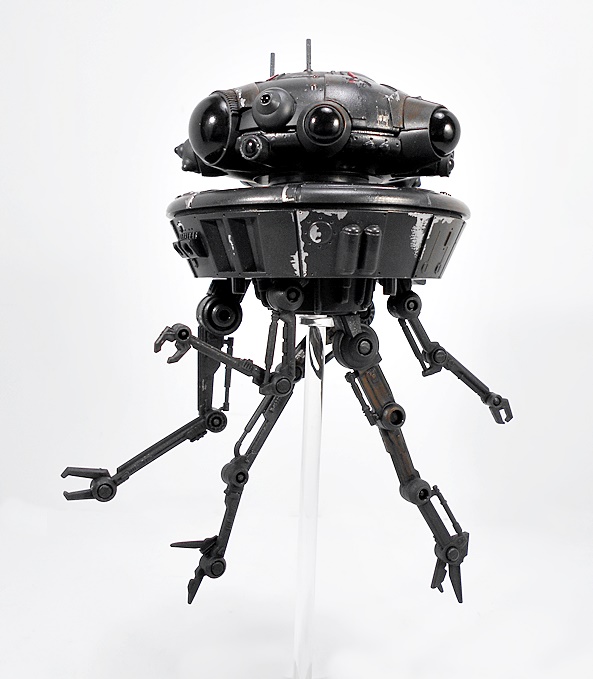 Free of his packaging and on the prowl, the Probe Droid looks quite spectacular! It’s crazy to think how iconic this droid has become considering what a tiny part he played in the film. He flew around on Hoth a bit, he fired off some shots at our heroes, and then he got toasted. He wasn’t very consequential and yet he’s become something of a droid star. It’s hard for me to come up with something equivalent in the new films, but I guess we’d have to wait a few decades to see whether any of the new designs take root and enjoy this kind of a legacy. And when I say we, I mean y’all because I don’t know that I have a few decades left in me. Nonetheless, over the decades I’ve had at least a couple of figures of this droid, most notably the original Kenner release that came in the Turret and Probot playset and the Power of the Force 2 version. Both were great figures. I can remember playing with the Kenner version long after the family dog had chewed it’s arms down to misshapen nubs. I used to just pretend he got mauled by the Wampa and barely escaped with his central processor intact. 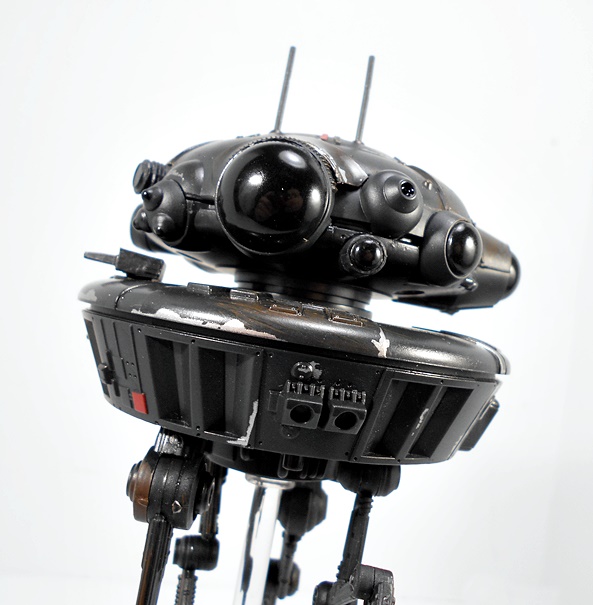 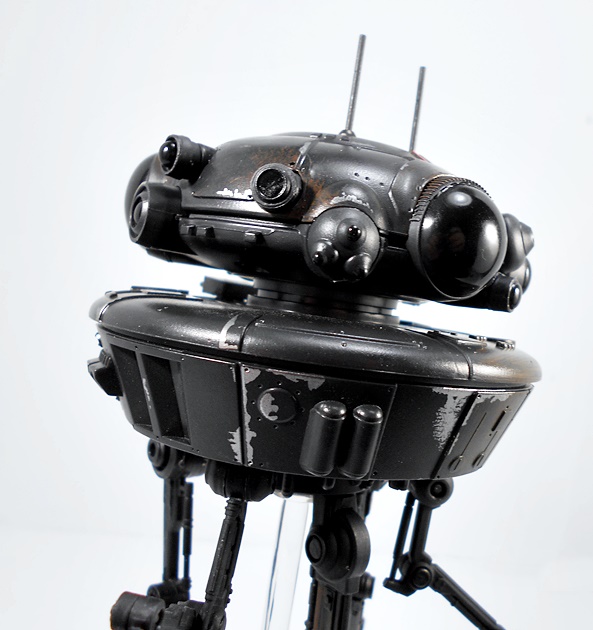 I think it’s safe to say that Hasbro outdid themselves with this sculpt. There are plenty of panel lines, compartments, tanks, and little bits and bobs incorporated into the droid’s body. Look closely and you can see tiny sculpted rivets and pock marks, which suggest that these guys are collected by their Imperial masters, or they return to base on their own after their hunt so they could be re-used over and over again. I especially love all the spider-like eyes that litter it’s head. These shiny black soul-less orbs come in all shapes and sizes and are obviously designed to gather all sorts of information in a 360-degree spread as the droid makes its way across its hunting grounds. Between the head and body there’s a boxy blaster, which can swivel left and right to target interlopers. The dual antenna on the head can also raise and lower, although they don’t retract as far as they did in the film. 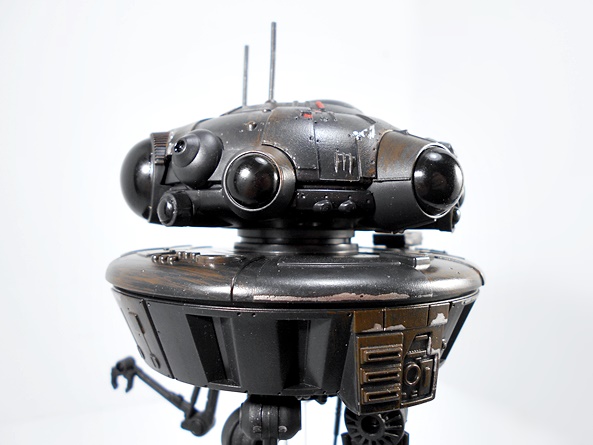 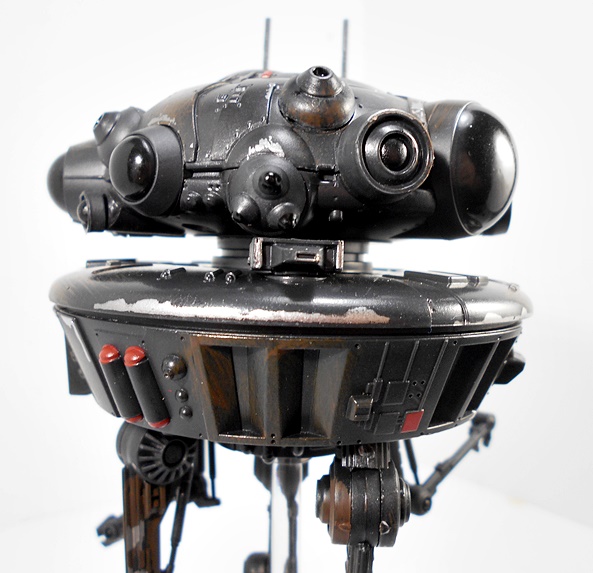 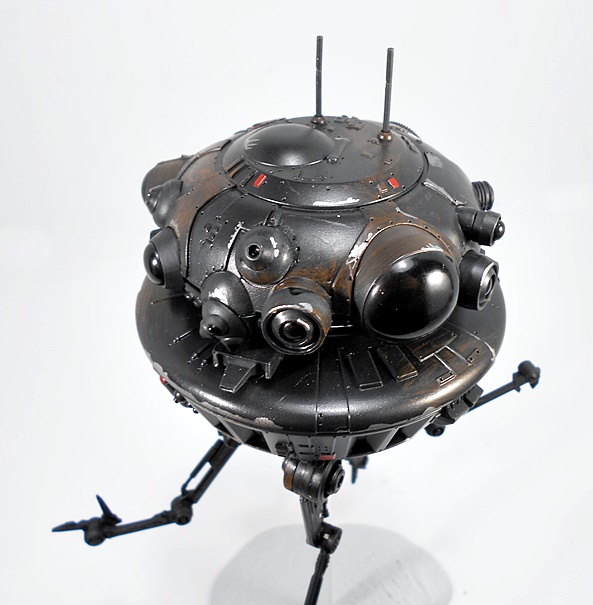 I wasn’t expecting a lot in terms of paint on this fellow. The droid is mostly just a gun-metal gray achieved through the color of the plastic. Still, Hasbro surprised me with some nice flourishes of paint. Most notably there’s a copious amount of silver dry brushing to give the droid a weathered look. Scuffs are scattered about the body and head and I feel it’s not overdone. There’s also some red paint here and there to pick out some of the panels and tubes on the body. Finally, there’s a fair amount of brown, which looks like it could be a combination of rust and dirty oil smeared in patches here and there. I think Hasbro could have gotten away with a much flatter deco on this toy, but they stepped up and did some fine work. It has a real used look to it. 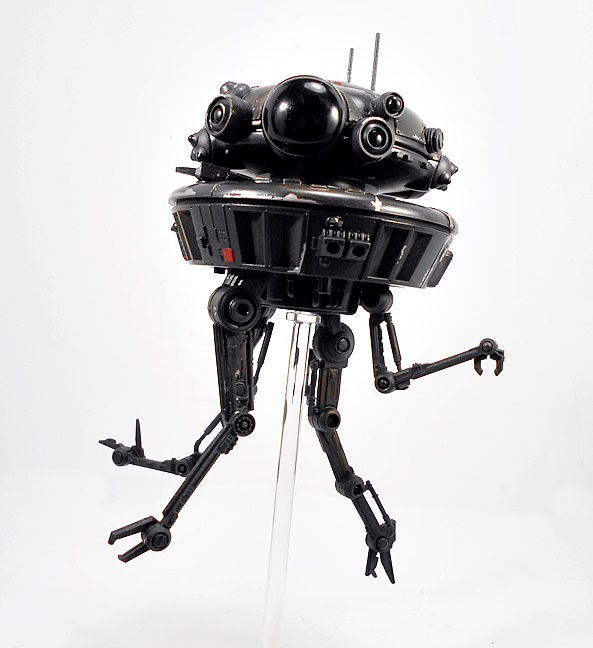 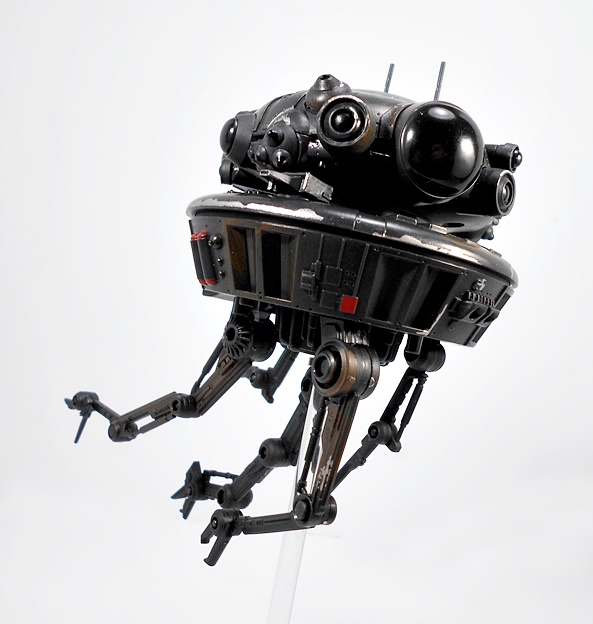 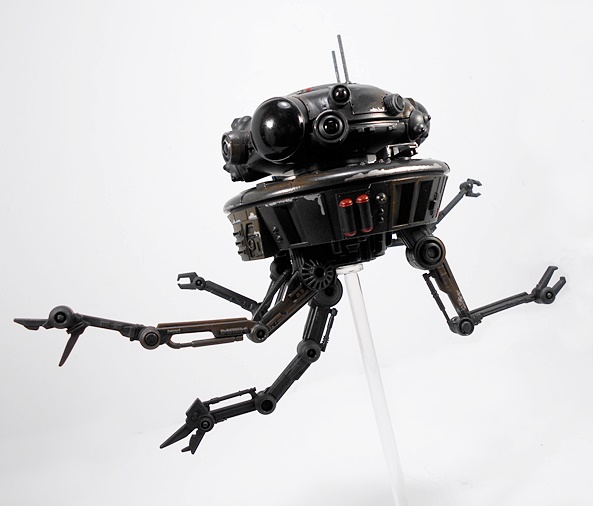 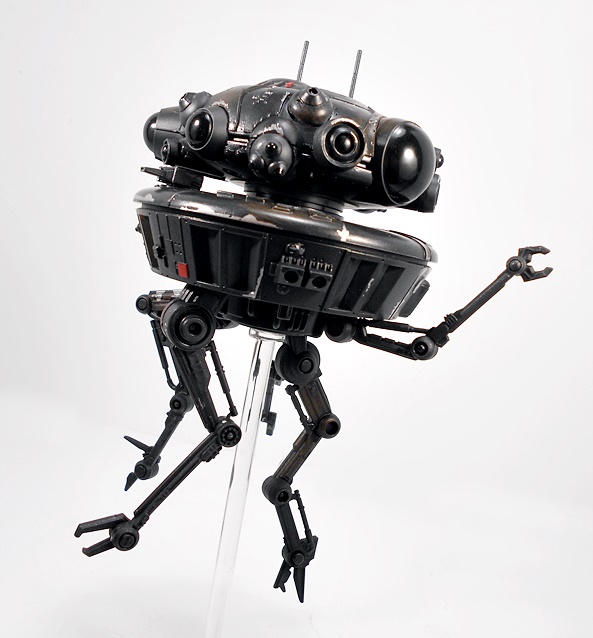 In addition to the rotating head, the five mismatched legs feature quite a bit of articulation. Each leg can rotate where it connects to the body and some have as many as five hinges to them. These hinges are pretty sturdy and keep the legs in place no matter what configuration I put them in. The sculpts are good with sculpted hydraulics and an array of different types of claws and utensils, probably designed to take samplings of minerals, pick through ship wreckage, or whatever the droid happens to be investigating. The full articulation in the legs allow for a seemingly endless variety of display options for posing. I particularly like how they can be swept back as if he’s traveling quickly. 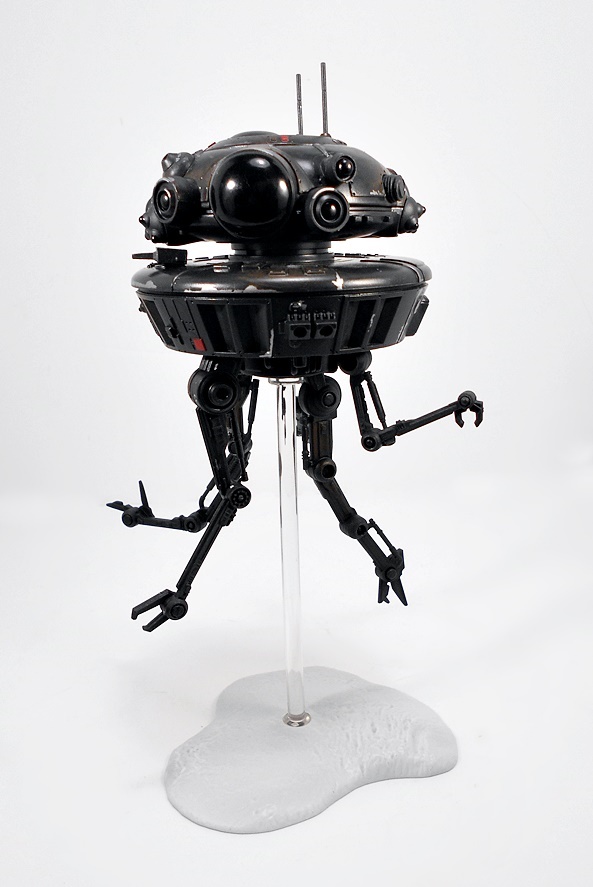 The figure stand is both simple and elegant. It’s just a clear rod and a base, but it works perfectly. I certainly don’t need anything more complicated than that. Although if I am going to gripe a bit. I think for the $30 price tag, Hasbro should have put a sound chip in this guy. The probe transmissions are so iconic and sound so cool, it’s a shame they couldn’t have made that work. I mean, I’ve had novelty key chains with sound effects that cost me next to nothing. 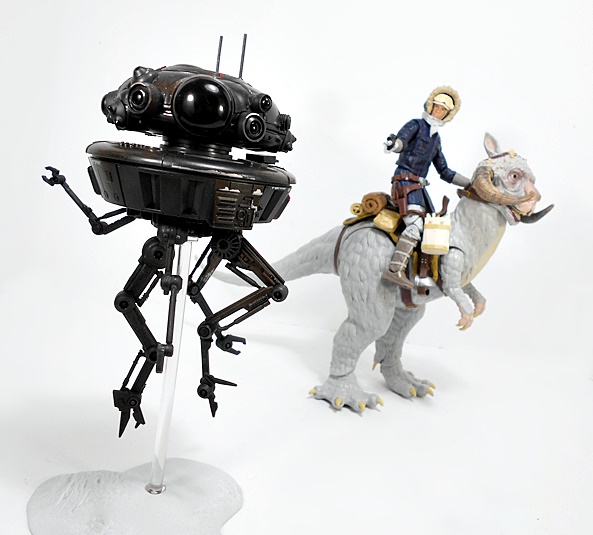 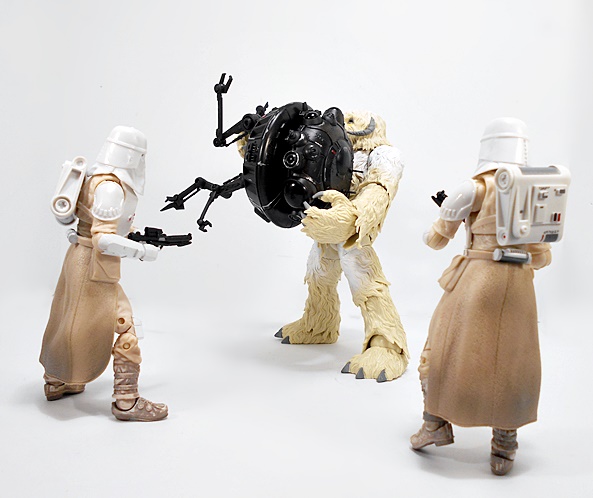 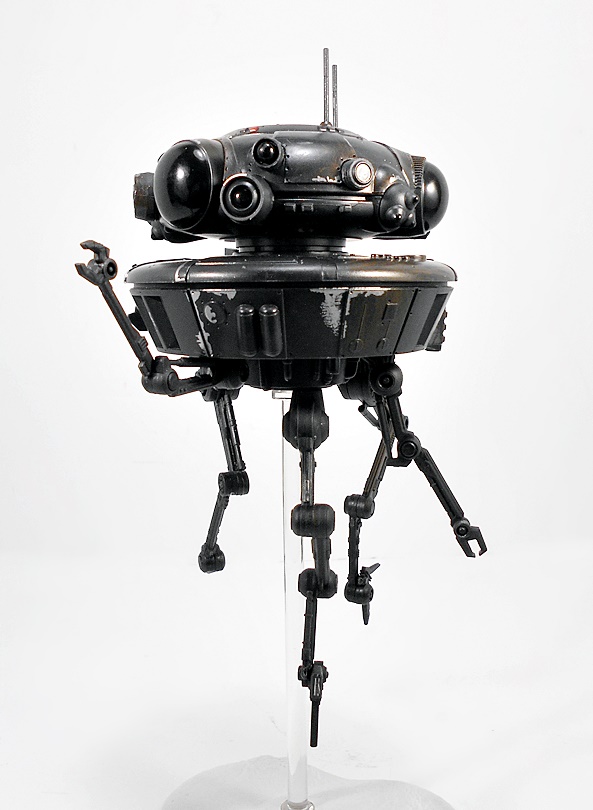 It’s funny. I began this review lamenting my bad case of Star Wars fatigue, but clearly it can’t be all that bad if I can drone on with affection over a Probe Droid that had about five minutes of screen time. But then this fellow is just another great example of how some of those robot and ship designs captured my imagination as a child. Not to mention why I’m still spending money on this shit when I’m pushing fifty. Either way, I think Hasbro did a fine job with this one and I’ll happily put him on the Hoth corner of my Black Series shelves. He looks great, he’s got a lot of articulation, and he’s just loads of fun to play with. I was actually going to wait on this one for a sale, and I did manage to grab it at a bit of a discount, but ultimately I’m pleased I didn’t wait.