I can hardly afford it because of my backlog, but I decided it was time to start mixing up Marvel Mondays with something other than Marvel Legends, and today I’m venturing into uncharted territory. Much like that illicit underground third-party Not-Transformers market (which is so underground you can buy them on just about any reputable online toy retailer) the Sixth-Scale action figure market also has its own copyright-bending thing going on. These rebel companies, seated in their secret hideouts deep in the East, turn out figures that are clearly based on popular franchises, with likenesses of famous actors. And it’s not all about raping other people’s copyrights for a quick buck. Nah, in a lot of cases, like today’s review, it’s about getting figures into the hands of collectors, that otherwise wouldn’t exist. Oh, and yeah… it’s also about raping other peoples’ copyrights for a quick buck. Hot Toys stepped up and gave us Netflix versions of The Punisher and Daredevil, but sadly they stopped there. And that brings us to Toys Works’ Miss Jones, a figure that steps up to fill a slot that Hot Toys failed to. Let’s take a look at Not-Jessica!

The box is suggestive of some tough times ahead. It’s totally utilitarian and in some ways rather humorous with it’s curious translations. The artwork is pretty faint, so much so that it’s hard to make out. The bottom of the front panel shows a cluttered desk and the back is a monochrome illustration of Miss Jones with her camera. The bulk of the box is a crossword puzzle of words, including gems like eye infidelity and woman lifestyle other odd throwaways include frustration, talking, and hat. All things that instantly come to mind when thinking about the Jessica Jones Netflix series! Only not at all. Not that I’m complaining, mind you, because once upon a time you’d be lucky to get a bootleg figure like this wrapped like a fish in old Chinese newspapers. Suffice it to say, the box here is totally serviceable and nothing more. The figure comes ready for display, so let’s check her out.

Jessica dons her trademark outfit, consisting of a pair of faded blue jeans, a tan T-shirt, black leather jacket, gray scarf, and black boots. The costume fits the figure very well and avoids that puffy look that we sometimes get with sixth-scale costumes when not done by Hot Toys or Sideshow (I’m looking at you, Big Chief!). Starting below the waist, the jeans feature immaculate white stitching, belt loops, and functional pockets! There are even tiny silver rivets on the back pockets. The boot feet, include sculpted laces up the sides, silver painted buckles, and even sculpted treads on the soles.

Above the waist, the shirt is snug enough to show off that she has an anatomically correct chest (more on that in a bit!), and it’s sleeveless like a tank-top, although It’s intended to be a full shirt. The leather jacket is nicely tailored with more of that tight stitching. The zipper is just painted on, and I’m fine with that. The lapels on the collar tend to jut out a bit, but not too bad. I may be tempted to pin these down at some point. The scarf is a loop of gray cloth and she also has a finger-less cloth glove on her left hand, which I discarded because it didn’t fit right. So all in all the outfit is solid enough, but it just lacks that extra filter of realism that the Sixth-Scale big dogs manages to achieve. It looks like well-made action figure clothes and not shrunken down real people clothes that we get from the experts. 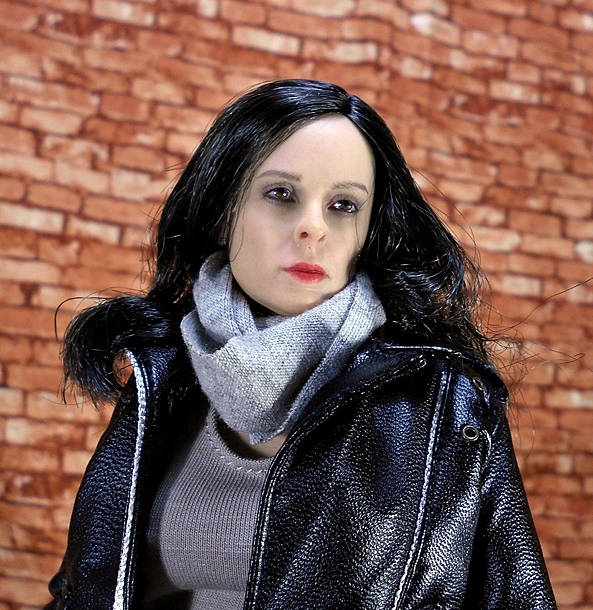 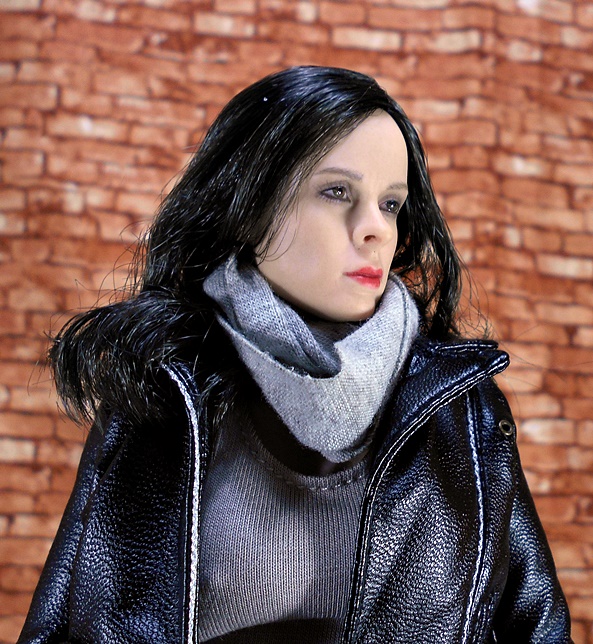 The portrait is nothing special, but considering the source, I’m not totally hating it either. It’s obviously far from a dead ringer for Kristen Ritter, but there’s enough in there, at least from certain angles, that with the context of the outfit it manages to get by. It’s far from what I’m used to seeing in this scale, but much better than I would have expected from a third-party sculpt. Likewise, the paint is pretty good too. The eyes have a little of that spark of life and the eyebrows and lips are neatly painted and not overstated. The rooted hair falls naturally around the face, but it requires a lot of futzing to get it under control, and even then I’m not always successful. I’ll concede that I’m not doing this portrait any favors shooting under bright studio lights, but in hand and on the shelf, it looks a bit better.

The body isn’t a Phicen-style, at least not completely. The torso does feature the silicone-type skin, which means it does feel like real skin and it’s all sorts of squishy. The arms and legs, however, are hard plastic and feature what appear to be double-hinges in the knees and elbows, rotating hinges in the shoulders, and possibly ball joints or rotating hinges in the hips. With a costume like this, the figure doesn’t lose anything by going jointed rather than seamless. The body-type suits the character quite nicely and she scales pretty well next to my Hot Toys Daredevil. The wrists consist of the usual pegs and she has a total of three sets of hands to choose from. 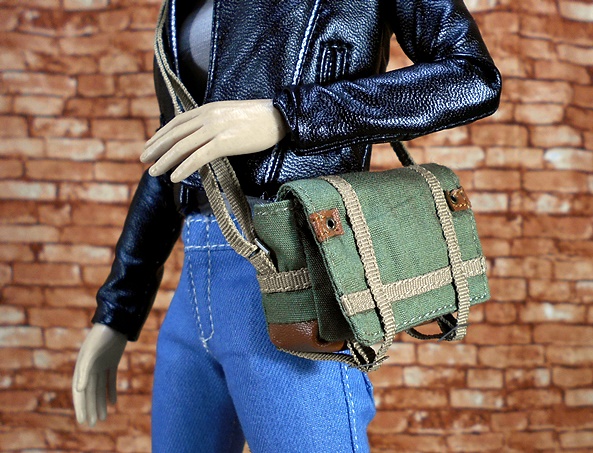 Toy Works did not exactly weigh this figure down with a plethora of accessories. Indeed, she only comes with two: A satchel and a camera. The satchel is quite nice and features a canvas-like material and working straps. It fits over her shoulder and looks great on the figure. 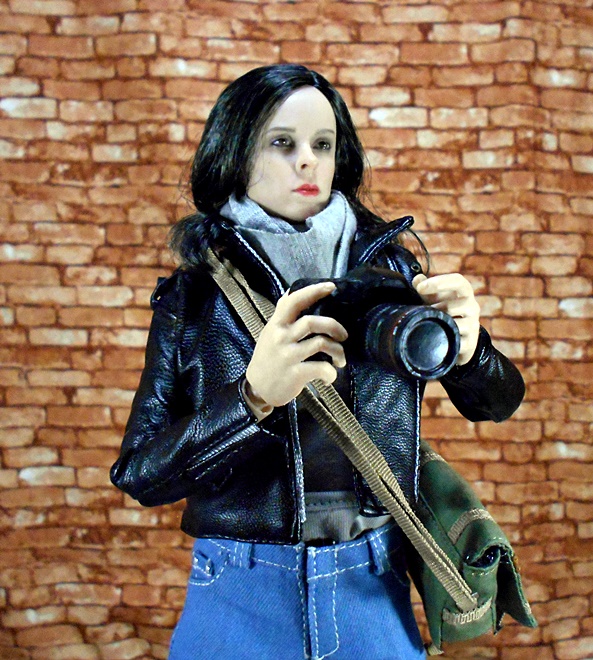 The camera is just a hunk of sculpted plastic, but it looks good and features some printing on it to add detail to the sculpt. Her hands don’t seem to be made expressly for it, but they do work with it. One thing to note, the wrist pegs aren’t all that secure and sometimes they pop out when I’m trying to get her to hold stuff.

The biggest omission when it comes to accessories is booze. Fortunately, there are plenty of options online for Sixth-Scale liquor and beer bottles, so I was able to set her up with some libations. Just keep in mind that they aren’t included with the figure. A stand, however, is included and it’s the generic crotch-cradle type that Hot Toys used to use. There’s no branding on it at all. 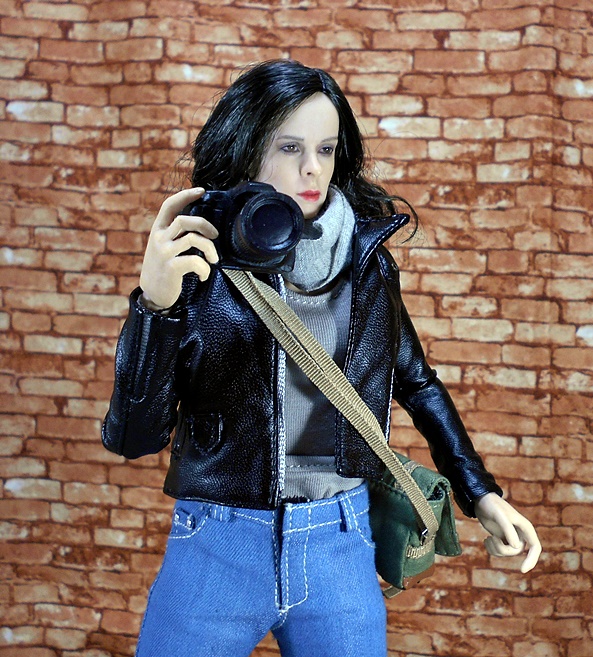 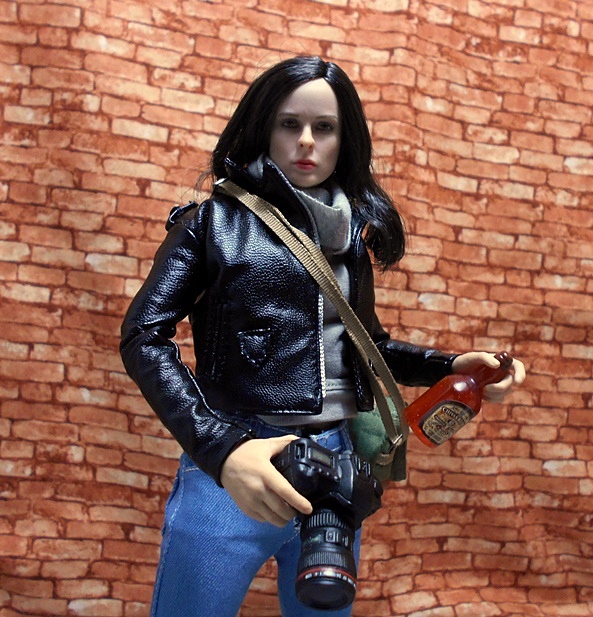 With the Marvel Netflix Universe either done or in limbo, it didn’t seem likely that we were going to get a proper Jessica Jones from Hot Toys, so I was more than willing to take a chance with Toys Works’ version. On the one hand, I’m OK with what I got, but I don’t think I’ll be doing this again, unless I’m really desperate to put a particular neglected character on my shelf. The weakest thing here is easily the portrait, but it’s still fairly tolerable to me. Still, here’s a lesson as to why license approval is so important with those official figures. In the end, this one reminds me a lot of the early Sideshow stuff. At the time, those figures were amazing, but they haven’t aged well among the current competition. Miss Jones is almost there, but not quite.