The folks at Diamond Select have been busy raiding old Disney movie licenses for action figure fodder. Not long ago I checked out their offerings from the 1979 sci-fi flop, The Black Hole, and I’ve yet to getting around to their Tron figures. Well, now I’m back to have a look at their figure from the 1991 film The Rocketeer! To my knowledge, I believe this figure was actually released as part of the same case assortment as the two Black Hole figures. At least I got them all in one assortment from an online retailer. 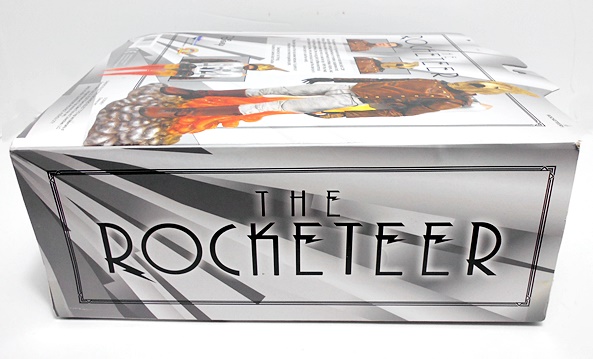 I’d say the packaging is overcompensating for the film’s poor Box Office take, but then Diamond uses this over-sized presentation for all their Select figures. It looks nice, but it’s not collector friendly and when I’m done opening these, it feels like there’s usually a lot more trash to throw out than toy to keep. And if you decide to keep it sealed, DST made the dubious decision to package him without his helmet on. More on that in a bit! Despite not garnering the reception Disney had hoped, The Rocketeer seems to have come into its own lately with fans rediscovering just what a fun and charming movie it is, and that’s cool because we’re seeing some of that expressed through the collectible market. Funko had a couple of tries with both a 3 3/4-inch ReAction figure and a 6-inch Legacy figure. The ReAction figure was OK, but I never bothered with the Legacy release. Let’s see how DST did!

As you can see from the packaged shot, he comes out of the package without the helmet on, but I’m starting with the helmeted head, because that’s the look that I was most excited about. To me, the design of Cliff Secord’s costume is so iconic that it practically transcends the comic and film it’s based on. The retro Flash Gordon look of leather tunic and Art Deco hood ornament helmet is such a thing of beauty. And I think DST did a pretty solid job recreating the costume here. The trousers flare at the thighs in military fashion and his high boots look fine even though there isn’t a lot of detail to them. The tunic has a glossy brown finish to give it a leathery look and the chest piece is surrounded by sculpted buttons. If I have one complaint here it’s mostly with the odd jointing that DST uses. So let’s touch on that before moving on. 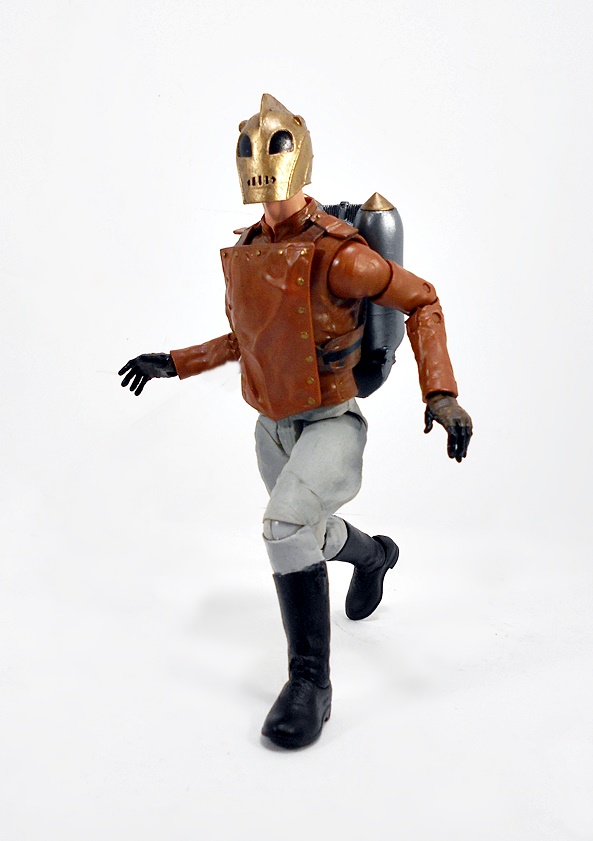 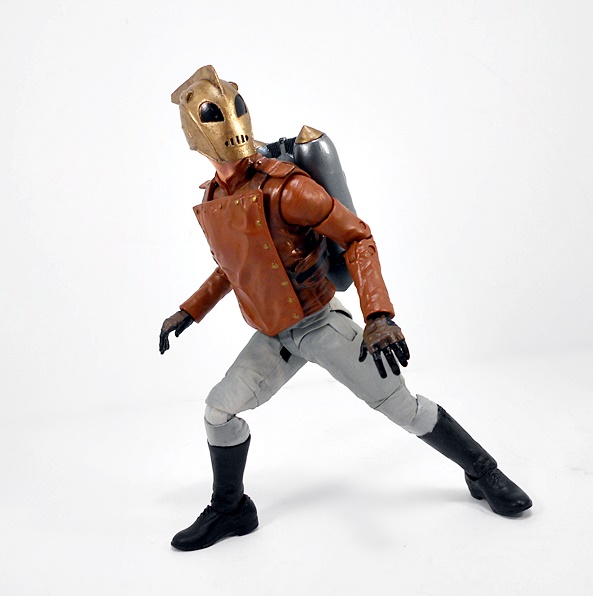 The legs use rotating hinges in the knees and ankles, which is fine, but I’ll never understand why they go with these lateral hinges in the hips. They just look weird. I’m not sure if there’s any articulation in the torso, but mine doesn’t want to move and I’m not going to force the issue. So that means no waist swivel, ball joint, or ab crunch. That’s pretty disappointing. The arms feature rotating hinges in the shoulders, swivels in the biceps, and double-hinged elbows, which is fine, but the arms look a bit pinched and weird. Finally, the wrists and neck are pegged ball joints. You get a few sets of hands to swap out, including one pair without gloves. Some of the hand choices are odd. For example, there’s one that clearly looks like it’s meant to hold a gun. 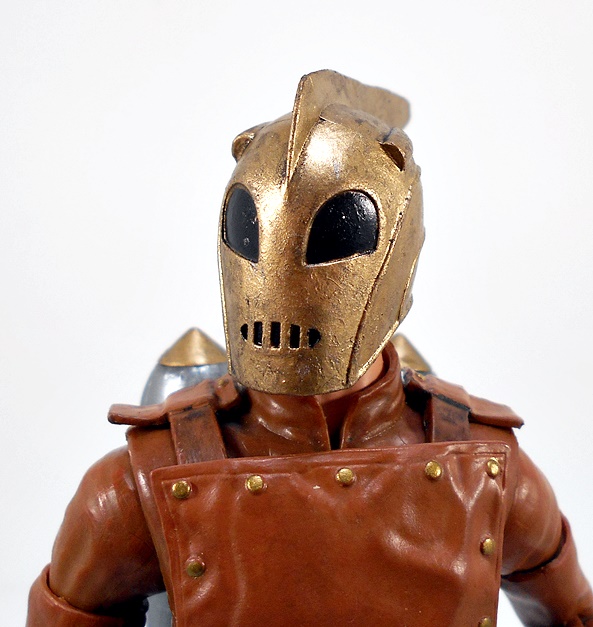 With that out of the way, let’s get to the good stuff. The helmet looks great. The big bug-like eyes and the segmented mouth grill are painted in black, while the rest of the helmet is painted over with a weathered brass finish. Of course, the design looks best in profile to show off that lovely back-swept fin. 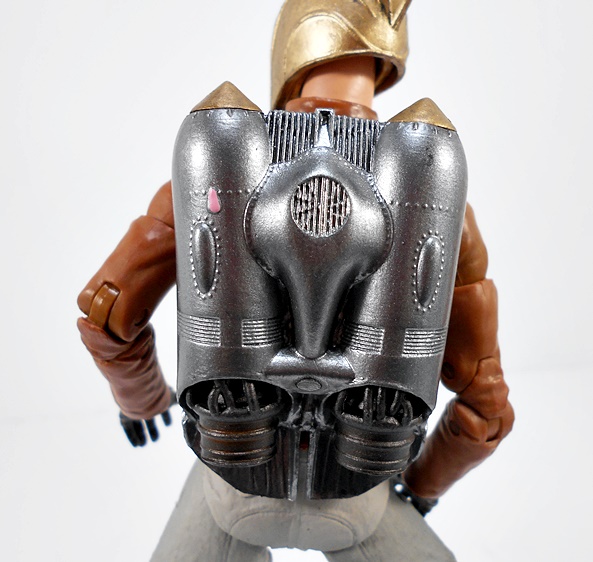 And he’s not called The Rocketeer for nothing! DST did a wonderful job recreating the rocket pack, in all it’s curvaceous and bulbous glory. It’s got grills and rivets, and I can even make out the fan under the circular grill in the middle. There are some exposed cables sculpted above the thruster modules, and yes they even sculpted and painted the piece of chewing gum used to plug the leak in the film. The silver finish has a nice metallic sheen to it and gives way to a more functional gray down below, while the tips of the two tanks are painted bronze to match the helmet. Sadly, the pack is not removable. 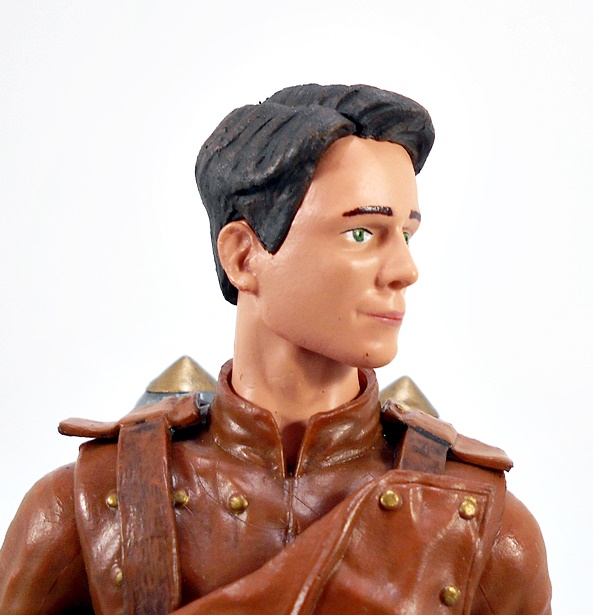 On a downside, the un-helmeted Secord head is kind of embarrassing, and I’m not even talking about the likeness. The sculpt is really soft, the expression is strangely derpy, and the paint is really amateur, giving it a mannequin-like appearance. When I first saw this head I was instantly reminded of the Vault Dweller figure that Funko did for their short lived Fallout line. And I can’t say enough about how much that isn’t a complement. This just looks wooden and not at all befitting of a $25 collector figure. On their worst day Hasbro is turning out much better portraits than this in either their Marvel or Star Wars figures.

In addition to the hands and the extra head, you also get a replacement chest flap where it’s partially unbuttoned and hanging off. It’s not a bad bonus, I guess but I’d rather that cost went into a better portrait. It’s also the most likely reason we didn’t get some articulation in the torso. 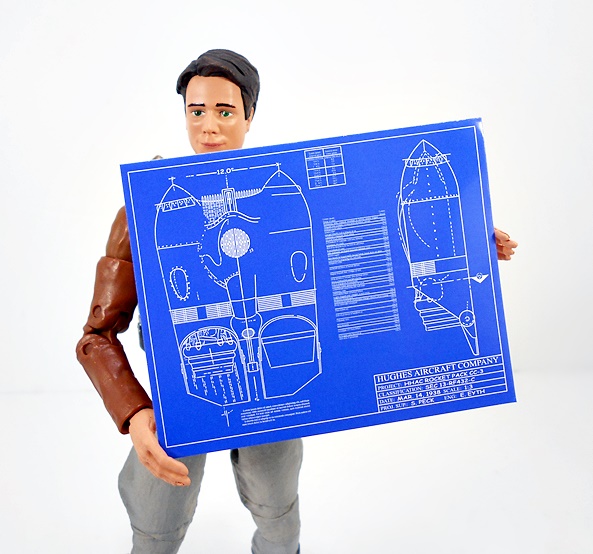 And the figure also comes with the blueprints for the rocket pack, which is beautifully printed on a stiff piece of thin cardboard. This is a pretty cool addition and it’s a lot more high quality than I expected it to be.

The figure also comes with some excellent effect parts. First, you get two thrust pieces that plug into the rocket pack’s thruster cones. They’re cast in semi-translucent plastic with a yellow-orange tint to them. 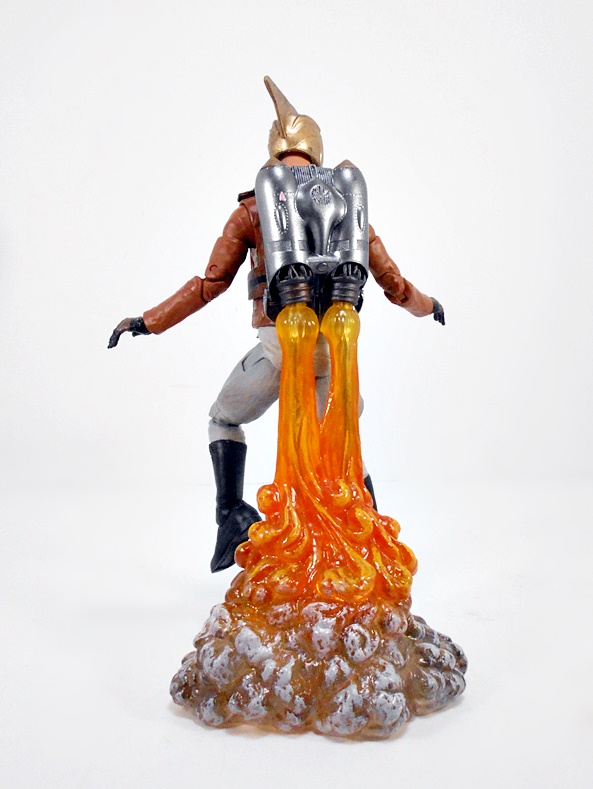 And saving the best for last, you get this blast off effect piece that doubles as a display stand. The sculpting here is excellent with all the swirls of the rocket thrust mingling with a chalky smoke at the bottom. It also does a great job of holding the figure.

If I had to recap this review in one sentence, I’d say that I like this figure, but I don’t love it. Now, while I confess that I do enjoy the movie, I was originally going to pass on this figure. The fact that it was bundled in with The Black Hole releases was what made me concede to just order the case. There’s some good stuff here, to be sure, but DST has been doing their Select line for a long time, they should be on top of their game by now, and some aspects of this figure just doesn’t reflect that. I think I wound up paying about $24 for this guy, and while you definitely get quite a bit in the package to add value, I’d rather some of that just went into fine-tuning the figure itself.

2 comments on “The Rocketeer by Diamond Select”