My last excursion into Marvel Legends (several Marvel Mondays ago) saw me randomly drew Beta Ray Bill from the Pile-O-Shame, and I decided that I might as well finish off that wave and open the remaining figures. Keep in mind, I’m not building the Hulk BAF (those parts went to my nephew), but I’d still like to put the rest of this assortment to bed, since it’s already pretty stale. And so today I’m checking out the Princess of Wakanda, Shuri from Infinity War! 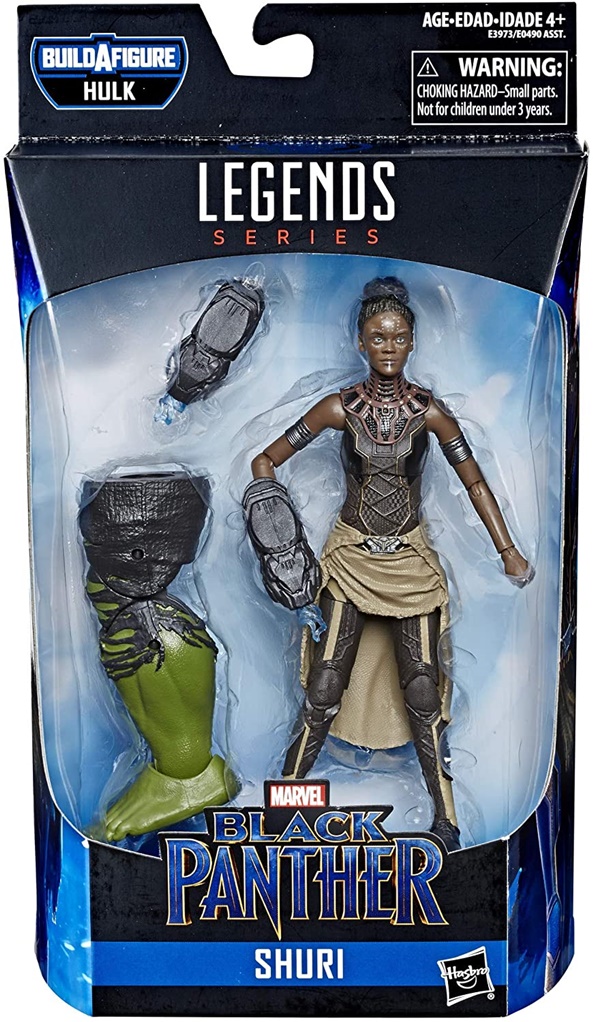 Black Panther is a Marvel movie that I enjoy coming back to, but very rarely ever finish. The beginning of that flick (let’s say the first third or so) is easily it’s high point for me and I really dig the stuff between T’Challa and his deceased father, but by the time I get about halfway through it, it starts to lose me and the movie feels like it fizzles out. And the less said about the final battle the better. Sometimes, I’ll just finish it in multiple viewings, but it’s safe to say I’ve seen the first half of it a lot more times than the rest. With that having been said, Shuri was a fun character and I was glad she got some screen time in Infinity War and Endgame. I was irked that she was conspicuously absent from the Marvel Legends Black Panther-themed waves, but now all is forgiven. 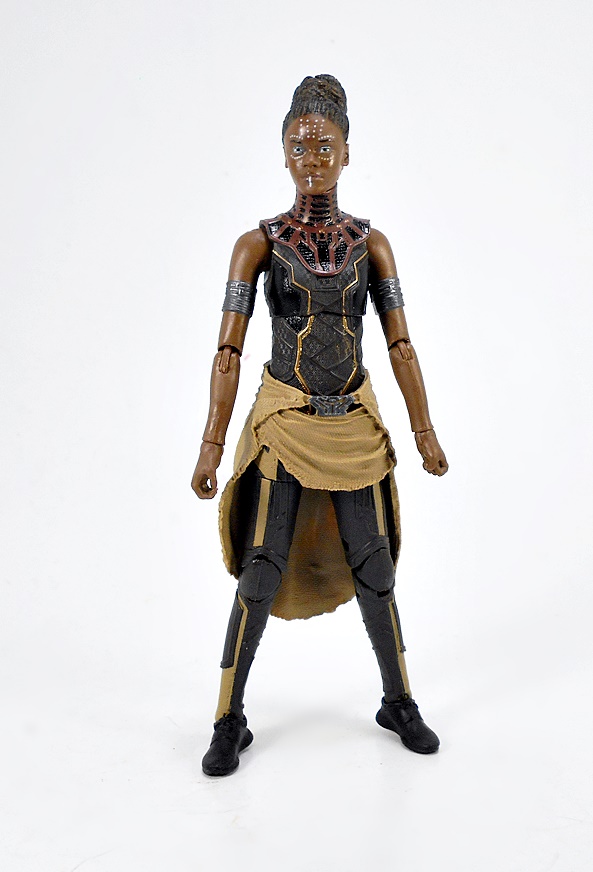 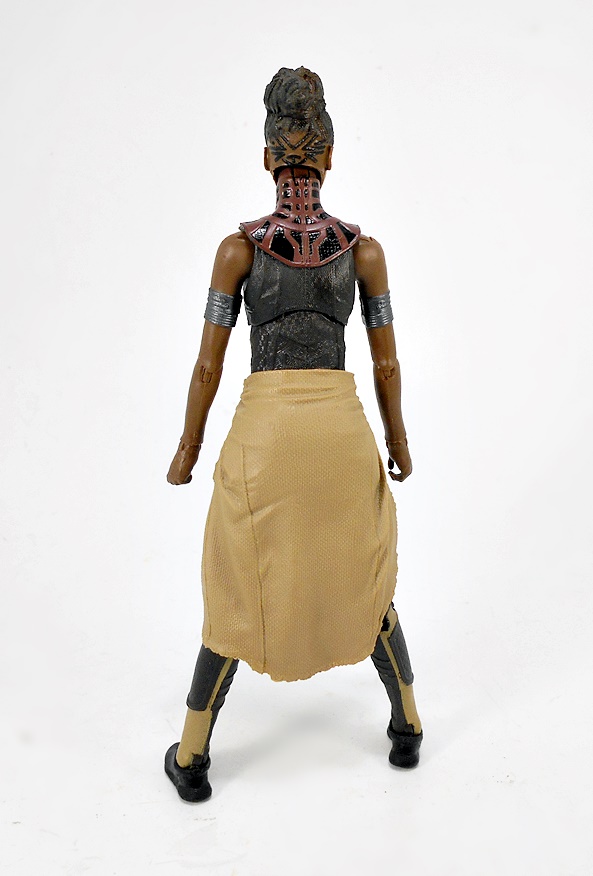 And here she is looking fine in her Wakandan garb. The outfit is recreated with lots of sculpted detail and some very subtle texturing, which looks like some kind of advanced fabric weave. It’s so subtle that I really have to turn the figure around in the light to reveal it. I dig that! You also get some sculpted panel lines and some beautiful detail on the neck piece, shoulders, and chest. The deco is a mix of brown, tan, and glossy black along with some copper piping. Meanwhile the sculpted bicep bands are like a gun-metal gray. As always I appreciate the mix of gloss and matte finishes that Hasbro often does with these MCU costumes. 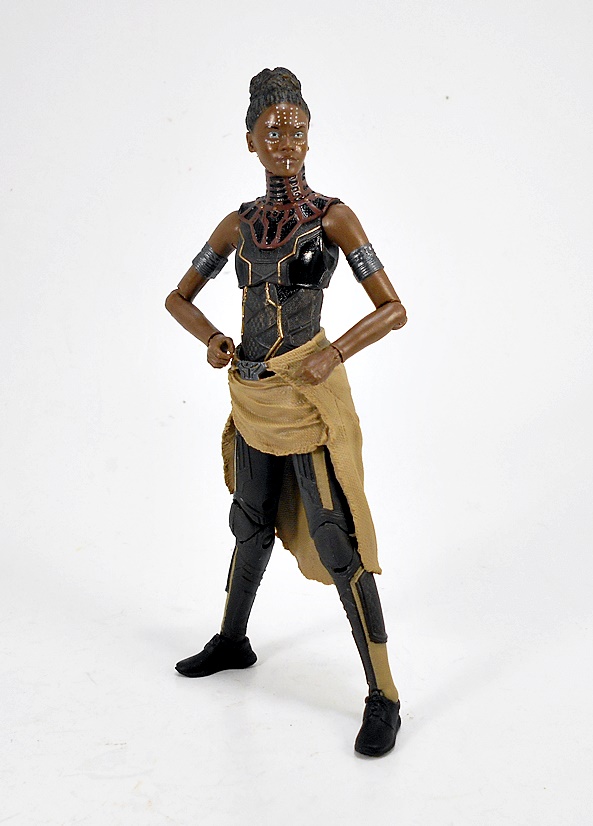 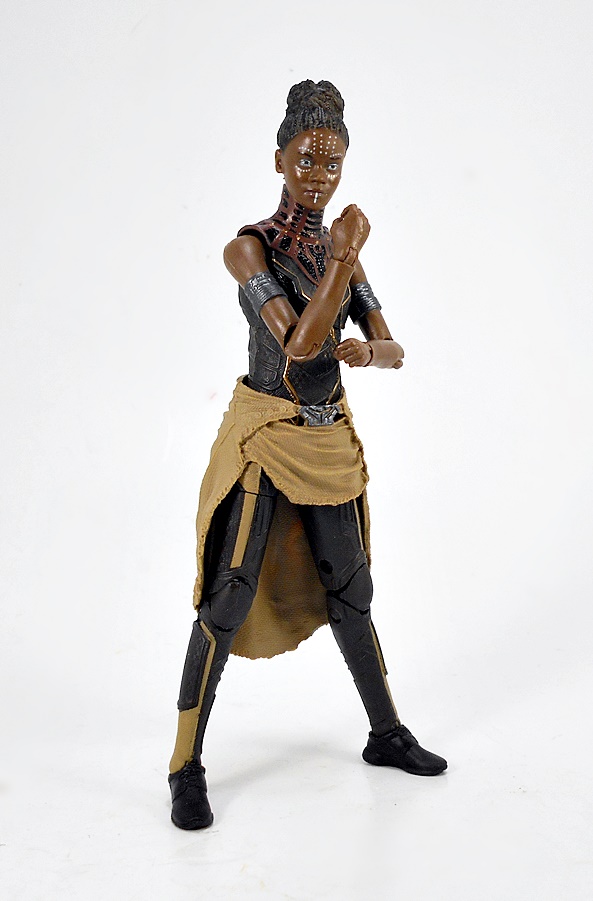 Shuri also sports a sculpted plastic sash around her waist, which drops down behind her legs. It’s textured like fabric with some sculpted stitch lines and a very fine frayed edge along the bottom. It’s meant to be held on by a sculpted belt-buckle looking device colored to match her arm bands. As much as I love the look of this waist garment, it does unfortunately impede her leg articulation. 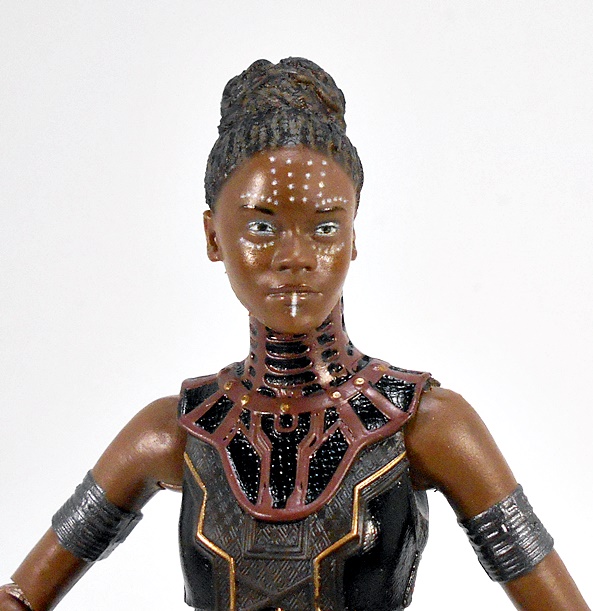 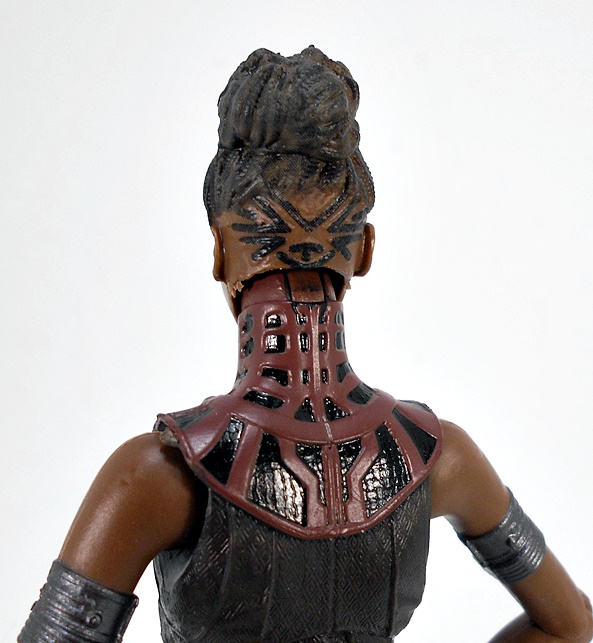 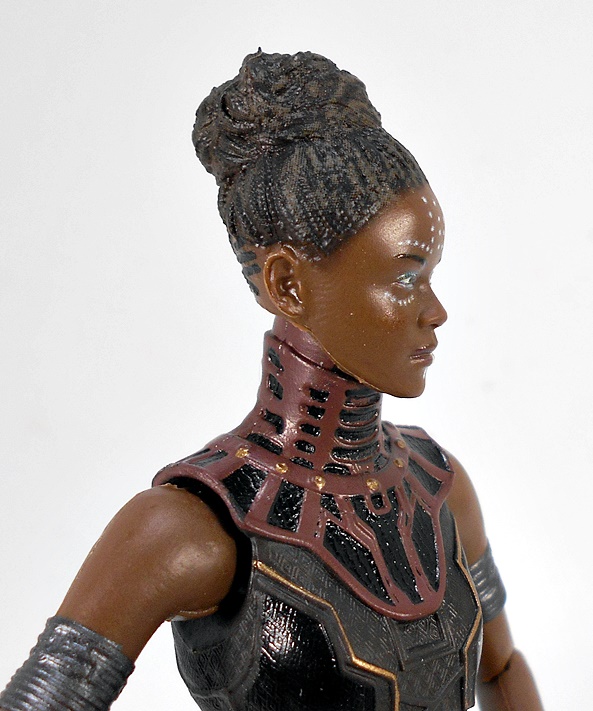 Generally speaking, Hasbro’s MCU likenesses have been excellent and I think that’s the case here as well. It’s certainly recognizable to me as Letitia Wright. She has some sharply placed dotted face paint, and the hair sculpt is extremely well done, especially the patterns on the back of her neck. 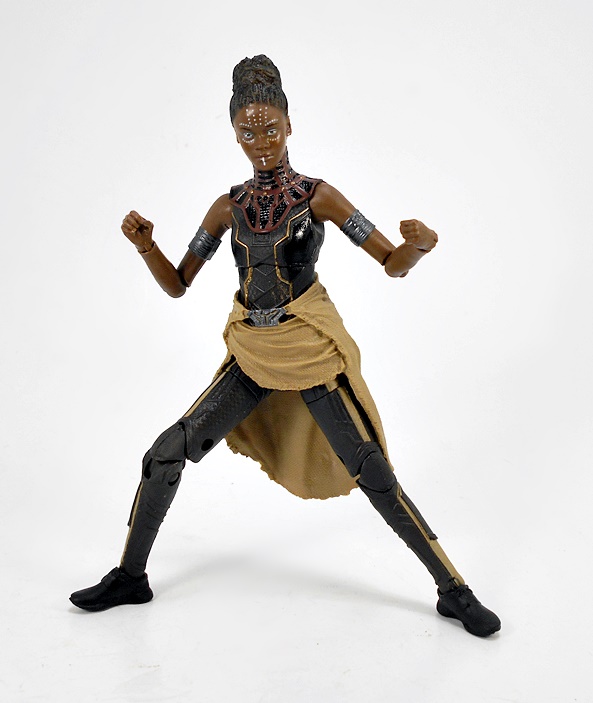 Getting back to articulation, Shuri’s is pretty solid, with a couple of my usual nitpicks. The arms have the standard rotating hinges in the shoulders and wrists, but she’s a gal and we all know Hasbro only gives the ladies rotating hinges in the elbows, instead of the double-hinged elbow with bicep swivels that the dudes get. Shuri also has those weird elbow hinges that kind of stick out when the arms are bent at their 90-degree extremes. The rest is fine, though. She has ball joints in the hips, double hinges in the knees, swivels in the thighs, and both hinges and lateral rockers in the ankles. She has a ball joint under her chest and the neck is both hinged and ball jointed. 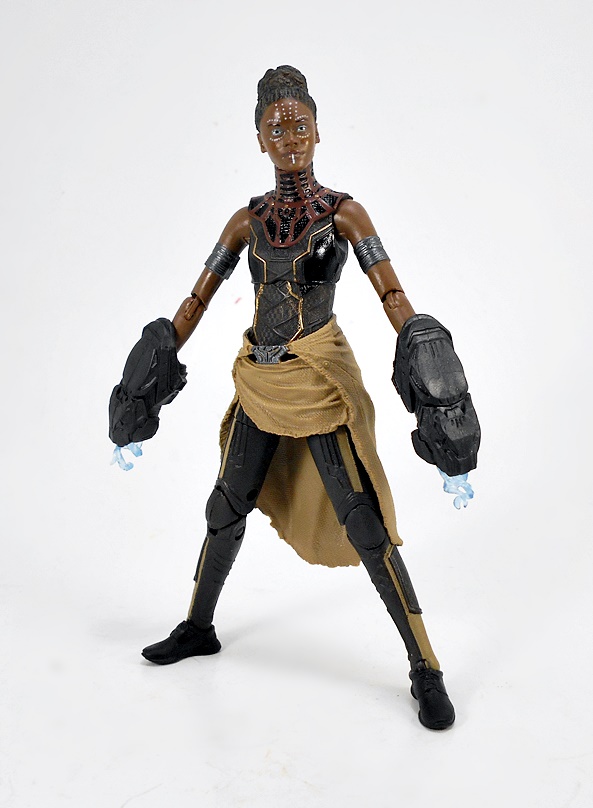 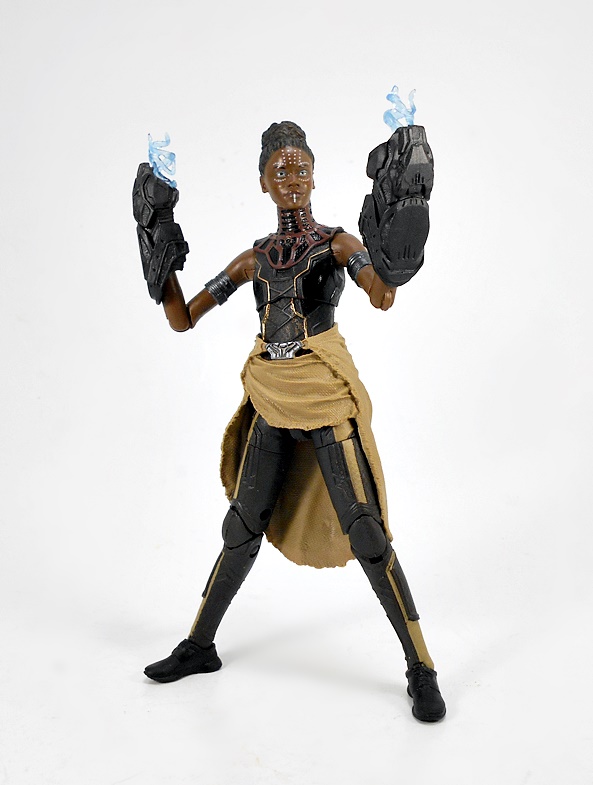 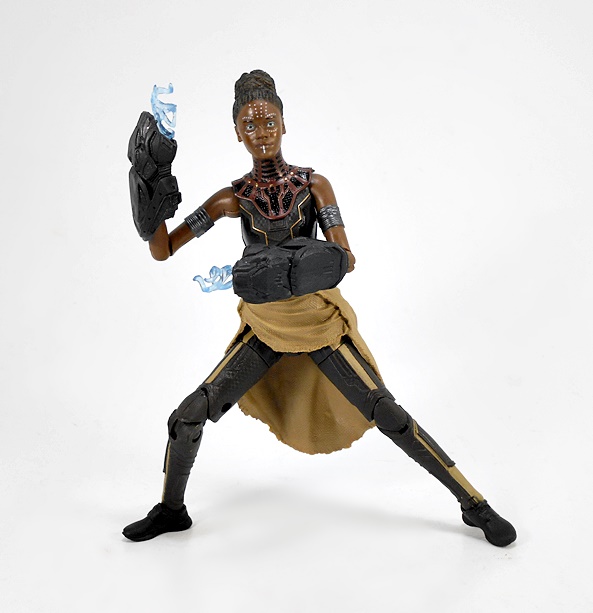 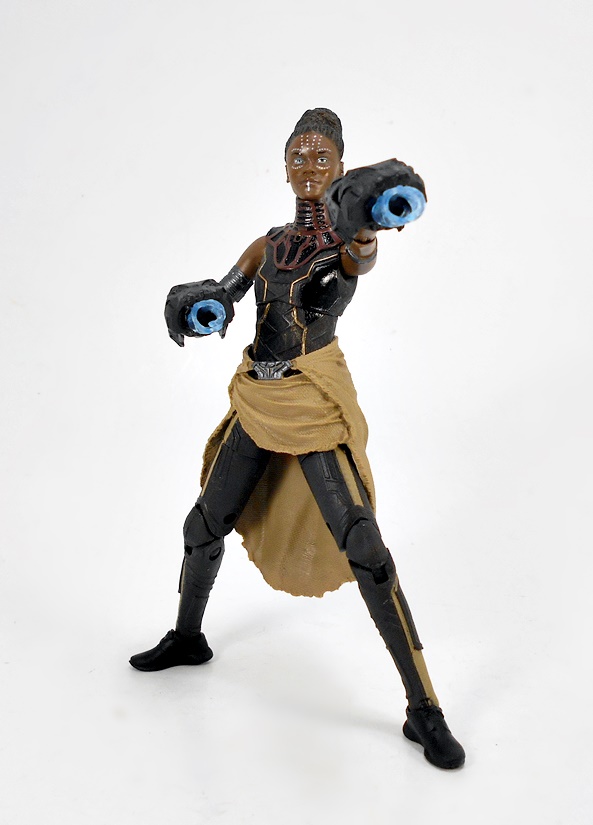 Shuri comes with her vibranium gauntlets, which clip onto her wrists. They hold on very well, but I think it would have been cool to have these swap out with her hands to make them fully enclose her forearms. Either way, the sculpts look great and they each have some translucent blue energy crackling from the ends. 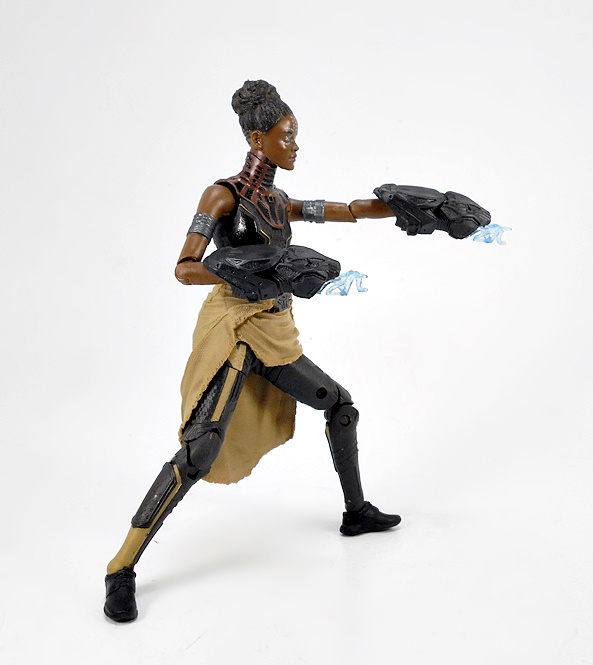 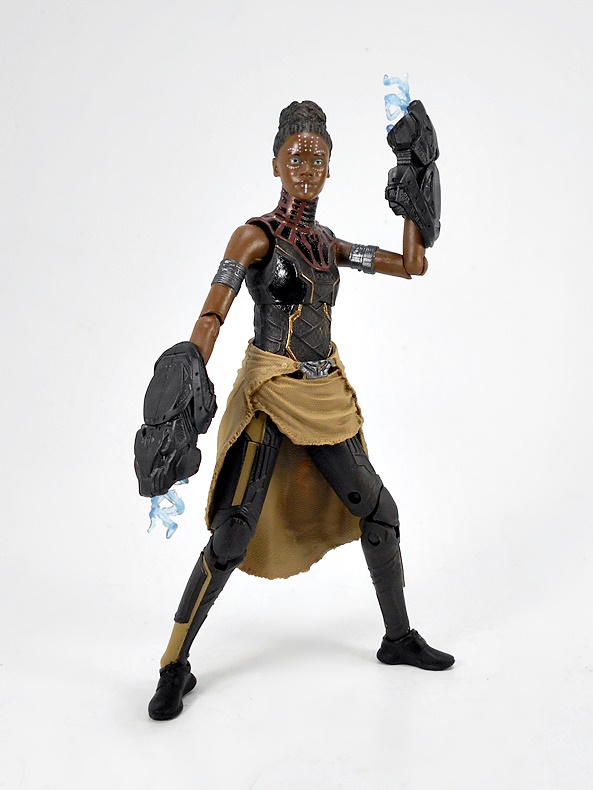 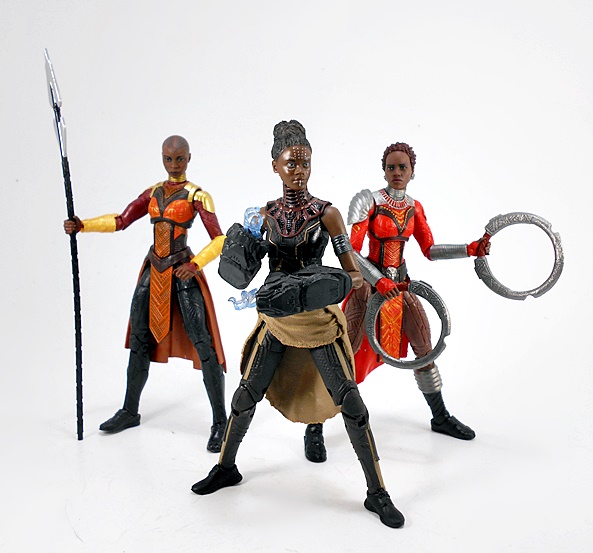 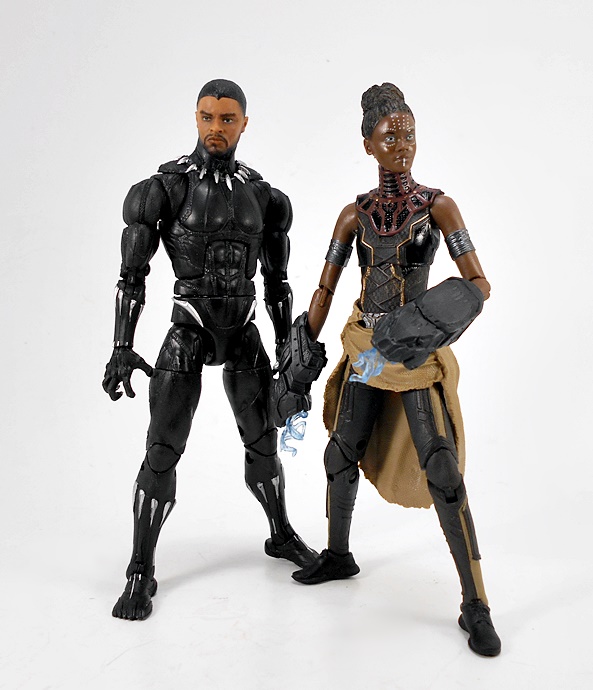 Shuri is a great little figure and I’m so very glad we finally got her in the Legends format. Hasbro did quite a beautiful job on the her, but that’s par for the course with pretty much all of their Black Panther figures. Heck, adding her to my collection makes me want to double back and finish off that M’Baku Wave. And speaking of which, while I did say that I’ll be finishing up the rest of this wave, I think next week I’ll detour back to the M’Baku Wave so that I can finally open Ulysses Klaue.