After detouring for a couple of Marvel Mondays, this week I’m back to looking at Marvel Legends. And yeah, I Know I said I was going to start digging into the Sugar Man Wave, but before I get into that, I thought I’d tear into this new three-figure set that hit my doorstep from Amazon last week. And I hope you aren’t all X-Men’ed out because… IT’S MORE X-MEN!!! 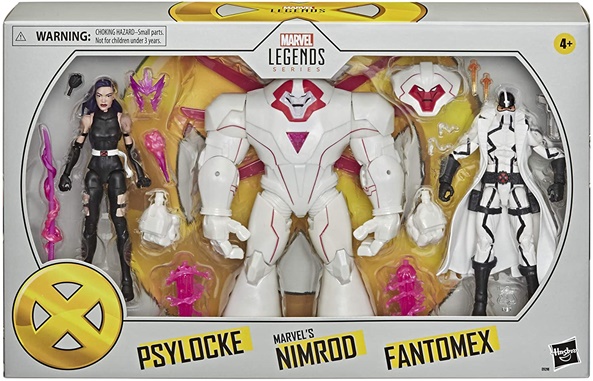 This rather large boxed set comes to us as an Amazon Exclusive, and these days I find those are the best kinds of exclusives. Not only was I able to pre-order it without a headache, but did you forget to pre-order? Well, no worries, it’s still up on the site, at least is at the time I’m writing this. The presentation is pretty snappy, with a silver box and a crisp and clean gold X-logo to brand it up. I wouldn’t mind returning these figures to the box for display, and I probably will for a while. That is until the Toy Closet gets too cluttered and I have to start taking extreme measures by culling boxes again. I’ll also throw out there that this is a damn heavy box, as it contains a lot of plastic! Let’s have a look at the figures, and I’ll start with Fantomex first! 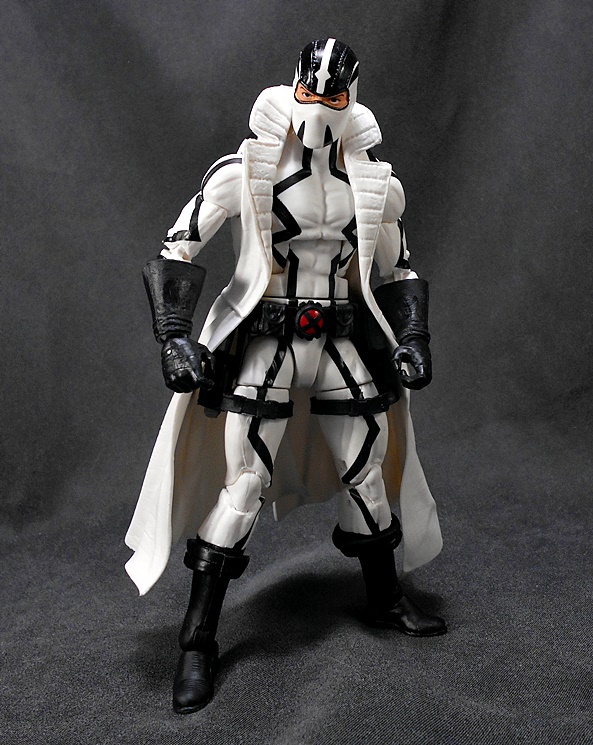 We last saw Fantomex waaaaay back in Wave 2 of Modern Legends as part of the Anim Zola Wave. Holy hell, that was eight years and what seems like about a million figures ago! I actually expected a repack, which goes to show you how much I wanted Nimrod, but upon closer inspection I was pleased to see that this is an updated figure. Did we really need a second attempt at Fantomex after all this time? Are there not other characters without figures patiently waiting for their turn? Yeah, but I will say that I’ve always loved Fantomex’s costume. He just looks so bad-ass. But, honestly this one perplexes me a bit. It would have made more sense to just repack him, but let’s dig out the original and do a quick comparison!

At first glance they look quite similar, but a closer inspection shows that they are entirely different figures. I think the older figure still holds up quite well, but this new release has a better build and is slightly better proportioned. Hell, just getting rid of those prehistoric ball joints in the hips is a big improvement. I thought the jackets were the same, but it looks like the older one is sculpted to look like it’s blowing to the right a bit, while the newer one hangs down straight. Otherwise, the two plastic garments are nearly identical. The gunbelt is new, and that makes sense, since the guns are also new. The new figure has a smaller belt buckle, and thigh straps to hold the holsters in place. The older figure has sculpted straps just above the knees, whereas the new one does not. On the downside, the tops of the boots on the new figure are separate pieces and held on by friction. And when I say “held on” I’m being generous, because they are constantly sliding down to his ankles. The old figure had these sculpted on and it was much better. Finally, the gauntlets on the newer figure are flared much more dramatically at the elbows. I think this looks better, but it does interfere with the elbow hinges a bit. Both figures have balance issues, but I think the new one is slightly better. All in all, I’d say the new version is the better figure, but there are still some compromises going on here. 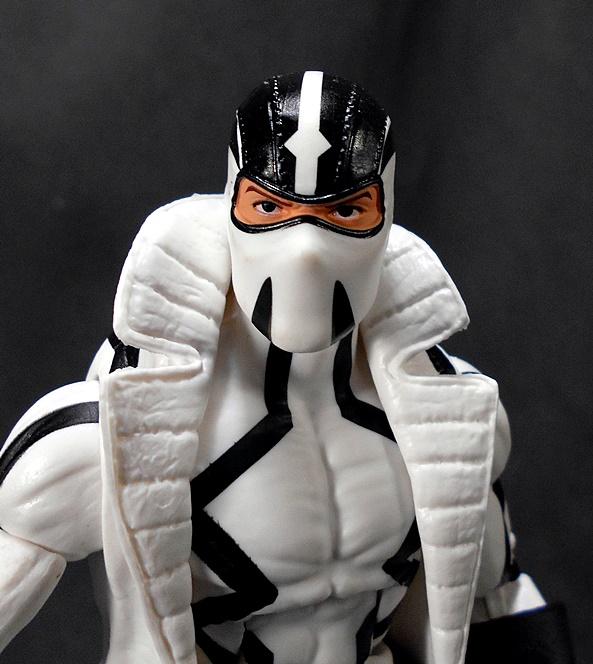 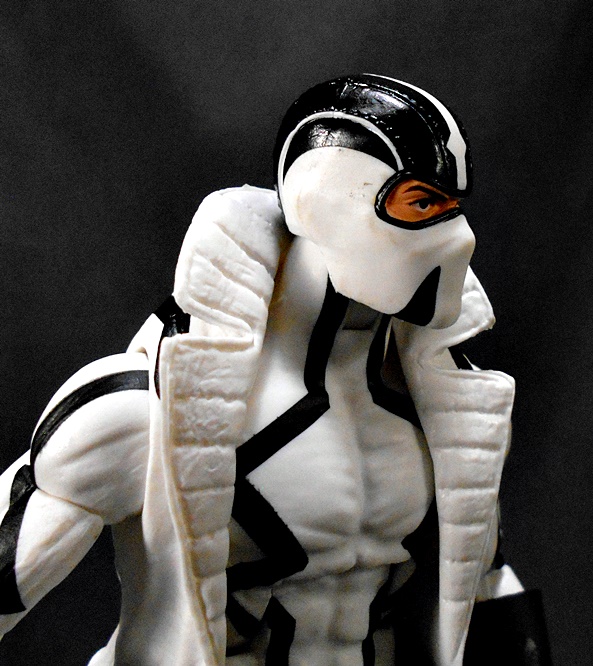 The head sculpt is definitely an improvement over the old one. The noggin is a little bigger to better fit the body, and the sculpting and paint are both tremendous improvements. The eyes on the new figure are look absolutely fantastic. The black striping is a little different, and this new head shows a little less of the facial features under the mask. I really love what they did here.

As I already mentioned, new Fantomex gets new guns, and these are pretty great little sculpts. They’re a little bigger and beefier than the old guns, and they look a little less sci-fi and a little more credible as real world automatics. They’re cast all in gray plastic, with no paint operations, but they have lots of great detail to make them stand out. Also a huge improvement is how well the new figure can hold his guns. The old figure could barely hold his and he couldn’t hold them straight at all. So, chalk that up as another win for new Fantomex! 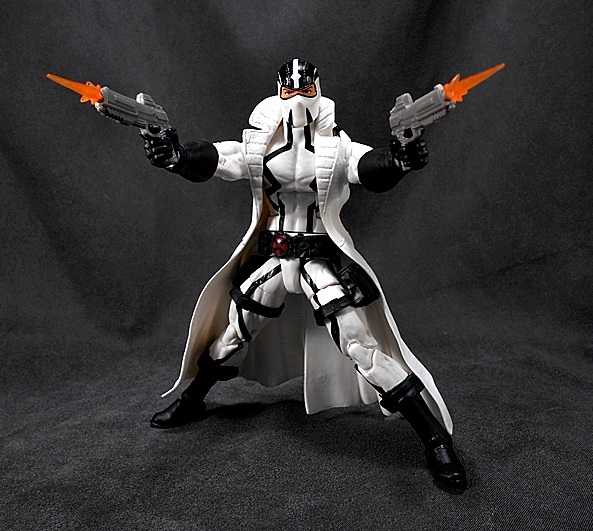 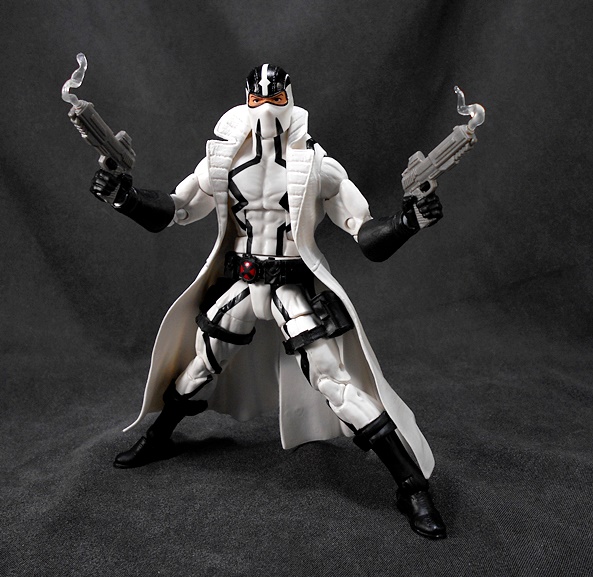 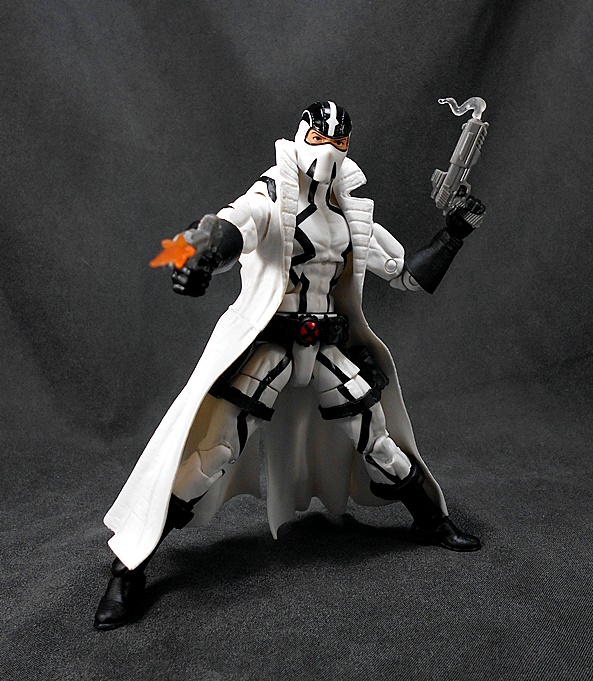 This figure also comes with some really cool effect parts for his guns. You get a pair of blast effects and a pair of smoke effects, which simply peg into the ends of the muzzles. These are tiny, and hopefully I can keep from losing them, because they are probably some of my favorite effect parts I’ve seen in the Legends line so far.  All in all, this is an excellent update to what was already a pretty good figure. And while I’m not sure I really needed to pay out for a second release of the character, I’m not terribly put out by it either. And that brings us to Psylocke! 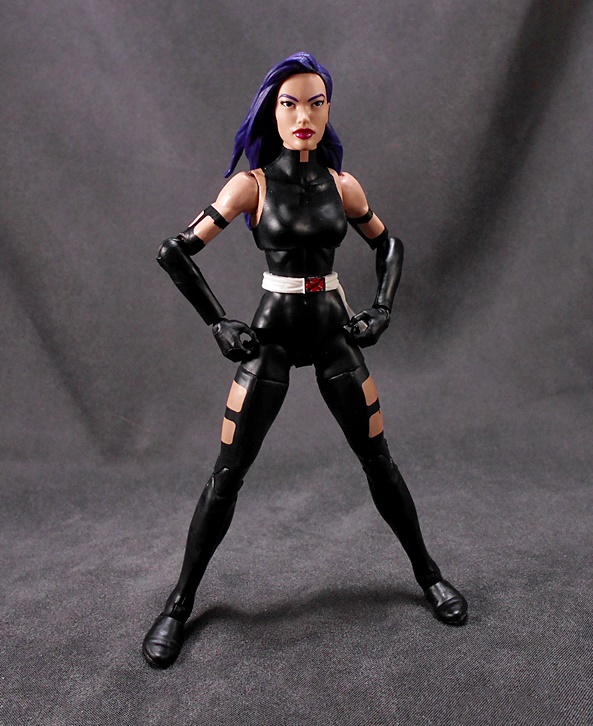 Psylocke is another double dip, but at least she’s a variant as she comes in her Uncanny X-Force costume. Sure, we just got her a couple of years back as part of the Apocalypse Wave, and I’m ashamed that I can’t post a link to that review, because I haven’t opened her yet and that entire wave is part of my backlog. I’ll get to that wave eventually! Either way, it’s nice to have this version to go with Fantomex. Plus the Apocalypse Wave Psylocke tends to go for a good chunk of change these days, so for some this may be Consolation Prize Psylocke! Like the previous release, this figure relies almost exclusively on paint to detail her costume, but it works just fine. The sash is actually a newly sculpted piece, now white and with an X-Force logo in the center. 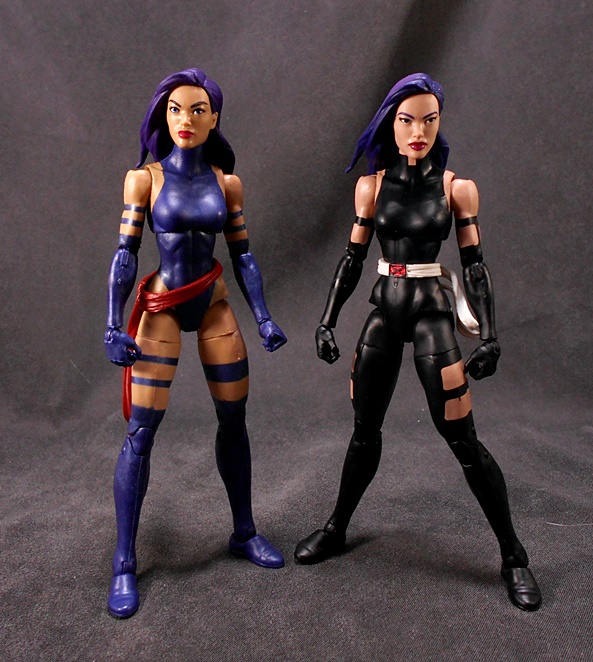 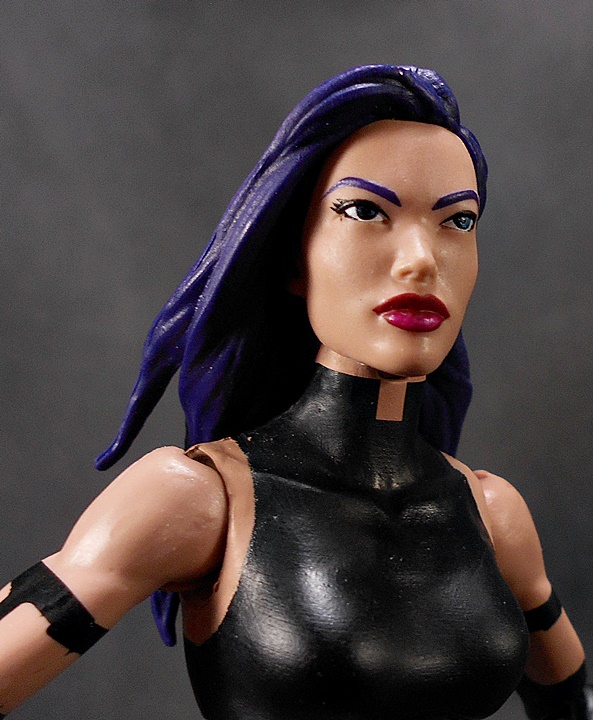 The head sculpt looks new to me, but it’s close enough to the original that it may just be from variances in the molding process and paint. It’s also worth pointing out that the skintone on the new figure is a bit paler than the last one, but that may also be due to coloring variation as opposed to being intentional. Either way, the new figure looks great. The paint applied for her eyes and lips is nice and sharp, and I dig the purple they used for her hair. 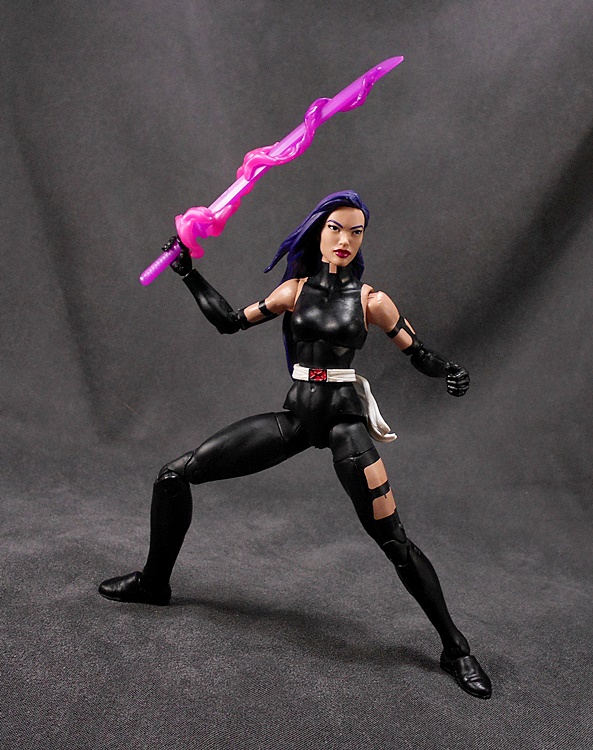 X-Force Psylocke comes with the same effect parts as the previous release, although the coloring on these new ones is overall a lot nicer. She also comes with a swappable right fist, which works a little better with the blast part, but isn’t really necessary, as it will work well enough with the accessory holding hand too. All of these look great, but I’m extremely partial to the Katana. She just looks fantastic wielding it. It may seem like I’m running through this figure rather quickly, despite not having reviewed the original yet, but it’ll happen. Plus, I still have the main attraction from this three-pack to cover, so let’s have a look at Nimrod!

I gotta say, I absolutely love the design of the character. He’s got a sort of Bruce Timm stylized look to him that is so bizarre and unique when presented among the regular looking characters. It’s like because he hails from the future, he actually looks out of context in the present. Same goes for how smooth and nearly featureless his body is, making him look sterile and super advanced. It’s just brilliant and it’s even better when presented as this giant slab of an action figure! The entire body is comprised of some lovely pearlescent white plastic that gives him a cool sheen, disturbed only by the pink pin-striping and the translucent pink triangle embedded in his chest and showing off just a hint of some finely sculpted circuitry. From behind, Nimrod shows off some red paint accents and his translucent pink wings, which peg into his back, making him look all the more impressive.

Nimrod’s head is barely a head, but more like a bump coming out of his torso with a face in it. The silver face is framed with some red paint, and otherwise just sports white eyes, a black slit for a mouth, and some black grills in his cheeks. Elegant, simple, and just a tad creepy.

And if you want to go for something a little more classic looking, Nimrod comes with a swappable head with a red face. At first glance it looked fairly similar to the standard head, but it is actually a completely new sculpt, and I think I’m actually partial to it. It has a little more personality and adds a bit more color to the figure.

In terms of articulation, he does indeed feel like a Build-A-FIgure, in that he has all the right points, but being a chunky boi, some of these points don’t offer  quite as much range of motion. The exception would be in the shoulders’ rotating hinges and the fact that the shoulder armor is happily quite flexible. As a result, I was surprised at the amount of movement I could get out of the arms. There are swivels in the biceps, and the elbows are only single-hinged, but you can get a full 90-degree flex out of them. The hands are on hinged pegs. I believe that’s a ball joint in the torso, but mine only wants to swivel, and it snaps back each time I swivel it. I’m not sure what’s going on in there, but I’m not going to risk forcing it, just in case something is stuck. The legs appear to have rotating hinges in the hips, but there’s really very little range in them. The knees are double-hinged, and thus quite good and the ankles have a little bit of movement in a hinge, but not much.

In addition to the extra head, Nimrod comes with two sets of hands, fists and open, and two blast effect parts that plug into the open hands and look pretty sweet. 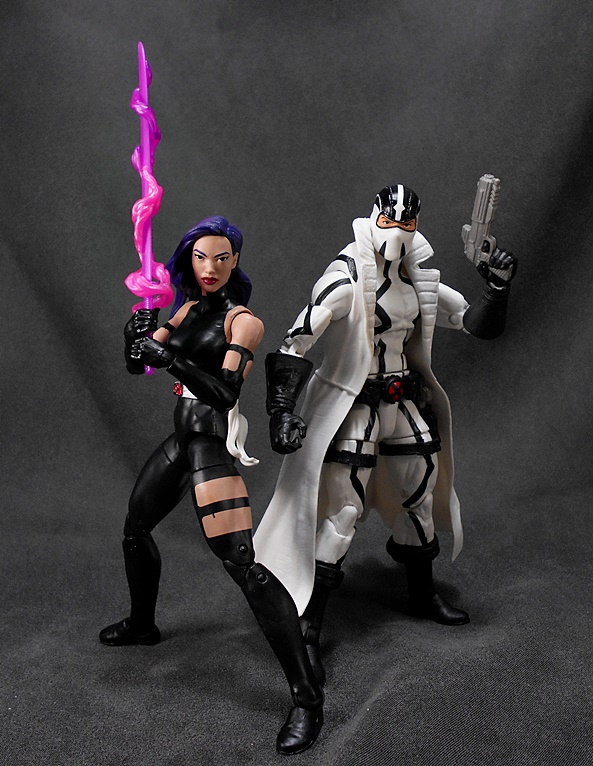 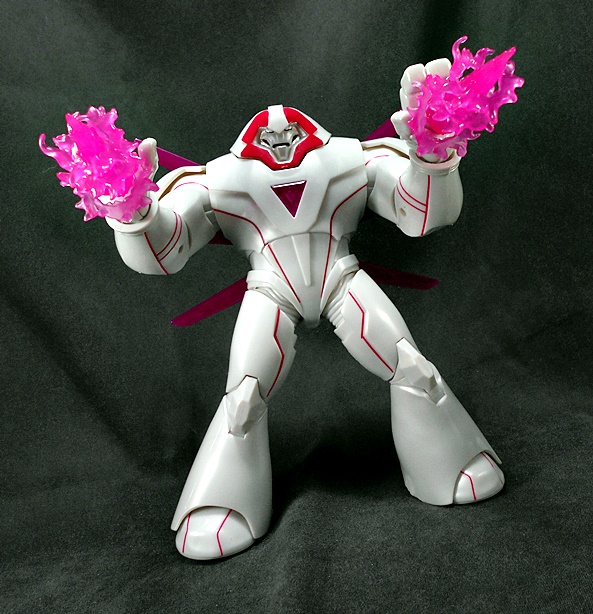 Marvel Legends never ceases to surprise and amaze me. I mean, it’s been clear that Hasbro has pulled out all the stops with this line a long time ago, but still… getting a set like this is just so magical and I think it really demonstrates what a strong following this line has. It’s an $80 set, which is probably why it wound up as an online exclusive, I’m not sure the Walmarts and Targets would want to take up this much real estate on a planogram for a set this expensive, and populated by characters that your average normie isn’t going to recognize. But while the set may seem pricey, it costs out fairly well at $20 each for Psylocke and Fantomex, that leaves $40 for Nimrod. OK, so Hasbro’s repacks of Build-A-Figures usually run out at the $30 price point, but since this is an entirely new figure, that’s probably where the extra ten bucks comes into play. Either way, it’s a fantastic set and three solid additions to my ever growing Legends collection.

3 comments on “Marvel Legends: Nimrod, Psylocke, and Fantomex by Hasbro”