Today’s review comes with a bit of a disclaimer. I jumped on buying this Neutrona Wand as soon as I watched a few videos on it and saw it in action. The build looked good, the electronics looked good, and most of all, it came with an adapter to allow a hose to go into the handle. People speculated that this was to allow it to hook up to DIY Proton Packs, but I saw it as concrete fact that Hasbro would be releasing an official pack to go with it. Will they? Who knows? But it seemed like a worthy gamble. Anyway, the disclaimer in front of this review comes in the fact that my Wand does not work, so I’m really just going to be taking a quick look at this thing before shipping it back to the retailer. I was going to skip it altogether, but then I suppose pointing out the fact that it doesn’t work is an important part of a review. So, let’s do it!

The Wand comes in a fully enclosed box made to look like an old equipment locker. It has a cardboard band around it with the branding, and interestingly enough it’s just branded for Ghostbusters and not the new movie, while the Wand itself is most definitely depicted as it will appear in the new movie. Indeed, I’m assuming the box is supposed to be the Wand’s housing when they find it in Ghostbusters: Afterlife. It’s a nice presentation even if it is just a cardboard box. The Wand is held inside by corrugate filler and comes out of the box all assembled and ready for display. There is a display stand that requires assembly, and I won’t be showcasing that here, as I unfortunately never got that far with this piece. Instead, I’m using just an generic acrylic display stand to showcase it for the review. 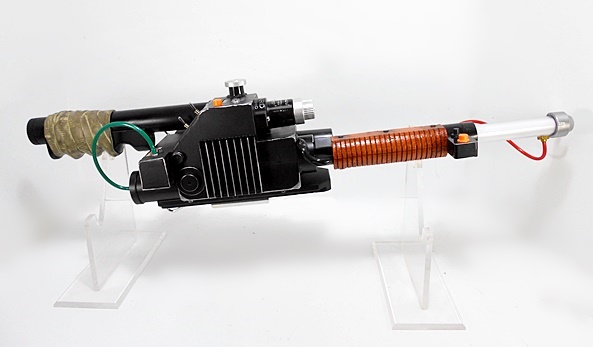 Opening the box, the first thing I noticed was how cool the Wand looks. But upon actually taking it out, it struck me how light it was. And maybe that’s a testament to the great job they did on the aesthetics. It may not look like plastic, but it sure feels like it. I’m not saying that the build quality is cheap or insubstantial, but it feels even a bit lighter than a plastic Wand of this size with electronics in it should feel. If I was Hasbro making this, I probably would have put a couple of metal slugs in it to give it some heft. But maybe once the initial shock of the weight wore off quickly, and I began to appreciate how good it looks. I can honestly say that without picking it up or taking a really close look, I could believe that this is an actual prop. There are a few giveaways, but most of it really does look that good. It’s big, but it doesn’t feel oversized, and it definitely feels comfortable in the hand. The pictures depict the wand extended, but the front piece does telescope into the cylinder. I’m not sure if that’s something new seen in the new movie, but it does feel a tad gimmicky. It’s also kind of cheap that it extends with a push of a lever, but has to be retracted manually. I probably wouldn’t mind it so much if mine actually worked and I could see some of the light show on display in that part of the Wand. 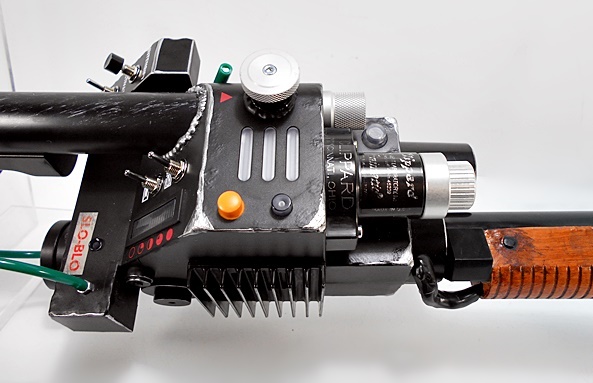 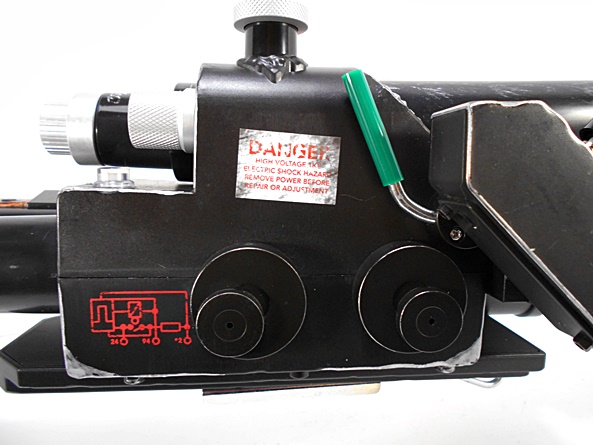 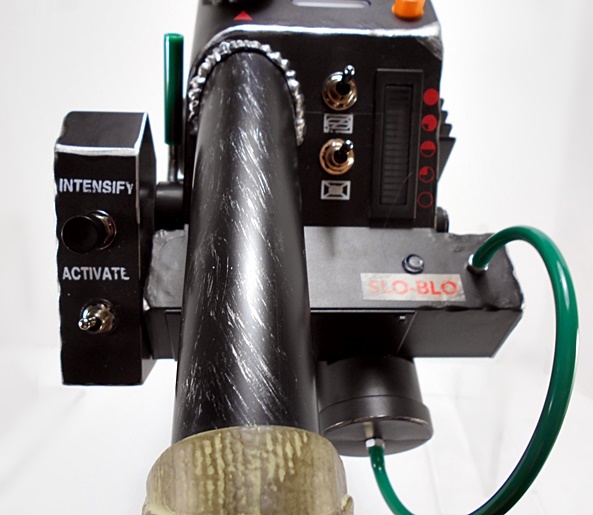 The details on display here make this a real work of art. It does indeed look like it’s been cobbled together from old pieces of lab equipment. There are abrasions on the black paint, and some parts even have traces of the original manufacturers etched into them. In some areas the black paint looks like it’s bubbled up in from overheating, the edges are all rubbed down to what is supposed to be the bare metal, the knobs are textured for grip, intentionally sloppy weld marks can be seen where other pieces were joined together. The tubes and wires look convincing, there are warning labels, and best of all, the toggle switches feel great and feature a satisfying snap when you flick them. They feel as authentic as everything else looks. I can imagine it’s pretty damn satisfying to flick them and have this thing come alive as a result, but right now I can only dream.

Even the bottom of the Wand, which I expected to see littered with Hasbro’s licensing shit and legalese and an obvious battery cover, doesn’t break the fourth wall of this prop-toy. On the contrary, it has a metal guide for sliding it onto the Proton Pack, and a hook to hang it on the belt with a carabiner clip. The battery pack is actually a rod that slides into the handle and is completely hidden thanks to some clever design.

The fake gaffer tape that’s wrapped around the barrel is probably the biggest drawback to the piece, as it’s clearly molded plastic, although it does a fair job of trying to look convincing. I suppose if you wanted to you could wrap it in real tape. The forearm grip, on the other hand, is also plastic rather than real wood, but between the excellent sculpt, paint, and weathering, it sure looks real wood that has maybe been coated in lacquer. A couple of the orange buttons look a little cheap and out of place, but I’m really reaching for things to complain about.

And that’s as far as I can take this review. I tried two sets of brand new batteries and got absolutely nothing out of the toy either time. No lights, no sounds, it was just dead. I even watched some videos to see if I was doing something wrong, because the one small folded sheet of multi-lingual instructions that came with it are pretty piss-poor for such a pricey collectible. But nope. This thing was sadly dead on arrival. I was hoping to exchange it with the retailer, but they promptly informed me that they sold out. After a lot of bother, I was finally given the option of keeping it for a $30 credit (It cost $110) or returning it for a refund. I opted to return it. If it shows up again for sale at the same price, I may very well try my luck again. Hell, if they had offered me half off I might have kept it. It really does look that nice. But I feel like every time I looked at it, I would be annoyed at the fact that it doesn’t work. Hopefully, my problems were isolated ones. It would be a shame if Hasbro went through all the trouble to make this look so nice only to have widespread problems with the electronics.