Hasbro is continuing to pepper us with releases in their Marvel Legends Deluxe Riders series. These pair Legends figures with modest-sized vehicles (in most cases motorcycles or scooters) and they’ve even used this price point to get us Professor X in his wheelchair. With display space always at a premium, I haven’t been all in on these, but there have been some that I simply cannot resist. And yup, Frank Castle and his Hog was one of those cases. The Punisher first debuted in the modern Legends line way back in 2012, sharing a “Marvel Knights” slot with a Blade figure, which I don’t believe was ever released. We later got the Netflix version of Castle, and a retro-carded release, the later of which I never got around to reviewing. Oh yeah, last year we got Frank Castle in The War Machine Armor as well! So, it’s not like he hasn’t had his share of releases, but I still feel like it was time for a new one.

I don’t have much to say about the packaging, other than it consists of an elongated window box that gives you a great look at the contents. There’s just some minor assembly required, as you have to pop on the handlebars. You get The Punisher logo on the front and a shot of the toy in action on the back. It is collector friendly, which is always nice if you want to keep it, but as for me… this baby is about to get shredded. Let’s start with the figure!

If you’re looking for a nice, basic, no-frills Punisher, you’ve come to the right place. Frank sports a pair of textured black pants, and a black T-shirt with his iconic emblem emblazoned on the front. There’s a shoulder rig and a thigh strap with magazines, both sculpted separately in soft black plastic. The vigilante ensemble is rounded out by the sculpted finger-less gloves on his hands and a a pair of black shit-kicker boots. There’s nothing outrageous about the sculpting here, but sometimes simplicity gets the job done, and I think that’s certainly the case here. Articulation holds no surprises, and since I have a motorcycle to look at, I’ll skip running through all the points.

You get two portraits with the figure, and they’re both excellent. He comes out of the box with the beat-up head. Gritting his teeth with vengeful rage, this Castle has seen better days. He’s got several cuts being held together by bandages, each featuring some wonderful detail. The sheer will and determination on this particular portrait is absolutely fantastic and it suits the character so well. It’s just another example of Hasbro killing it with their Legends head sculpts, and while it uses paint instead of the half-tone printing for the facial details, everything is still nice and sharp.

The alternate head is decidedly less beat-up, but still as determined as ever to kick ass. Hasbro really made it tough this time to decide which head to display on the figure, as they are both so damn good. As much as I dig the extra work on the beat-up head, there’s something about the way they did his mouth here that is amazingly expressive. Both heads also have a touch of pink around the eyes, and with the bandage missing, I can really appreciate the structure of the nose here, which clearly looks like it’s been broken countless times. 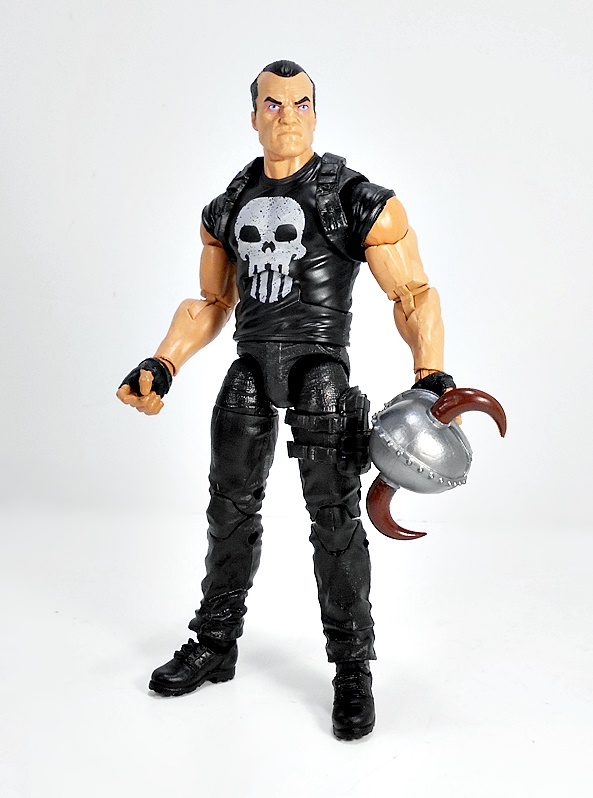 And finally, you also get Frank’s Viking-style helmet from the recent Punisher Kill Krew. I’ll confess that I haven’t read this series because, well it’s a Marvel Comic in 2019, how good could it be? But I’ll tell ya the cover art of #1, which I believe was the work of Tony Moore, made me stop and take notice. It looks so unbelievably out of place for a modern Marvel Comic, and by that it means it looks pretty damn fantastic. Like a throwback to better days. I can’t imagine how Frank Castle is depicted in this age of touchy-feely Marvel garbage, but I’m tempted to subject myself to it just out of morbid curiosity. In any event, the helmet looks great and can be worn over either head. Personally, I think it could have used some weathering, but I like the finish a lot.

Frank also comes with a bunch of tools of his trade, and I’ll just knock these out in no particular order. When it comes to making a statement, there’s nothing like tuning someone up Sammy Sosa style with some ballpark lumber. This bat is pretty simple and cast in a very pale cream-colored plastic. Like the helmet, this accessory looks way too fresh and new for my tastes. I would have loved to see it worn and splintered. Maybe some gaffer tape around the grip. A little crimson staining, and hell while you’re at it sculpt a tooth embedded into it. OK, that last suggestion is probably a bit much for an action figure sold at Target, but it would have been damn cool to see.

What’s that? You say you want to hit and cut people at the same time? Well, son, then you need a machete! Like the bat, this is accessory is nothing special, but I’m not going to say no to a machete. It’s got a brown grip and a silver blade and it looks way too clean to have been in Frank’s possession for too long. Maybe he just bought it after his old one broke. 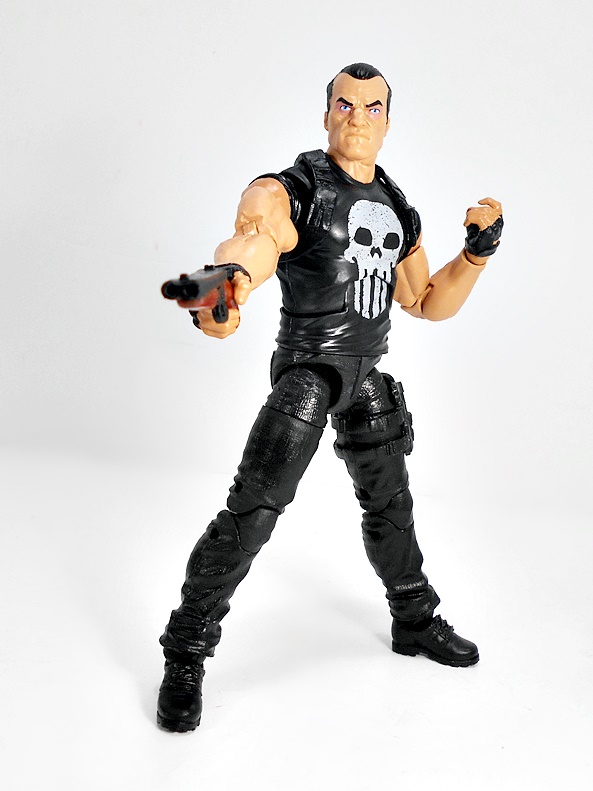 Sometimes people run, and you don’t want to have to chase after them with a melee weapon. And that brings us to the pew-pews. First up we have this awesome pistol-gripped double-barreled shotgun. A holster on his back for this thing would have been cool, but I’ll surely take it anyway. 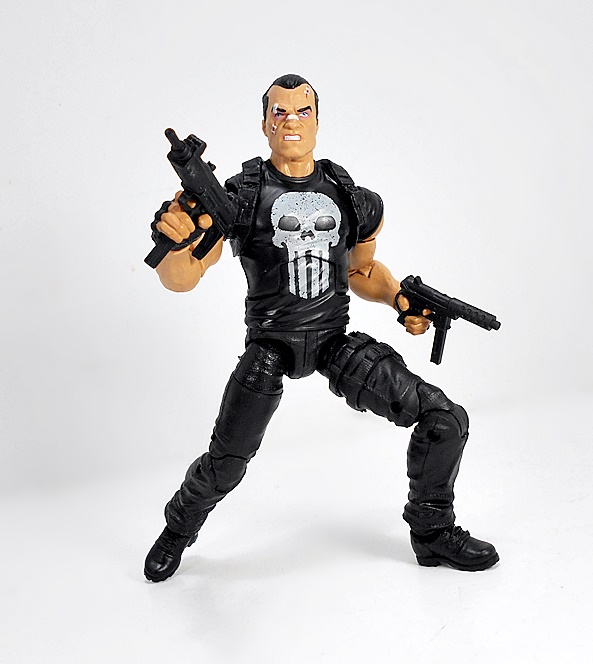 And Frank’s arsenal is rounded out with a pair of sub-machine guns. The first is an absolutely beautiful example of the iconic Israeli Uzi from Uziel Gal. I think this is the best example I have of this weapon in this scale, and Frank may have to give this one up to my GI JOE Classified Snake Eyes.  The sculpted detail on this piece is exquisite and it’s definitely a great reason for picking up this figure. I believe the other gun is a TEC-9, which I can recognize, but I’m less familiar with. Not that it diminishes the fact that it’s a great looking weapon. Because he’s The Punisher, both left and right hands are sculpted with trigger fingers so he can dual wield with ease.

And that brings us to the motorcycle! Now, as I mentioned earlier, I’ve skipped a few of the previous motorcycle releases, particularly the one with Wolverine, so I’m not sure if this is new or a repack, but either way it’s a great looking bike! If you’re looking for flashy colors and lots of paint applications, look elsewhere, because this thing is blacker than the dark pit where the last vestiges of Frank Castle’s mercy hides. There are, however, a few minor flourishes of red, as well as a customized license plate, which reads PNSH-616. It makes me laugh to think Castle actually went into the New York City DMV and applied for that plate. The clear plastic headlamp on the front looks great and there’s a small Punisher emblem in the speedometer, personalizing the middle of the handlebars. There’s plenty of detail in the engine, the wheels roll well, and thanks to the flip down kickstand, Castle can be displayed riding it without worrying about it toppling over. What’s more he fits on it perfectly and his gun hands grip the handlebars and stay put. I think my only nitpick here is I would have liked a bracket or scabbard for him to be able to store some of his weapons. 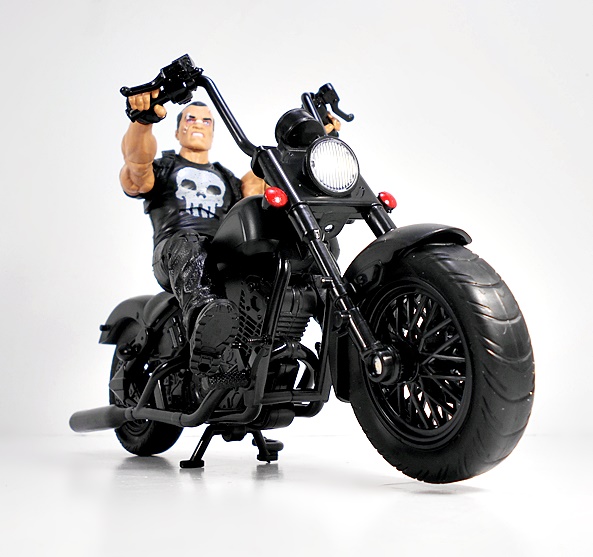 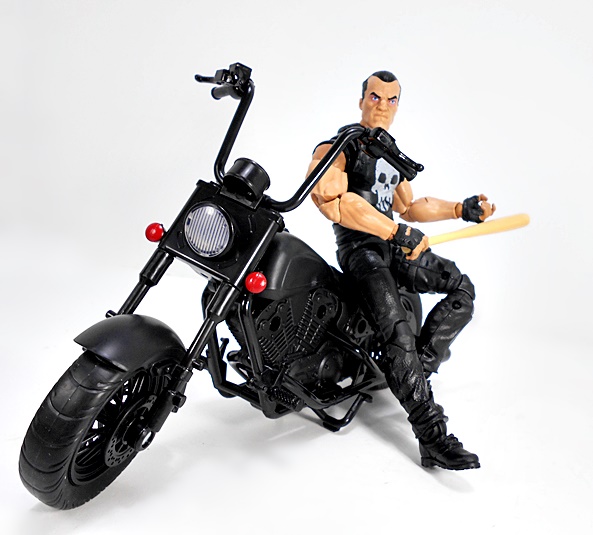 I’m happy to see that Hasbro is keeping this Deluxe Riders assortment around. I’ll admit that the line is in danger of causing motorcycle fatigue, but it’s hard to deny that are extremely fun packs. This figure happens to be my favorite release of Castle in the modern line so far, and when you throw him on this bitchin’ chopper, it just sweetens the pot all the more. Not to mention the bevy of weapons, an extra head and a helmet too! I want to say I paid around $35 for all these goodies, and it was well worth the price of admission. Not to mention that this bike can probably be repurposed for any number of other 6-inch figure lines, even with the personal flourishes.