A couple of weeks back I embarked on my first look at Hasbro’s series of non-transforming Transformers with Optimus Prime. Overall, I liked the figure well enough, but ultimately I felt that it didn’t really do anything better than the excellent Earthrise figure that could actually transform. Well, today I’m back to give this series a second look with the mighty Megatron!

Here’s a quick look at the packaging, which I like very much indeed. As a window box, it’s not too far off from the current Transformers Deluxe packages, but the deco is a lot brighter and red, which is an on-the-nose nod to the abbreviation of the series name. Whoever has been doing the artwork for Hasbro has been killing it lately, and that goes double for this series, as you get some lovely character art that wraps from the angled side panel to the front of the box. So, if you missed out last tine, these are roughly six-inch figures with some accessories that claim to emphasize articulation and style over the ability to convert. Well, let’s get Megsy out and see what we’ve got! 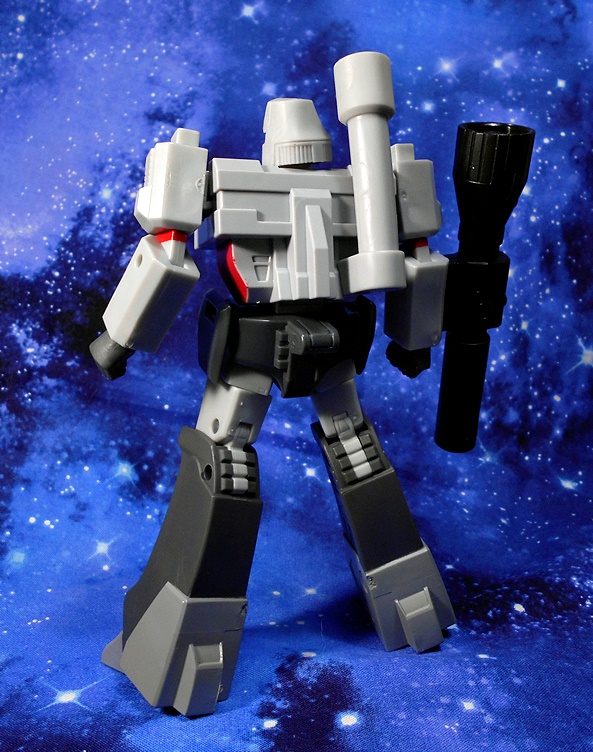 Straightaway, I like this figure a lot more than I did Prime. It should be said that Optimus Prime’s robot mode doesn’t lose a lot to his transformation. Hell, the original G1 toy was well-proportioned and looked close enough to his cartoon and comic counterparts. Megatron, on the other hand, isn’t so lucky. His G1 mode was an abomination and while subsequent tank modes have been made to work fairly closely with his G1 robot aesthetic, he stands to benefit a lot from this whole non transforming treatment. And benefit he does indeed! What we’ve got here is as  stylish a G1 Megatron figure as we’re likely to see and we owe that to kicking the need for all that transforming engineering. Megatron is one clean-looking robot, with no unsightly kibble, other than the gun barrel peaking up over his shoulder, which has since become an iconic part of his design even in the cartoons and comics. Everything about this bot is beautifully proportioned, and there are no hollow or unfinished areas to be seen from any angle. The figure mostly makes use of colored plastic for its rather limited eco of white, gray, and black. You do, however, get a little more color in the control box under his chest, some red in his elbow joints, and the Decepticon emblem on his chest. 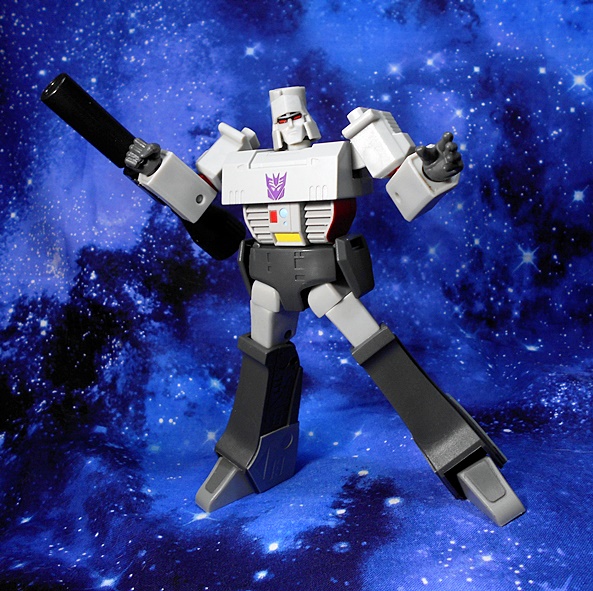 As with Prime, the plastic here has a very dense and chunky feel to it, which makes for an overall soft sculpt. Given that these are simpler animated style figures, that isn’t a problem when it comes to the detail. On the other hand, this plastic does show a few blemishes, which I’m not used to seeing on official Hasbro product. Either way, the plastic makes for a hefty figure that’s fun to pick up and play with and seems like it would be pretty durable under rough play. Prime’s deco felt a little wanting, missing a few key paint hits, but it’s admittedly more complex than what was required for Megatron’s, which looks fantastic.

If there’s one place that the softer plastic detracts from the figure it’s in the head sculpt. Make no mistake, what we got here isn’t at all bad. The portrait captures the Megatron I know and love from the Sunbow cartoon quite well. You get his iconic “helmet” and his smug, slightly downturned mouth. The red eyes are outlined in black, and those triangular “eyebrows” can be seen peaking out from under that “helmet.” No, my one nitpick here is that I wish the facial details were a little sharper.

The fusion cannon often suffers from transformation engineering, sometimes being too small or too big, or just weirdly shaped. Here, it looks great in terms of size and shape. Alas, some of those weird imperfections in the plastic are evident on the barrel of mine. It mostly looks bad when it catches the studio light and in hand under regular lighting it isn’t nearly as bad. Still, it’s bizarre to see a brand new toy with this kind of blemish. 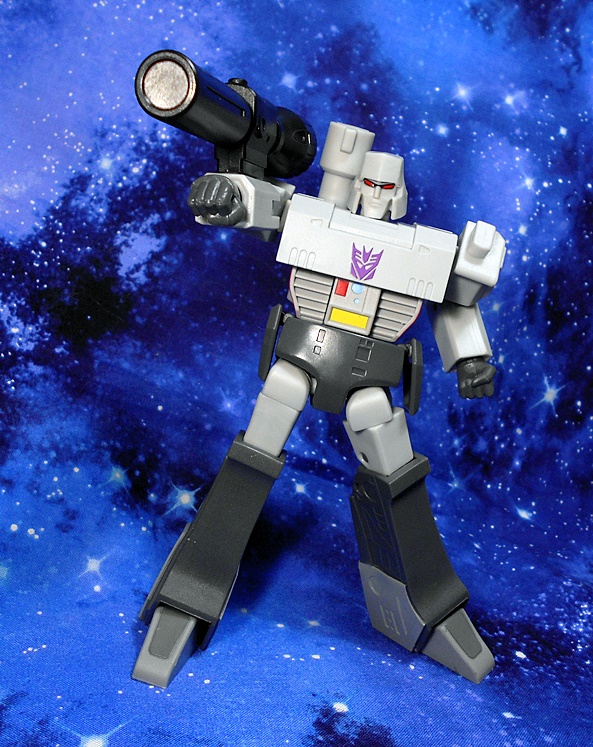 Moving on to articulation, I have to say that while Megatron here is definitely well articulated and lots of fun to pose and play with, it isn’t that great a leap over what we saw in the Siege figure. Indeed, one vexing thing about this figure is the way the shoulder joints don’t work all that well with the fusion cannon. He can aim it well straight in front of him, but it’s difficult to make him aim it off to the side and have it on top of his arm like he often does in the cartoon. Indeed, the Siege figure can actually strike that aiming pose a little better than this one can. 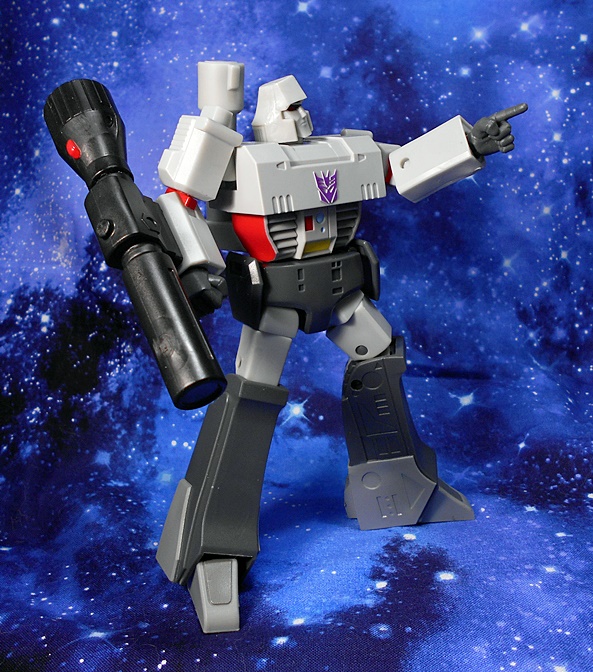 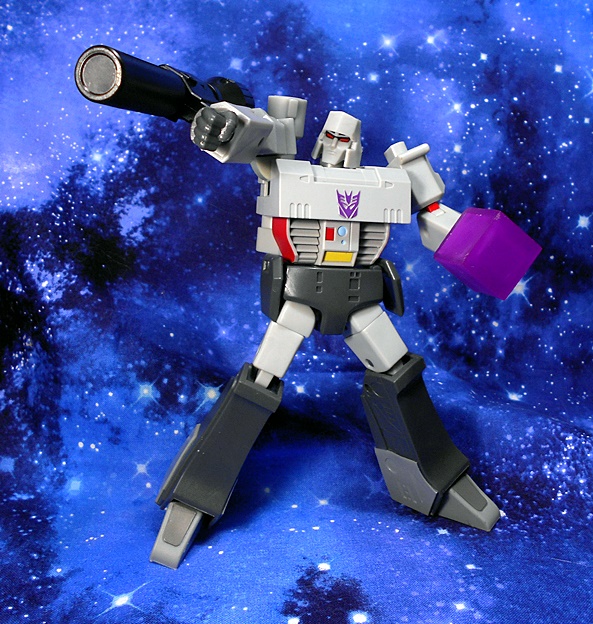 Megatron comes with a number of extra hands, mostly left ones. You get a fist, a relaxed hand, a pointing finger hand, and even a hand holding an Energon Cube, which is a great little extra.

And finally, Megatron comes with his purple Energon Mace, so you can recreate his battle with Prime on the Hoover Dam. Like Prime’s Energon Axe, this plugs into the wrist, replacing his hand. It’s got a pretty long chain to it and looks great.

Ultimately, I like this figure a lot, even if it is far from perfect. I’ve long been on the look out for a Megatron figure that’s faithful to his stylized G1 look and this one fits the bill. I don’t think this figure offers enough improvements in articulation over the transforming Siege figure, it does deliver a cleaner and more traditional looking version of the character and that fits the bill quite nicely. As a result, I think this one succeeds a bit more than the Prime figure, but in the end I like them both well enough to be happy to have them in my collection. We’ve got one more to look at in this initial assortment, and that’s Soundwave. Hopefully I’ll have a review of him ready in the near future!