ARE YOU SICK OF DEADPOOL YET??? That’s a question Hasbro seems to be screaming at us these days with every few waves of Marvel Legends. But, I guess someone had to take over for the crazy number of variant releases of Iron Mans and Captain Americas that we used to get. We’ve already seen one version of Poolsy in his so-called X-Men outfit and now we’re getting him in the more traditional (and less on the nose) look with the blue and yellow deco. It may not be as cool as Pirate Deadpool or as wacky as Underpants Deadpool, but I was actually happy to see this one get released. What can I say? I’m part of the problem! At least I never bought that Rainbow Deadpool 5-pack. And I’ve seen that clearanced down to like ten bucks.

Hey, you got your Deadpool in my X-Men wave! Yup, this assortment feels like Hasbro didn’t have anywhere to go with some of these Deadpool figures so they stuffed them into what could have been a full X-Men wave. But hey, they could have just as easily made it a full Deadpool wave too, so count your blessings, you Deadpool haters! Anyway, there’s nothing new to say about the packaging, so let’s press on. 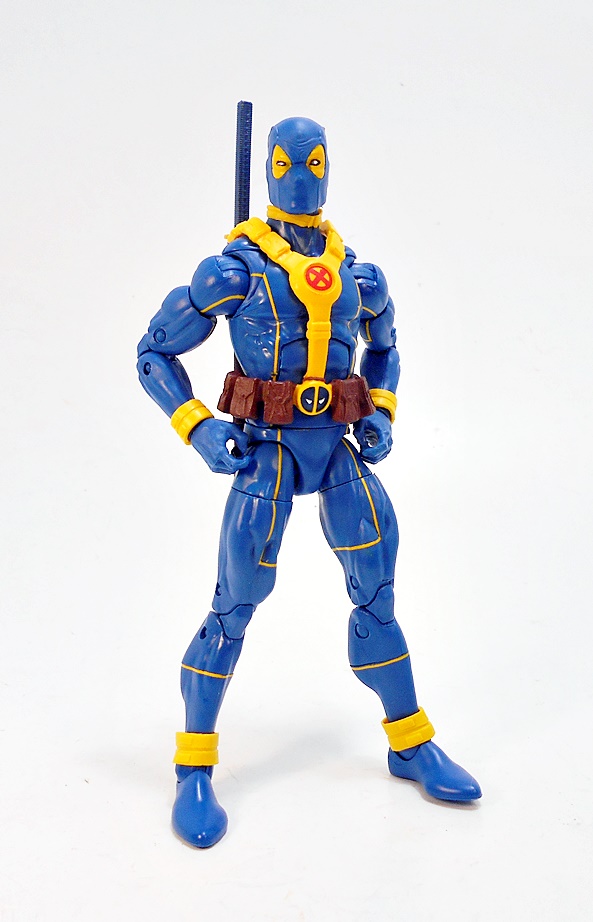 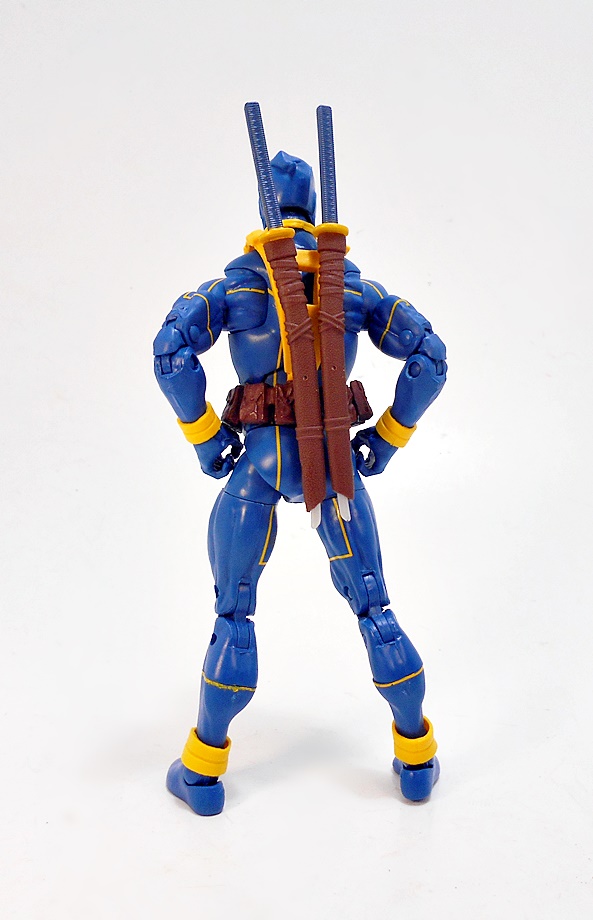 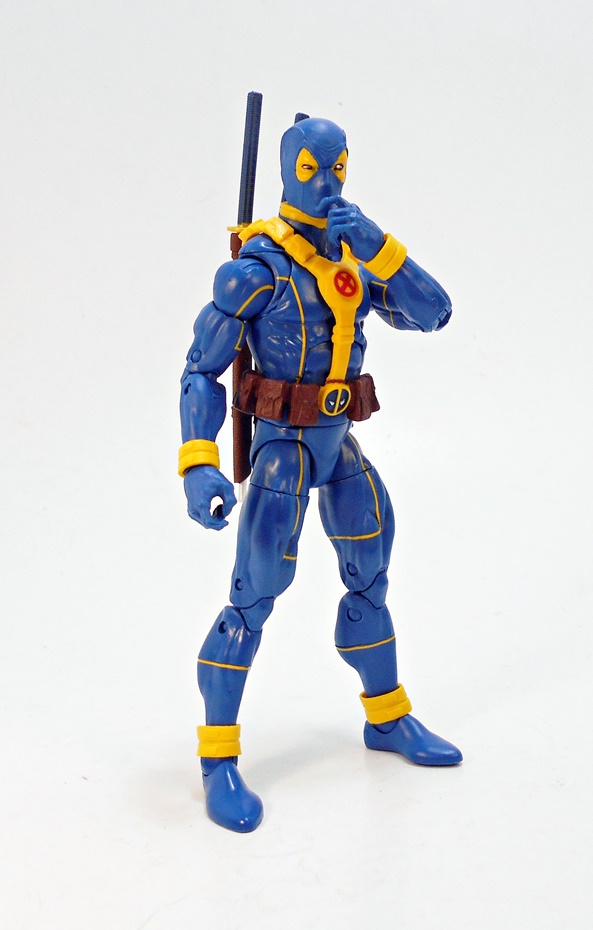 As you might expect, El-Poolio here is kit-bashed from a bunch of past Deadpools. The body appears to be borrowed from the Wade we got a couple years back in the Sasquatch Wave, which was also used for the above cited X-Men Deadpool. And that’s not a bad thing, because it sees a return of those wonderful lateral crunches in the shoulders and the extra set of swivels in the lower legs. In terms of articulation, this body is just a wonder to play around with and even has a pretty nice balance. Also borrowed from that earlier Deadpool are the wrist and ankle cuffs, now repainted yellow to match the new deco. And speaking do deco, I simply adore the colors that Mr. Pool is showcasing here. The bulk of the suit is blue, but has some nice yellow piping and it looks sharp! 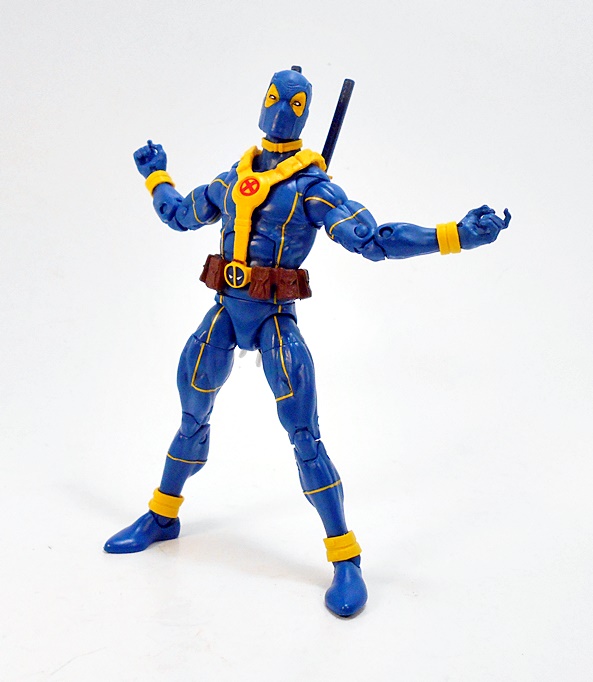 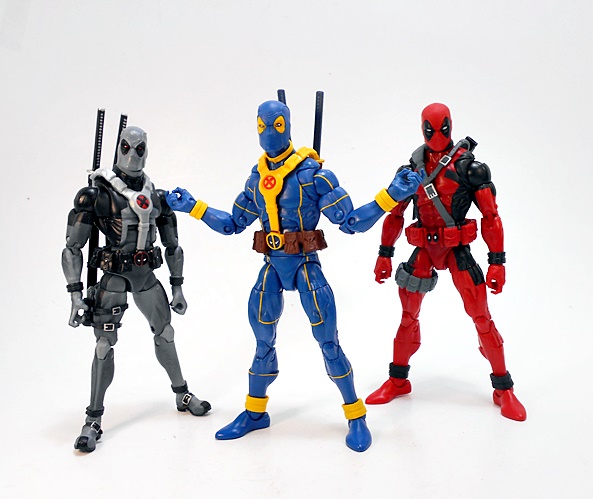 The belt and shoulder harness is borrowed from the Deadpool Corps Deluxe Riders Deadpool, which was in turn borrowed from the 2012 X-Force Deadpool. Yeah, I’m amazed that Hasbro is still digging that deep for parts and accessories. The panoply of pouches are brown, while the chest and shoulder straps are now yellow. He’s got a red X-logo in the center of the harness and his patented Pool-emblem on the lower belt buckle. It looks good on the figure, but the belt rides a little high, because the 2012 figure was a lot shorter. The last splash of yellow on the suit comes from his choker collar and the areas around his eyes on the mask. Roll it all together and this is a beautiful suit. 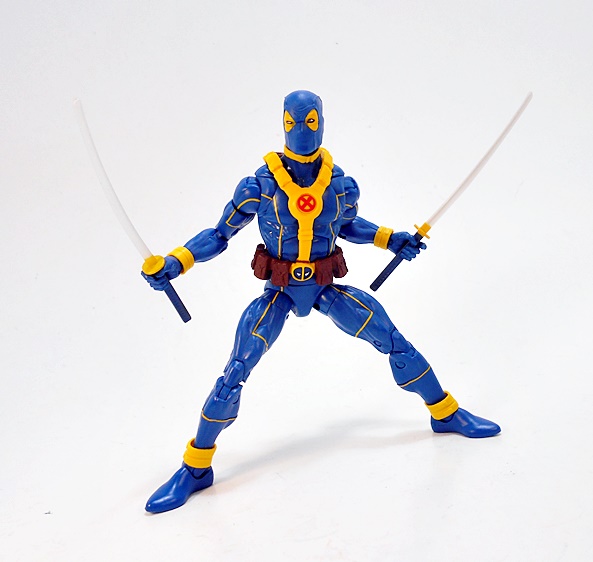 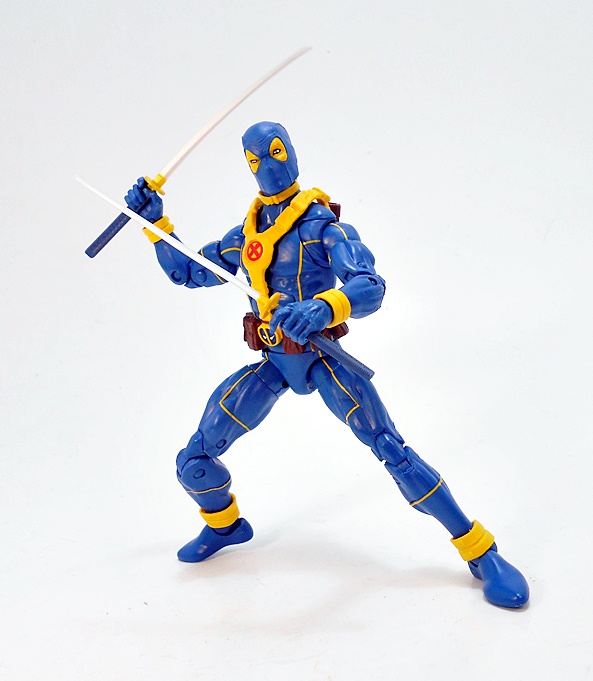 Because this figure borrowed the harness and scabbards, it’s only natural that the twin katanas are recycled too. Each hilt has been repainted with blue grips and a yellow tsuba to accessorize with the costume. Deadpool doesn’t like to be laughed at by the fashionistas. The blades are cast in that weird almost transparent white plastic, which I will likely wind up coloring in silver with a Sharpie or Gundam marker. All in all, these are some of the best swords we’ve seen with Deadpool, and I’m always happy to see them again. The only thing I don’t like about them is the way the tips of the blades peek through the scabbards. And while Pool only comes with a set of trigger hands, they hold the swords quite well. 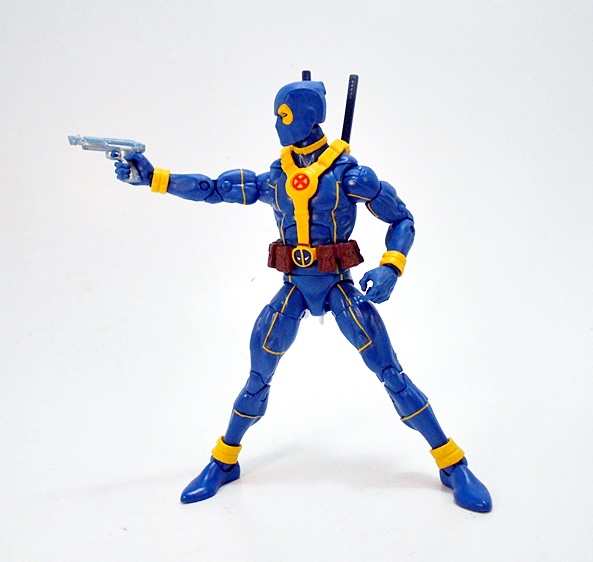 In addition to his cutlery, Deadpool also comes with a pair of guns, both of which are cast in pale silver-gray plastic. The pistol has a bit of a sci-fi vibe going for it, but it’s not too crazy. Sadly, there’s no holster on his belt for him to carry it, although I suppose you could just tuck it in there. 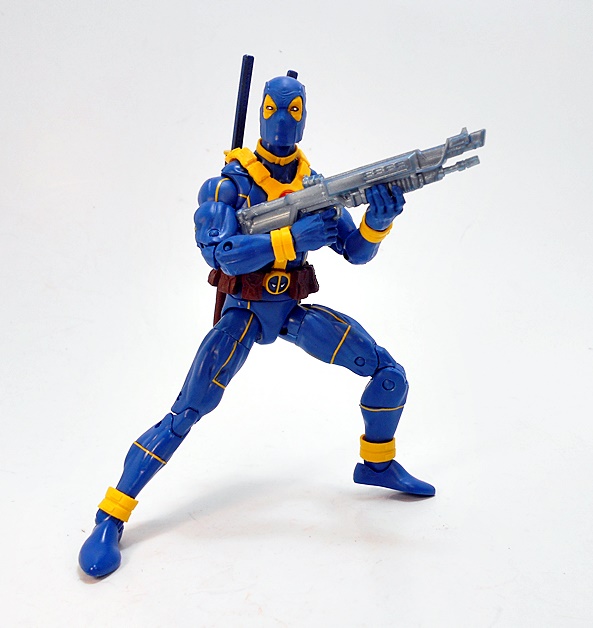 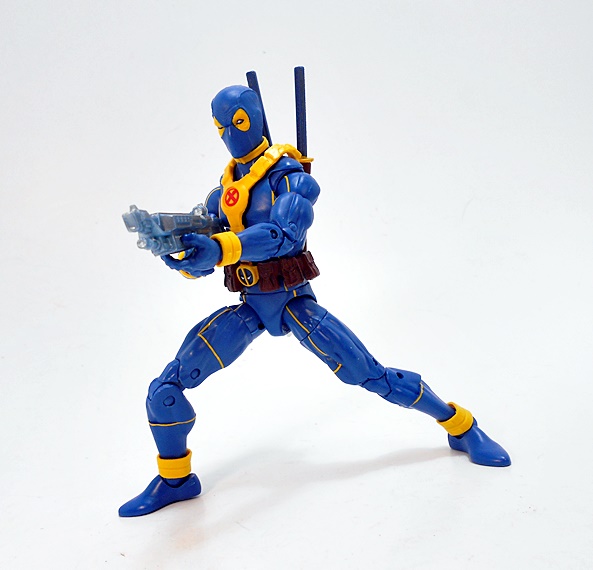 The second is this decent sized assault rifle, which again is a little bit out there in its design, but still looks like it could be a credible real-world weapon, I suppose. I’m fairly sure we’ve seen these guns somewhere before, but I can’t readily place them. And as much as I love you guys, I’m not going to go picking through 300 or so Legends weapons to find matches! 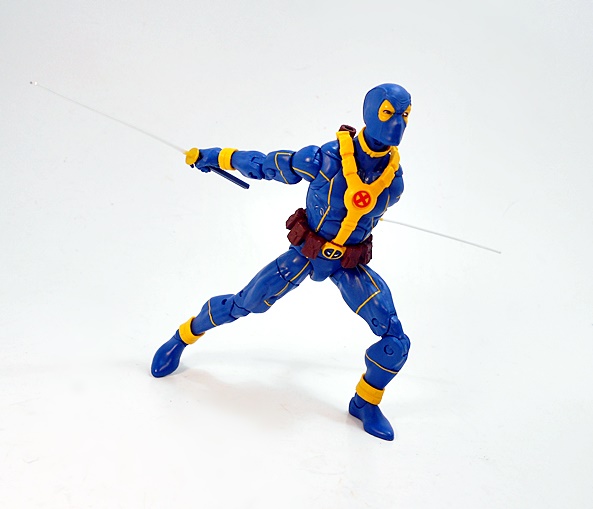 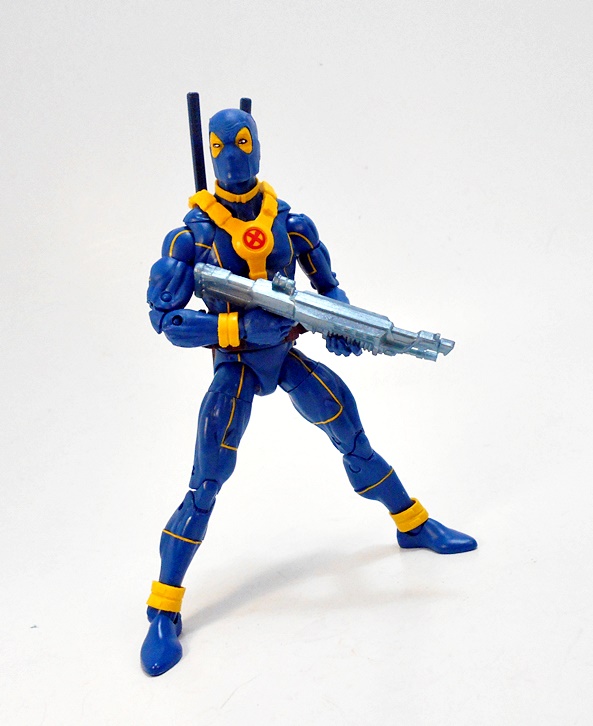 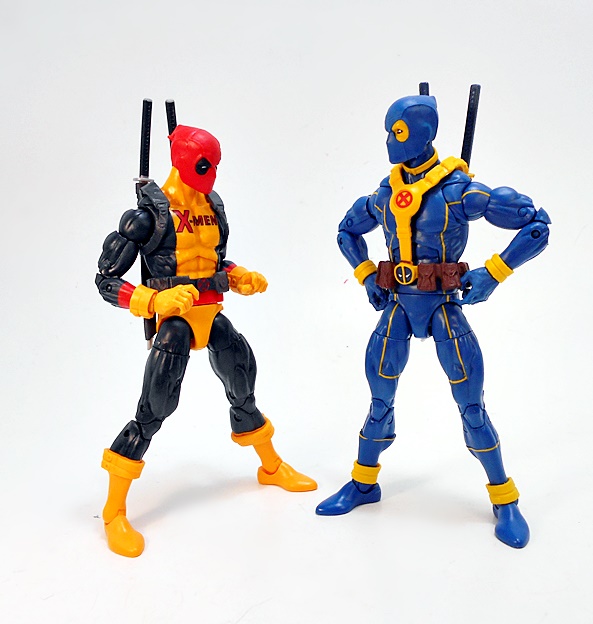 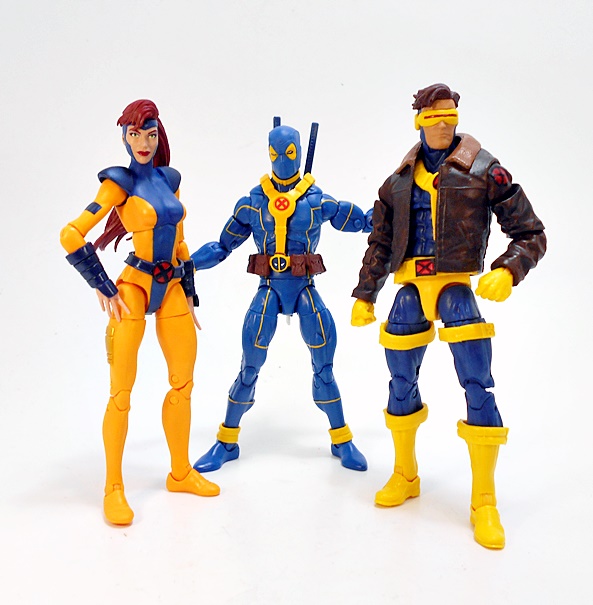 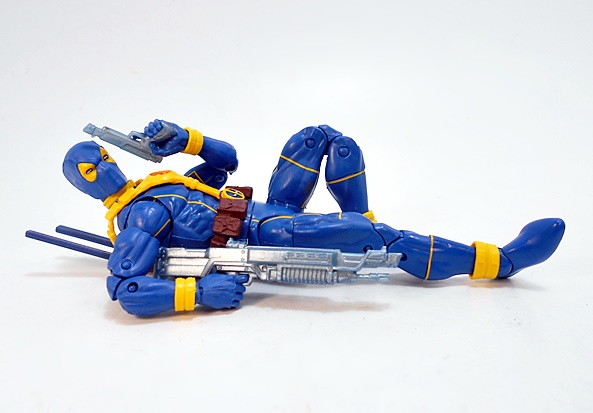 Another Deadpool or no, I think this is a great looking figure. Normally, I’d say that if you’re sick of Deadpool just don’t buy him. But if you take that advice you’ll have a headless Strong Guy in your display, so I guess you’re kind of stuck. And maybe that’s a legit complaint about all these Deadpoolses we’ve been getting. Then again, having to buy a figure you don’t really want every now and then is one of the pitfalls of Build-A-Figures. That’s why Hasbro does it! Personally, I’m OK if we take a break from Deadpool himself for a little while, but there are still some associated characters I’d like to see hit the pegs. Once again, Hasbro, where the hell is my T-Ray?