Well, last week turned out to be a bust with me being too busy to get back here again with more content after Marvel Monday. But it’s a new week, and that means new opportunities to carve out some time and get some more reviews done. As promised, I’m back for this Marvel Monday to wrap up the Strong Guy Wave with the titular Build-A-Figure himself. Let’s plunge into some more X-Factor love and check out Guido! 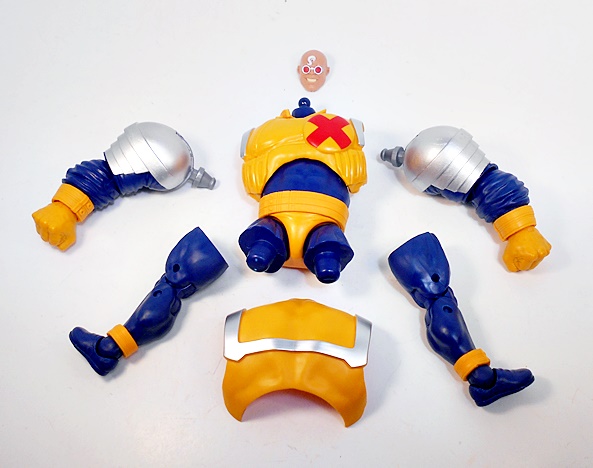 There were seven figures in this wave, and since your average BAF only requires six pieces, that means one figure often ships without a part. However, in this case everyone brought something to the party! The extra piece comes from Strong Guy’s massive torso requiring a back piece. So no skipping out on figures here, you have to buy those Deadpools. YOU HAVE TO!!! Still, there’s nothing tricky about hammering this guy together and all the connection points fit well and are super sturdy. And that wasn’t a problem for me, because not only did I love every figure in this wave, but I’ve been hotly anticipating getting Strong Guy into my collection for a while now. And man, he does not disappoint! 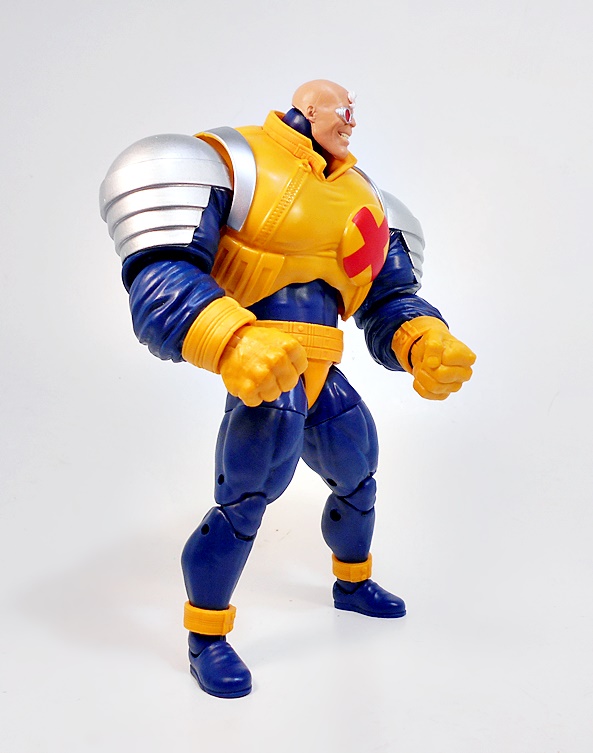 Guido sports an appropriately disproportionate body, which is seriously pumped on the top half, like we’re talking Juggernaut levels of pumpitude, and relatively normal sized legs with tiny feet. Yeah, he’s freakish looking, but I’m not about to call him out on it! Much of the body is painted blue to depict an under suit, with the massive yellow vest making up his upper torso, complete with a giant X-Force disk on the left side of his chest, a sculpted zipper running across the right side of his chest, and a slightly popped collar. His already massive shoulders are further reinforced by segmented silver armor plates, perfect for taking down walls or tackling foes into oblivion. More yellow is added to the mix in the form of his belt and X-Undies, his massive gauntlets, and dainty ankle cuffs. Actually, they’re normal-sized, but they look dainty on him. Hasbro did an absolutely splendid job on the costume here! He carries just enough sculpted detail to give him that singular cartoony look, and that eye-pleasing one-two punch of deep blue and vibrant yellow never goes out of style!

As for Guido’s tiny head, well Hasbro probably didn’t have a lot of trouble packing this portrait with personality, thanks to Strong Guy’s distinctive mug. His bald pate is punctuated with a little curl of white hair sprouting right in the middle of his head. His pince-nez goggles are painted silver with the lenses painted in red matte, and his beaming smile advertises a full boat of slightly yellowed teeth. A prominent, dimpled chin and pair of tiny ears rounds out Guido’s melon quite nicely. This is a great head sculpt and it makes me smile every time I look at it. 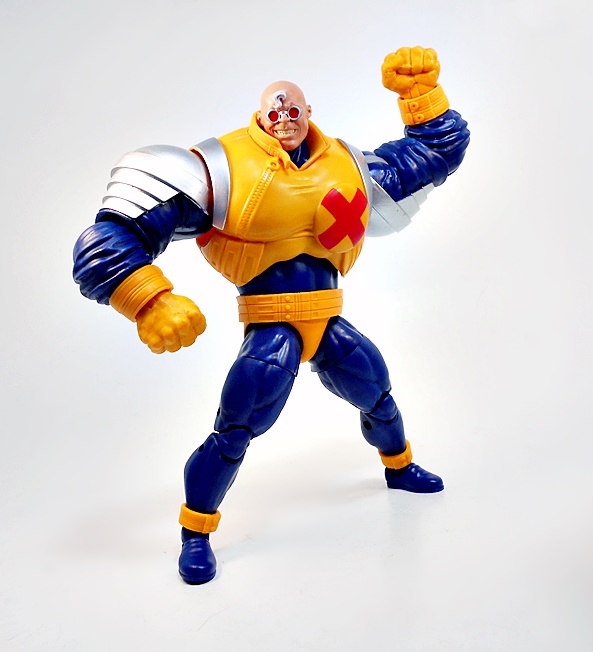 Despite his wonky proportions, Strong Guy manages to pack in all the usual points of articulation I’m used to seeing in these Build-A-Figures. The massive arms have rotating hinges in his shoulders, elbows, and wrists. His legs have ball joints up in the hips, swivels in the thighs, double-hinges in the knees, and both hinges and lateral rockers in the ankles. His upper chest is set on a ball joint, as is his neck. While I knew this guy was going to be fun to play around with, I had expected high levels of frustration getting him to stand, but much to my surprise, them little feets support his upper bulk quite well. Indeed, there were only a few poses where I had a tough time getting him to stand. Not bad for what should be such an obviously unbalanced figure. 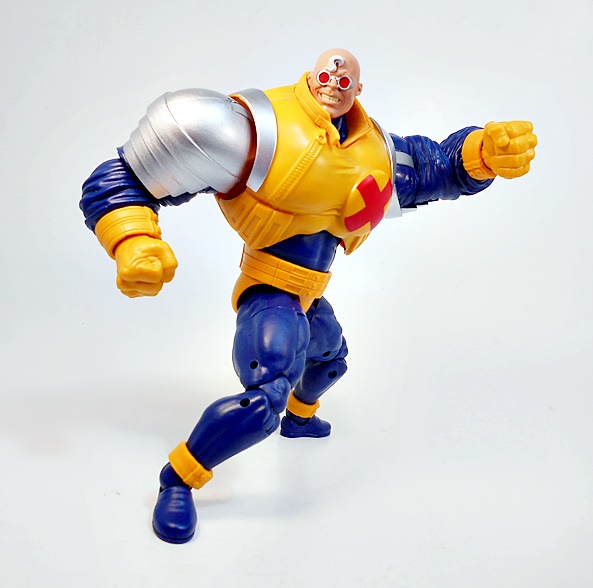 Strong Guy was a perfect fit for the Build-A-Figure treatment, and even as a hotly anticipated character of mine, he does not disappoint. This is what BAFs are all about… big, beefy hunks of plastic that simply wouldn’t work in a single Legends package unless released as some kind of Deluxe. Even when displayed at the back of an X-Men shelf, amidst a sea of blue and yellow uniforms, Strong Guy stands out. He’s simply a fun and wildly creative design that makes for a perfect action figure. I suspect he’s going to be my desk buddy for a while before he joins his friends.

And that’s finally another Wave of Marvel Legends in the bag, and a mighty solid assortment at that. With some great character additions including Maverick, Tom Cassidy, Sunspot, and wait… Thunderbird??? Awwww SHIT! If only I had put Warpath in that group shot instead of grabbing his brother Thunderbird by mistake. What can I say, other than it’s been a long working weekend, and I was too tired to dig out all the figures and do a re-shoot. And for the record, that’s twice in one review, because I meant to have Forge in that other group shot, but grabbed Bishop instead. Sheesh, I’m clearly getting out of practice. Anywho… Shiklah certainly wasn’t on my short list, or my long list for that matter, but she’s such a great looking figure, who cares! Pirate Deadpool is fun, and while I didn’t think I was going to care at all about Deadpool in his X-Men colors, truth be told I think that figure turned out great and I dig it quite a bit. Since I’m between Waves now, next week I’m free to review whatever I want. And since I opened them for a shot in this review, I do believe I’ll be checking out the Havok and Polaris two-pack.