Well, Toyhounds, I had a really shitty day today and the only thing getting me through it was knowing that I had a package waiting for me at home with a brand new One Piece statue of Nami. Mmm… Nami. She could gum gum my rubber person anyday. Yes, I’m a feller who does indeed enjoy his One Piece and I’ve been rewatching the series in looong marathon sessions with lots of alcohol. This is a ritualistic endurance practice that I do not recommend for the weak-minded as it could result in madness, but in truth I can only watch One Piece when thoroughly inebriated. Anyway, so after my horrid day, I got home, poured myself a nice Scotch, and opened up my box only to find out that my Nami was indeed a piece of shit knock-off. I’m not going to waste a lot of time on this disappointment, but let’s take a look at her anyway. 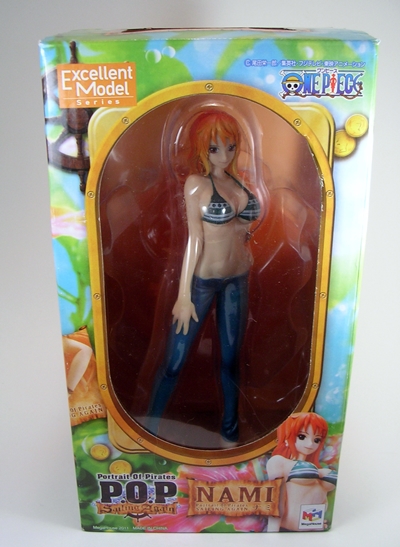 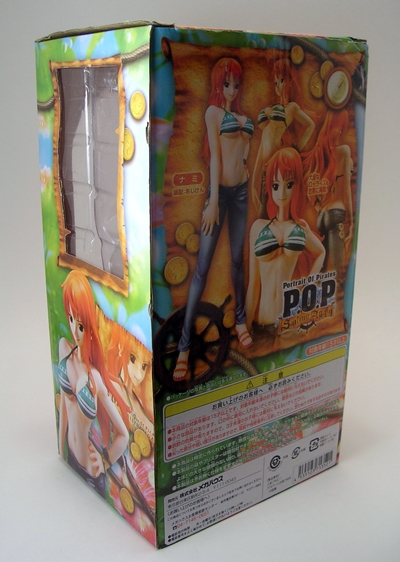 And there she is in her window box. The deco consists mostly of different shots of the statue and a colorful background that suits the anime source material. This one was a little shopworn, but it was still sealed, so there wasn’t anything to really worry me. The box actually appears to be the spitting image of the official product package, but naturally, the text is all Japanese and it could very well say, “Ha Ha… You paid for a bootleg, stupid!” Inside the box Nami comes between two plastic trays with the stand behind one of them. 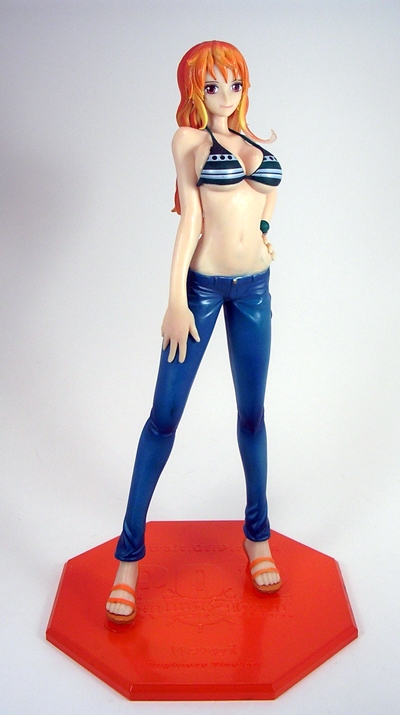 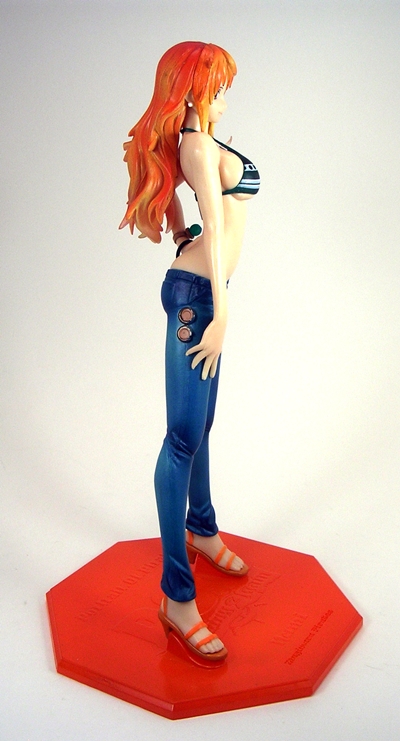 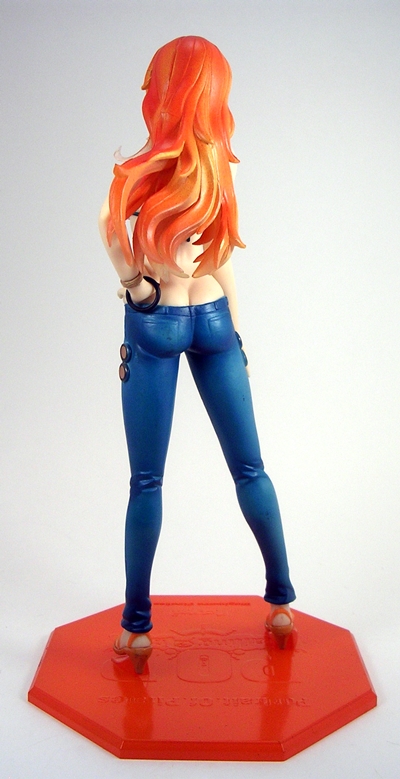 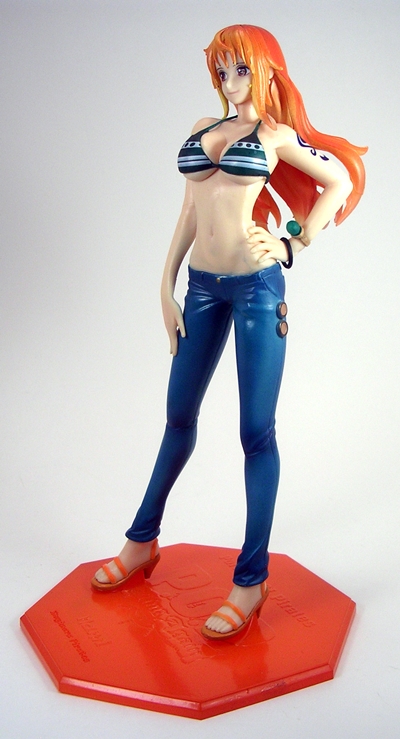 So, the moment I had her out of the box, I knew something was amiss because the statue looks like poop and Megahouse does not make poop. There are various scratches and imperfections on her skin and the paint on her bikini top is faded. At first, I thought it might have just been a badly used piece that was being sold as new, but it didn’t take long to realize that wasn’t the kind of swindle I had been subjected to. The paint is horrendous. There’s all sorts of paint slop between her skin and her jeans and her hair is a gloppy mess. Even on a bad day, Megahouse wouldn’t let anything nearly this bad get through their quality control. The skin is also waxier than it should be. Seriously, parts of this statue literally look like they’re sculpted out of candle wax. The eye coloring is also totally wrong.  The other, and more definitive, tell-tale sign is that the bangle on her left wrist is black instead of a coppery, bronze. The base is another great indicator of bootleggery too, as if you hold it up to the light you can literally see right through it. It’s also made of such flimsy plastic that it can barely hold her up, even though it’s absolutely huge. 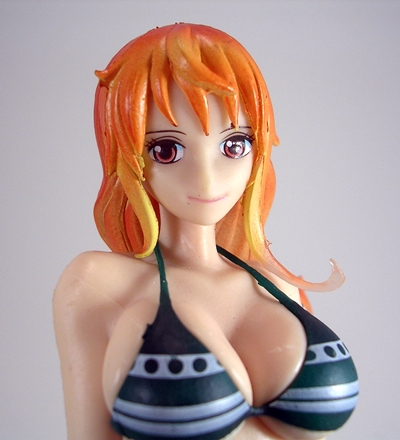 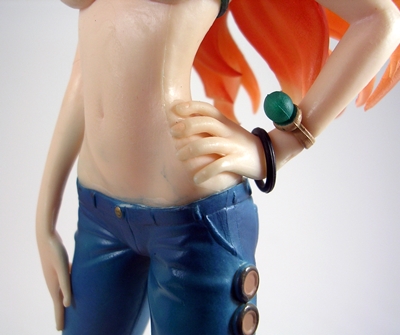 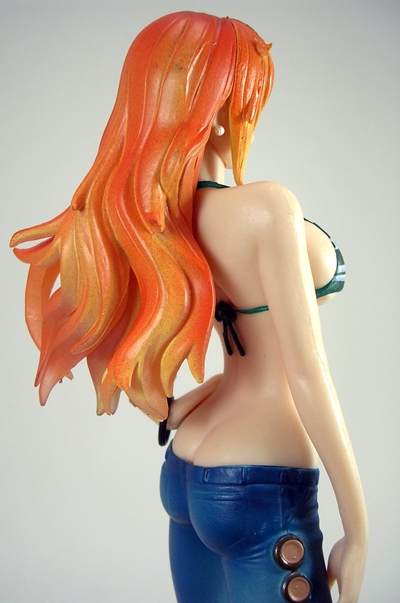 And so, I came to the table today hoping to share my Nami love through a beautiful statue and I had to do this disappointing feature instead. I got this piece of crap from a Marketplace seller on Amazon and as soon as I was done shooting her for this feature, she went right back into the box and is getting shipped back for a full refund. It’s sad and surprising to know that Amazon is participating in the sale of bootlegs, as this one was actually marked as “fullfilled by Amazon.” The shame of it is, I would have gladly picked this one up from one of my regular and more reliable sources, but nobody else has her in stock anymore, leading me to trawl for her in the more unseamly back allies of Internet Nami Statue commerce. I’m still quite keen on getting the real thing, but I guess I’ll have to hunt her on Ebay and hope for a more honest seller.