Are you a Barry Allen whore? Do you need something to go with those Flash bedsheets and comforter and Central City themed wallpaper in your room? Is your army of Justice League Unlimited Flash figures just not cutting it? Well, here’s the item for you. While I was pretty much oblivious to Mattel’s Giants of Justice line of figures, I do remember shots of The Flash here circulating from the SDCC of twenty-ought-nine. I didn’t really pay it much mind though until it turned up on clearance at TRU for an irresistable $5.98. Seriously, a 1:6 scale Flash figure that was technically an SDCC exclusive? Why wouldn’t I buy that? Um, because you have no space for it. SHUT UP!!! 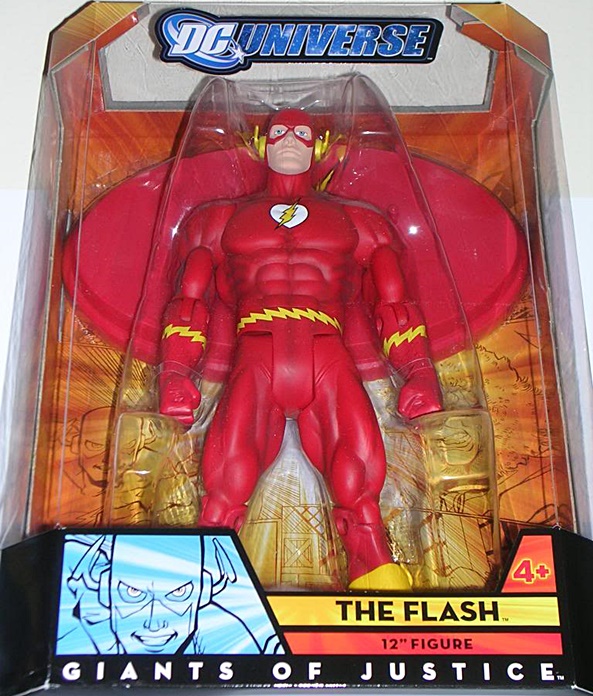 The packaging is a window box with the familiar DCUC deco. It’s very similar to the style Mattel uses for the DC Universe Classics 2-packs, only a lot bigger. It’s also sort of collector friendly. You can get the figure out just fine and return him to the package for display, but getting the display stand out is trickier since it’s sealed behind a bubble on the back of the cardboard insert. A little razor blade action can’t even help you, because the bubble is glued to the backdrop of the tray. I’m leaving mine alone because this figure will probably spend most of its time displayed in the box. The back panel has a nice little bio blurb. I mentioned earlier that this figure was technically an SDCC exclusive, but it’s worth noting that it doesn’t say it anywhere on the package.

In terms of sculpt, this isn’t bad, but it is pretty basic. The muscle tone is well done, particularly on the figure’s upper body. From the neck down, The Flash’s costume does’t require a lot of unique sculpting, apart from the sculpted wings on the boots and heavy treads on the soles. The hands are balled into fists, which works fine for running poses. The red suit features a decent paint wash that helps to pick out the detail in the muscles. The emblem on his chest is a tampo, which means it’s nice and crisp. The yellow used for the boots is particularly vibrant, although there’s a little slop around the tops.

The head sculpt is very basic, although probably roughly on par with the DC Universe Classics release. It just looks a lot simpler when it’s blown up to this scale. Again, not bad, but nothing spectacular. The mask is actually part of the sculpt and his ear wings look pretty good. 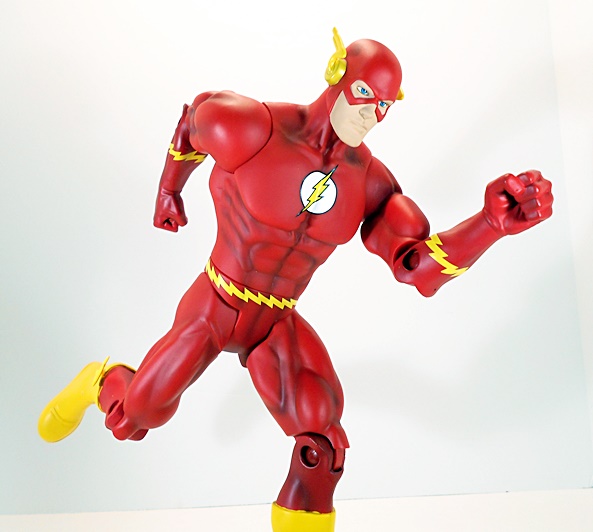 So how about that articulation? Well you’re getting considerably less than you are with a 6-inch DCUC figure. I suppose that’ll seem odd to some since a larger figure should warrant better articulation. Then again, considering that a lot of these larger pieces tend to be statues, you aren’t making out all that bad either. Flash’s head turns from side to side, his arms rotate at the shoulders and are hinged at the elbows. His legs rotate at the hips and are hinged at the knees. He also swivels at the waist and… that’s it.Yeah, the shoulders do look like ball joints, but they aren’t. You can still get him in a nice running pose with the help of the stand, but considering the size and original cost of this figure, I think most collectors were going to be expecting more.

I really dig The Flash, but it still feels like an oddity to have this one big lone Flash figure in my collection as a stand alone piece. I can’t emphasize enough that the main reason I bought this figure was just because it was dirt cheap and basically an impulse buy that I threw into my cart while buying a number of other figures. I know, that’s not a ringing endorsement for the figure, but it is still a solid piece, particularly if Barry Allen is your thing, or if you happen to have any of the other Giants of Justice figures. On the other hand the original retail on this guy was $39.99, which even factoring in that he started life as an SDCC Exclusive, is still pretty outrageous for what you’re getting, even if you are specifically in the market for a big Flash figure.