I’ve recounted recently about how I’ve pulled back from buying Prize Figures, mostly because they were starting to get out of hand and I had no space to display them. All in all, I’ve been pretty well behaved on this newly imposed restriction, but I still had the odd pre-order pending here and there, and I decided to let most of them ride. I still dig these figures a lot, they look great, they’re inexpensive, and they come in handy for days like today where I don’t have a lot of time and need something quick and dirty to feed that content beast. So let’s check out this Caster Nitocris Super Premium Figure (SPM) from SEGA!

Nitocris hails from the Fate/Grand Order game, and I like to call this purchase a Consolation Prize Figure, because I really wanted to pick up Amakuni’s Scale Figure of her, but I just couldn’t bring myself to pull the trigger on that price, and so I satisfied myself with this figure instead. Yup, there’s more of that self control again. I’m not entirely hopeless. As with most of SEGA’s SPM figures, Nitocris comes in a very colorful and fully enclosed box, featuring some nice shots of the statue and a bit of English copy on the box to help you know what you’re looking at. Inside, the figure comes wrapped in plastic and requiring some minor assembly. Here you attach the head and the right arm at the elbow, plug in the support piece for her hair, and then plug the figure into the base. All told, she measures about 9-inches tall and now that she’s all set up, let’s have a look…

There’s something about chicks in Egyptian costume that does it for me, and this is indeed a very beautiful figure. Nitocris stands proudly with one leg in front of the other, her left hand resting on her hip, and her right hand clutching her staff. Her outfit doesn’t leave too much tot he imagination, and I ain’t complaining. She has a white top to cover her Upper Deltas and a sculpted blue sash to conceal her Lower Nile Valley. Her hips are covered in plastic pink “fabric” and the whole ensemble is held together by some sculpted beaded chains. She has some brown wraps on her forearms, and her plastform sandals have sculpted wraps that reach up to just under her knees. 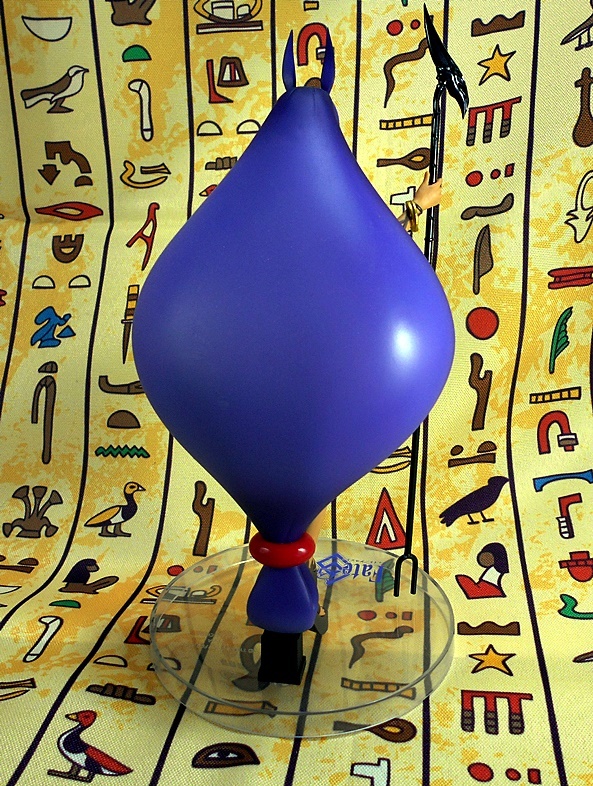 Nitocris’ curvy figure is framed by her copious coif of cascading blue hair that balloons out in the middle and comes to an end with a chunky red ring. This hellacious waterfall of hair looks cool and distinctive from the front, but sadly covers her entirely from the rear view. Seriously, from behind she looks like just a big blob. Besides the excellent sculpted detail on this figure, I think the colors are probably what I dig the most. The combination of white, pink, and deep indigo blue all looks so lush and striking against mocha colored skin. But what really shines is the wonderful gold leaf paint they used. Just lovely! 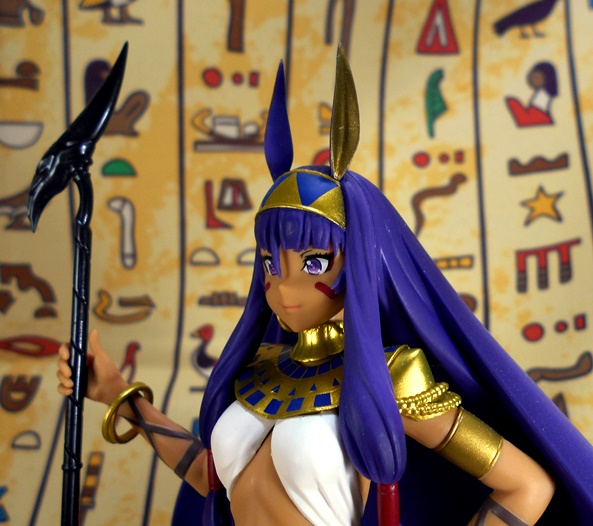 The portrait is suitably adorable, as Nitocris features a pair of Anubis-like ears, large printed purple eyes, and some face paint on her cheeks. She has a cute pointed nose and her mouth is pressed into a grin. Her gold and blue gorget and headpiece both frame her portrait perfectly. And as if she didn’t have enough hair pouring down the back of her, she also has two bunches running down either side of her head and nearly reaching her hips.

Her ebony staff is quite striking and is permanently attached to her right hand. I also dig the loose bangles that hang on her wrists.

The base is a simple translucent disk with the game’s logo printed on it in vibrant blue lettering. It’s simple, functional, and doesn’t take away from the beauty of the figure. 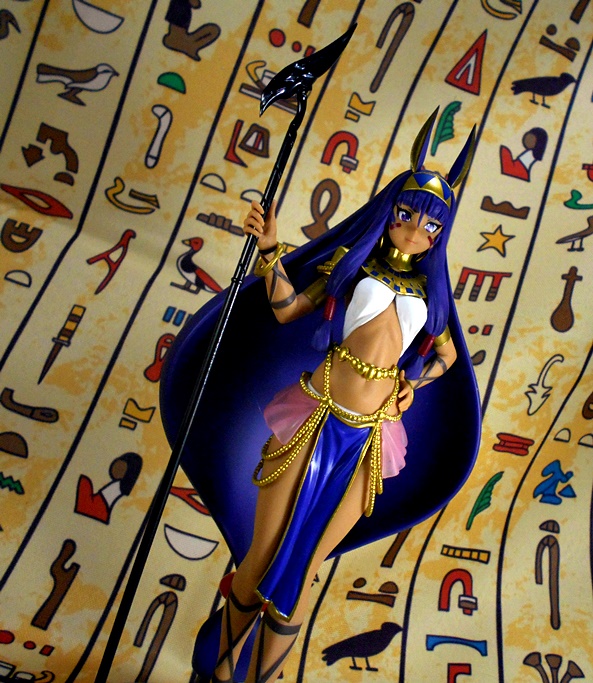 And that’s it for this Wednesday’s admittedly brief review. It’s always a treat to take a look at a new Prize Figure, especially since I won’t be doing it all that frequently here any longer. If you’ve been kicking around with me on FFZ for a while then you probably already know that I’m a big fan of SEGA’s SPM figures. At around $20-25, they offer plenty of bang for the buck and Nitocris here is no exception to that. I’m not even a big fan of the game, but I do love me my Servants and this one in particular has been calling to me for a while. I pre-ordered this lady a little while back, but she’s been available on places like Amazon for a while, and to me this one makes for a nice alternative to those pricier Scale Figures. Now, if Max Factory should happen to release a Figma of her, well I’d probably have to come back for seconds.

If there was any area where I dropped the ball in 2017 it was with Anime Saturday. There just weren’t enough of them. Now, in my defense, I already do at least four days of content a week, but then excuses don’t make my backlog of anime figures get any smaller. I honestly doubt I’ll have time to do any more this year, but I wanted to squeeze in just one more, so I can feel a little less worse about my lack of initiative. One thing I can say is that I’ve looked at a handful of figures from Fate/Stay Night and Fate/Extra this year, but today I’m venturing into the uncharted territory of Fate/Grand Order. It’s a phone app game that I will never play, but I still enjoy following the characters and lore. This version of Archer, Altria Pendragon, was a limited Servant, who could only be summoned during the game’s 2016 Summer Event. The character originally caught my eye as a limited Figma release, which quickly rocketed beyond what I was ever willing to spend on her.

And so it’s cheap JAMMA prize figures to the rescue! Altria comes in an enclosed box, which is typical of these prize figures. The box is nice and colorful and features a fair amount of English copy, including the character’s name. I’ll note here that this is basically a budget prize figure version of the exact same figure that was released as a proper scaled figure by Max Factory. Another figure that I would have loved to pick up, but I just couldn’t justify spending what she cost. I will, however, still point out some of the differences based on the pictures I’ve seen. The figure requires a little bit of assembly. You just peg her left foot into the base, peg the tip of Excalibur into her left hand, and tab the water gun into her right hand. 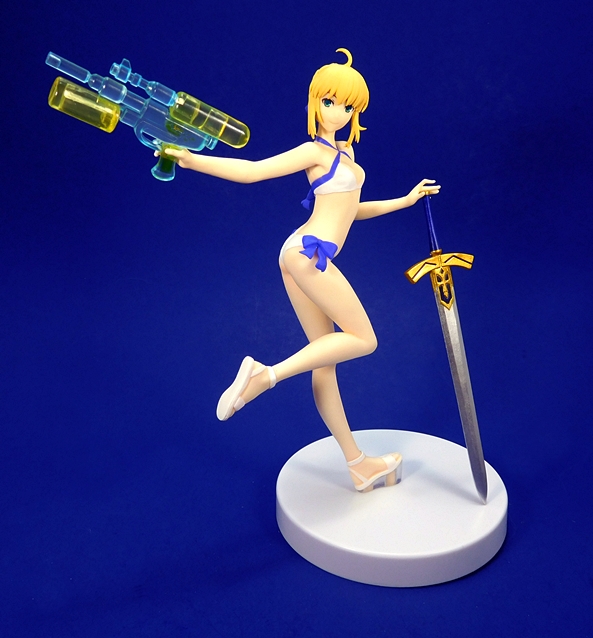 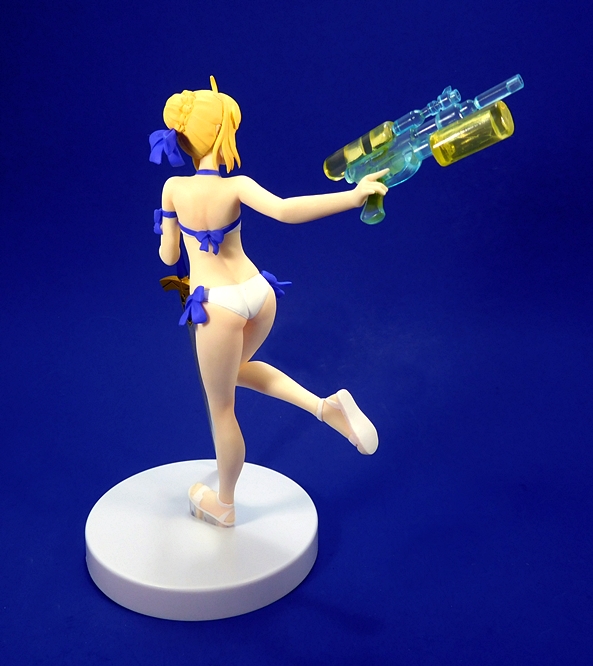 And here she is all set up and ready for a game of Water Blitz and looking pretty good. Altria is the perfect poster girl for the Summer Event, posing with her right leg kicking up behind her and leaning on Excalibur with her left hand, as she turns to fire off a blast from her water gun. And of course, since it’s summer, she’s wearing very little, just a skimpy white bikini with blue bows and ribbons, and a pair of white sandals.

Overall, the paint is pretty clean on this figure, although she obviously lacks the premium work of Max Factory’s version where the blues are more vibrant and the whites are actually pearlescent. Her skin tone here is also a little paler and flatter, while the skin on the better version features a warmer hue. I think that’s probably my biggest quibble about the figure, because everything else is pretty damn solid for what you’re paying. 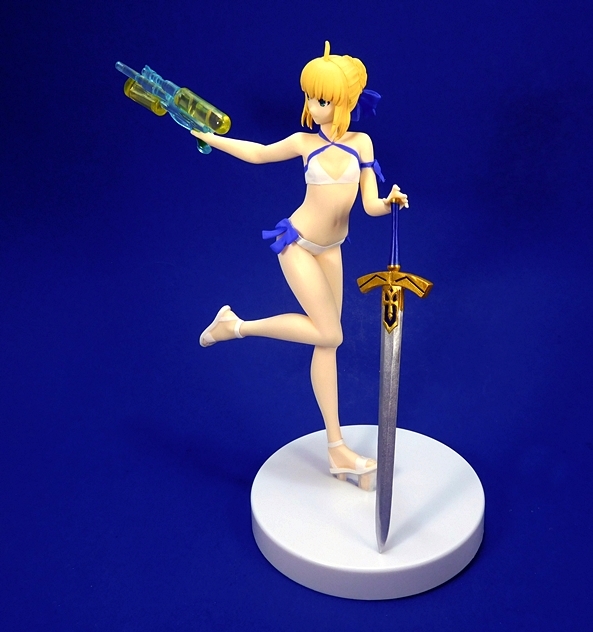 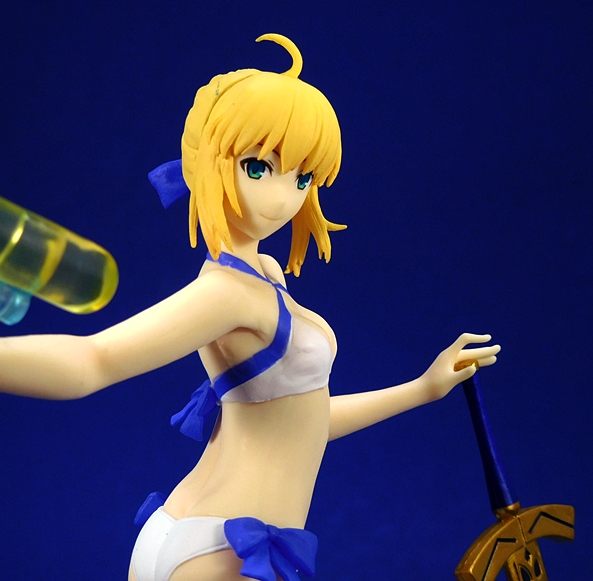 The portrait is pretty good, with perfectly printed blue eyes to match the bows on her bikini, and a very nice sculpt for her hair. She’s got a big blue bow on the back of her head and the ubiquitous ahoge sprouting from the top. 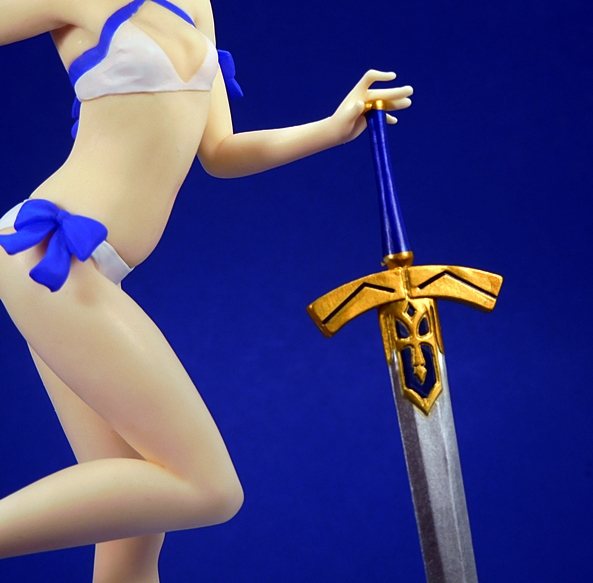 Excalibur is an extremely nice looking accessory. The blade is painted silver and the hilt is a combination of blue and gold. The peg holding it into her hand is also fairly unobtrusive, so you could actually use this as an accessory for a similarly scaled figure. 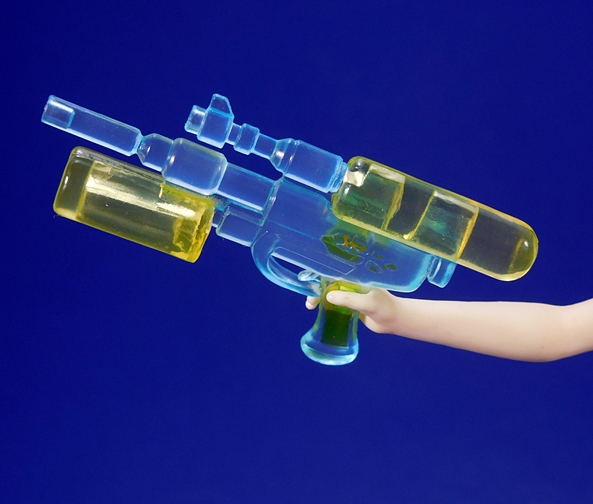 And because you can’t always rely on your legendary magic sword in battle, it helps to take a water gun! The water gun looks great and it’s such a fun accessory. The wetting weapon is cast in translucent plastic with both a yellow and pale blue tint and it tabs very securely into her hand. 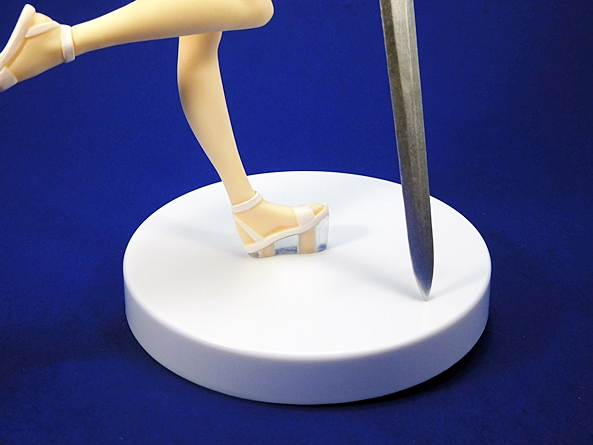 The easiest difference to spot between this piece and Max Factory’s scaled figure, is found in the bases. Max Factory’s version features a detailed beach base, this one gets by with just a a simple white disc, which is serviceable and doesn’t take up too much real estate.

I’m delighted that I was able to add this figure to my collection without breaking the bank. But make no mistake, if I only collected anime figures, I would have picked up the fully scaled figure in a heartbeat. But anime figures happen to be only a fringe part of my collection, and at around $140, I just couldn’t justify it picking it up. On the other hand, $12 shipped for a JAMMA figure and I still get to put the character on my shelf? Hell, yeah. Why not? I can’t stress enough that the difference between the two in terms of quality and polish is like night and day, but then with a $120 spread, that’s to be expected.