The original Cobra Rattler was one of my all time favorite vehicles as a kid. Of course, as a kid, I didn’t really know anything about the equally cool real world A-10 Warthog on which it was based. All I knew was the Rattler was prominantly featured in the GI JOE cartoon, it could take off and land vertically, carry two figures, and was great for the Cobra head hanchos to fight over while trying to escape capture my incoming Joe forces. My original Rattler is long since gone, and considering how many sandbox crash landings it made during its lifetime, there probably wouldn’t have been much left of it anyway. I really wanted to pick up the more faithful Target exclusive reissue from a few years back, but never found it. Looks like I’ll have to settle for this consolation prize that I picked up for five bucks at a garage sale last weekend.

This repaint of the original Rattler was released as a Toys R Us exclusive back in 2002. Besides the new deco, the gunner station no longer came with an enclosed canopy and the toy was retro fitted with the gimmicky soundbox that came with many of the GI JOE VS COBRA toys of the time. This one that I found still has the original box and instructions and incredibly enough all the parts. The box is a tad worn, and there are no inserts, but all in all, not bad. I really love the box art and the back panel shows the toy itself with all of its features. This one is missing the Wild Weasel figure, so I grabbed a couple of contemporary Cobras to serve as stand ins.

There’s a few things that need to be put together when you dump this thing out of the box. I really miss the good old days when you had to put toys together. Actually, mine came with a lot of stuff already done. I just needed to attach the wings, soundbox, landing gear and bombs and missiles.

I actually really like the new paint deco for this toy. The copper and black with red trim really pop. Don’t get me wrong, I prefer the traditional Cobra blue of the original toy, but as far as re-decos go, this one isn’t too bad. You could almost use it for Serpentor’s private Rattler, since the gold sort of matches his Air Chariot. The stickers on mine were already applied and they all look nice and fresh.

What I absolutely hate is the use of the neon red plastic used for the gunner station ring and the bombs and missiles. Not only does it look awful, but the plastic used on the missiles and bombs is so soft that they don’t want to stay plugged into their sockets. The result is you’ll get a lot of inadvertantly dropped bombs if you try to woosh this thing around the room. I’m also not thrilled about the lack of the canopy on the gunners station.

One nice touch is the inclusion of two battle damaged panels that can be snapped in to replace the normal ones.

I’ve never been a fan of the soundboxes used on this era of Joe toys, but the one on this Rattler isn’t too obtrusive. Its mounted onto the piece that holds the wings to the fusilsage and there’s a corded piece that plugs in under one of the engines and holds a nice big minigun. The whole rig stays together very well. The soundbox on mine isn’t working, and I’m just not motivated enough to open it up and replace the batteries.

The current Joe figures will fit into both seats of this Rattler, but its a pretty tight fit. So, overall this piece is a pretty mixed bag. The redeco is nice and the toy itself retains most of what was cool about the original mold. I could have done without the soundbox,but its tucked neatly under the jet, so it isn’t as big a deal as some of the other vintage molds that were retrofitted with this gimmick during the time. Overall, the plastic used for the weapons payload is the only really awful thing about this toy. I am by no means a customizer, but in this case, I plan on getting some black and silver paint to do over the obnoxious neon parts. It’ll go a long way to making this one sweet ride.

I usually love talking about my toys, but its going to take me an extra couple of drinks, just to get through this entry. Ok, so I don’t remember a lot about the GI JOE Vs Cobra line. I was on my own little break from collecting Joes (and proabably all toys) at the time, and while I did go back and get some of these figures and vehicles, they all tend to blur together in my head with SpyTroops and whatever else was out at the time. I wound up selling off most of the shit from that era when the 25th Anniversary stuff came out and I realized that most Joes from this era were garbage compared to the awesome new stuff and neither I nor my closets have any real regrets about doing it. Anywho, among the things I kept were a pair of these god awful tanks known as the HISS Type IV’s. I think the main reason I kept these was because I couldn’t get enough money for them to make up for the trouble of packing and shipping them. 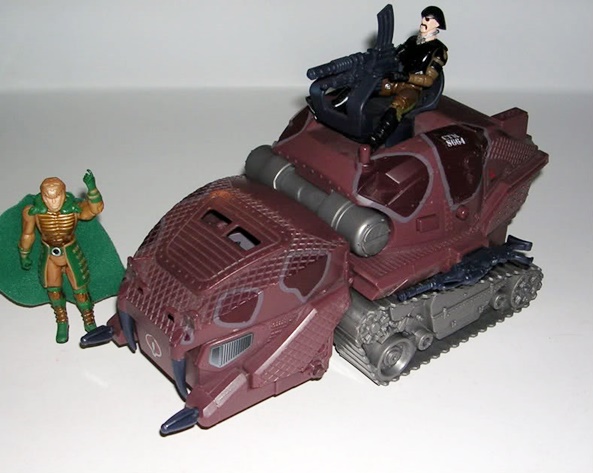 Now, don’t get me wrong. The fact that the Hiss IV is decorated to look like a fucking snake is not really the reason that I hate these things. That stuff doesn’t bother me because its very much in line with the classic cartoon and comics. Cobra had cargo planes with snake heads, snake robots, and, Jesus, if Cobra can have a friggin zombie emperor that wears a snake suit, then putting a little snake motif on their tanks isn’t going to make me too upset. Its basically just like nose art taken to the extreme.

Besides, the overall sculpt on these toys is pretty nice. The triangular treads are very much in keeping with the classic HISS design. The snakeskin texturing and paint apps are really well executed. And hey, gotta love those giant fangs on the front. Or maybe not. I’ll also say that having an enclosed, armored cockpit as opposed to having the driver sitting in plain view under a glass canopy is probably a much better idea from a tactical standpoint. There’s also a few cool armaments, like a rocket launcher hanging off the side under the canopy and two firing missiles on each side of the front grill. But beyond that most everything else about this vehicle is pure balls. So let’s look at some of the stuff about this toy that really pisses me off. 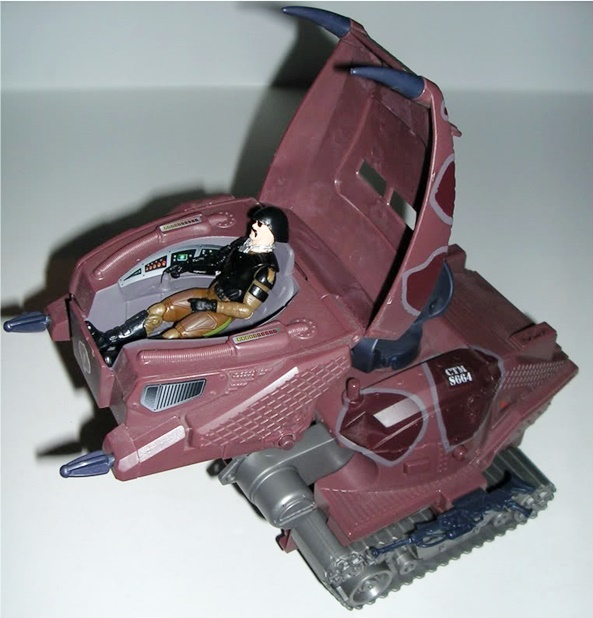 First off, what is the deal with the cockpit? It extends forward and then push a button and it flips up into the air on a set of extended stilts. What possible function does this serve? Its like they just put it in there because they could. Add to that the pointless fact that the canopy will not open unless its in this position. How the fuck is the driver supposed to get in and out? Sure, maybe on some scaffolding back at base. But how the hell does he get in and out in the field? Is this some kind of way Cobra instills bravery into their drivers? “Don’t sssssssscrew up, buddy, because you ain’t getting out until you get back to HQ!” Why would you design something like this? Its clearly the work of an insane person.

Secondly, the Type IV design replaces the turret from the original HISS with a completely exposed gun seat. Yeah, it wasn’t bad enough that the poor gunner’s head was sticking up out of the top of the tank, Cobra’s engineers had to make it even more dangerous to be a HISS gunner. Now, you have virtually no cover at all. Unless GI Joe is aiming directly at the flimsy iron plating in front of the gun, he’s probably going to hit you. You’re just a sitting duck up there. But then at least if the thing is about to explode, you can get away fast. The guy trapped in the cockpit will be a goner for sure.

Next up, I hate the big ugly sockets all over this thing. If memory serves, these were part of the sound chip gimmick that made different sounds depending on what weapon you plugged into it. Its ugly and stupid. Also, mine doesn’t work anymore and I’m too lazy to put new batteries in it. One other feature of the Type IV HISS is the fact that the back opens up. This is sort of cool, as you can toss gear in there or prisoners or whatever, but in the end, this compartment just reminds me of the little space on the back of a Big Wheel where you could pack your snack if you were going out for a long ride. It was a potentially good idea, which ultimately saw fruition in the DTC HISS, but here its just not executed very well. 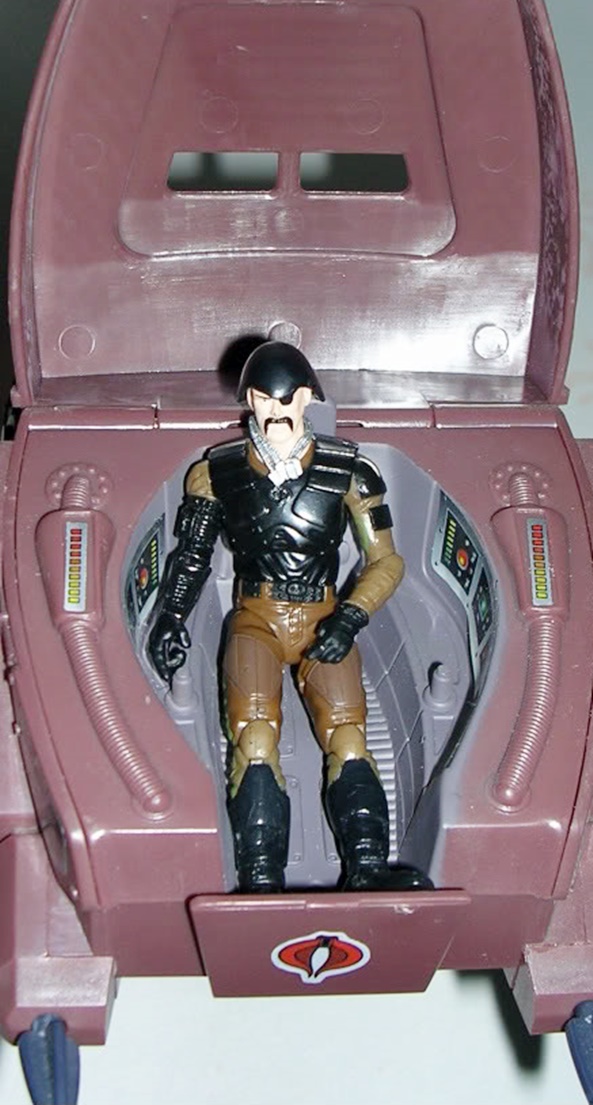 The HISS Type IV came bundled with a Neo Viper figure. As I recall it was a pretty cool figure, but I sure don’t have it anymore, which is why I’m using Major Bludd to show this thing off. I should also mention the packaging, which had no window to cover the toy and just left it hanging out there to collect dust on the shelf and have kids come along and peel off the stickers and rub boogers on it. I’ve never seen anything like it before or since.

This design was also repainted and recycled as part of the Valor Vs Venom line, where it got a pretty cool black and blue paint deco, but also a much bigger and dumber looking weapon mounted on the top. The new design made it look a bit more like a traditional Cobra vehicle, but this repaint was notoriously difficult to find as it came in on tail end of the series. I don’t mind owning this thing, or even two of them for that matter, mainly because they don’t  take up too much room and its cool to have a collected evolution of the HISS to display, even if that includes the lamer designs like this one. The real question is whether the new HISS will actually be worse than this one or not. I doubt it could be worse, but I did notice it has the same kind of elevating cockpit gimmick, so its good to know that Hasbro hasn’t learned from their mistakes.