It’s import week and that means that today kicks off a whole week of goodies from the land of the Rising Sun. This is where I make a concerted effort to clear out some of the figures and statues on my new receivings pile, all with the common theme of being anime related. Today also counts as a couple of firsts for me, as I’m opening up my first statue from Griffon and also my very first piece of merch from Sword Art Online! It’s Leafa! 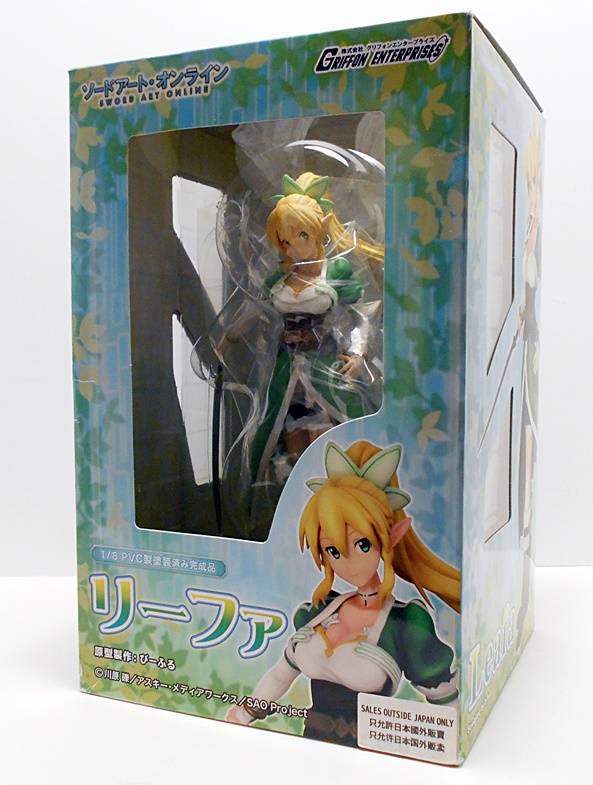 The box is right about what I expect from a Japanese statue package. It’s colorful, it features a lot of shots of the piece, some artwork and some windows to let the light in. None of the pictures on the box really do the statue justice, and I have to say if it was an enclosed box they probably would have scared me off. Inside the box, the statue is wrapped in plastic and encased between two clear plastic trays. Pretty standard stuff. The statue comes separate from the base, but all you have to do is peg her feet into it and put the sword in her hand and she’s all ready to go. 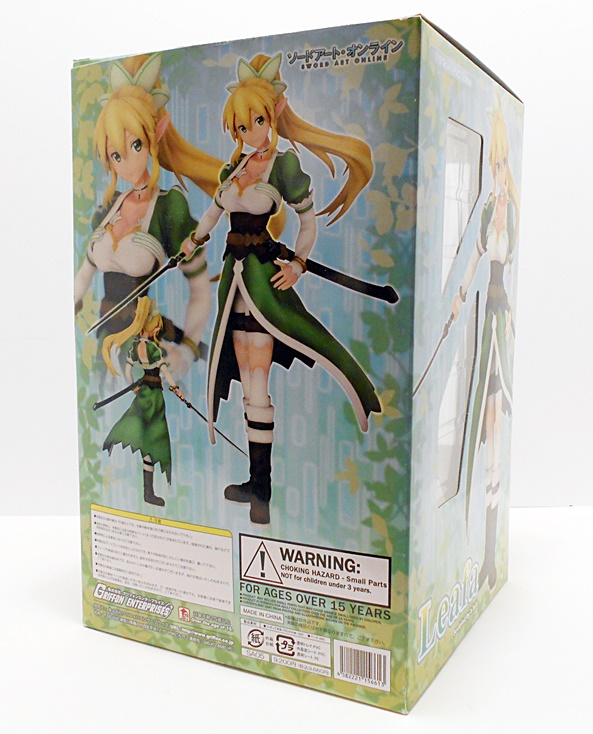 My anime viewing habits are pretty erratic these days, but it seems like at least once every couple of months, I’ll latch onto a new series and binge it and I did just that with SAO quite a few months back and only now started re-watching it again. Leafa comes from the second story arc of SAO, where Kirito must venture back into the Virtual MMO world to save Asuna from captivity with the help of his sister, aka Leafa. 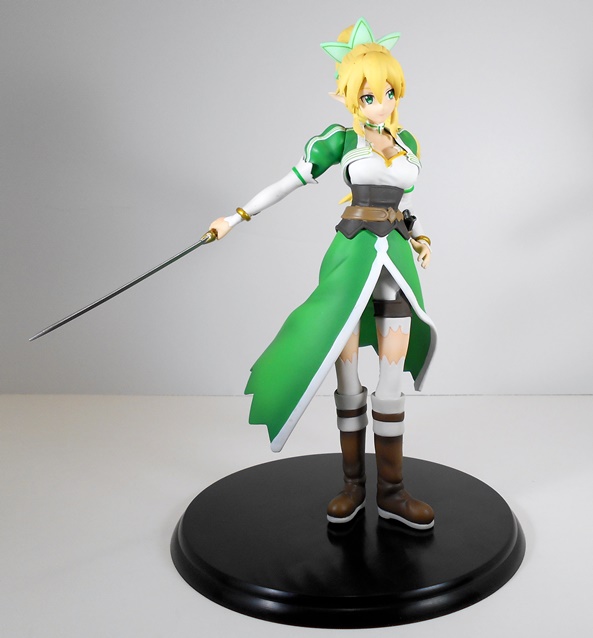 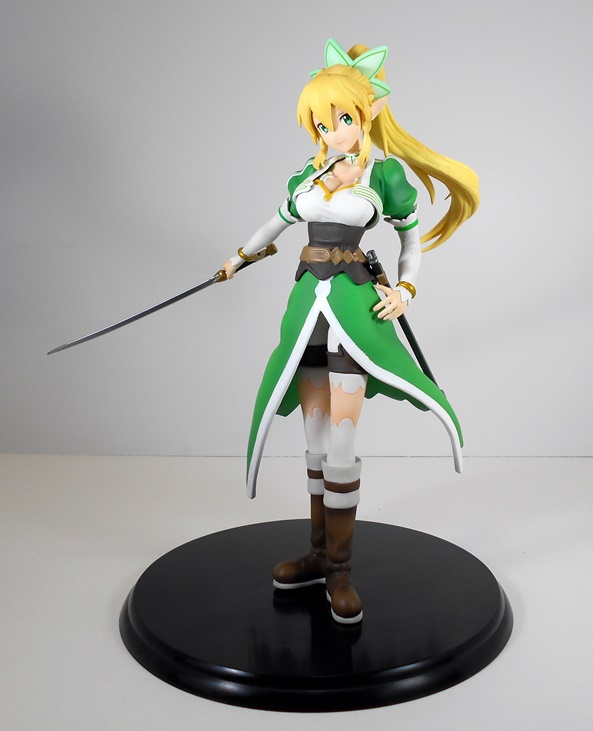 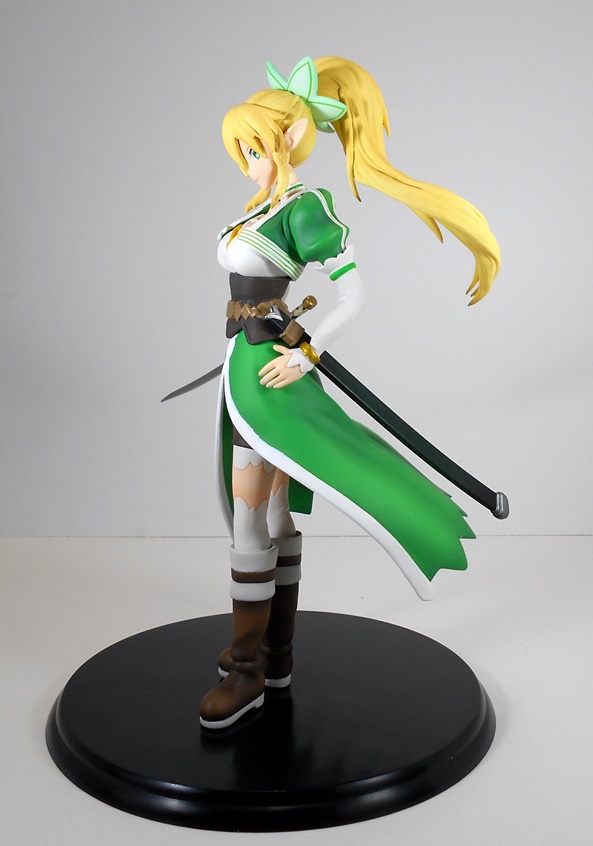 Leafa comes in her familar green and white outfit with her dress billowing out around her. She cuts a nice figure as she stands with heels together, left hand poised by her scabbard and her sword held out to her right side. Her face is angled downward and she’s peering up out of the corner of her eyes. As this is my first Griffon statue, I didn’t know what to expect. I wasn’t anticipating anything on the level of Kotobukiya or MegaHouse, but I have to say I’m very satisfied with the quality here, especially considering the price, but I’ll get to that in a bit. 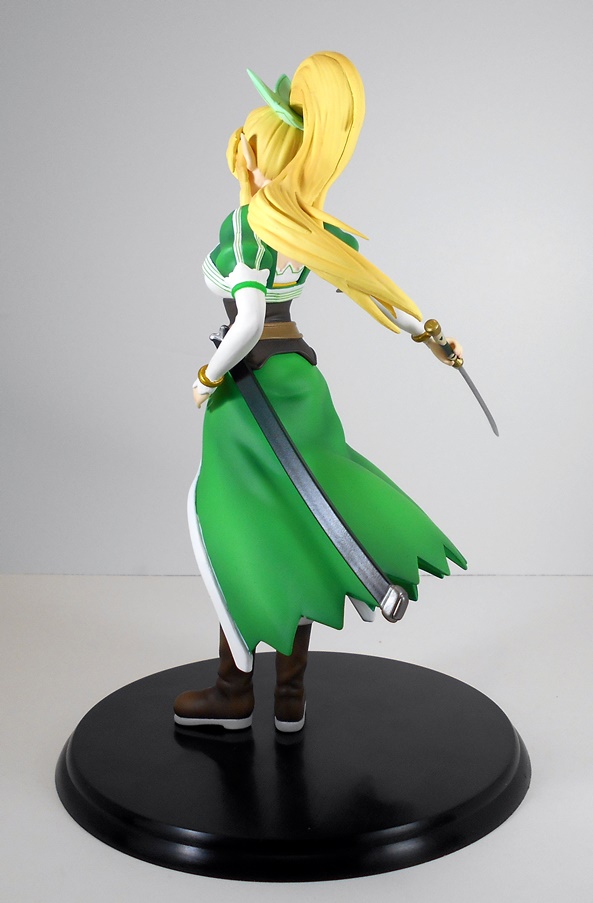 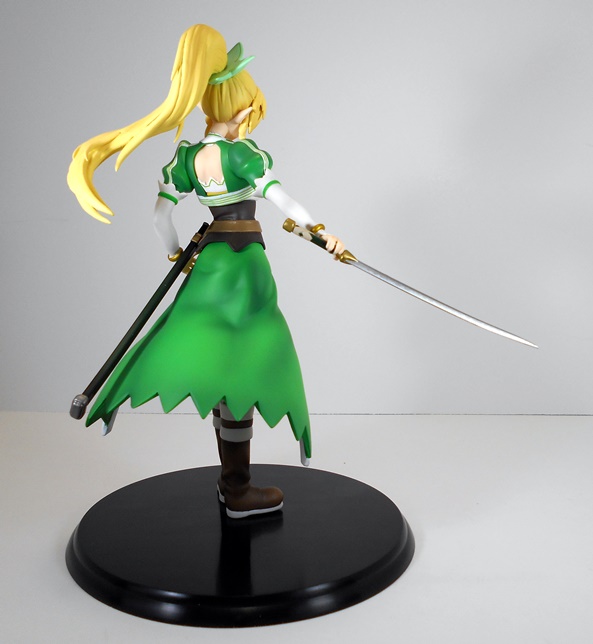 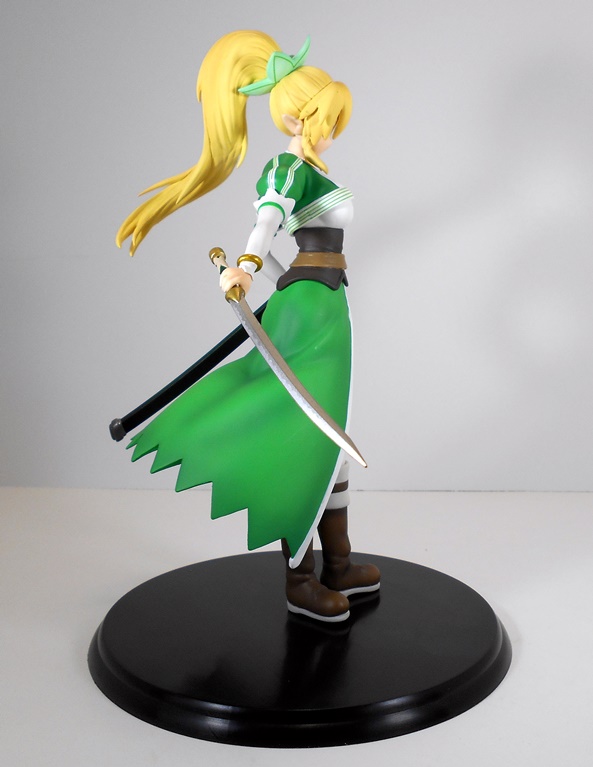 Almost every detail on the statue is part of the sculpt, rather than just paint. This includes the cut outs in her stockings, the white trim on her dress, and even the striping on her half coat. Everything about her outfit is made to look layered. I’m not just talking about things like the sculpted belt, but the half coat is actually sculpted from a separate piece of plastic and laid onto the figure. It really shows that they went the extra mile and it brings a lot of credibility to the sculpt and makes for a very interesting looking piece. 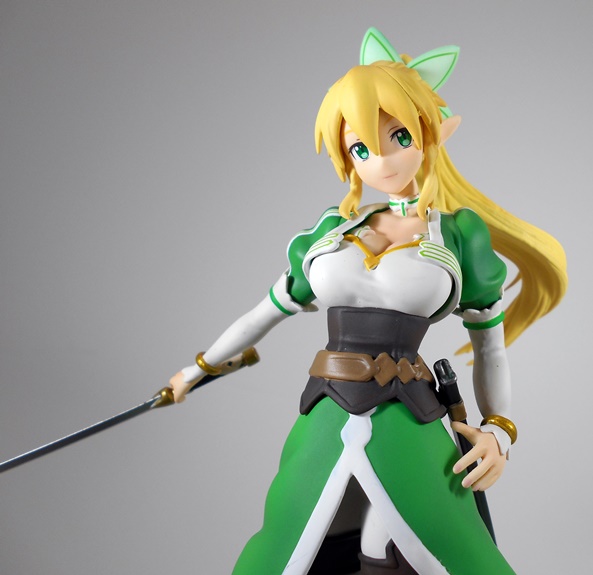 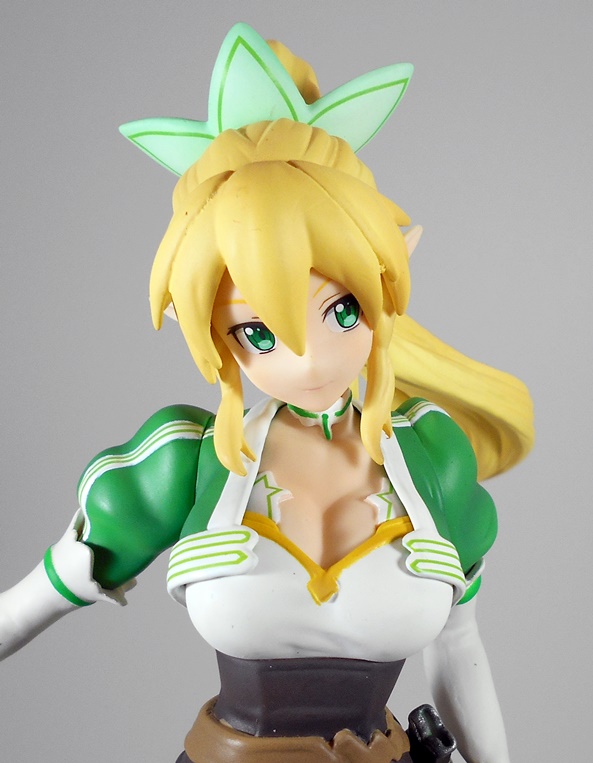 The portrait is soft and simple, as is often the case with these statues, but the paintwork on her eyes is exceptional, her pointy elf ears are on full display, and the tiny little choker collar is a great detail. The sculpted hair is also particularly well executed as it swirls behind her in a ponytail. 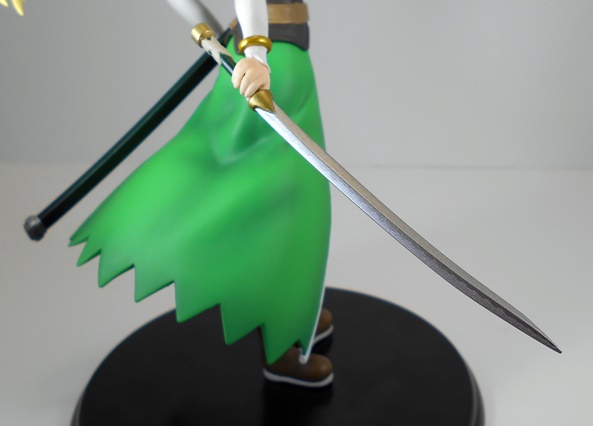 The sword is composed of a nice, stiff piece of plastic with a shiny silver blade. The hamon line is even visibly painted on if you look close enough. Some might argue about the lack of wings on Leafa’s back, but in a standing pose like this, they wouldn’t have been visible anyway, so I’m fine with their omission. As great as the sculpt is, the overall quality of the paint has the chops to back it up. I really love the soft shade of green they used for her outfit and when blended with the white, brown and yellow it makes for a warm and pleasing floral motif that perfectly suits the character design. 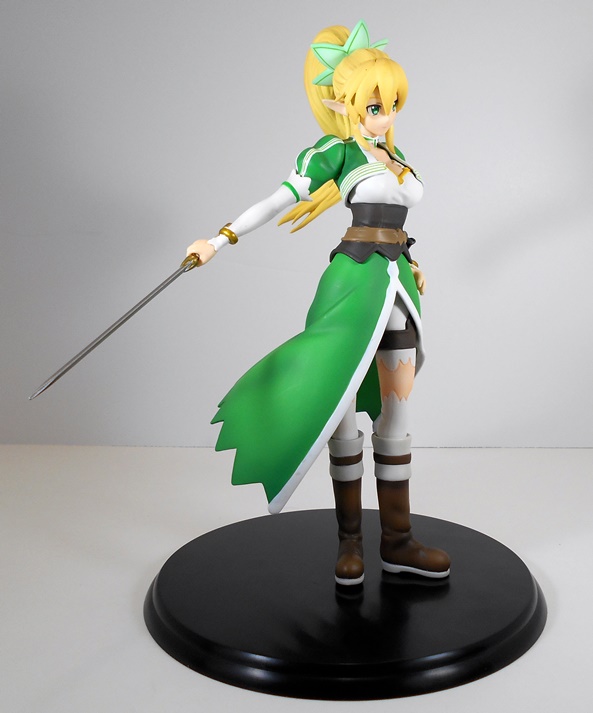 If I had one complaint, it would be the base. It’s a simple black disc with a beveled edge, and that’s fine, but it’s hollow underneath, which makes it feel rather flimsy. Granted, it looks good and it’s only something one would notice by picking it up and handling it, but it feels like a statue of this quality could have used a sturdier base to rest on. 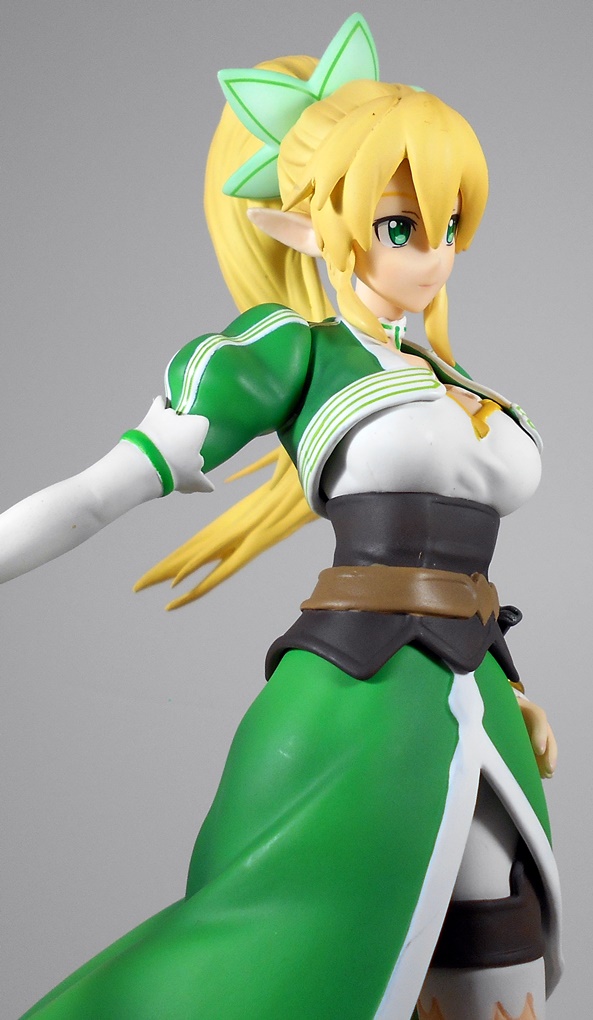 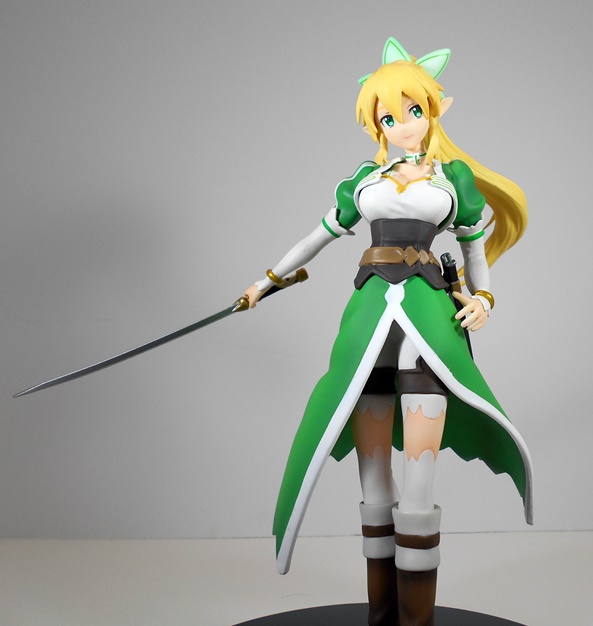 I have no idea what the original retail on this piece was, but just from poking around Griffon’s stuff seems to be anywhere from $75 to $100 (although their recent Sinon statue is going for around $150!), which sounds about right for a statue of this size and quality. I had it on my Amazon wish list for a while and one day happened to notice it dropped to $15! Normally, I would have written it off as a bootleg, because god knows I’ve been burned before with Amazon and bootleg statues, but in this case I knew the seller and they had a good rep. Besides, at fifteen bucks, I figured what did I have to lose and the answer was nothing. It’s since bumped up quite a bit, but is still available for under $50 and at that price I still would have been quite satisfied.