Fallout and I parted ways with the release of Fallout 76, but at least I can always relive my glory days with the franchise, whether it be on Steam with the PC originals, or on the consoles with the newer games. And that brings me to ThinkGeek, which has been turning out some Fallout statues as part of their Modern Icons series. Last year I had a look at their very cool Nuka Cola Pin-up statue and I was so happy with it, I pre-ordered their Vault Girl. Well, she’s been out a while, and sitting on my Pile of Shame, so let’s get her open and check her out. 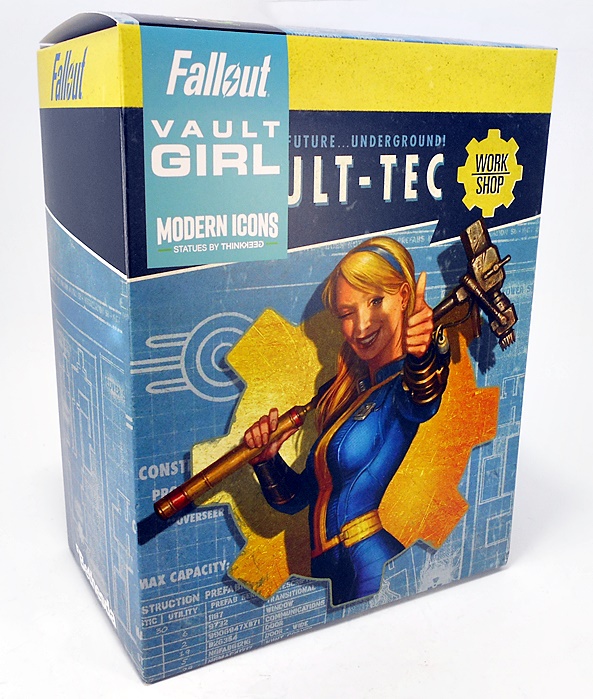 This roughly 1/10 Scale “limited” PVC statue comes in a fully enclosed box with an outer sleeve to protect it. The art is pretty nice, including some great concept art for the Vault Girl herself, and a blueprint-style background. Inside the box, the statue comes fully assembled between two clear plastic trays.

And here she is, looking… OK. I dig the composition quite a bit. Vault Girl is posing with her sledge hammer on her shoulder, her left arm reaching out with a thumbs up, while she offers a cheesecake wink and a grin. Despite her wearing the classic blue Vault-Tec jumpsuit, it’s form-fitting enough to show off her curves and add some sex appeal. The back of her suit shows that she’s from Vault 111, making this a Fallout 4 statue, as the protagonist from that game was revived from cryogenic sleep in Vault 111. 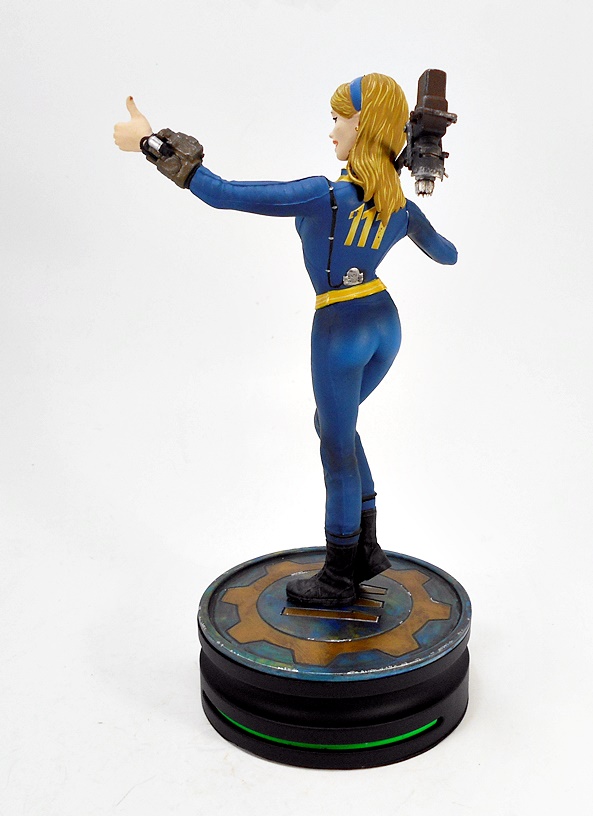 What I’m not as keen over is the quality of the paint. The shades of bright blue and yellow are well chosen, but pretty much all the yellow suffers from the darker base bleeding through. I guess you could argue it looks dirty and everything is dirty in the Fallout world, but I’m positive that’s not what they were going for here. There are also some splotches of gloss on the blue of the jumpsuit, which I presume is from spilled glue or primer. The skin-tone is all flat and lifeless, and shows scratching here and there. The boots are matte black and they did provide some black shading over the blue suit to give it some texture.

They did a nice job recreating the Custom Super Sledge, a rocket-propelled sledge hammer perfect for knocking down those Feral Ghouls and Rad Scorpions. The paint and detail are both solid and it looks like it came straight out of the game. It’s definitely one of the higher points of Vault Girls ensemble. 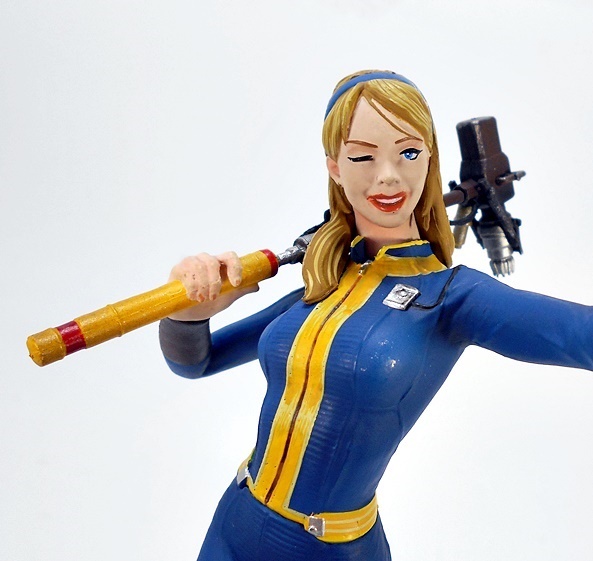 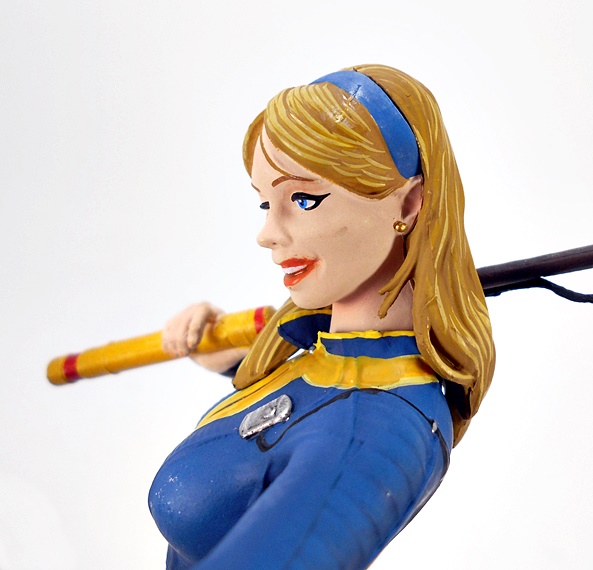 The portrait is a huge let down. I think a big part of that is a combination of the awkward wink and smile. Instead of cute, she just comes across to me as creepy. The paint isn’t particularly sloppy, maybe a little uneven around the lips, but it’s all so flat, particularly in that one open eye. It completely lacks the depth and charm of the previous statue’s portrait, and that’s a real shame. 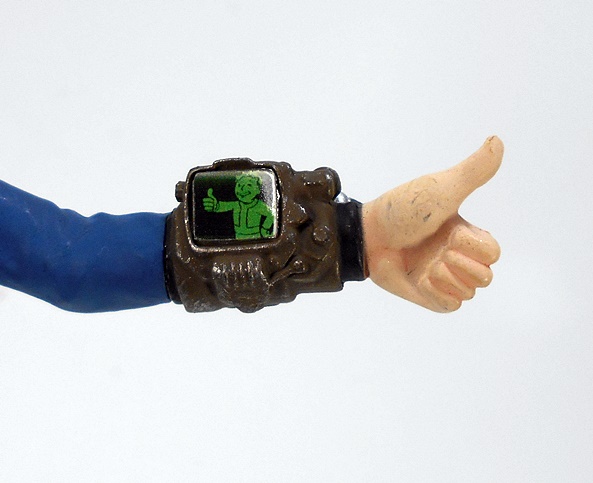 I do think that the Pipboy turned out pretty nice. Considering how small it is, they were still able to get some details into the nobs and vents and other little details. It’s given a silver wash to make it look worn and weathered and the screen has a green monochrome image of the Vault Boy himself returning Vault Girl’s thumbs up. 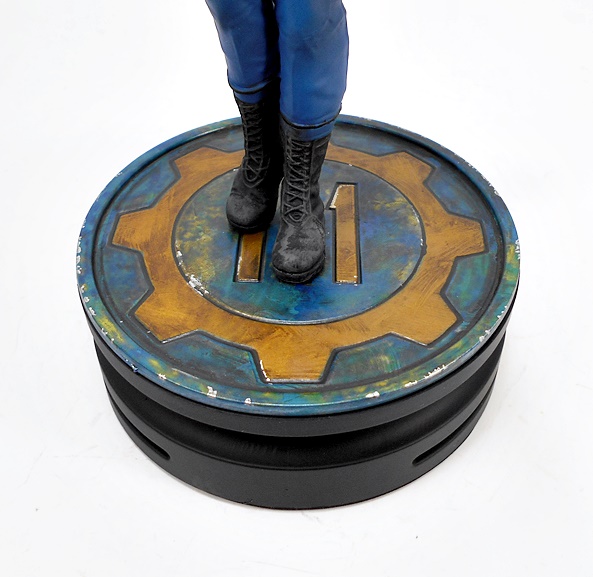 The base is pretty fantastic. It’s a simple circular platform, with the vault gear icon encircling the number 111. Yeah, it looks like it reads 11, but I’m assuming her foot is on the middle 1. There’s some beautiful weathering here, which looks rather beyond what the rest of the statues coloring offers. As I mentioned at the beginning, this is a “limited edition” piece, and that much is stated on the bottom of the base. But similar to Nuka-Girl, there’s no statement of limitation and the piece isn’t numbered.

Ultimately, there’s some good things here and some not so good, but I think it’s safe to say I’m disappointed with this one. Every little thing about it feels like a major step down from Nuka-Girl. Specific call outs include the sub-par paint and a portrait that is certainly nothing to brag about. It’s kind of ironic that I got the better one on sale at $25, and pre-ordered this one at $45. Sure, it qualifies as a budget statue, but that’s still about five bucks more than Diamond Select charges for their Gallery statues, and those have been superior to this one in every way. And so much like me and the Fallout franchise, I think it’s time for ThinkGeek’s Modern Icons and I to part ways. This one is probably going back in her box, but at least I’ll always have Nuka-Girl!

Have you heard? There’s a new Fallout game out and apparently it’s pretty controversial! It was an easy pass for me, because I have no interest in Online Fallout Lite, but to be fair, I haven’t played it, so I’ll let the reviews speak for themselves. I will, however, toss my hat in the ring as a pretty dedicated Fallout fan. I’ve been on board since the day I got a PC that would play the original and up until now, I’ve played them all. Yup, even that mediocre Brotherhood of Steel on the Xbox, and the annoyingly addictive mobile game. But I’m not here today to talk about the new game. I’m here today because ThinkGeek had a big sale on Cyber Monday Week and I bought a Fallout statue!

And what a great idea for a statue from the game! Sure, there have been Vault Dweller action figures and Power Armor statues, but to immortalize that kissable face of Ms. Nuka-Cola in a PVC Statue? That took inspiration. And I gotta be honest, while this was sold to via an Email advertising the sale, I probably would have picked it up at full price if I had known it existed. Anywho, the roughly 1/10 scale statue comes in a handsome box with an outer sleeve and some spiffy retro-vintage-style artwork. This is apparently #3 in ThinkGeek’s line of Modern Icons statues produced in partnership with Chronicle Collectibles. The first was the the T-60 Power Armor from Fallout 4 and the second was Aloy from Horizon: Zero Dawn. It’s my first experience with this line or Chronicle Collectibles for that matter, and I’ll admit when I first held the box in hand, I had my doubts because it felt like the box was empty. But there was indeed a statue inside, enclosed between two clear plastic trays, and all ready to go on my shelf. Let’s check her out! 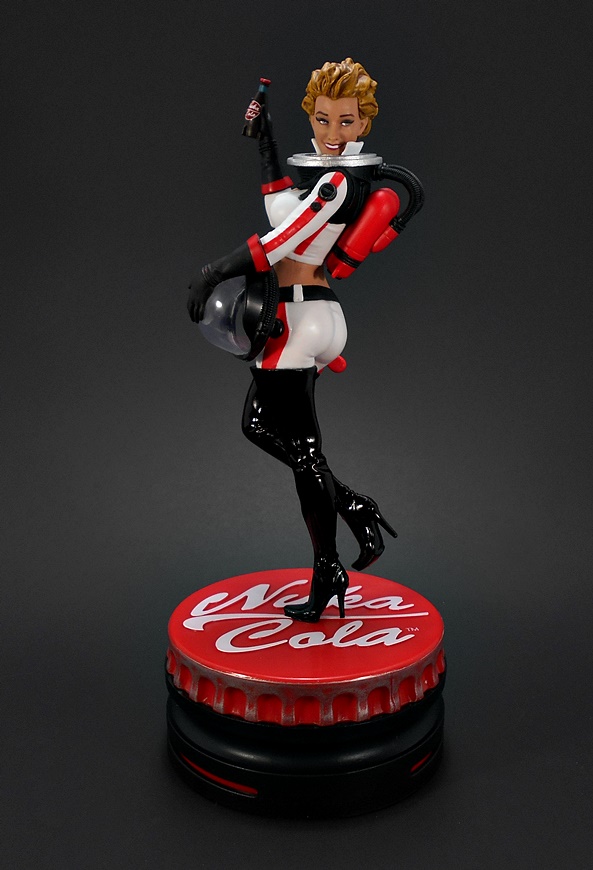 And here she is, perched atop a giant bottlecap and looking dead sexy in her retro space suit. The figure itself measures right around the 6-inch mark with a few inches added by the rather pronounced base. The pose is great. It’s just the kind of pure cheesecake that I associate with vintage ads. Ms. Nuka stands with one leg drawn up at the knee, holds her space helmet against her left hip, and offers up a bottle of bubbly Nuka refreshment, while glancing back over her shoulder and offering a bright, beaming smile. My god, I’m so thirsty!

The detail here is fairly minimal, which is in keeping with the retro-styling. Her space suit consist of a pair of thigh-high black high-heeled boots, tight white leggings with red stripes on the sides and a wide black belt. The fact that her mid-riff is exposed is probably my favorite quality of this protective garment. The cropped-top features the same white with red striping as the bottoms, black gloves, a very low-cut top, and a collar to attach the helmet to. In terms of bringing the vintage Nuka-Cola art to life, I think the statue succeeds brilliantly, from the composition to the sculpt, I wouldn’t change a thing. The paintwork is also quite good. The gloves and belt are matte black, the top and bottom have a bit of a sheen to them, and the boots are high gloss. There are just a few flubs in the paint application, mostly on the red border on the end of her left gauntlet, but absolutely nothing that draws my eye away from appreciating it. 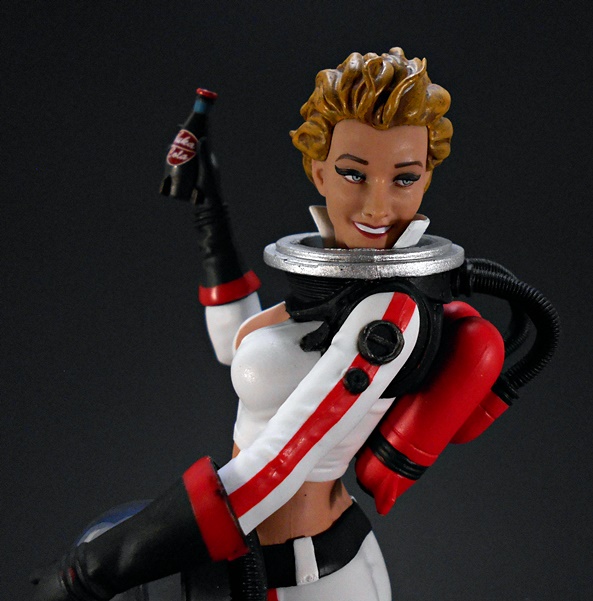 The portrait is in keeping with that retro look as well. From the style of her hair to her makeup, she looks like a pin-up from the 50’s. The facial features are painted quite sharply, the eyes are even, and while there aren’t individually sculpted teeth, the pearly whites are painted bright and clean. 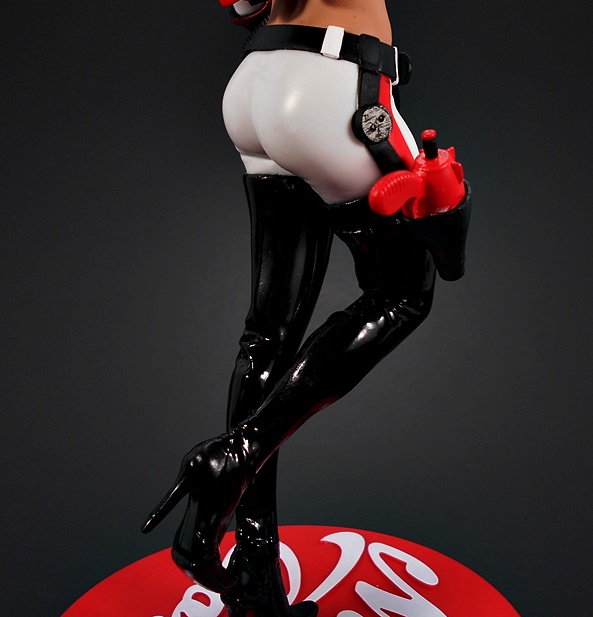 And while the design is relatively simple, there are still some nice touches. Her red pop-gun rests snugly in its holster and looks like the old toy ray-guns that my Dad probably played with. The red oxygen tanks feature segmented hoses that feed into the base of the helmet’s collar and the same type of hose can be seen encircling the base of her helmet. And yes, the sculptor paid special attention to capturing all of Ms. Nuka’s very feminine form her copious cleavage right down to the curves of her tushie.

And of course the bottle of Nuka-Cola looks great! 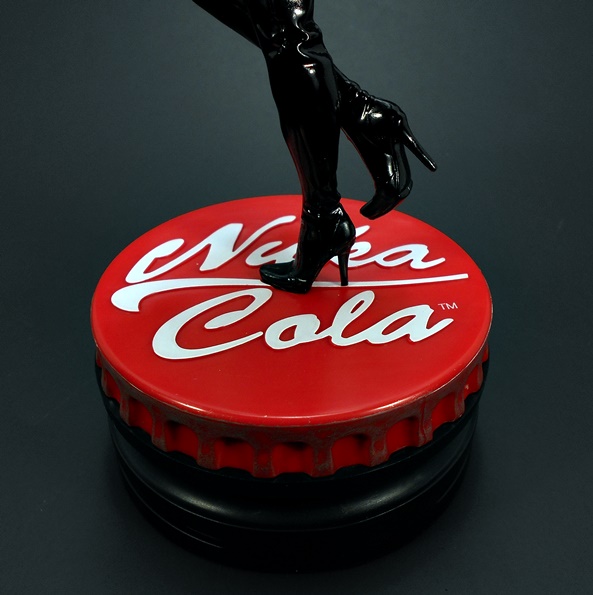 The giant Nuka-Cola bottlecap is a perfect base for the figure and it too is wonderfully executed. It’s painted in a bright red with crisp white lettering, right down to the TM icon, which at first I thought was to drive home the illusion that this is a real brand, but then I’d imagine that Bethesda probably copyrighted the Nuka-Cola trademark for real. But as good as the base looks, it’s also completely hollow, and that’s the one thing this statue is missing… any sense of heft. I commented earlier how the box felt empty, and that just goes to show how light this thing is. Does that really matter if it looks good on the shelf? I guess not, but for whatever reason, I tend to associate quality with weight when it comes to statues, and in this case the lack of weight is a little off-putting. Maybe they should have just filled the base with sand.

The bottom of the base features some copyright information as well as the name of the statue and that it’s a Limited Edition. There’s no actual statement of limitation on the box or the statue, so it’s hard to say how limited this piece really is. I mean, I guess all collectibles are limited in some sense, right? I found two things here interesting: One, that the statue is licensed as Fallout 4 specifically, even though it’s not stated on the box, and that she’s called Nuka-Girl here, even though she’s called Nuka-Cola Girl on the box. Otherwise, there’s really nothing to see here.

These Modern Icons statues retail for $50 a pop and I guess that’s not too bad, but with some of the PVC statues that Diamond Select has turning out in the $40 range, Ms. Nuka-Cola may strike some as a bit on the pricier side. She’s definitely smaller than the Femme Fatales stuff, as well as Koto’s Bishoujo line. I picked this one up when ThinkGeek was offering for half-off and hey, for $25 I figured I couldn’t go wrong and I was right. I like this piece a lot, and it’s made me take a look at some of their other pieces. Although some of these seem to go up in price when they go out of circulation, so I may just focus on what’s coming as opposed to what I’ve already missed.