I realize some of you Matty subscribers get pissed off when Matty reissues figures because you think it drives down the value of your original releases. That may be true, I haven’t researched it, but as someone who got into this line just at the tail end of last year, I am so happy that Matty is giving newcomers second chances at some of these figures. This month the re-issue figure  was Man At Arms, and despite some serious bugs in the ordering process, I was finally able to grab him and add him to my collection. And man, what an awesome figure he is! 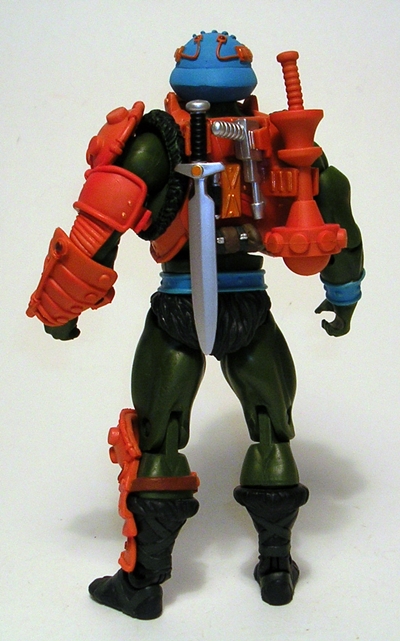 As expected, the body is completely recycled from He-Man only painted green with a blue belt and wrist bracers. Of course with all his armor he really stands out as a unique figure. His trademark orange armor consists of four pieces: A vest, a left shin guard, and two plates for his left arm. His chest and back piece is an amazing sculpt, with the hoses and wires on the front with some assorted paint apps. The back has a molded rolled up rucksack and clips to hold almost all of his weapons, which is just one of the things I love so much about this figure. Its also awesome that Mattel made his arm guard into two pieces so as not to interfere with his elbow articulation.

Man At Arms comes with two interchangeable heads to solve the infamous mustache dilemma. They are essentially identical save for the mustache on one to make him more Filmation accurate, so you can decide whether you want to pay tribute to vintage figure or cartoon. Either way the sculpts are great, complete with blue helmet with orange trim. And if you’re curious, yes, I prefer the mustached Duncan. The heads pop on and off with no problems and they remain nice and tight when attached, so no bobblehead worries. Of course if you happen to have a lot of money lying around, you can always pick up a few extra Man At Arms to display with the non-mustached head as Palace soldiers. Personally, at $30+ per figure, army building in this line is a bit beyond my means.

Like his adopted daughter Teela, Duncan comes with an embarrassment of accessories. Besides his extra head, he comes with a big orange mace, a silver short sword, a silver laser pistol and the 200x version of the Power Sword. Everything but the Power Sword can be stowed on his backpack, making him a walking arsenal. While the mace is a little bland, the sculpting on the other weapons is excellent, especially the Power Sword, which by the way is now owned by my previously swordless Battle Armor He-Man.

I had really high expectations for this figure, and I’m happy to say he lived up to all of them. Even if I had to go the Ebay route and spend a lot more for him, I think he still would have been worth it. Obviously, he’s an important character, and Mattel certainly paid the proper respect to him with a lot of careful attention and extras. Between the awesome sculpting on his heads and armor, his slew of weapons and ability to store them, and the bonus sword for my BA He-Man, this figure is just plain awesome and a fantastic homage and update to the vintage original.