So, last time we looked at the tragic tale of upstart toy company, Resaurus and their Duke Nukem figure. But Resaurus’ Duke line was far from a one shot deal. This was a company that delivered on some really good video game action figures from Street Fighter to Crash Bandicoot and some of those can be damn pricey these days. But for my money, their best looking line of figures came out of the Quake II franchise. It’s a fitting situation since at the time Quake II was everywhere. If you were even slightly into PC gaming you were absolutely saturated by it. In addition to doing a few figures based on the game’s horde of baddies, Resaurus also made two good guys: A male and female Marine, each packaged with a monster. Let’s turn the camera around on this First Person Shooter and see who’s holding the guns! 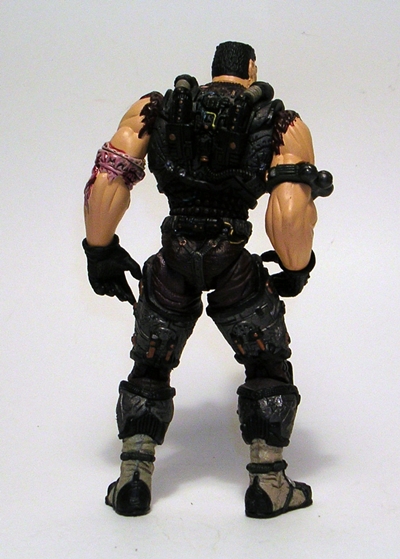 The male Marine is just called Marine Major (if he had a name, I don’t remember it) and he comes packaged with a Barracuda monster. The Major is big and buff and one hell of a fantastic sculpt. The amount of detail on this figure really is impressive. He has a flattop buzz cut and a vicious sneer with a well placed trickle of blood coming out the corner of his grimace. His arms are bulging with muscles and veins and he’s got a bloody bandage wrapped around his left arm and a strap of grenades around his right. His combat outfit is a messy hodgepodge of plates, exposed electrical components and hoses. Its pretty worn and there are several bullet impacts situated about. There’s even sculpted treads on the bottom of his boots. The sculpt and paintwork here is just oozing with love for the project. It’s like the designers didn’t know when to stop, and I mean that in every possible good way.

Marine Major is slightly pre-posed and intended to be holding out both his weapons, but he still has good, serviceable articulation. His head rotates, his arms rotate at the shoulders and have swivels in the biceps arms. There are no hinges in the elbows and they are molded in a slightly bent position. His legs rotate at the hips and he does have hinged knees. No, he’s not super articulated, but there’s enough here to make him a solid and fun action figure rather than just a collectible statue trying to pass for a figure.

Of course, Quake II is all about the guns, and that idea wasn’t lost on Resaurus as The Major comes with two massive weapons: The missile launcher, with a removable missile clip, and a minigun-style rifle. The detail on these weapons is as impressive as the figure itself. In fact, I’d dare say these are some of the best weapon sculpts for a figure in this scale that I’ve ever seen. You can count all the rivets and there’s textured plating sculpted right in. He can easily hold both weapons at once, although how he could remain standing while firing them is beyond me… and yet he does! Clearly this guy is ready to murder him some Strogg.

Of course, The Major needs someone to shoot with those big damn guns and so he comes with the Baraccuda pack-in figure, which apart from being another really nice sculpt, doesn’t really do anything. Nope, this is just a hefty piece of nicely sculpted rubbery plastic. I’m not complaining as it’s still a wonderful looking piece, but considering the size of the Marine and his two weapons, its a very nice bonus for an already well rounded package. You rarely get this much stuff in a carded figure. Poor Baraccuda… I don’t think he really has a chance against those guns. 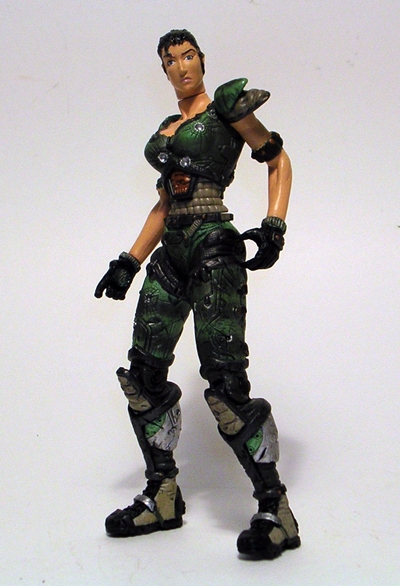 The femme fatale of the line actually has a name, Athena, although she was also known as the Jungle Marine. She comes with the more substatial of the two monster pack-ins, the Strogg Dog, but that’s probably because she and her weapons are much less bulkier than the Major and use less plastic. Athena is a really nice figure, but the sculpt isn’t quite as impressive as the Major. I think the main problem I have with her is the thin head and the vacant stare. Her face just doesn’t have the same expressive character as the Major, although she is fairly attractive and sports a decent bit of clevage and a pony tail. Too bad she’s almost wall-eyed. Her combat outfit isn’t as complex as the Major’s either, but it still has loads of detail and the same awesome little bullet notches and battlewear. As her title implies, the cloth parts of her outfit are camoed green for a jungle environment. Oh, and that Quake I tattoo on her arm? That’s like a big wet kiss straight from the designers. Athena has the same basic articulation as the Major. She has a rotating head, rotating shoulders, and swivels in her upper arms. Her legs rotate at the hips and she has hinged knees. 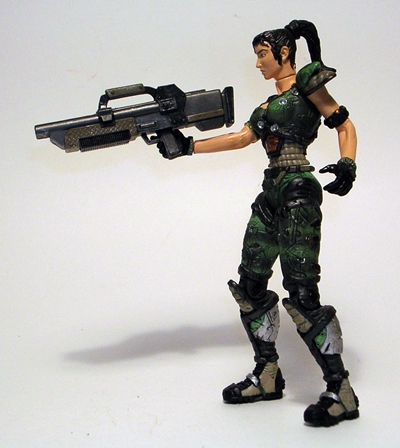 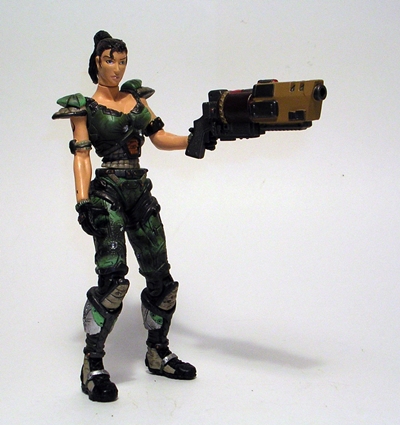 So as not to discriminate against the fairer sex, Athena also comes with two weapons. Sure, they’re both a little smaller than The Major’s guns, but she’s got to be able to hold them so fair is fair. She has a combat shotgun, and what I think is an assault rifle, although it looks more like a really bulky pistol. Its been a long time since I played Quake II, so the weapon inventory is escaping me. They both have great detail, but overall they are not nearly as impressive as the Major’s arsenal. 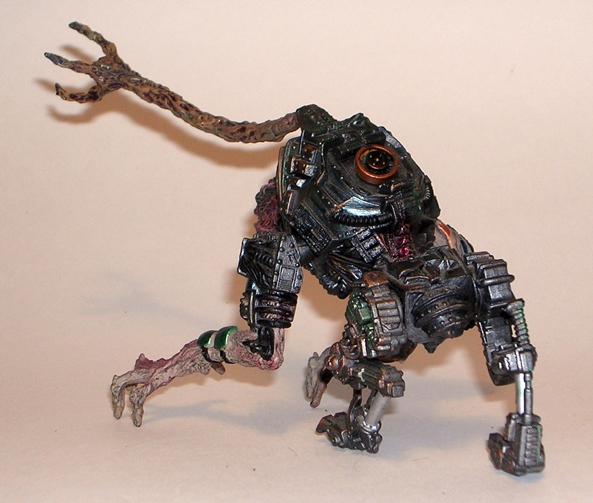 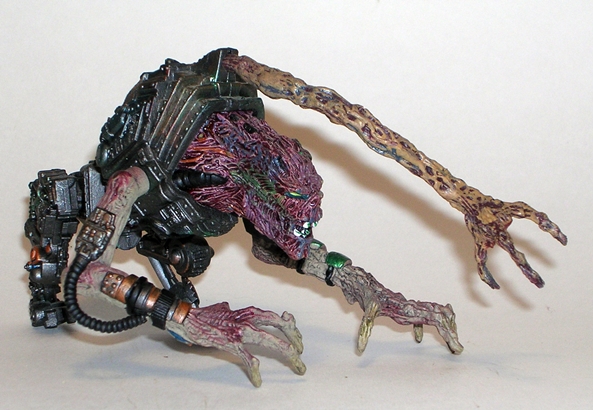 Of course, to make up for her smaller size and smaller weapons, she comes with a much bigger pack-in monster, the Strogg Dog. Rather than just a sculpted piece of PVC, this Strogg pooch is more like a second action figure as he has rotating joints on all four of his legs in addition to a big bendy tenticle-arm that comes out of his back and over his head. The sculpting on this figure is just amazing and I love the way the soft quishy organic bits contrast with the harsh metal cyborg components. The fact that this is just a pack-in piece and not really the main attraction just goes to show how much work Resaurus put into this line. You just wouldn’t see this kind of stuff on the pegs nowadays. 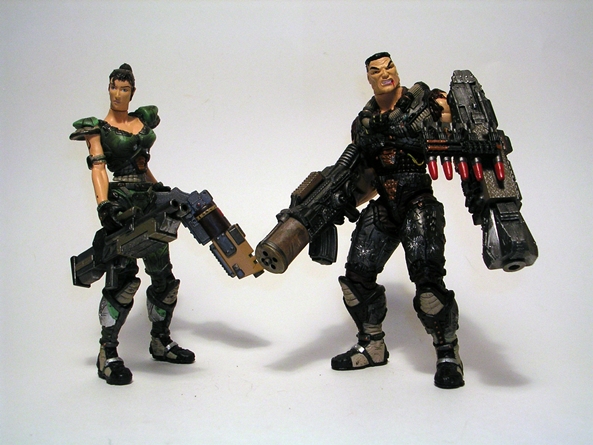 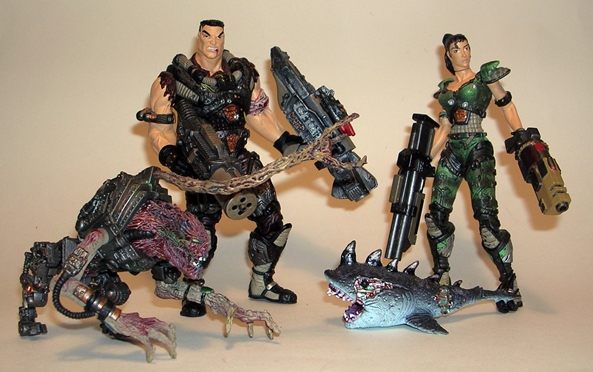 From my experience the Quake II figures are easier to find than most of Resaurus’ Duke Nukem toys. You can still scare up carded examples of both these figures for under $20 each if you look hard enough and that’s really not a bad price for figures of this size and quality. Also worth noting, these figures are much, much better made than the self-destructing Duke Nukem figures, so you don’t have to worry about breakage. Alas, the same can’t be said for the enormous Strogg Tank, as mine broke into so many places that I won’t be able to review him here. But next time I’ll round out the rest of the series by lookng at the Iron Maiden and Strogg Technician.