And I’m back with more of Playmates’ WildC.A.T.S. figures. This time I’m taking a look at all the bastards that our heroic WildCATS figures had to fight. Actually, there weren’t all that many and oddly enough most of the regulars in the toon were never immortalized in figure form. Slag was in quite a few episodes, though, and while the Daemonites were in just about all of them, they looked like normal humans most of the time. I always thought that felt like some kind of hokey live action series excuse to not show aliens. This was a cartoon. It didn’t cost any more to draw them as Daemonites and let’s face it… that’s what the kids wanted to see! Anyway, the interesting thing about these two figures is that unlike most of the WildCATS, they don’t look a lot like their animated counterparts, although in this case, that’s a good thing, because these figures look much, much better. Let’s start with Slag… 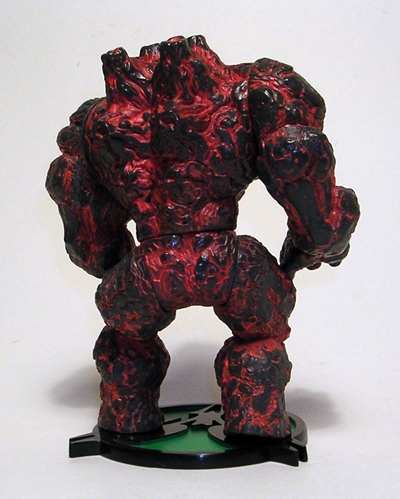 Slag was one of Helspont’s henchmen and he’s some kind of magma rock creature. The toon version of Slag looked pretty crappy, as he had very little detail and was mostly just a big hulking orange guy who for some reason hissed like Cobra Commander when he talked. Thankfully, Playmates upped the ante with the figure’s sculpt and produced quite a nice looking creature. They gave him a rocky body with intricately webbed veins of magma running all over the place. Liquid Magma!!! There’s nowhere on this figure that isn’t brimming with detail and the paint apps really compliment the sculpt beautifully. Even if you don’t collect this line, but find yourself in need of a big hulking rock creature figure, Slag here would make a fine candidate.

Slag has eight points of articulation, which puts him pretty high up in the WildCATS line. His head can turn from side to side, his arms and legs rotate at the shoulders and hips, and he has swivel cuts in his wrists and his waist. He’s not terribly pre-posed either, so you can make good use of his articulation while playing around with him. 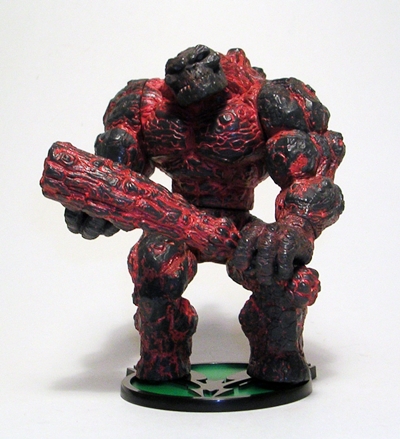 Slag comes with three accessories. You get a big club that looks like it’s made out of the same stuff he is. He also comes with a similar styled rock. I have no idea what it is. I guess he’s just supposed to throw it at you. And, of course, Slag comes with a Daemonite style figure stand. Speaking of Daemonites…

The Daemonites were the common foot soldiers in the cartoon. They didn’t get a lot of screen time in their natural form because they couldn’t survive long in the Earth’s atmosphere. As a result, they had to be carried around in egg-like stasis chambers and possess humans in order to move around freely. What the hell! The only time we usually got to see them was when they were trying to possess someone, getting evicted from someone, or when we saw them through VooDoo’s special sight. It was one of the few things that I didn’t like about the cartoon.

Like Slag, the Daemonite’s looked somewhat different in the cartoon. The general shape was the same, including the extra set of eyes and the extra set of arms, but the cartoon Daemonites were green, which made them look more like lizards to me. As with Slag, Playmates went above and beyond to produce a really cool looking creature here. I absolutely love this figure. The four beady eyes, the massive toothy rictus grin and the disgusting blue veins running all over it’s body. This is a cool looking beasty. There’s a bit of disconnect between the color used on the body and the limbs, but I don’t think it detracts from the figure all that much.

The Daemonite has seven points of articulation. All four of his arms rotate, his legs rotate at the hips and he can swivel at the waist. Unfortunately, this figure can be really tough to stand, probably because of his chicken legs and his hunched pose. I should also note that I own two of these figures and while one is perfect, the other came out of the package with a really messed up bent leg, which prevents him from standing all that well without the figure stand.

The Daemonite comes with a blaster, a stasis pod, and the same figure stand as Slag. The blaster is a cool design, but unfortunately it’s just cast in one drab tan color. It could have definitely benefited from some paint apps. The stasis pod doesn’t do anything, but it is pretty nicely sculpted. 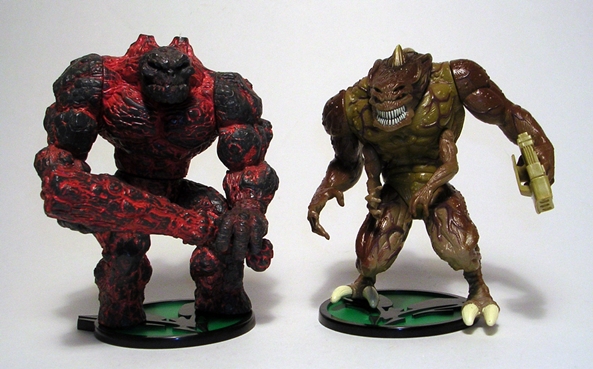 I dig that Playmates went the extra mile on these guys, especially since there weren’t as many bad guy figures as there were heroes. Had they designed them closer to their cartoon counterparts they would have probably looked pretty crappy. Although, there’s so much detail in these guys they do look a bit out of place next to the simpler animated/comic book style sculpts of the WildCATS themselves. I sometimes use Slag in my Star Trek displays and the Daemonite is so damn cool that he often warrants a spot on one of my display shelves even when the rest of the WildCATS figures are put away.

I’m going to finish it up next time with the two verions of Helspont’s stooge, Pike, and Major Max Cash, member of The Black Razor outfit and estranged brother to Grifter.