It’s a Transformers Generations double feature today, as I’m trying to get as much stuff cleaned out as I can before the end of 2010. Y’all know Hasbro is digging deep for their G1 fanwank homages when they start referencing the Pretenders toys. As if just to show you that Bludgeon wasn’t an isolated incident [Note to self: Get around to reviewing Bludgeon -FF], now we get Thunderwing, and even though he’s inspired by a sub-line of toys that I hated with a passion, I think he turned out absolutely awesome.

Yes, it’s the typical Generations packaging. There’s nothing new here. Thunderwing comes carded in his jet mode and there’s a bio blurb about him on the back of the card. Apparently he’s quite the badass. Cool! Thunderwing fills out the bubble very nicely, thanks to his two missile launchers. Oh yeah, I also melted off the Decepticon logo because I forgot to turn off my flash. Sorry.

Take a look back at the in-package picture and you’ll see the Level on this figure is labeled as Easy. Yes, Thunderwing has a really simple transformation and that’s reflected in his alt mode. If you turn him over in jet mode, you can pretty much see what’s going to happen and if you’re not a fan of seeing a nearly perfect robot glaring back at you from the undercarriage of a jet, this may annoy you. The only surprise in the engineering is the way his legs fold out from behind his chest piece, and honestly, I think Hasbro did that just so that he wouldn’t be even more simple. After all, they could have just had his upper legs telescope into his lower legs and it would have worked just as well. Nonetheless, Thunderwing is a perfect example of how a Transformer can be simple and still pretty damn cool. And speaking of cool, Thunderwing also features a detachable drone!

There’s something about Thunderwing’s jet mode that I absolutely love. He looks like he would fit right in flying in formation with the Seekers or Coneheads. The grey, blue and purple color scheme works really well for a Decepticon and there’s a ton of sculpted detail across the surface of the toy. Let’s face it, you can’t have too many Decepticon jets. 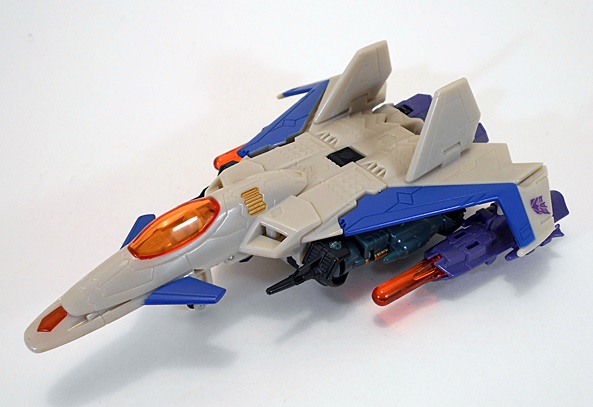 While the jet mode is a great looking toy, it’s not without a few blemishes. The wings have a habit of coming detached from the body a little too easily. There’s just nothing there to tab into and you can see in a few of my pictures that there’s a gap. Secondly, the robot kibble under the jet doesn’t offer any ground clearance. So, even though he has three sets of flip down landing gear, he can’t really rest on them. Finally, his robot arms don’t peg in anywhere. They don’t really flop about, but it’s pretty uncommon that Hasbro doesn’t include some way to secure all the robo-bits in alt mode. But enough nitpicks about the jet, let’s see how the robot mode fares… 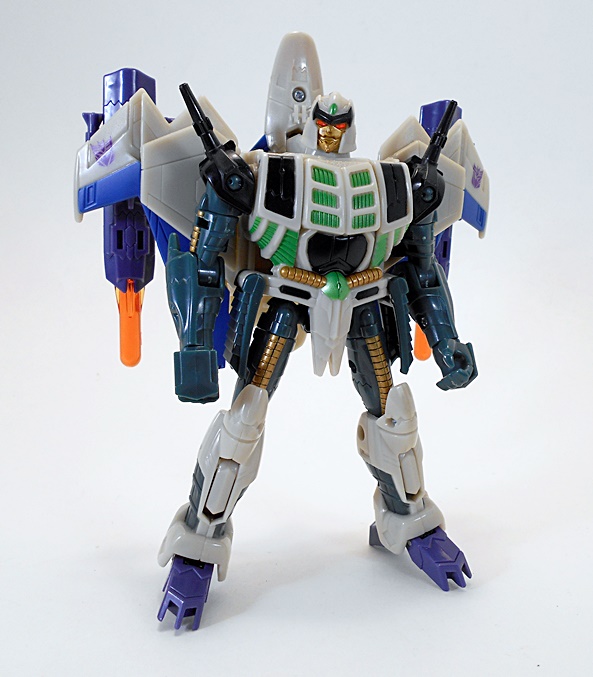 Yeah, baby, check out that robot mode! I love it! It’s very reminiscent of the original G1 Thunderwing’s Pretender shell. The organic, rounded look to the arms and legs remind me of the style introduced in the 1986 movie designs, albeit not so much what was reflected in the toys at the time. Sure he’s wearing most of his jet mode on his back, but I think it folds up pretty well and I love how the Decepticon insignia on his wing tips are properly orientated for his robot mode. I’m also a big fan of the way his guns angle off of his shoulders.

Even in robot mode, you can still store his missile launchers on his wings. It’s a little bulky, but I like the fact that there’s somewhere to put them. I also really dig the fact that he can launch his drone right off his back when he’s in robot mode. That would come in handy. 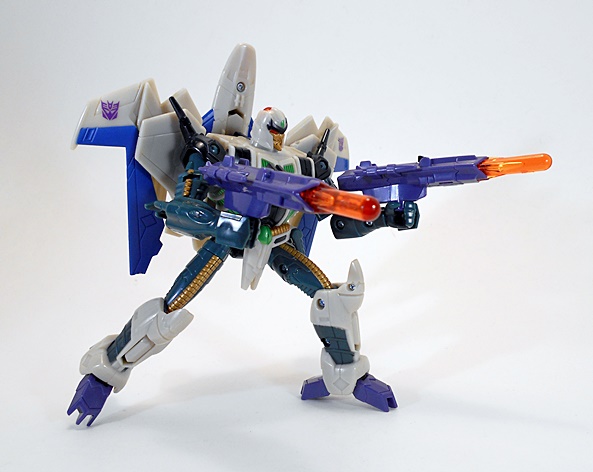 Of course, the missile launchers can be removed and placed in his hands to be used as guns. And caution is advised, because these babies have hair triggers and a pretty good firing distance.

Thunderwing’s head sculpt isn’t what I would call traditional, but it certainly features a lot of personality. He has a full “helmet” with some very cross eyebrows and a beautifully painted gold face with a rather intimidating and monstrous mouth. And the light piping! Oh, the glorious light piping! It works really well on this figure.

I’ll concede that there are a few things about Thunderwing that may put people off and it’s possible that all but the most hardcore fans are likely to miss the nature of his homage. Even I had to look him up in one of my books to remind me what the original Pretender looked like, and I’m rarely stumped when it comes to my G1 references. And yes, if you’re all about clever and complex transformations, then Thunderwing probably isn’t for you. But if it sounds like I’m talking this figure down, that’s far from the case. He’s a very fun Deluxe and a welcome addition to my Decepticon Air Force.

[And that’ll do me for this year. I’m off to take a nap and then I’ve got some serious drinking to do. I will crawl out from under my bed tomorrow long enough to upload my daily post. Until then, be safe and enjoy! -FF]