Somewhere on FigureFan, I’m pretty sure I did a commentary on what was shown at Toy Fair last year. I’m also pretty sure I spent some time there pontificating at how much I hated the Pursuit of Cobra HISS toy. The thing that really stuck in my craw about it was how Hasbro incorporated the elevation feature last seen in that terrible HISS TYPE IV design. I eventually warmed up to it a little bit as I saw better pictures, but I was still in no rush to get one. Unlike the Fury from yesterday’s feature, I probably would have never picked up this vehicle if I hadn’t found such a good deal at it at Ross. Let’s see if it managed to win me over. 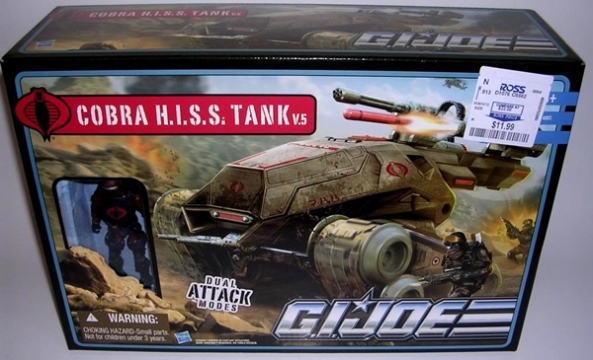 Yep, love that Pursuit of Cobra packaging. It’s a simple box with fantastic artwork on the front and a nice picture of the toy on the back, detailing its many features. Unlike the Fury, the box for the HISS is really thick and even bowed out a little on the sides. There’s a window showing off the HISS Driver figure and his filecard is printed on one of the side panels. Open up the box and pull out the tray and you can instantly see that you’re going to have some assembling to do. It’s nothing too complex, but I think it’s pretty cool to be getting vehicles that actually need to be put together again. I was also happy to note that I scored a black one and not the crappy brown colored version that shipped first. There’s also a ton of stickers to apply, but I skipped a number of them, either because they don’t show up well against the dark plastic or they’re in spots that I’d never notice. 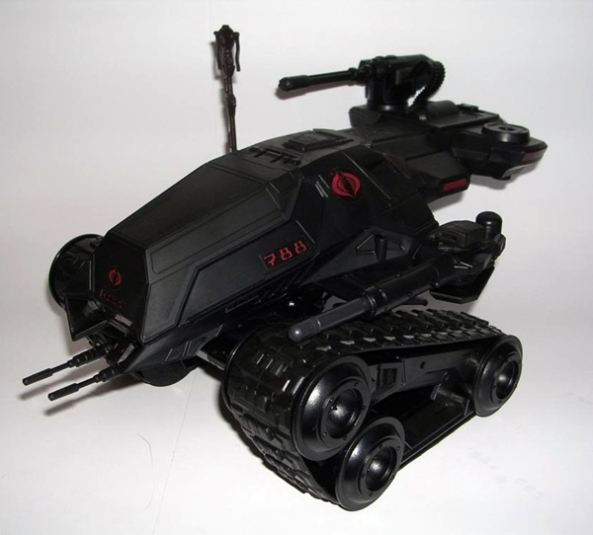 Once I got this baby together I was suitably impressed by its size. Granted, a lot of it is because the chassis rides so high on the suspension, even when it isn’t in the elevated position. Still, it’s fair to say that it dwarfs the original HISS. It’s an extremely formidable looking vehicle, easily capable of greasing its wheels with the guts of GI JOE fools. It still has the iconic triangular treads that every HISS vehicle has had since Cobra rolled the first one off the assembly line way back when, but the rest of it has been completely overhauled. The first of my favorite updates is the discontinued use of the clear cockpit in favor of a completely armored one. It’s essentially what Pursuit of Cobra did for the Tiger Ghost Hawk. It makes more sense and it looks better. Second, gone is the rear gunner position for the poor Cobra who might as well have held up a sign that said, “Look at me, I’m a target!!!” Instead, there’s a drop down hatch under the back for a gunner to sit, fully encased in the HISS’ armored bowels. Oh, did I mention it has real rubber treads? Major points for that. 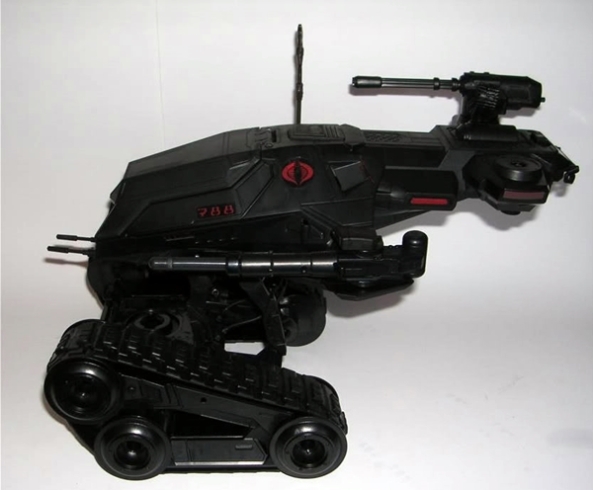 The new armaments consist of a double chin gun right under the cockpit, a belt fed machine gun and a shooting missile launcher. The later two can be positioned in any of four hardpoints, with two located on the top and one on each broadside. I’d love to get a second one of these just to load all the weapons on one of them. And then there’s that elevation feature. It’s not nearly as ridiculous as it was in the TYPE IV HISS, but it still seems pretty useless. Unlike the MARK IV, however, you don’t need to elevate it to get into the cockpit, so you can conceivably forget that feature exists at all. I know I will!

The HISS comes with a Driver figure, which is extremely faithful to the original design and the one seen again in the 25th Anniversary Collection. In fact, the head is practically identical. New touches include a strap on breastplate and backpack. He comes with a revolver and a Cobra standard that can be plugged into one of the holes on the HISS. 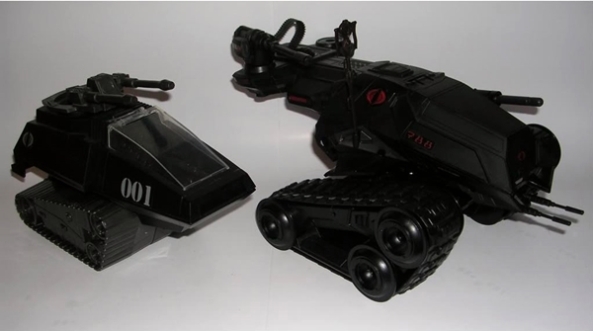 If ever there was a fine example of why it’s bad to prejudge toys based on some quick photos from a convention, the Pursuit of Cobra HISS is definitely it. I hated this thing the first time I saw it. Yeah, when I saw some better photos, it started to grow on me a little, but I still wasn’t excited about adding it to my collection. Now that I actually have one in hand, I’m completely in love with it. The size, the design, the modular weapons, the rubber treads… it all really clicks. It’s one of the coolest Cobra vehicles I’ve seen in a while and easily a worthy successor to the mainstay of the Cobra land fleet. Simply awesome.