What the hey. Since we kicked off the week with a couple of GI JOE vehicles, and I promised to go Lego-Free for the rest of the week, let’s just stamp a GI JOE theme on the week and be done with it. I’ve dragged a couple of totes out from the bowels of my closet to see what we can come up with. Today we’re going to look at another of my favorites in the Cobra arsenal: The Ringneck. 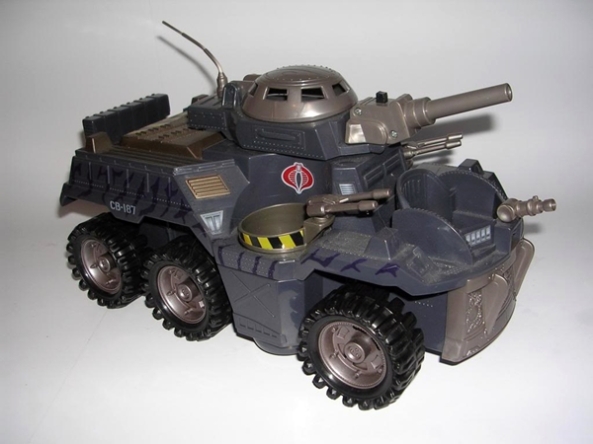 No packaged shot, as I’ve had this thing for quite a while. It was released as part of the SpyTroops line way back in 2003, and it’s one of the shining moments of what was largely kind of a dark time for GI JOE, at least in terms of my interest in the line. If you’re curious, it shouldn’t be too hard to find a shot of the box via the InterWebs, but it’s worth noting that like most vehicles in this series, it was released in what was basically a window box without the window. Yep, it exposed the toy to the elements, which often increased the chances of it getting broken, having kids stick gum to it, or just have the shit beaten out of it right there on the store shelf. I bought mine new and it was full of dust right out of the package. Fun!

The Ringneck is an armored transport and the main reason I love it is because it looks like something right out of World War II. It doesn’t really look like a Cobra vehicle, because it’s grounded too much in reality and it’s missing some of the Rube Goldbergesque stuff that Cobra engineers seemed to love. Yeah, there are a few odd gimmicks, which I’ll get to in a minute, but overall, it looks more like something you’d get in the Forces of Valor line than GI JOE.

The Ringneck rolls along on six heavy wheels and it features a main cannon attached to a great looking armored dome. The viewing slits and heavy riveting really give it that vintage vibe. There are also two smaller gun emplacements on each side. Pull the lever in the back and you can make the two gun emplacements swivel in unison while sound effects are activated. The main turret rotates and the cannon does fire a missile, but I removed mine a while back because I liked the exposed borehole of the barrel better, and now I can’t find it. As for the sound effects, I can’t remember what they are. The batteries in mine must have died a long while ago and frankly I’m afraid to open the compartment because the batteries in there have probably fused into one piece from corrosion. You can remove the two gun pods and set them up as gun emplacements, which seems like a really lame tacked on gimmick that I try to forget even exists. 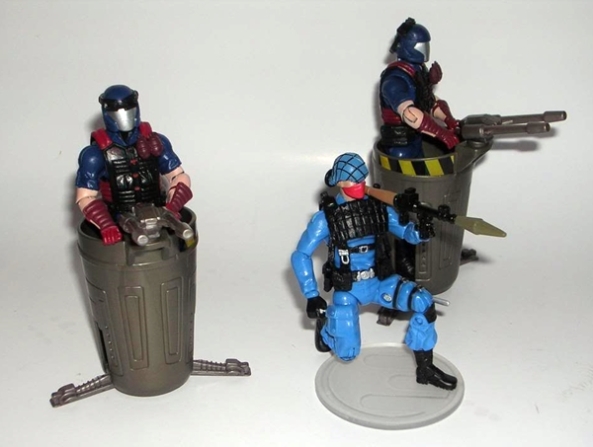 By design, the Ringneck holds four figures, with one riding in the main turret and one in each of the smaller gun emplacements. The fourth, which may be the river has the unlucky job of riding directly under the main cannon, while being the most exposed against enemy fire, and all he gets is this little pea shooter that must be hard to work with while driving. There aren’t any peg holes for other figures, but there’s plenty of room for troops to sit on the back and ride along.

The Ringneck came with a Neo Viper figure, which I’m sure I don’t have any more. At least I’m sure enough that I didn’t want to invest in a fruitless search through half a dozen totes of GI JOE figures. But that’s cool, because as far as I’m concerned, this thing belongs to my Battle Armor Cobra Commander.

I don’t know that the Ringneck is high on most fans’ lists of favorite Cobra fighting machines, but I really dig it. It’s a pretty simple toy and what gimmicks it does have don’t really wreck it in anyway. It’s also a really solid toy. You could probably roll this thing crashing off your front porch and it would come away more or less unscathed. As I mentioned earlier, SpyTroops wasn’t a stellar time for GI JOE figures in my book, but there were a handful of really good vehicles turned out around this time for both sides.