When Doctor Who returned back in 2005, he didn’t come back facing down the Cybermen or the Daleks or even the Sontarans. No sir, it was the Autons. Those loveable murdering hunks of plastic controlled by the Nestene Consciousness. Strange choice? I suppose. While The Doctor faced down the Autons twice in his third incarnation, they aren’t exactly the heaviest hitters in his pantheon of enemies. On the other hand, the legal rights to use the Daleks was still up in the air and you have to admit, as animated shop dummies, putting the Autons on screen doesn’t cost a lot. And making figures out of them ain’t too big a challenge either. As figures, the Autons came in two varieties. You could either buy one single carded, or you could get a two-pack. I’ve yet to pick up the single carded version, so today we’re going to look at the pair. Afterall, one Auton is company, but two’s an invasion. Ahem. 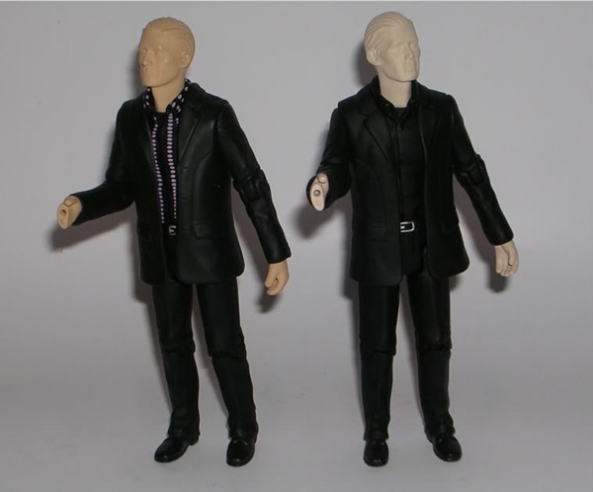 In case you haven’t already guessed, both Auton figures are the same sculpt, and just utilize slight variations in paint jobs in order to differentiate them. Actually, there are just a few extra paint apps on the shirt of one of the figures. This allows CO to milk the mold for every penny and let’s fools like you and I army build with ease. Both figures are wearing almost all black, with a stylish collared shirt and blazer. Afterall, chances are these guys stepped right out of through the front window at Harrod’s so it’s only right they should be dressed to kill. See what I did there? Yeah! 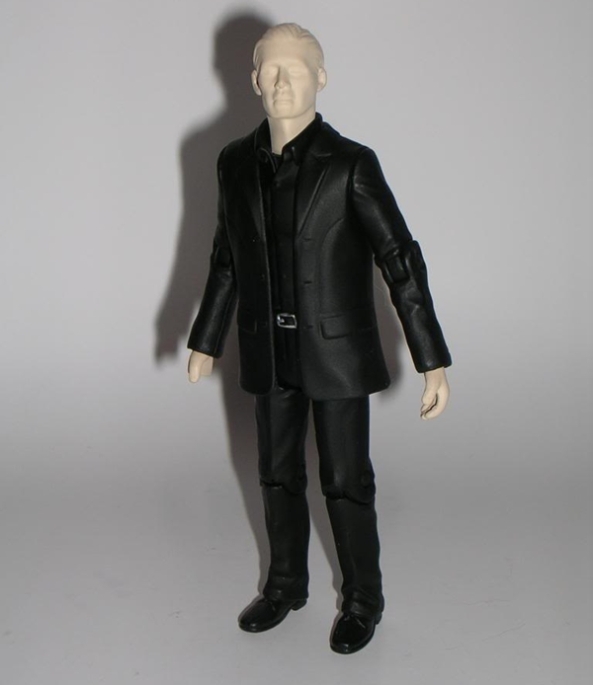 The head sculpts are left unpainted to make them resemble manniquins and they’re pretty creepy. One has a slightly darker colored head, which I’m assuming is to make them just a little bit more different. Of course, the Auton soldier’s main weapon is the blaster embedded in his right hand, which becomes active when the fingers in the hand flip down. Engineering a hinge on the figures’ hands probably wouldn’t have worked, so CO just had the front of the hand pull off to expose a hole that’s supposed to be the gun. In retrospect, I think it would have been better to leave the peg on the hand so it would look like the gun, but this way works ok, I guess. 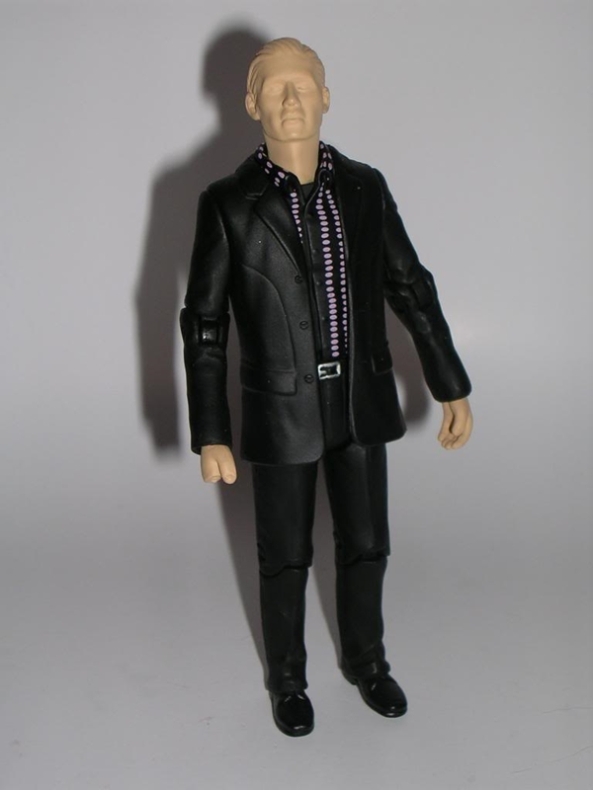 The Autons feature articulation that is a little less than what’s become standard for the Doctor Who line. The heads turn, the arms rotate at the shoulders and have hinged elbows. The legs rotate at the hips and have hinged knees. What’s missing? The swivels in the thighs and biceps. I’m thinking that tooling was left out to lower the cost of the figures for the two-pack. I don’t miss it all that much, since the Autons were supposed to be rather stiff and lumbering, rather than terribly flexible or agile.

So, The Autons aren’t what I would consider must-own figures in the Doctor Who lineup. That’s not to say, however, that I’m not happy to have them in my collection, particularly since this pair can really stand in for either the modern series appearance or even the appearance from the classic episodes. It doesn’t hurt that this pair goes for pretty cheap online these days, so if you’re looking for a new alien menace for your favorite Doctor figure, this is a pair that won’t break the bank.