In the last year or so, Character Options has become a lot more selective about how many Doctor Who characters get made into figures. I can think of at least ten figures that should have been made from Series Five alone and yet never were. But it wasn’t always like that. CO used to happily make figures of almost anyone and anything appearing in an episode. Remember yesterday’s feature with the Space Pig? But, if you ever needed a good example of how bat-shit crazy CO was about making Doctor Who figures a few years back, well here it is. The Empress of the Racnoss!!! 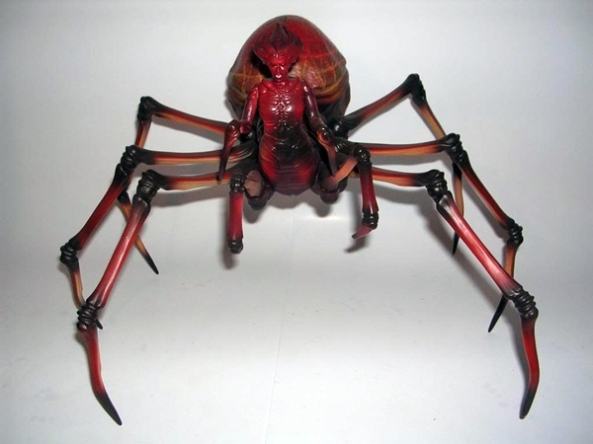 Featured in only one episode, and only appearing for a small portion of that episode, The Empress of the Racnoss was certainly an awesome looking alien menace. Part spider, part alien hell-bitch, she probably scared the poop out of any little kids that watched The Runaway Bride.Unfortunately, she’s also the only memorable thing about that episode, [Ok, so the TARDIS car chase sequence was pretty cool too. -FF] and as far as a nemesis for The Doctor is concerned, she was pretty lame. She stood there, made a bunch of really stupid puns that seemed completely out of place for such an alien creature and then ultimately either burned to death or got drowned, or maybe both, I can’t really remember. But it’s not the fact that The Empress got her own figure that’s so amazing, it’s how utterly gigantic this figure is, that really impresses. The packaging is long gone, but suffice it to say, she came in one pretty damn big window box. 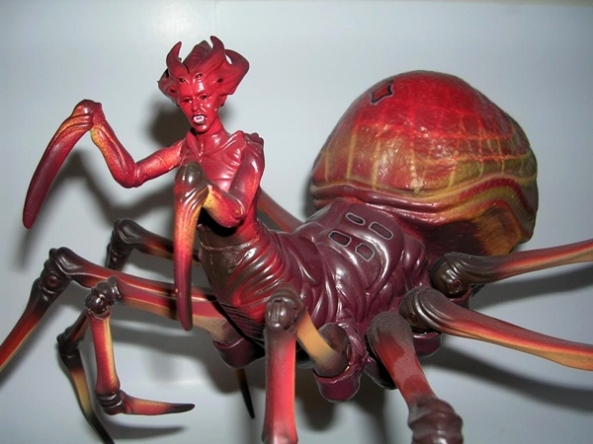 Out of the package, The Empress is impressive on every level, but let’s start with the size. The torso portion is the same size as any regularDoctor Who figure, so when you tack a proportionally sized spider body onto it, well, you get the idea of how big this figure is. When standing fully upright, you can easily stand a regular Doctor Who figure under her. No, she’s not quite to scale from the show, but I’ve got no complaints.

The sculpt and paintwork on this figure are both gorgeous. The headsculpt is one of CO’s best, right down to the multiple eyes and the finely detailed teeth. She has a pair of locust-like arms hanging off of her shoulders, in addition to the eight spider legs protruding from her giant body. The body is mostly hollow so the figure isn’t terribly heavy, and she’s got a huge web spinner on her butt.

The Empress’ legs are each fully articulated at the body and again at one of the mid joints. Her torso and head can swivel and her arms rotate at the shoulder. The leg joints are all tight, so the figure can easily stand up on her legs with no worries.

When The Empress figure was first released she came at a pretty hefty sum. Most e-tailers were selling her for $39.99. Now, I’m not saying that it wasn’t worth it, as this is a really nice figure, but it’s admittedly a lot to pay for a fairly inconsequential villain from a fairly poor episode. It wasn’t Fear Her kind of bad, but it’s The Runaway Bride is definitely not one of my go-to episodes when I’m looking for my Who fix. It didn’t take long for prices to get slashed, though, and nowadays you can still find this figure at some online retailers for about twenty bucks, and she’s definitely worth that. In fact, I really can’t recommend her enough. It’s just too bad she didn’t come with a dozen or so little baby Racnoss. I do, however, thank CO for not giving her a voice chip.

[It may be Friday, but Doctor Who week is going to cruise on through the weekend to properly celebrate tomorrow’s premier of The Impossible Astronaut and the kick off of Series Six. -FF]