Last Monday was a Matty Sale Day and Mattel had a number of items worth looking at. In addition to offering second chances on Beast Man and Gygor, the two new MOTUC figures were Man-E-Faces and Megator. Today we’ll start out with Man-E. He’s not one of my favorite dudes from Universe, but there’s no denying he’s a pretty high profile character and he was no doubt very high on a lot of collectors’ want lists, especially after getting releases like Battleground Teela and The Faceless One. Despite his demand, Man-E turned out to be a pretty easy figure to get, as he lasted a couple of days. He also came with a secret accessory! Oooh! What could that be??? 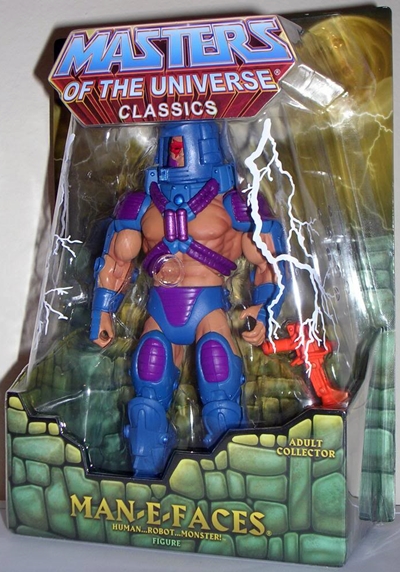 Man-E comes in the standard MOTUC packaging, which still looks everybit as awesome as it did last month, and the month before that, and so on. If I were a MOC collector, I’d be pretty pissed, though. My Man-E is packaged with his helmet askew, half turned to the side with his face barely visible. I don’t know how many shipped like this, but I do know a lot of collectors keep these carded. If you’re one of them, good luck. I hope your’s was packaged better than mine. The secret accessory is packaged under the insert so if I had avoided toy forums for the last bunch of weeks I would have been really surprised when I ripped open the package. But I didn’t. So I wasn’t. 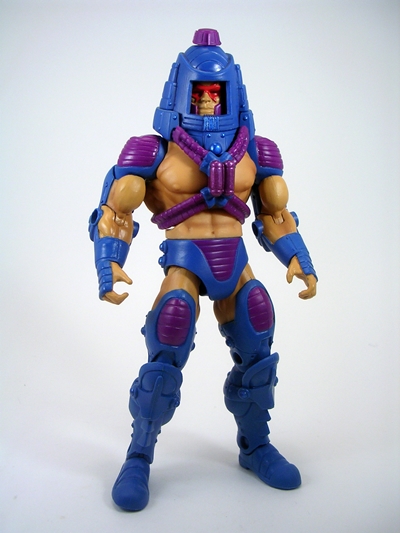 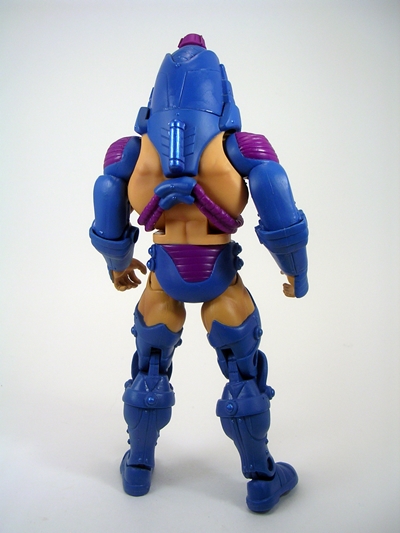 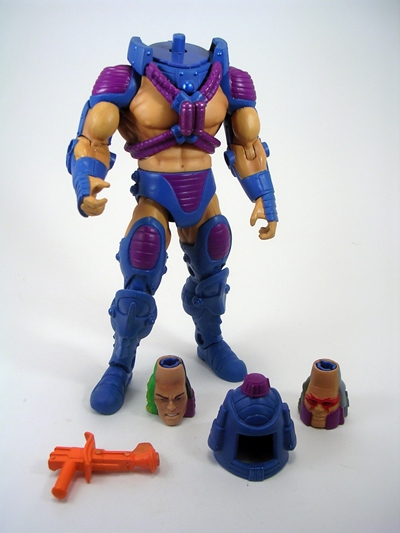 And there’s the Man… er, E-Faces. The keen eyed collector will instantly notice that Man-E owes his legs to Trap Jaw’s parts. You’ll also notice that Matty had to really rethink their “no gimmicks” rule with this figure, as by nature, Man-E is basically one big gimmick. So let’s get that gimmick out of the way first. In case you were worried that in order to change Man-E faces you’d have to take apart his whole head and put in a different face plate (I’m looking at you two, Battle Armor He-Man and Skeletor!!), fear not. Man-E’s gimmick works the same way it did on the vintage figure. You turn the knob on the top of his head and it rotates through the three faces: human, robot, and beast. The faces are a bit sunken into the helmet, but you can still see them pretty well and I think T4H did a fine job recreating each one for the modern line 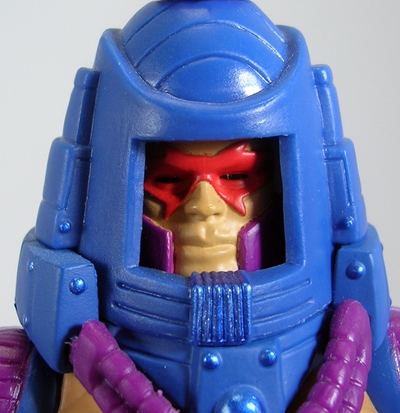 But wait… order now and you’ll get three more bonus faces! Now how much would you pay? Yes, the secret accessory is another head with three more faces. To swap them out you pull off the knob, pull off the helmet, swap the head plug inside and put it all back together. It’s actually much easier than it sounds. The new heads consist of He-Man, Orko, and Skeletor. Orko? Really?? I don’t tend to complain about extra accessories, but I can tell you right now that my extra Man-E head will be tossed into the bottomless pit of extra MOTUC accessories that I don’t give a shit about. I will also point out that the ability to swap out the heads made Man-E’s helmet a little unstable and bounces around while rotating the heads. In the end, I would have rather Matty nixed the extra head and permanently attached the helmet to the figure. See, the extra head is an example of the gimmick hurting the figure, and I thought that’s what Matty was trying to avoid. 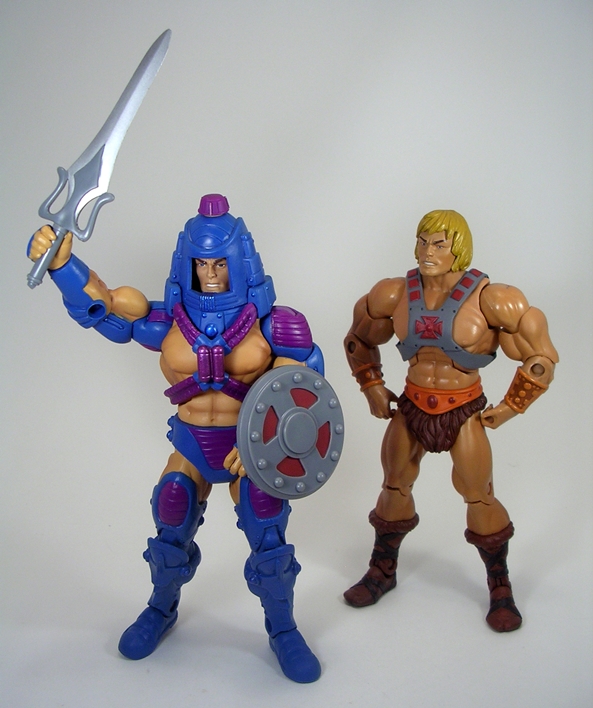 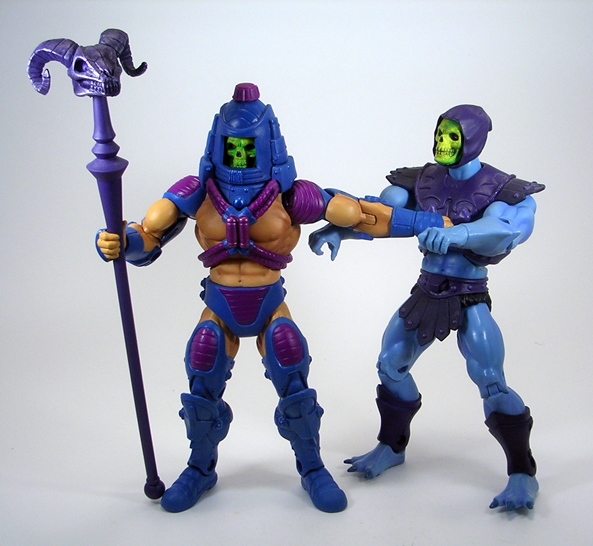 But enough about Man-E’s faces, the figure in it’s entirety looks fantastic. The sculpt and proportions are great and while I may catch some hell from purists about this, I am glad Matty went with the fleshtone rather than the more vintage color for his skin. The purple and blue used for his armor is a gorgeous combination and really makes the figure pop. In addition to the extra head, Man-E comes with his trusty orange laser pistol. It’s a new sculpt and I like it. 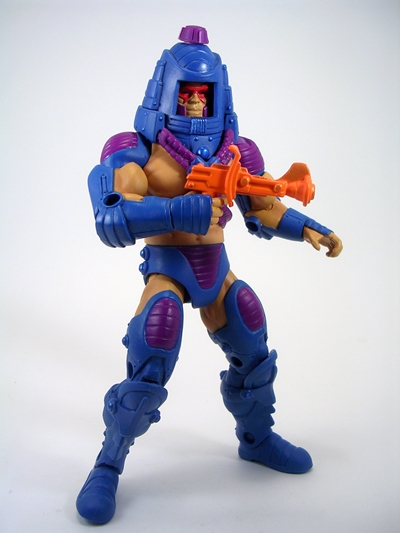 Men-E features fairly standard MOTUC articulation. The arms feature universal movement in the shoulders, swivel cuts in the biceps and wrists, and hinged elbows. The legs have universal movement at the hips, and hinges in the knees and ankles. The torso swivels at the waist and features the standard ab crunch. Obviously, his head doesn’t turn, at least not in the conventional sense.

It seems like I’m saying this a lot lately, but here’s another MOTUC figure where I don’t care so much about the character, but I absolutely love the figure. He has a great sculpt, very appealing colors, and an overall sense of great quality about him. As always, casual collectors will no doubt balk at the $20 plus shipping pricetag, but I tend to get more and more pissed over the shipping charges, rather than the $20 for the figure. Yep, as always, Matty, thanks for charging me $10 to ship a figure in a box with no packing and have it take almost 10 days to get to me. That’s quite a class act you and Digital River are running.