While I haven’t featured many of Koto’s line of Bishoujo statues, I really do dig them a lot. At any given time, I usually have three or four of these beauties on my want list. But because I’m not really a statue collector, these gals often get pushed down the line in favor of action figures. I’m going to try to remedy that neglect in the months ahead by finally featuring some more of the Koto statues in my collection and by throwing a little more of my collecting budget toward some of these awesome pieces. Today we’re checking out the regular trade edition of Black Widow, and she’s one of the few instances in which I actually prefer a regular edition collectible over an exclusive. I should note that this is the second time Koto has graced Black Widow with the Bishoujo treatment. This statue, dubbed the “Covert Ops Version” to distinguish from the original, features an all new original sculpt and conforms to the slightly larger scale of Koto’s recent releases. 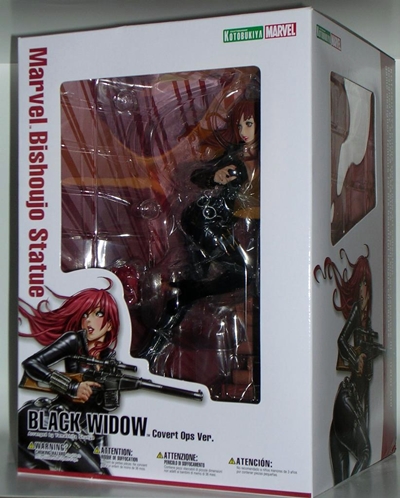 Black Widow comes in a window box, safely nestled betwixt two plastic trays. Yes, I said betwixt! But as is often the case with these statues, she’s cocooned in a lot of protective plastic wrap and comes partially disassembled, so it’s impossible to get the full effect without getting her out. The box design is fairly simple with a plain white deco and Shunya Yamashita’s original artwork. The box isn’t as flashy as the ones used for my Ghostbusters or Tekken statues, but it gets the job done and should you need to use it again for storage, it’s totally collector friendly.

Unwrapped and out of the package, you get the figure itself, the base, a swappable sniper gun hand, and Daredevil’s mask. Here’s where two of the differences between this trade edition and the San Diego Comic Con exclusive come into play. The exclusive version featured Hawkeye’s mask instead of Daredevil’s, and the swap out hand in the exclusive version features a combat knife instead of a sniper rifle. I could have gone either way on the mask, as either one is a nice little accessory, but I vastly prefer the sniper rifle over the combat knife.

Black Widow plugs into the base via a robust peg on the bottom of her left foot and poses seductively with one hand resting on a brick wall and her right leg drawn up at the knee as she looks back over her shoulder. It’s a great, dynamic pose, which manages to convey action while also allowing the figure to show off her lovely assets. The anime styled face is beautifully sculpted and features excellent, precise paint work. I love those big green eyes! The hair is convincingly sculpted to be blowing in the wind. I could argue that the hair could have used a wee bit more red in the coloring, but she still looks damn fine the way she is. 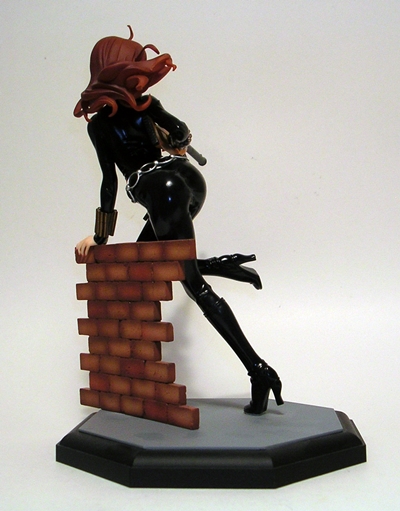 Her outfit is the other point in which this trade edition is distinguished from the exclusive. The SDCC version features a matte grey bodysuit, whereas this one is a high gloss black suit. No contest here. Not only do I prefer the more traditional black outfit, but the glossy finish on this statue is truly stunning, particularly the way it shines off of her ample booty. There, I said it. The detail work on the costume includes her wrist bangles and trademark belt, along with a partially unzipped zipper offering a token shot of cleavage. The sculpting on the outfit is capped off by some strategically placed wrinkles and even the seam lines where a suit this tight would presumably have been sewn onto her. Because Widow’s outfit is mostly black, there aren’t a lot of other paint apps here, but the silver on her zipper and belt is precisely applied, as is the little dabs of red polish on her fingernails.

As already mentioned you can choose whether you want to pose Widow with her right hand free or holding her sniper rifle. The hands pull out and plug in easily and the rifle is permanently attached to the one hand. I suppose the advantage of posing her without the rifle is a better look at the figure itself, but I still prefer her with weapon at the ready. 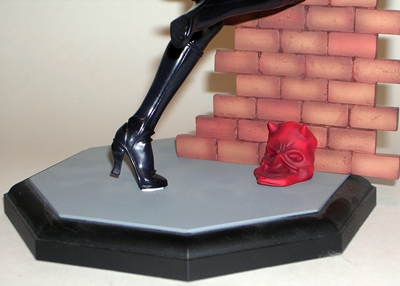 The base itself is simple enough. It’s a black octagon with a grey floor plate and a portion of a brick wall. The paint and sculpting on the wall is certainly convincing and as a whole the base accentuates the figure quite nicely. I am definitely partial to this sort of diorama setting over the clear base used on my Christie Montiero statue. The Daredevil mask is completely optional and is designed to be placed so as it is leaning against the base of the brick wall.

From the moment I got Black Widow out of the package I was instantly smitten with her. She’s a gorgeous piece of work and a lot heftier than I expected. I got her for only $45 and I still consider the Bishoujos to be among the best values in collectible statues around. If you shop around, you can even splurge for the SDCC version and still probably come in at under $75. Either way, I can’t recommend her enough, whether you’re an age old fan of the character or have recently been introduced to her through The Avengers, this statue represents a great take on her and a beautiful piece of work.