I would understand if readers out there assumed that I stopped collecting Marvel Universe figures. The last time I looked at one was way back in November 2012 and I haven’t bought any until now. The truth is, I can’t find any on the pegs around here, and I refuse to pay a premium for them online. Here’s a novel idea, Hasbro, why don’t you sell the current figures on your website instead of listing them as sold out. Don’t you make these goddamn things? Haven’t you now missed profit goals and laid people off for the second fiscal period in a row? Don’t you want to sell them and make money for your shareholders and keep jobs for your employees? I can sort of understand the problem with retailers not having them, what with distribution issues or peg cloggers, but these are YOUR figures and YOUR website. Put enough of the current releases on your web store so people can buy them and you make money. Simple enough? Anyway, at least I’ve found that if I’m patient, Hasbro’s online shop finally gets enough of the older figures I missed out on so that I can rack up enough to get free shipping. I guess I have to be happy with crumbs. Ok, enough rant… today we’ll start with Kang.

When you drink as much as I do, you get distracted and confused rather easily, hence the empty package picture. At some point when I was heavy into the Jameson, I likely muttered something like, “c’mere Kang, you’re the only one who understands me” and ripped him open, oblivious to the fact that I hadn’t yet taken a packaged shot. Remember kids… booze makes you stupid. But it also silences your demons, lets you fall asleep, and helps you to cope with life. Forget Kang, booze, you’re the only one who understands me.

I’ve got to admit, as much as I sometimes hate to collect this line, it feels great to be holding a new figure, especially one that’s pretty far up on my Want List. The packaging is the same as we saw last time, with the jagged bubble and the “Collectible Comic Shot” which is just a tiny piece of cardboard with a comic cover printed on it. You’ll also note he’s called “Marvel’s Kang” which is Hasbro’s way around copyright issues. I question, why not just go with “Kang the Conqueror?” Surely they could copyright that and it sounds much better than the alternative. Oh well. I don’t think Kang’s character art is among the best the line has offered, but it’s still pretty cool. The back of the card has a little bio and MODOK taunting you to collect them all by reworking the acronym for his name. Fun!

Let’s break Kang down into two categories: one good, one bad. If we’re dealing with the sculpt and the paint, he does very well. Check out that head sculpt, it’s fantastic, and I really dig the way they made the cowl and helmet two pieces. Instead of just a standard, painted buck, Kang’s got a loose fitting tunic. It looks like the torso could be from Dr. Strange, but if I’m not positive at a glance, than that’s good enough for me. The bottom of the tunic is part of the new belt and he’s got some bitching thigh-high future despot boots. The coloring on the figure is just as good. His amazing future suit is green with subtle and effective wash. The boots, gauntlets, helmet, and cowl are all metallic purple, and his face is a great shade of blue. No doubt, Kang is a gorgeous little figure. Oh yeah, he comes with a gun too! 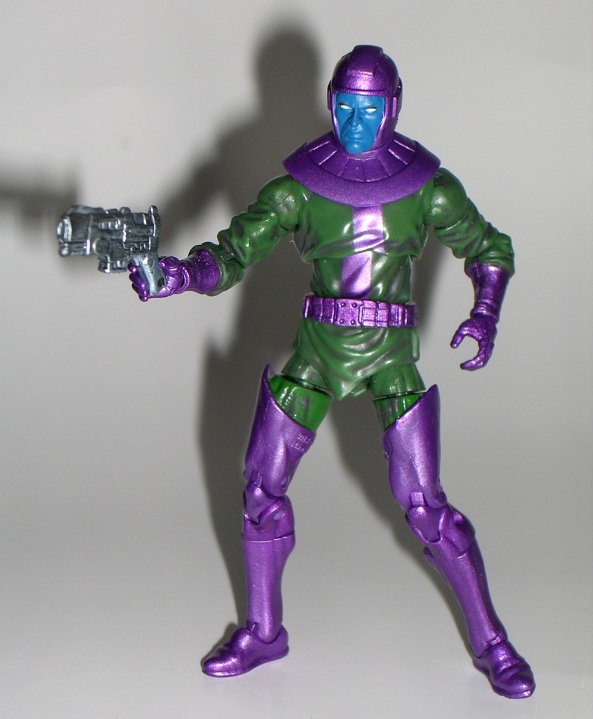 Ok, now the bad stuff… quality control! For starters, the swivel cuts in the thighs have huge caps in them. I could already see them before I took the figure out of the package. It’s bad enough that I probably would have left him on the peg if I were buying him in the store, but since he was a web order, I didn’t know until he was already in hand. Trying to screw them tighter helps a bit, but eventually they return to their natural state, leaving those annoying gaps. Next up, his legs are pretty messed up out of the package. This issue I’ve managed to fix a bit with a blow dryer, but it pisses me off that I have to. He’s not even in any kind of dynamic pose in the package. It’s just god awful cheap plastic. Hasbro, if you’re going to send out figures like this, at least start putting stands in the packages again.

In terms of articulation, Kang doesn’t disappoint. You get ball joints in the neck, shoulders, hips, and wrists. He has hinged elbows and double hinged knees. There are swivels in his biceps, thighs, and just under his knees. His ankles feature regular hinges as well as lateral rockers, and he has a ball joint in his torso. Not bad!

Remember how I said that sometimes I hate collecting this line? Kang is a great example of why. Hasbro delivered an amazing looking treatment of the character, but when you get down to the QC issues, he sure doesn’t feel like a ten dollar figure. Overall, the great paint and sculpt wins the day and makes me happy to have him in my collection, but in the unlikely scenario that I actually see him on the pegs, I’ll likely try to look for an upgrade without the big gaps in the thigh cuts. I shouldn’t have to do that, but it is what it is.