A couple of weeks back I promised I’d be hunting down more Vintage Collection Skiff Guards and I have indeed done just that. If I promise you I’ll take out the garbage or leave the toilet seat down, I’m probably lying, but a promise to buy new toys is a promise I always keep. The next two nefarious sand pirates to join my crew are Weequay and Wooof. Wooof? WOOOF??? This guy is Klaatu. What the hell is this Wooof nonsense all about? Well, in a flurry of Jameson-fueled irritation, I found my way to a wiki article that is telling me that he was called Klaatu but then the original production name for him was Wooof, but then it says they were two different characters, and now I’m just as confused and back to just saying screw it… I’m calling him Klaatu. It helps that I got him loose, so there’s no evidence he was ever named Wooof.

So, I’ve got no card to show you for Klaatu, but there’s Weequay’s card. As you can see, this isn’t the imposter, known as “Skiff Master Weequay,” that we looked at last time. No sir, this is the Weequay I grew up with and the one that will always have a special place in my fanboy heart. Look at him standing there proudly on the bow of his skiff. So noble… so magnificent… so Weequay! Since time began, Weequay figures have been sculpted with only one thing in mind… to hold their force pikes across their chests and mimic that… dare I say? Iconic pose. But now we finally have an articulated version that can do so much more. Let’s get him open and check him out… 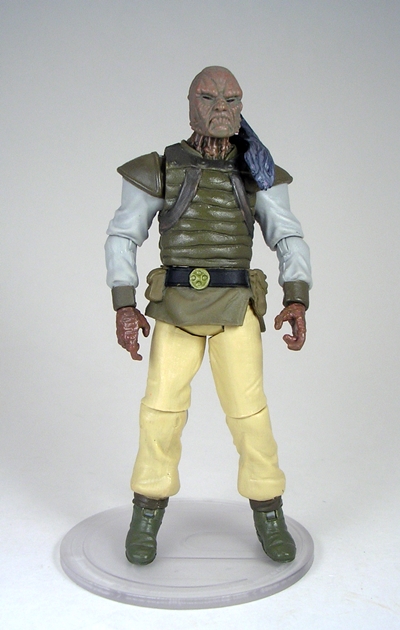 Weequay has always had pretty good figures, and the Vintage Collection version just does some fine tuning. He’s not the most intricately sculpted of the Skiff Guards, but that’s more on his character design than anything else. Weequay sports his trademark ribbed brown leather vest with shoulder guards and a simple belt with some sculpted pouches. There’s no functional holster, but in fairness the on screen character didn’t have a holster either. 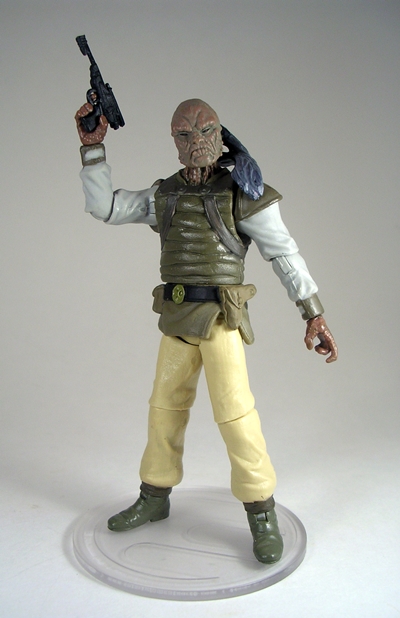 The head sculpt is fortified with all that raisin-headed goodness that I expect from my Weequay figures. He looks perpetually pissed off, as if letting us know that even an awesome job where you throw prisoners into giant sand vagina monsters can get to be a chore after a while. As with Skiff Master Weequay, I think Hasbro could have done a better job sculpting his braids, but they’re not bad. Weequay’s articulation includes ball joints in the neck, shoulders, elbows, knees, and ankles. He has a T-crotch, swivels in the wrists and he can swivel at the waist. He comes with his pike and a hold out blaster. Well done, Hasbro. 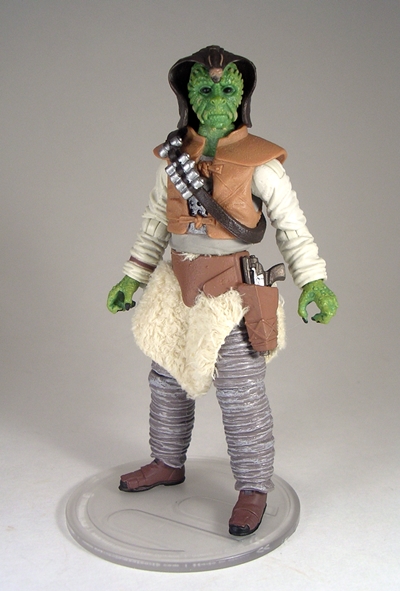 And then there’s Klaatu. I gotta tell you, Hasbro went above and beyond on this guy. The head sculpt is fantastic. It’s as expressive as you can get from a lizard man in this scale. His vest is sculpted over an armor plate and his belt secures a softgoods skirt that looks like it’s some kind of crazy Tatooine goat hair, but I’ll concede that it’s probably not. 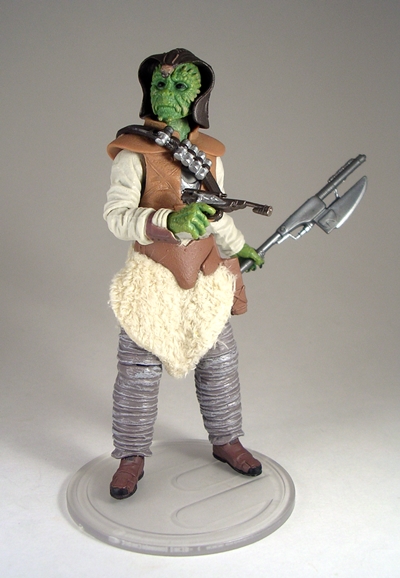 Klaatu features a removable hood, a removable bandolier strap, and a functional holster. Hooray for functional holsters! He comes with the same force pike (but different paint job) as Weequay and a very cool hold out blaster. Klaatu features ball joints in his neck, shoulders, elbows, knees, and ankles. He has a T-crotch and he has swivel cuts in the waist and wrists.

Weequay and Klaatu are a seriously cool pair of figures. If the Vintage Collection’s aim is to produce truly definitive versions of characters, Hasbro certainly succeeded here. Granted, I’m a little biased since I love the Sarlaac sequence in RotJ so much, but it’s just great to see these guys get such amazing figures. I grabbed them for ten bucks each and now my Tatooine Skiff is just that much nearer to being fully crewed. That leaves Kithaba and Nikto and I’ll be checking them out next week.