Here’s one that’s been on my want list for a long time. She’s also been sitting on the shelf at my local comic shop taunting me to buy her every time I go in for a visit. Sure, she’s about ten bucks more there then I could get her online, but my last visit just seemed like the right time to pull the trigger. And I’m fine with dropping an extra tenner on a collectible if it means supporting a small business. Anywho, Wonder Woman happens to be one of my favorite books in the New 52 and I’ve recently picked up the first two collected volumes in hardcovers. I’m enjoying revisiting them just as much as when I went through these twelve issues for the first time on my Kindle. That probably explains my sudden incentive to finally buy Koto’s Bishoujo statue. Sure, this is Wonder Woman before they put her in pants in #600, and then changed her up again for the New 52 Reboot, and that’s cool because as much as I am enjoying her new book, I still dig her more traditional look best.

Alas, your pal FigureFan was hitting the Jameson pretty good the other night and decided to open her up before taking the in-package shots. Sure, she’ll go back into the box, but I didn’t feel like putting her back in once I had her on my shelf. Besides, you get the idea. The presentation here is very standard for Koto’s Bishoujo line. You get a box with windows on two sides, as well as on the top. The other panels consist of a mix of the original art design for the statue and some photographs of the actual piece. There’s also a blurb about Wonder Woman and the statue on the back. The box lets you get a passing look at what’s inside, but she’s wrapped in plastic and sandwiched between two plastic trays, so you’re not yet seeing her at her best. There’s also some assembly required on this piece, so you really need to bust her out of there to fully appreciate what you’re getting. As always, the package is collector friendly. My statue’s box is a little rough around the edges, but I think she’s been banging around that comic shop for quite some time. 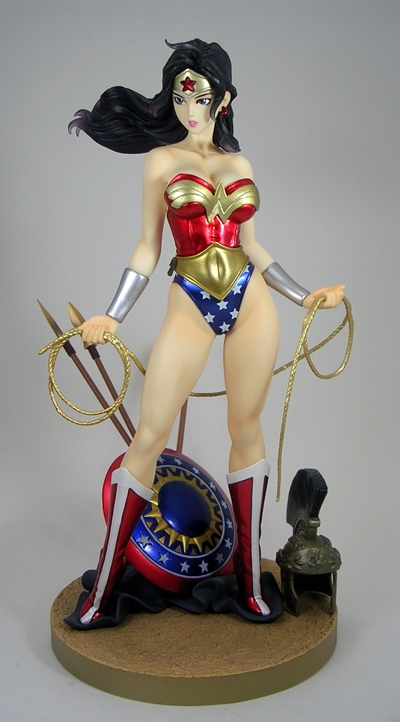 What sort of assembly is required? Well, Diana comes already affixed to her base. You just need to put her lasso in her hands and place the spears and helmet on the base. The way the lasso works is very clever. Each of the loops has a break in the top with each side pegged to go into her hands. The result is an effect that actually looks like she’s holding a coiled rope, when in fact it’s all cool fakery. The spears are inserted into tiny slots in the cloak behind the shield. The helmet doesn’t peg or fasten down in any way so you can just place it anywhere you like, or leave it out entirely if you prefer. 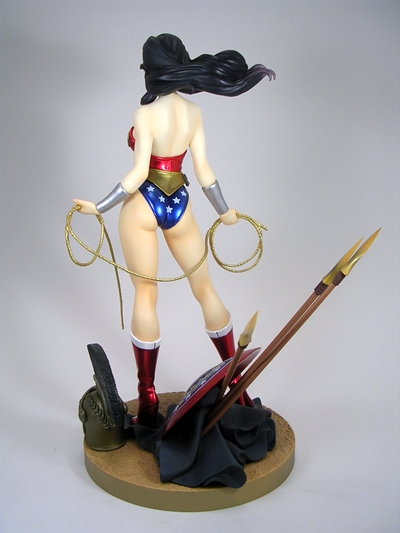 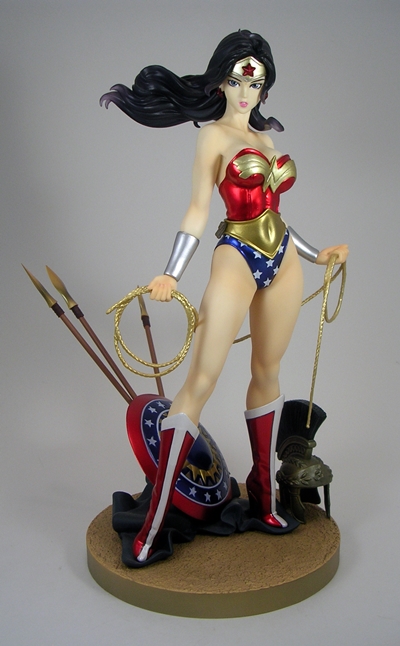 Out of the box, all assembled and hot damn, this is one gorgeous statue. The pose is very simple, with WW standing tall and favoring one hip ever so slightly. Her arms are held out at her sides, clutching her golden lasso, which runs behind her back. Her head is cocked a little down and to the right. In theory, I like the positioning of the head, but it does mean that you really need to pick up the statue and peak underneath to get a good look at her face. The face is classic Bishoujo, enhanced by some exceptionally well-sculpted hair blowing off to the side. She’s also wearing her trademark gold tiara and she even has a pair of red star earrings.

WW’s body type is just the right balance of power and femininity. She’s definitely all woman. Koto was extra generous with her upper assets, but that’s to be expected with these statues. The enhancement is noticeable, but not quite taken to ridiculous proportions. Her skin is beautifully sculpted and has that great, soft and realistic texture that Koto manages to nail on these statues every time.

Of course one of my favorite things about the Bishoujo statues is the way Koto contrasts the soft skin tones of the ladies with the costumes and this statue is no exception. WW’s one-piece outfit is exquisitely reproduced and uses some of the most gorgeous metallic red paint that I’ve ever seen. It’s so vibrant, it makes the metallic gold look somber by comparison. The blue is no slouch either. The same luxurious red is used for her high heeled boots. There are some brush strokes showing up on the white of her boots. It doesn’t detract much from the statue, but it’s conspicuous just because the paint on my Bishoujo statues is generally peerless.

You never know what Koto’s going to do where the base is concerned. It could be anything from a simple disk to an all-out environment and Wonder Woman’s base is pretty elaborate. The disc is sculpted with a rough ground texture. On it is a sculpted, crumpled cloak with a beautifully painted shield resting on top at an angle and the aforementioned spears protruding from behind it. If there’s one gripe I have about this statue, it’s the layout of the base. The spears stick out pretty far beyond the back of the base, meaning this piece takes up a lot of precious display space. If you have a place of honor for the statue and planning on displaying her alone, it’s probably not that big a deal. On the other hand, if you are adding her to a somewhat crowded shelf of other statues, you may want to consider removing the spears to economize your space. Also, while the helmet is an extremely nice piece, but it because it doesn’t attach to the base I tend to forget it’s going to fall off when I pick up the statue.

I’ve only been collecting these statues for a little over a year, but my collection is growing and I have to say Wonder Woman is probably my favorite one on the shelf right now. It may just be that I’m smitten by “new purchase” love, but I think she’s going to stand the test of time. As with Power Girl, I think Koto was able to deliver the bishoujo style here without compromising one iota of the character. It’s a totally iconic piece, and those are the ones that I love the most. I tend to forget how much I enjoy these statues until I actually get a new one and then I fall in love with the line all over again. There are a couple more sitting at the comic shop, and I’m really tempted to drive over there next weekend and give them a home as well.