Ok, here’s where we separate the boys from the men, the dabblers from the collectors. It’s an action figure of Monsieur Mallah. Who ever thought it would come to this? I never dreamed Matty would ever have the balls to do a release like this one, but they upped the game. They said, “Oh? You like DC Comics? You like to get some action figures based on characters in some of those comics you read? Get a Superman or a Batman? Hmm? Maybe get some backbenchers? Some B-listers and C-listers. Hmm? Make you feel hardcore?” (If you didn’t read that in Stewie’s voice you’re doing it wrong) “Well how about this… we’re making Mallah and The Brain, muthf’ckers!  Are you hardcore enough to put that on yo’shelves?” Well, I guess I don’t have any choice, because they’re the Sub Exclusive. I’ll confess I am inexplicably delighted at this release, not for any overwhelming affection for these characters, but just because they’re such an unlikely release, I need them in my collection. 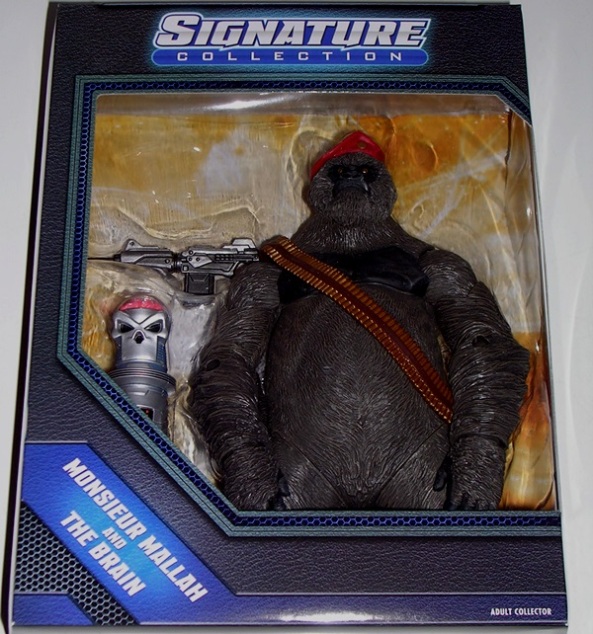 The occasional enemy of the Doom Patrol and Teen Titans, this pair comes in a large and wide window box, similar to the one that housed Metron and his Mobius Chair. I was actually surprised at how big the box was, mostly because The Brain is much bigger than I expected him to be. As always, the box shows off the figures quite nicely, with Mallah’s gun mounted behind his head, but still visible above The Brain. The character art is solid, but probably not among the best we’ve seen in this series. I guess when you’re drawing a gorilla wearing a beret and a bandoleer strap of ammo, and holding a brain in a cybernetic container, you don’t feel the need to go all out. I also noticed the bio didn’t mention anything about the romantic connection between these two. It’s possible that Mattel left that bit out because they didn’t want to be responsible for people’s heads exploding when they read the package.

Let’s face it, there’s no shortage of action figures of gun-toting gorillas wearing berets on the market today, and yet Mallah still manages to stand out. The realism of the sculpt is dead impressive. The stoic determined expression of the sculpt is only to be matched by the amazing paintwork on the eyes. You’d think the initial reaction to seeing an ape in a red beret would be comedy, but Mallah pulls it off with quiet dignity. No, my first reaction to seeing Mallah would not be to laugh, it would be to shit my pants and run. In any event, this figure is gorgeous.

Mallah’s body is recycled from the DCUC Collect & Connect Gorilla Grodd. What? You didn’t expect Mattel to churn out an entirely new gorilla body, did you? It’s a good reuse of that figure, and since I sadly don’t own a Grodd, it won’t be apparent when Mallah is displayed on my shelf. The body is big and powerful and the sculpted hair and feet and hands all match the convincing realism of the head fairly well. Mallah’s ensemble is rounded out with the belt of ammunition that hangs loose over one shoulder and a rather unique looking machine gun. Once again, I’m quite impressed with the work Mattel did on this guy. 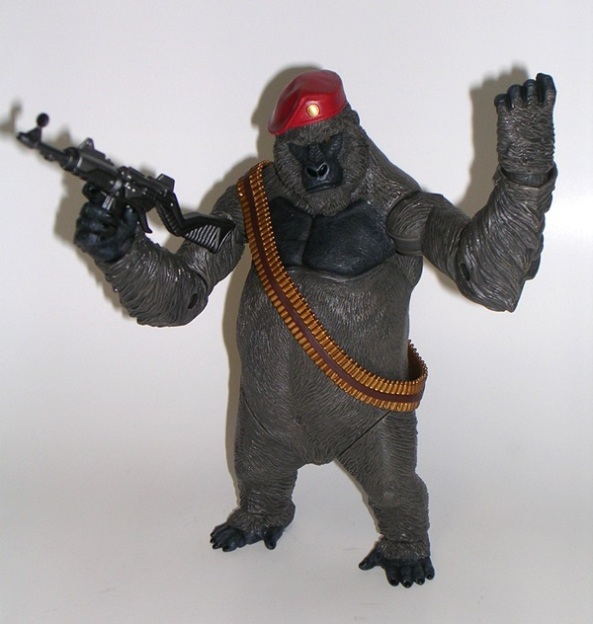 Being a giant gorilla, Mallah’s articulation is a little different from your average DCUC style figure. He has no torso articulation at all, but I wouldn’t have expected it. I can’t imagine the engineering it would have taken to get an ab crunch into this beast. His neck is ball jointed, and offers a nice range of motion. His arms are ball jointed at the shoulders, have swivels in the biceps (suck on that, Larfleeze!), hinges in the elbows, and swivels and hinges in the wrists. His legs feature swivel cuts up at the hips and again at the ankles. 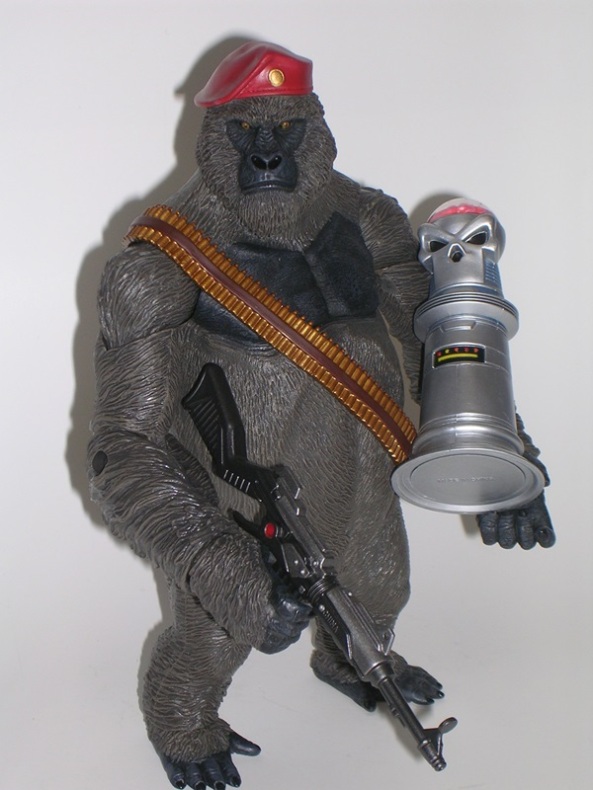 And then there’s The Brain. Obviously, this is more than an accessory than an actual figure. It’s just a silver tube with some sculpted detail, a skull like face, and a clear dome housing… well… the brain. It’s a nice looking piece, but it is greatly at odds with the artwork used for the packaging. It seems like Mattel neglected to get everyone on the same page for this one. Nonetheless, it’s fine for what it is and Mallah can certainly hold it fairly well.

I really think Mallah and The Brain was a great choice for a Sub Exclusive. If you didn’t Sub, you aren’t missing out on a crucial character, but you are missing out on a great figure. Sure, there are plenty of more important characters that need to be made, but Club Infinite Earth has been filling its share of holes, and I’d argue that this pair is exactly the sort of thing that the Club should be working on as well. Mallah represents a logical reuse of parts combined with some new sculpting that results in a truly fantastic looking figure that I’ll be happy to put up on my shelf.