I’ve taken care of most of my new receivings for the week already, so today I thought I’d do a Toy Closet Find and then for the rest of the week I’m going to be dredging out some older DCUC figures. But Hellboy 2, really? I know, right! I spotted this guy on the top shelf of one of the bookcases in my library and decided he needed his day in the sun, especially since there has been a little buzz lately about a possible third film. Despite being a comic junkie, I don’t think I’ve ever actually read a Hellboy book. That having been said, I enjoyed the movies, probably mostly because I really dig Guillermo del Toro’s flicks, particularly the creature designs. I didn’t pick up any of Mezco’s other Hellboy 2 figures, but when I saw The Angel of Death here, well I couldn’t resist him because he was my favorite creature design in that movie. I mean… how can you not love this…

Yeah! That right there is some good old fashioned nightmare fuel. The packaging is long gone, but let’s just say he came in a window box and get right to it.

The sculpt here is really spectacular, especially considering the body is rotocast. The body and cloak are just like a hollow cone, but it suits the design well. One of the creepy things about this guy is you can’t really tell where his body ends and his cloak begins. The fractured, eyeless face is awesome as are all the little sculpted teeth. Creepy! The massive wings are truly breathtaking. Every single feather is meticulously sculpted on both sides. I think Mezco might have gone a little overboard on the size of these babies, but they’re so majestic looking on the figure, I’m not complaining. 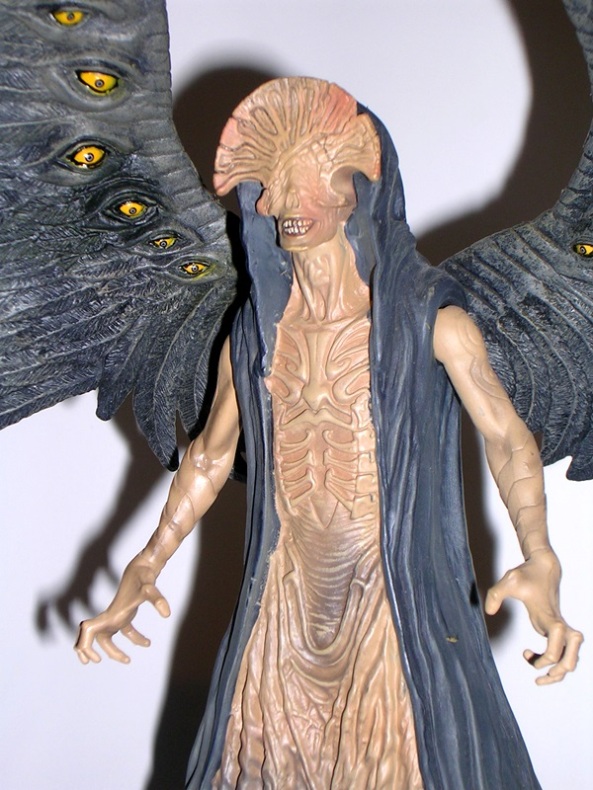 The paintwork on this figure isn’t exactly dynamic, but it’s not supposed to be. He’s brown, he’s dark grey, and lighter brown, and the eyes in the wings are painted with a high gloss to make them stand out. Overall, he looks ancient and dusty just like he’s supposed to. 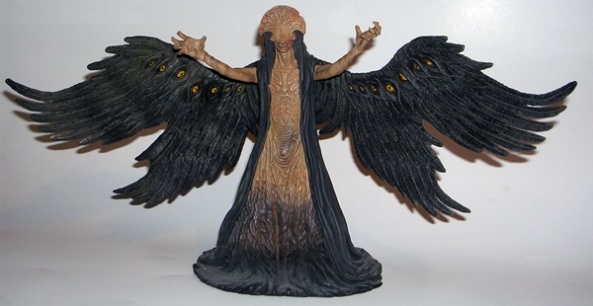 Ah, but is he an action figure or a statue? I’m not a fan of arguing semantics, so let’s not try to pigeon hole him. Because of his teepee style construction, Death’s only articulation is in the arms and wings. His arms are ball jointed at the shoulders, whereas his wings have hinges and ball joints. There aren’t a ton of poses to work with here, but you can tinker a bit. And herein lies my one complaint about this guy. The wings are designed to be removed, as they are off the figure in the package. As a result, the ball joints have a problem holding their massive weight. It’s not uncommon to find his wings in a different position a few hours later because they droop. It’s a little unsettling when every time I look at this thing its wings are in a different pose than I last left it.

Mezco does nice stuff, and I’m sometimes surprised that I don’t own more of their collectibles. It wasn’t until their Mega Scale Thundercats that I really began to take notice of them. I think it has a lot to do with a general lack of interest in a lot of the licenses they’ve secured. I don’t remember how much I paid for this thing, but I think I picked it up at one of the big bookstore chains and I’m pretty sure it was deeply discounted. I’m finding more and more that Books-A-Million and Barnes and Noble are good hunting grounds for toys and collectibles. You don’t think to go there to buy this sort of thing, and since nobody else does either the stuff tends to sit around and go clearance. Either way, it’s a nice one-off piece that fits right in displayed on one of my shelves of old and out-of-print occult books. Few guests that I have over that see it know what it is, but most agree that it looks damn cool.

4 comments on “Hellboy 2: The Angel of Death by Mezco”