Folks, I’ve got Star Trek on the brain this week. What with the new movie opening this past weekend, I wanted to balance it out with some Classic Trek cinema, so I busted out my Wrath of Khan Blu-Ray and now I’m all ready to talk some Trek toys. So, what the hell, let’s call the rest of this week Star Trek Week! To kick things off, we’re going to Art Asylum and their line of figures based on the second and greatest Trek movie of all time. And who better to go with than the hero and the villain of the piece. I’ve had this pair for a little while now, and I decided the time was right to open them up and get them on display. Today we’re going to check out Admiral Kirk and tomorrow we’ll swing back with a looksee at his nemesis, Khaaaaaaaaaaaaan. 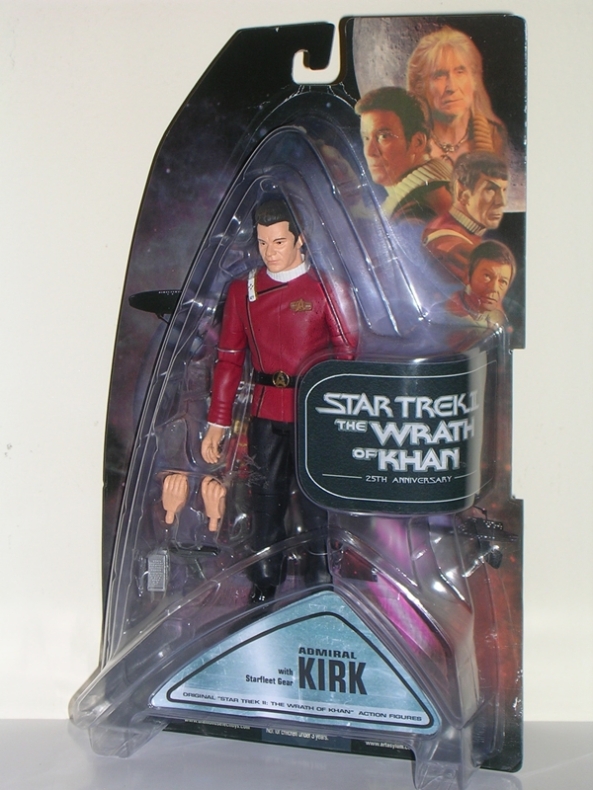 I really dig the packaging here. Kirk comes on a huge card with a bubble shaped like the familiar Starfleet insignia. To the left of the bubble is an illustration of The Enterprise and to the upper right corner is a nice piece of art depicting Kirk, Spock, McCoy, and Khan. The artwork almost has a vintage feel to it, which really fits the flick incredibly well. It just reminds me of early 80’s movie poster art. The bubble has an insert with the 25th Anniversary (holy shit, I’m so old!) Wrath of Khan logo and another insert with Kirk’s name on it.

The flipside of the card shows stills of the characters that are available in Series I and II. It also taunts you with the fact that four members of the bridge crew are SDCC Exclusives and so if you want them you’re screwed. Actually, you can still nab some of these figures for around $30 on Ebay from time to time, but others have crept closer to that three-digit mark. Suffice it to say if you’re looking for a full set, you better be ready to dig deep. Ok, let’s bust out Kirk and check him out…

Hot damn, I adore the Classic Trek movie uniforms: The burgundy tunic with that front flap, the shoulder strap with the rank insignia medal, the gold plated Starfleet insignia on the breast and matching belt buckle. These uniforms were clearly the pinnacle of Starfleet fashion design and I remember being so disappointed when The Next Generation premiered and dragged Starfleet kicking and screaming back to jumpsuits… although, I eventually succumbed to their old school charm. Anyway, this figure does the uniform justice in every way. The black piping is sculpted into the tunic, as is the seam running down the center of the chest. The insignia are painted onto the arm band and the sculpted Starfleet insignia on the left of the chest and on the belt buckle are both things of beauty. Overall, the paintwork is solid, and I like how they used matte black for the pants and high gloss for the boots.

You may recall a while back I looked at “Regula-1” Kirk from the same series and I was less than impressed with the head sculpt. Well, regular Kirk here uses the same head sculpt. It isn’t terrible, but there’s something definitely off about it. I think it looks like much older Shatner. His eyes seemed to get squintier the older he got, and that’s what I’m seeing here.

Kirk features decent enough articulation. You get a ball joint in the neck. The arms are ball jointed at the shoulders, hinged at the elbows, and swivel at the biceps and wrists. His hips feature a standard t-crotch, his knees and ankles are hinged, and he has swivels in the lower thighs. I’m glad they didn’t go for any torso articulation, as it would have messed up the look of the tunic. Speaking of the tunic, because the lower part of it is made of rubbery plastic, Kirk can actually sit down. I am, however, somewhat hesitant to leave him in a sitting position, since it will likely crease the plastic. It’s not like there’s a proper movie captain’s chair for him to sit in anyway. Although, the Defiant chair that came with Playmate’s 5” Sisko will work in a pinch. 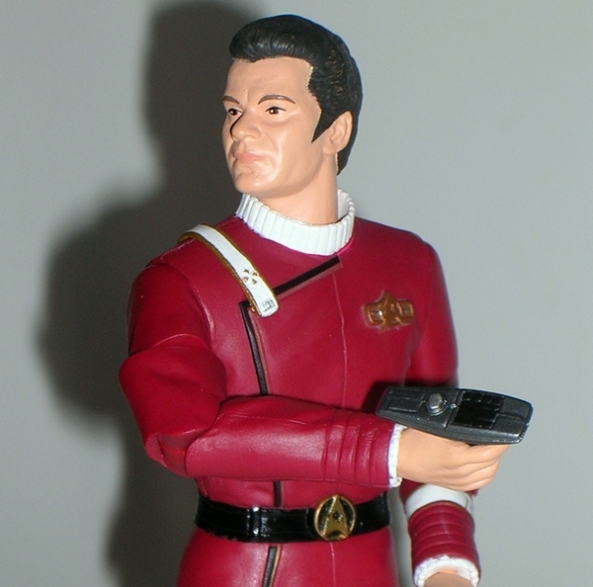 Kirk comes with an extra pair of hands and the basic Starfleet gear: A phaser and a communicator. The hands are nice, but I didn’t find them really necessary. I use the ones designed to hold his equipment and don’t bother with the others. Both pieces of gear are nice tiny representations of the props in the film. I’m pretty fond of this model phaser, and this one appears to be a repaint of the accessory used for the Admiral Kirk figure from The Motion Picture. The communicators in Wrath of Khan, on the other hand, were shit. In fact, they were probably the only bad thing about that entire movie. Seriously, how did Starfleet go from using wrist communicators in TMP to these ugly behemoths? They look like some kind of scratch built transistor radios. 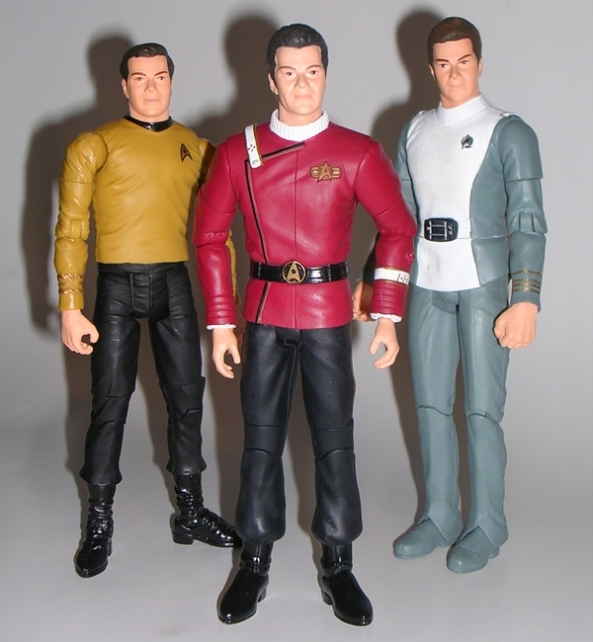 And that’s Admiral James T Kirk. He’s a really nice figure. The portrait of the head sculpt could have been better, but it’s not a deal breaker. He’s also one of the WoK figures that won’t cost you an arm and a leg. I got mine at a Toy Show for $20, which is about right. And, if one Kirk isn’t enough for you, you can also track down Kirk with the bloody handprint on his tunic, put there by Scotty’s dying nephew. Hey, Scotty, the dude is dying… WTF did you bring him up to the bridge for? Take that shit to Sickbay and maybe he’d have a chance to live. Oh yeah, there’s also another variant with Kirk doing the Khan scream. Happy hunting! Tomorrow, I’ll be back with the most Noonien of Singhs… Khan himself.