Ok, let’s kick off this DC Week… Jack Kirby and 1972: Both are awesome. 1972, because that’s the year I was born, and Jack Kirby because… well, he’s Jack friggin Kirby… architect of so many of the fictions and characters that I have consumed and loved since I was a child. Of course, 1972 was the year that Kirby created Etrigan, a great character, albeit one that Kirby reluctantly nurtured. He’s been missing from my DCUC shelf for far too long. These past few weeks, I’ve been filling the holes on my DCUC shelf via the Ebays, and Etrigan was one of the first characters that I went after. And so, for today’s feature, we part the veil of time itself and journey into the past… taking us all the way back to the beginning… DC Universe Classics… Year One… Wave One… Insert dramatic lighting crack here! 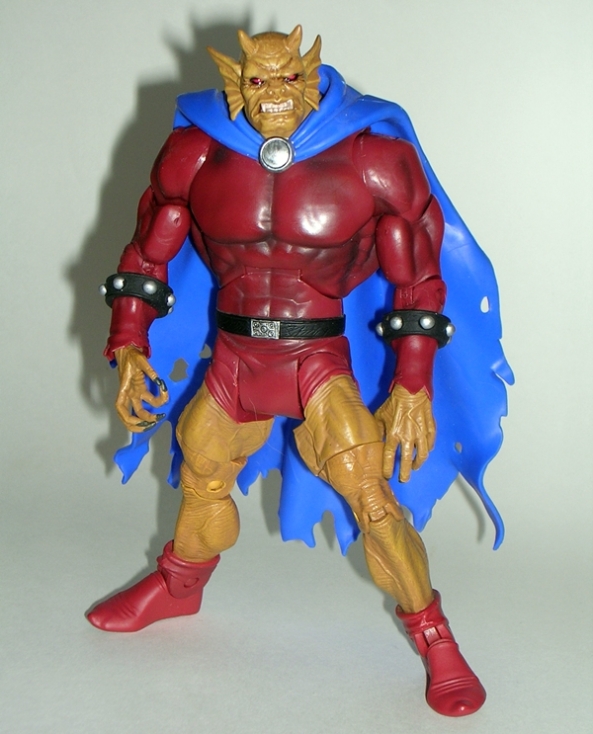 I picked this guy up loose, so there’s no packaged shot, but DCUC’s packaging has only gone through superficial changes throughout its twenty wave lifespan, so we aren’t missing much. He was packaged with a Collect & Connect part for Metamorpho, but mine came without the part. Metamorpho will have to be one of those C&C figures that I splurge on as my collection nears completion.

Etrigan has a face that even Jason Blood’s mother couldn’t love, and while that may be a slam against Etrigan, it’s high praise for the figure. The head sculpt is definitely up there among my favorites in the DCUC line. They really captured his scowl perfectly, along with the heavy brow and piercing red eyes. I also really dig the glossy paint, which gives him a bit of a slimy look. Is Etrigan supposed to be slimy? I don’t know, but it looks great on the figure.

Etrigan’s top half is mostly standard buck, although keep in mind, this was the first wave, so there really isn’t a standard buck yet. The combination of jagged cut sleeves and wrist cuffs give him a nice medieval look. The bare legs are sculpted with nasty demon skin and veins, right down to his little medieval booties. His whole ensemble is tied together by his ragged, blue cape. Mattel certainly nailed Etrigan’s iconic look here. Brilliant!

Of course, you get what will become the standard DCUC buck. He has ball joints in the neck and shoulders. The arms have hinged elbows and swivels in the biceps and wrists. His legs have the usual DCUC style hip joints, swivels in the thighs, and hinges in the knees and ankles. He also has the ab crunch in the torso.

And so, Etrigan joins the ranks as addition number 160-something to my DC Classics/Unlimited/Signature/Etc. shelves. He’s a great indication of the awesome figures to come in future waves and it’s nice to finally have the character represented in my collection. To celebrate, I think I’ll go watch the excellent Justice League episode, “A Knight of Shadows” and maybe even finally get around to reading some of Paul Cornell’s Demon Knight books. Tomorrow… we’ll check out some DC Direct goodness.