I warned y’all that I was backfilling my DCUC shelves and would have a number of older DC figures to feature, but not all of them are going to actually be DCUC figures. I’m at the point where I’m willing to concede that it’ll be a while before Mattel gets around to doing certain characters (if ever) and so I’m willing to incorporate some more of the DC Direct figures onto my DCUC shelves. Today we’re looking at Red Lantern Mera from the Blackest Night, Series Seven. I’ll confess, I didn’t have a burning need to have her on my shelves, but I picked up my last bunch of comic TPBs from Amazon and I’ve been feeling a little guilty about not supporting the local comic shop. So, I took a trip the day before yesterday and picked up a couple of the DCD figures he’s had on the shelves for a long while. Today, we’ll check out Mera and tomorrow we’ll look at the other one. 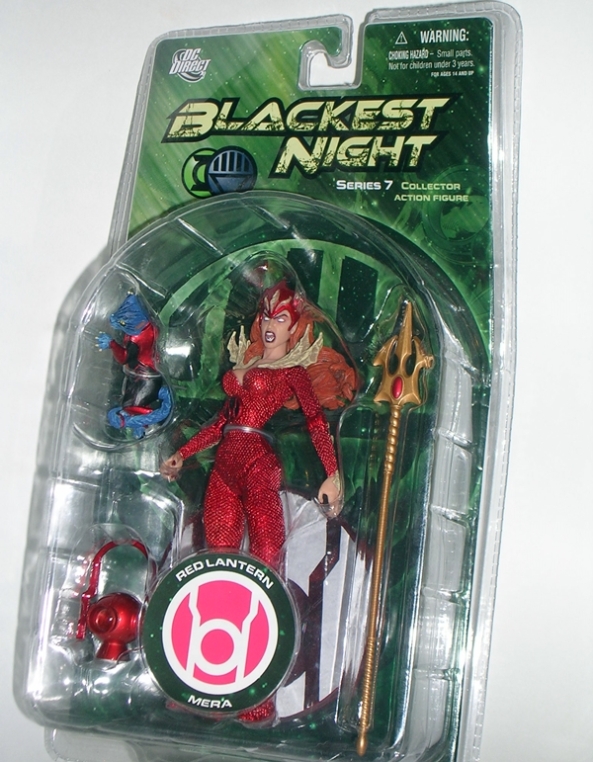 There’s the packaged shot… mine is pretty bent, but I care not! Soon, it will be ravaged by scissors! The package is the usual DCD affair with a sealed clamshell and a printed insert. The presentation is nice enough and the back panel shows the other figures in the series and little bio blurbs for all of them. Obviously, this isn’t collector friendly packaging, but it does give you a nice hit of plastic fumes when you open it.

Wow, she’s gorgeous. I mean, I’m no newcomer to DCD’s sculpts. I have a bunch of their figures, but still… Wow! Of course, I don’t mean gorgeous in the traditional sense. She’s got demon eyes and she’s clearly preparing to barf napalm right into my face, but this is really nice sculpting for a figure in this scale. Where to begin? Let’s start with the portrait: A masterful blend of beauty and evil. Beavil? Whatever you call it, I love what they did with her. Beside the great expression and free tickets to the boob show, the wild, blown hair looks fantastic and I really dig the way her briny shoulder armor frames her face. The tiara appears to be sculpted from a separate piece and sports a gorgeous metallic red paint job. Spendid! 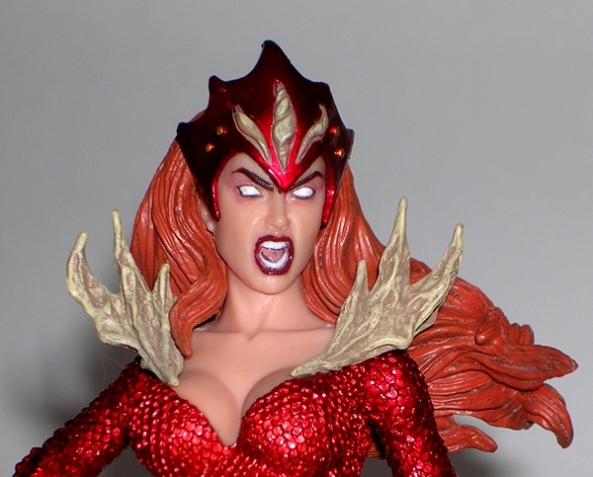 Mera is clad in skintight red scale armor, with every tiny little scale lovingly recreated. It not only looks amazing, but it gives the figure a wonderful texture when you handle it. She has red withered fins on her calves and more briny armor bits protruding from her arms and her cuffs. The outfit is topped off with a Red Lantern disc attached just under her chest. It’s a simple enough costume design, but the sculpted scales and the gorgeous red metallic finish make it appear to be so much more.

Articulation? Uh oh… here’s where the barnacle crumbles. It’s DC Direct, so you know things are going to be limited. In this case, you get ball joints in the shoulders, swivels in the hips, and hinges in the knees and elbows. Is the neck ball jointed? It seems to be, but my figure’s head won’t move, and I’m not forcing it. It seems like there isn’t much room to move with the sculpted hair anyway.  Swivels in the biceps and/or wrists would have helped a lot, especially for posing her with her trident. And speaking of her trident…

Accessories! Mera comes with a cool assortment of goodies. The trident is a nice and simple piece, and she also comes with her Red Lantern battery. And Dex-Starr! She comes with the most hate-filled cat in the universe. He’s a completely static piece and smaller than the one that came in the Green Lantern Classics 3-pack and he’s sculpted specifically to be propped up against a figure’s leg. On the other hand, the sculpt is superb. From his crazy ass expression to the little pads on his feet, the guys at DCD went all out on him, and It’s much appreciated. Mera also comes with a Red Lantern disc stand. 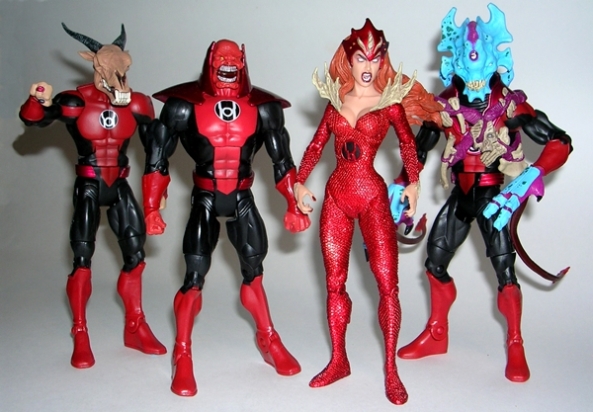 Compromise! Why does everything have to be a compromise? If only we could get this level of sculpting and paintwork on a figure with the DCUC level of articulation, it would start raining puppies and lollipops, and all would be right with the world. Sadly, that’s not likely to happen. So, she may not be well articulated… Mera is still a fantastic display piece, and while she’s just a smidge too tall (she’s a wee bit taller than my Signature Series Atrocitus), she still makes a nice compliment to my Red Lantern ranks. Tomorrow we’ll check out a character that is long overdue for the Mattel lines…  Psycho Pirate!