Hey, folks, it’s time for a look at another one of Hasbro’s “Thrilling Thirty!” to celebrate Transformers’ 30th Anniversary, and oh my God, it’s Orion Pax. YES!!! I have wanted a genuine Orion Pax figure ever since he first appeared in the episode of the original Transformers cartoon, “War Dawn.” The e-hobby repaint of Kup was a pretty cool figure and that would have done the job back in the day, but it hardly fits into my modern TF collection. The fact that I had to settle for an IDW version as opposed to a Sunbow version doesn’t really faze me, so long as the character is finally represented on my shelf. And here he is!

This being my final feature of Hasbro’s initial wave of IDW Comic Packs, we’ve already seen the packaging several times. Pax comes carded in robot form with a reprint comic on a G1 style card.  Suffice it to say, I find the presentation here perfect in every way. The comic is pretty good too. It stands on its own quite well, so if you’re like me and haven’t gotten around to reading Autocracy, it won’t count against you. There’s plenty of good action, familiar faces, and decent lines. Let’s start out with Pax’s alt mode.

While in alt mode in the comic, Pax spends most panels pulling along a trailer of Decepticon prisoners. Better get busy making that trailer, third-parties! That having been said, Hasbro did a fine job reproducing the vehicle mode here, sans trailer. Pax is a Cybertronian truck, a bit more like a pick-up truck than a semi cab, but he still looks pretty good. The deco is a mix of red and blue, traditional Optimus colors, with some silver and yellow accents. I think it’s one of the better quality decos in recent Generations releases. True there aren’t a lot of paint apps, but I genuinely don’t get the feeling of any of the paint cuts that I have from some other modern figures. The clear windshield shows an Autobot symbol as well as some of the detailing in the inner workings of the cab. 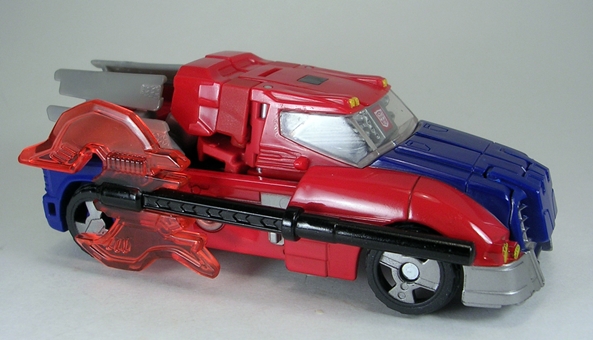 At the risk of sounding like a broken record, Pax’s alt mode is a bit small. Yup, that’s a common complaint against most modern Deluxe figures. He would work Ok as a sporty little pick-up truck, but he doesn’t look big enough to be pulling a trailer with two Decepticons in it. Prime comes with two weapons, a blaster and an energon axe and both accessories can peg into the sides of the vehicle to give him some firepower in alt mode. The blaster looks pretty good and even the axe can double as some kind of cannon if you use your imagination. 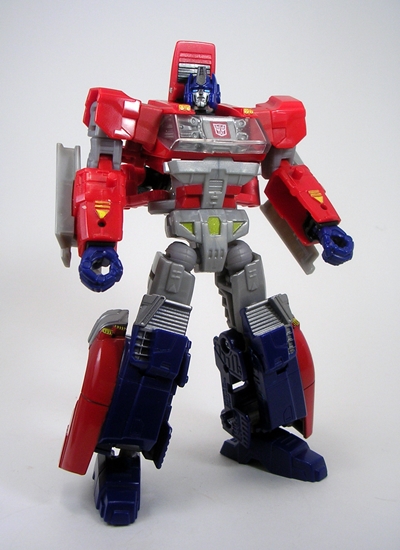 Transforming Pax is easy and pretty clever. I like the way the side panels of his alt mode fold up and pack away on his legs. His wheels stow neatly behind him and his shoulders shift forward and lock into place securely. The resulting robot mode is excellent and there are no fake outs, so the windshield in his truck mode is really his chest in robot mode. The only distraction for me is the plate that sticks up behind his head, but I’m really just looking for things to pick on at this point. The truth is he’s a very clean looking robot with great poseability.

And, yes, once again like a lot of Deluxes these days, he’s small. Now, Pax’s small size in robot mode does not bother me. Sure, he’s about the same size as the other Autobots in the comic, as Wheeljack just got him a new body. Nonetheless, to me Orion Pax should be slighter than he was as Prime and so his smaller stature in robot mode doesn’t concern me as much as his compact auto mode. On the other hand, I guess it’s hard to have it both ways, so I’ll let it slide. 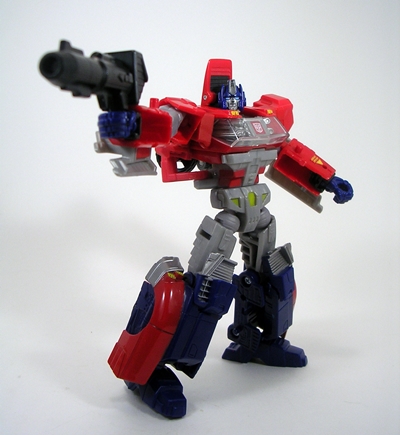 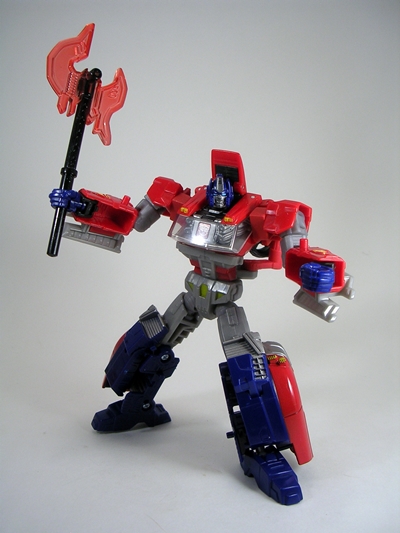 I’ve already mentioned his weapons. I absolutely love his rifle, because it finally gives us a G1-style Prime gun that can work with WFC Prime or even Classic Prime. The energon axe is pretty sweet too. 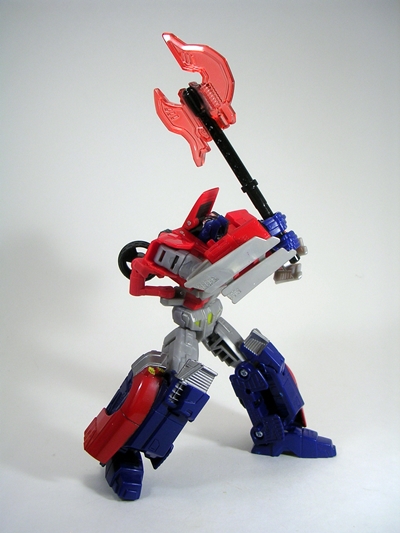 Size quibbles aside, Orion Pax is an awesome figure and probably second only to Trailcutter as my favorite in this initial crop of IDW releases. It’s been a solid wave and I’m anxiously waiting for my Thundercracker and Hoist to turn up. I’m also really pleased to see the reveals of the next wave of four, which will include Skids, Waspinator, Goldfire, and Dreadwing. Yes, indeed, there’s some great stuff coming down the pike for us Transformers fans and lately Hasbro has been showing me that it doesn’t all have to come from third parties!